You spend all that time downloading the Football Manager 2017 Beta, but when the menu screen appears for the first time, you don’t know what to do with yourself. Who do you manage? Don’t worry, Iain Macintosh has been there. And here are his five suggestions for five very different types of Football Manager challenge. 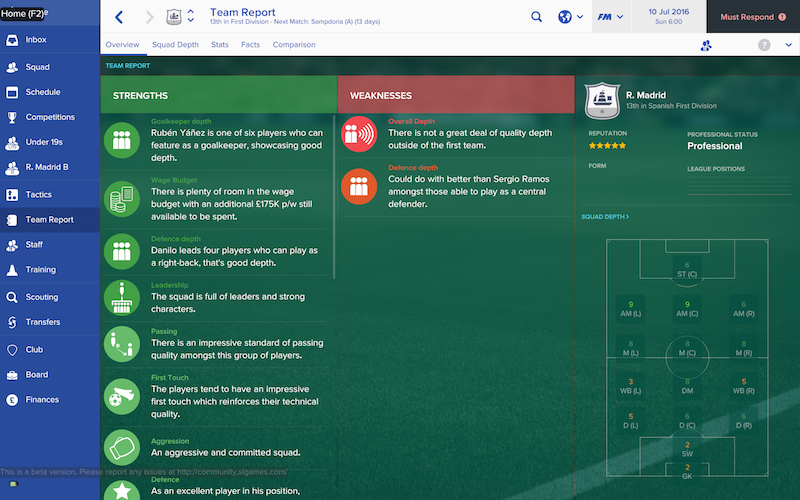 There’s no getting around the fact that starting a game of Football Manager with a team like Real Madrid is a bit like cheating. I mean, just look at those “weaknesses” listed above. Not a great deal of quality outside the first team? Is that really an issue, given the quality inside the first team?

There are a few minor issues – like getting Cristiano Ronaldo to respect you and figuring out what to do with nine senior attacking midfielders – but generally speaking, this is like starting a career in business by getting your dad to put you on the board of his multinational corporation. Unless you alter your parameters, of course.

Take over at Real Madrid, pick up the phone, call U19 manager Guti into your office and hand him a cardboard box. Then take full control of the youth team yourself. It’s about time that this Barcelona youth narrative was challenged.

Use your eye-watering resources to scour the world for young talent, then develop them yourself. Unless you fancy setting up a second manager to run the B Team, you won’t be able to do that as well, but you can at least prepare your younglings, send them to Santiago Solari’s team and then pick them up at the other end when they’re ready. Or just bypass the B team altogether. Hey, you’re the manager.

It might be a few years before you start to reap the benefits of this policy, and you do run the risk of getting sacked for finishing second, losing the Champions League final or using the wrong cutlery, but you’re building an empire. These things are not easy.

NEGATIVES: Your heart may actually break when you have to tell your kids that they’re not going to make the grade. 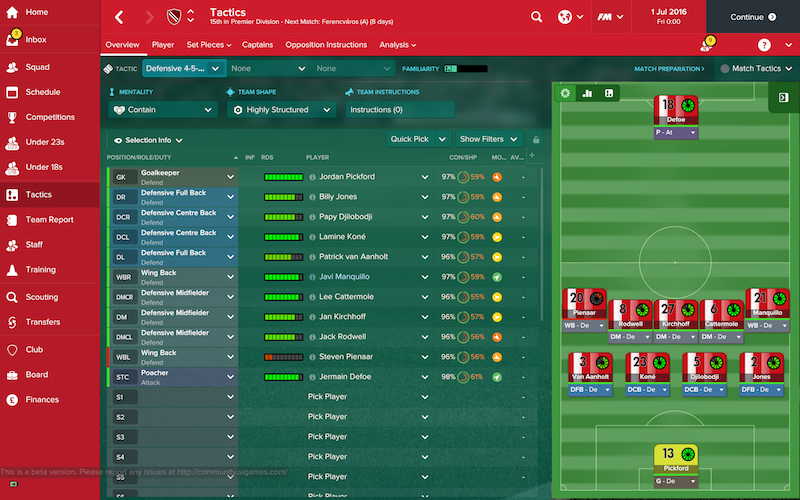 There’s a 48,000 all-seater stadium, superb training and youth facilities, and a local population that continues to buy tickets despite spending nearly a decade watching their expensively remunerated players circle the plughole. This could be a wonderful job. If only someone could replace almost all of the existing players with much, much better ones. Well, friends, that someone could be you.

It probably won’t work, of course. As David Moyes will testify, it all seems great in your head, but when you get out on the training pitch and see what you’ve been left with, your dreams will shatter like glass. But can you fix it? Perhaps some sturdy tactics will help? You can buy at least one player of quality because there’s £12m in the kitty. With all that TV money coming in, you can rebuild this football club if you can just survive the first season.

So are you brave enough? Are you good enough? You’re going to lose a lot of games right from the start. But if the board keep the faith and let you continue your work…

POSITIVES: Get this one right and then imagine yourself in the city of Sunderland. You’ll never have to buy yourself an imaginary drink again. 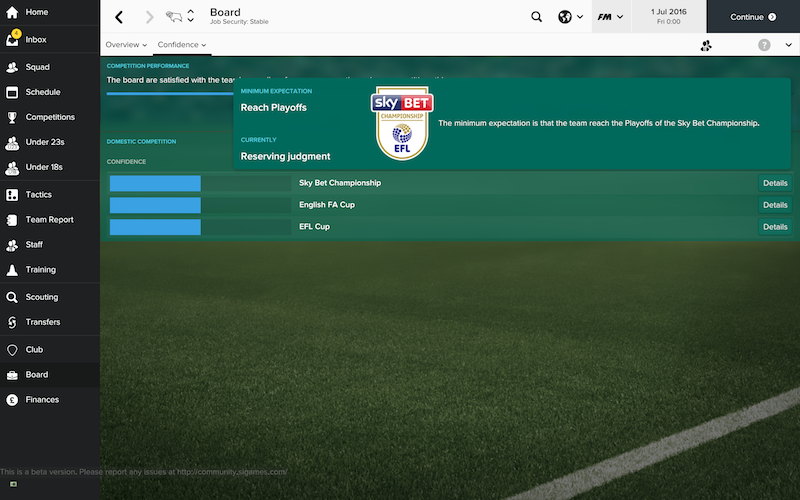 They used to say that it couldn’t be done in the 21st century. And then Leicester City were promoted, won the Premier League in their second season, and thus we had to reassess pretty much everything we thought we knew about football. So with that in mind, perhaps you should try to repeat Brian Clough’s success with Derby. Clough needed two seasons to get out of the second flight and another three to land the title. You can beat that, can’t you?

Like Sunderland, all the facilities are in place for you. The stadium is, at 33,000, a little smaller, but in an era when Premier League TV revenue outstrips ticket sales, that’s not going to be a problem. There’s also £4m in the bank for you to spend. The defence needs some reinforcement, but with players like Will Hughes, George Thorne and James Wilson (mercifully unknacked in the Beta), you’re starting from a position of strength.

All you need now is a wily assistant manager with an unparalleled eye for a player, a direct line to Michael Parkinson and an endearing disregard for authority. You’ll never be as good a football manager as Brian Clough. But you could be in the top two.

NOTE: This challenge can also be attempted at Nottingham Forest, though good luck with those owners.

POSITIVES: It’s a hard enough challenge to impress people, but achievable enough not to break your spirit.

NEGATIVES: What is the Derby way? Has anyone figured it out yet? Will you get sacked if you inaugurate some other kind of way? 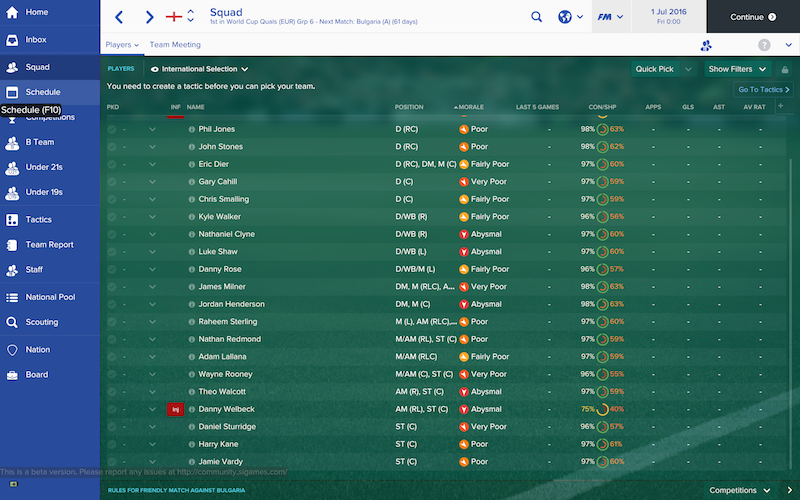 International management is always a risk in FM. There’s a strong chance that you’ll miss the day-to-day involvement, the banter with the lads, the ability to actually buy better players. But the rewards are enormous and who knows? Perhaps you can provide the stability and long-term planning that’s been lacking for so long. Just try not to speak to strange men in Chinese restaurants about bypassing third party restrictions.

Be warned, this is not a very hands-on way of playing FM. You’ll spend more time watching the computer play games than you will playing your own. Unless you repeatedly slap the continue button until the next game comes around, but then you’ll probably find yourself ploughing on to 2019, still picking Everton players because you haven’t noticed they were relegated in 2017.

But there are rewards for those who are prepared to lay down the hours. By managing the U21 and U19 sides, you can inaugurate an Oscar Tabarez era of logical progression through the age levels. And if you’re actually scouring the game for promising 17-year-old English players, think of how knowledgeable you’re going to seem when they blossom in real life and you know all about them. Finally, if you do win the World Cup, well…won’t that look good on your CV? You can get a proper job. 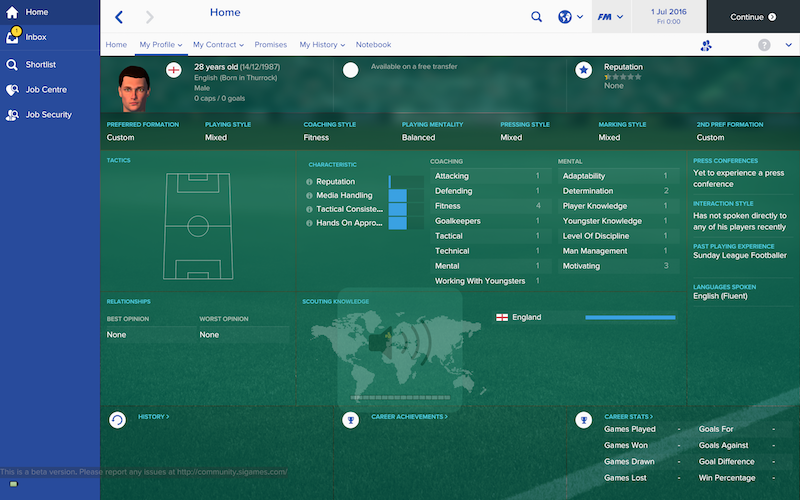 One of the greatest football managers of the late 20th century was a shoe salesman who refused to accept his lot in life. Arrigo Sacchi went from the foothills of the amateur scene to the heights of back-to-back European Cups with AC Milan. Can you replicate his progress? Probably not. But it’s more of a challenge than just managing Barcelona, isn’t it?

Start with no qualifications and a Sunday League playing career. For a slight advantage, try to “specialise” in something like fitness training. It’s better to be barely competent at one thing than hopeless at everything.

On the Beta version, this will be enough to earn interviews with Bishop’s Stortford and Weston-Super-Mare. As long as you don’t demand a new stadium or a youth academy from the owner, you should get the job. That’s the easy bit. Everything else is a nightmare. You need to scout your bum off because the only player attributes you’ll know will be your own. Take all the qualifications you can as they’ll increase your stats, at the affordable cost of diminishing your already pitiful influence on the training field.

Don’t kid yourself that you’re five good seasons away from the Premier League. It might take you five years just to get out of the division. This is a long, slow and initially unrewarding way of playing. But by thunder, if you get this one right…

NEGATIVES: The overwhelming difficulty of this sort of FM game will consume you and you’ll never be happy again.

All screenshots for this feature were taken from the Beta version of Football Manager 2017. the completed version, released on November 4, may look very different. Find out more on the Football Manager website.