@thesetpieces how can u be this shite at CM @iainmacintosh ? Did u use a ghostwriter for your book? ??⚽

None of that will bring our Champions League place back. We have to accept what happened and move on. I know that many of you would prefer it if I moved on. But I still believe and I hope you do too. I think that a few alterations here and there could be the difference. I really think we can win something in 2006/07.

The first thing we need to do is to assess the damage. What do we need and how much do we need it? We’ll probably have around £12-£15m to spend so, as is the case every year, it’s not as simple as just buying good players. We can only buy a few. So where do we need them? 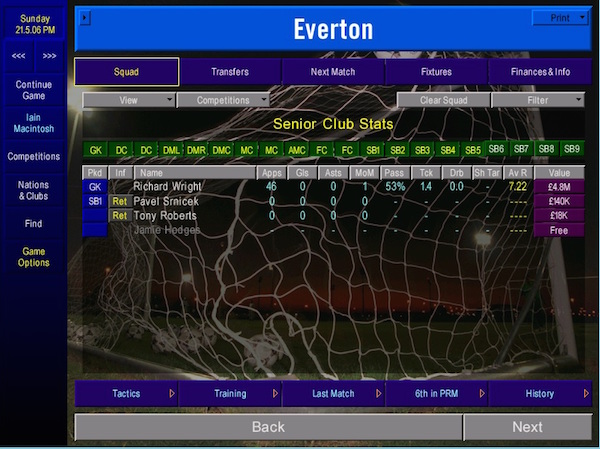 Richard Wright’s wobble cost us dearly in March, but no more so than the strikers and their inability to finish. At 7.22, he was actually the third-highest performing goalkeeper in the league. We could upgrade him, certainly. But there are other areas that we need to sort out first. However, with both Pavel Srnicek and Tony Roberts retiring, we need back-up urgently. 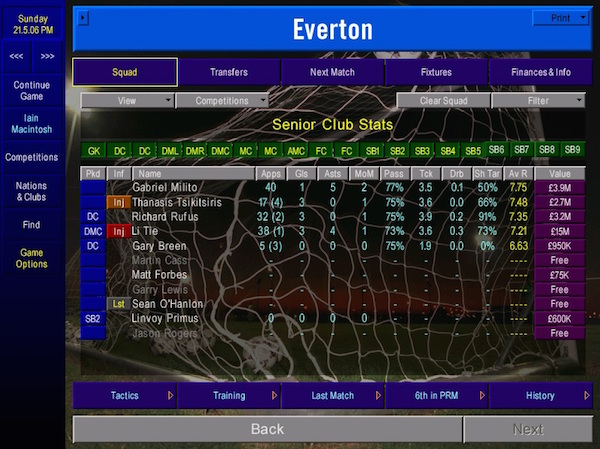 Our strongest department is the centre of defence. Gabriel Milito was the bargain of the century at £5.5m and is already one of the best players in the league. It would have been nice not to lose him for the run-in through an unprovoked assault on Patrick Berger, but life can’t be perfect. Alongside him, Thanasis Tsikitsiris has come of age. They’re both left footed, which could be an issue, but we’ll see how they fare. We have Richard Rufus and Gary Breen behind them and, in a tight spot, Linvoy Primus and Matt Forbes. So let’s hope we don’t end up in a tight spot. 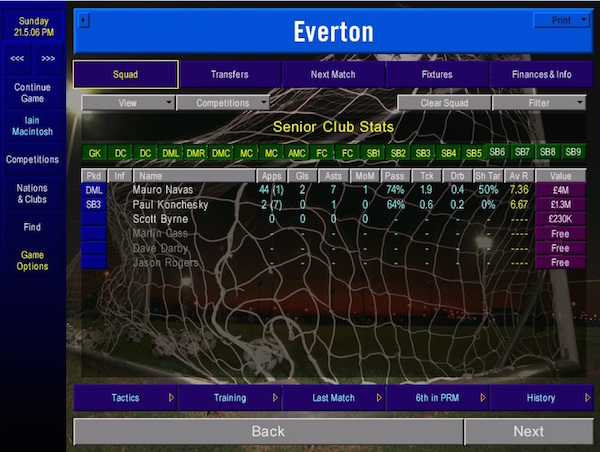 There were a number of obvious lows last season, but we did pretty well in the transfer market. Mauro Navas was a consistent high performer and, at 31, I think he’s still got a season or two left in him. We will need back-up though because I am just about sick of Paul Konchesky’s face. 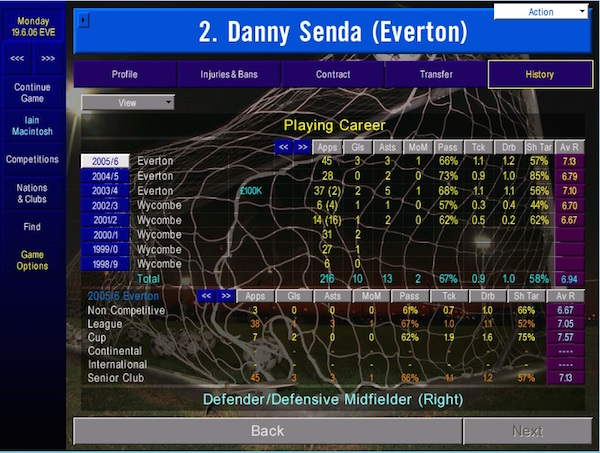 I like Danny Senda, I really do. He’s a decent performer and he’s done well for us. But he’s not Champions League class and I don’t think he ever will be. I’m going to need someone better there if we’re going to push on. But he can stay at the club. I’m not going to sanction the sale of Tony Hibbert though. His contract expires this summer and I’ll do all I can to keep him around in the reserves. I think his can’t-do-but-will-try-really-hard-anyway attitude is just what the kids need to see. 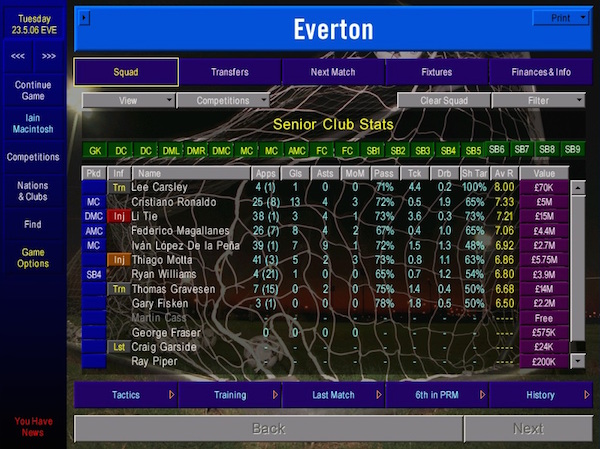 Central midfield is a serious concern. Neither Ivan de la Peña nor Thiago Motta performed well enough and, while that’s understandable given that it was their first season in England, attention must be paid to this area of the pitch. We’re losing Lee Carsley and Thomas Gravesen this summer. We need one first class midfielder, one covering midfielder and a youngster. Because, frankly, I’m not sure Gary Fisken is going to win us the title. 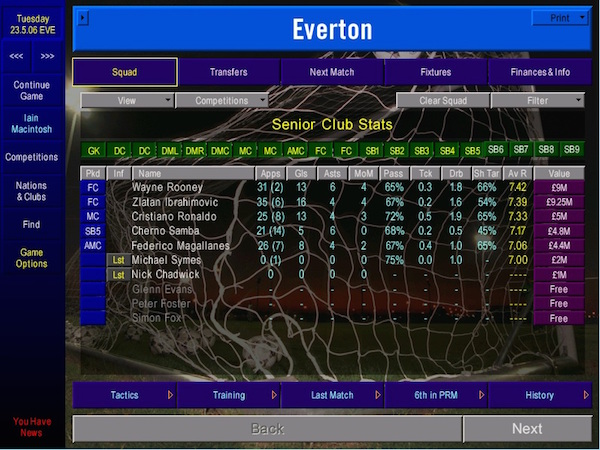 And now the juiciest bone of contention. What do we do up front? Zlatan led the way with 16 goals, but I’d expect more than that from 35 starts. Wayne Rooney weighed in with 13 and six assists, which is okay, but okay isn’t good enough. Cherno Samba’s five goals is disgraceful. Thank heavens for Cristiano Ronaldo and Federico Magallanes, who both outscored him. Another striker will be signed and then the three existing forwards can fight for their position. 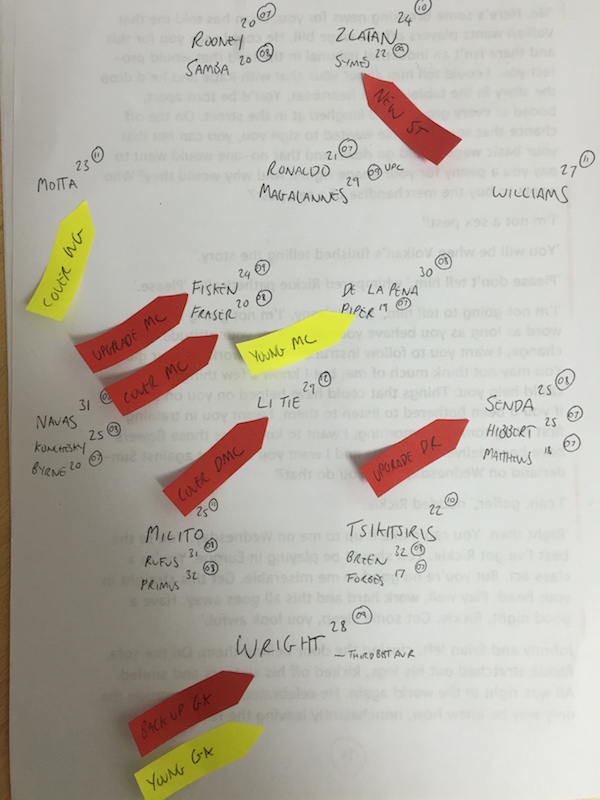 So there are a lot of red markers on the worksheet this year and a lot of business needs to be done. You’ll notice that I’ve put 13 positions down here. It’s not a revolutionary new tactic, it’s my desire to be versatile. I want to be able to play with wingers if necessary. Ryan Williams and Motta, who is marked as AMLC, might do better out there. 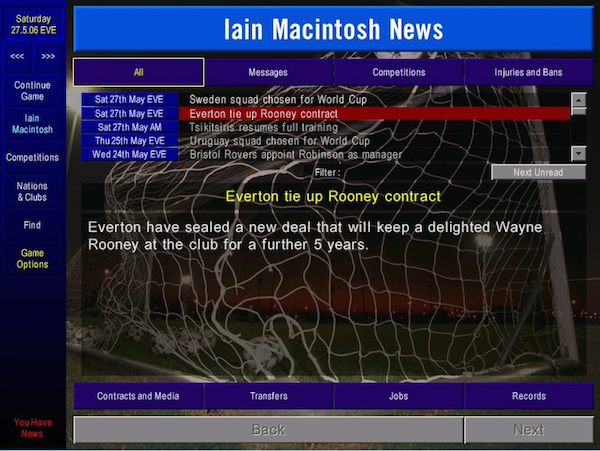 Of course, there’s no point allowing our players’ contracts to run down yet. Rooney has value, so I want him secured for as long as possible. If he is the one striker to fall short, at least we’ll get big bucks for him. And maybe he just needs a pay rise to enliven him. 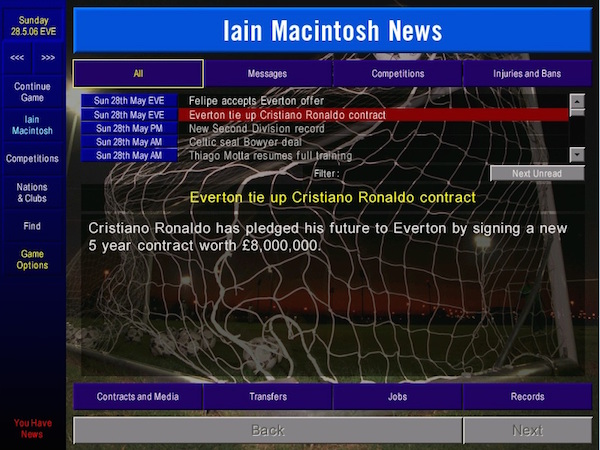 Ronaldo is locked down too. There were some doubts about his abilities earlier in the season, but I think he did more than enough during the run-in to earn this new deal. And again, if he flops, we’ll make lots of money on him. 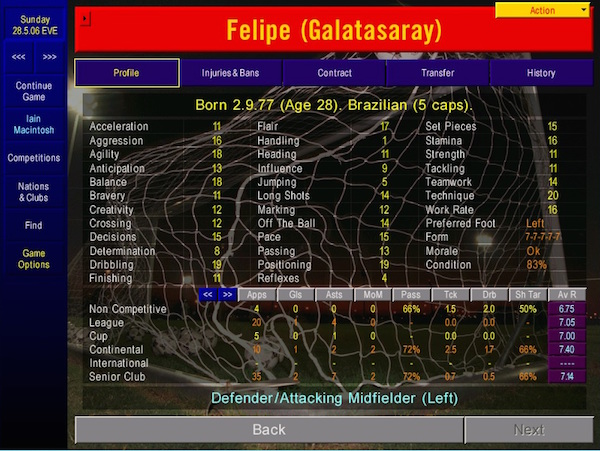 The first of the new signings is this chap, a ludicrously gifted Brazilian who can either cover for Mauro Navas or allow him to play on the right, which is actually his preferred position. Felipe can also play off the wing, so he covers a lot of bases. And he was free. I like free. 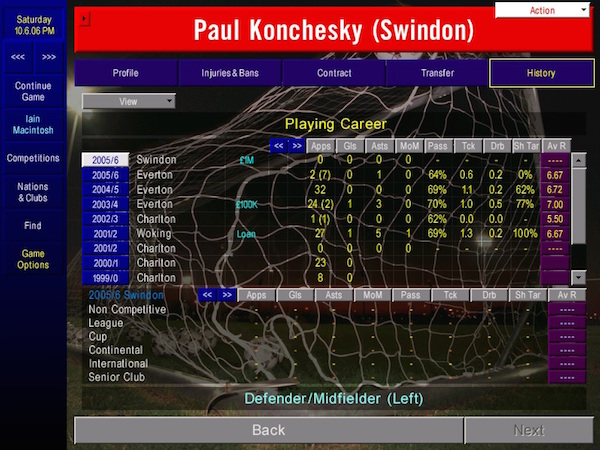 It also means that I can boot Konchesky out of the door. He was actually quite good in his first season, but never really replicated that form after the summer of 2004. Still, we’ve brought in ten times as much as he cost, so on those grounds alone he’s been a resounding success. 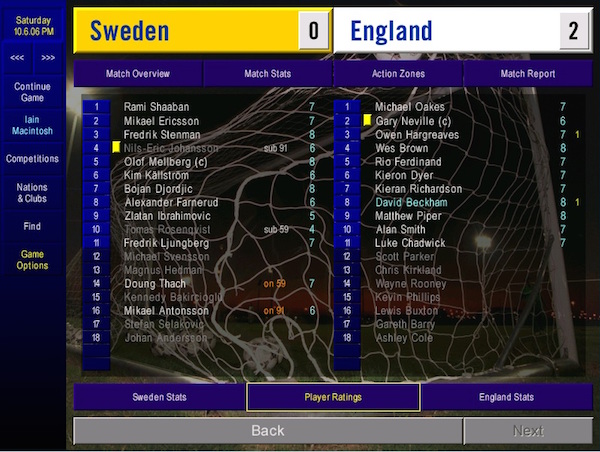 And finally, we have news of Trevor Francis’ England team, currently contesting the World Cup in Germany. And contesting it quite well too. Especially David Beckham. An encouraging 2-0 victory over Sweden (Zlatan was appalling) was followed up with an unfortunate draw against Paraguay that appears to owe much to their goalkeeper. I feel your pain, Trev. I feel your pain. 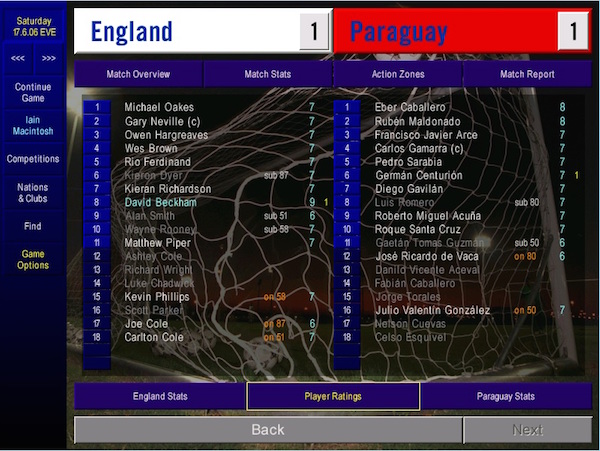