With seven points from nine, there’s no doubt that we have made an excellent start to the season. Perhaps more importantly, we’ve lifted the mood of the supporters too. Signing Thiago Motta and Ivan de la Peña was one thing, but the capture of Gabriel Milito has got everyone completely over-excited.

@thesetpieces @iainmacintosh I can feel the optimism in the air. This is it, this is the year.

But we mustn’t get ahead of ourselves. We’ve only won the games we were supposed to win. This month, we face Manchester United, Newcastle and Arsenal, three of the strongest teams in the division. If we can get through this with similar success, then it will be time to mount a serious search for the key to the trophy cabinet. They were last seen in Joe Royle’s top drawer, but that really was a very long time ago.

So let’s see how we do against John Toshack’s Manchester United. He’s not been afraid to make sweeping changes at Old Trafford. He’s using the same 3-5-2 formation that we like, he’s bought Andres D’Alessandro to make it tick and he’s won two of his first three games. So let’s see who can work this shape the best. 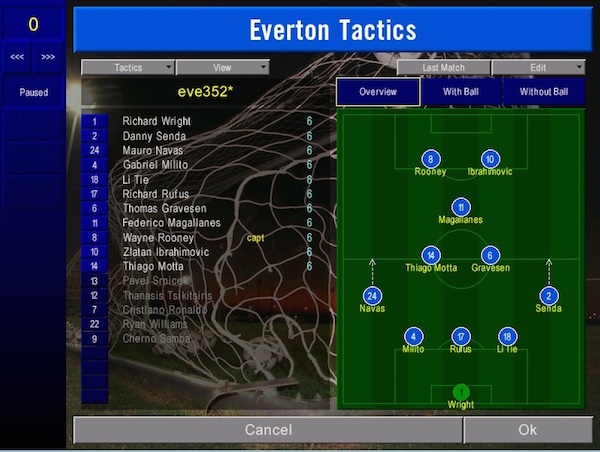 Well, that’s a sobering experience. And it feels very unfair. United came out in a defensive formation with men behind the ball and we dominated the first 20 minutes. Then they scored with their first chance and, two minutes later, with their second chance too. A third shot on target brought a third goal and we were done by half time. I am not impressed with Richard Wright.  In the last half hour, there was nothing else to do but experiment. I’ve noticed that Cristiano Ronaldo has been playing central midfield for Portugal’s U21 side, so I gave him 30 minutes there, Ryan Williams had a crack behind the strikers and there was another fleeting glimpse of Cherno Samba. But it all came to nothing. We made 12 chances against United in 90 minutes, which is something I doubt we’ve ever done. But we only put five on target. They were three for three. And that’s the difference. 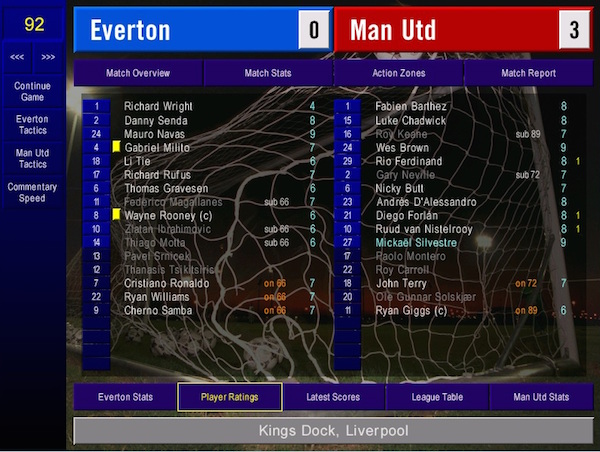 And next up we have a trip to St James Park, so we can’t sit around and feel sorry for ourselves. Newcastle are also practitioners of the 3-5-2 and they now have Paul Scholes in the hole. This will not be easy. Thanks heavens then that De la Peña has returned from injury. We’ll need his help. 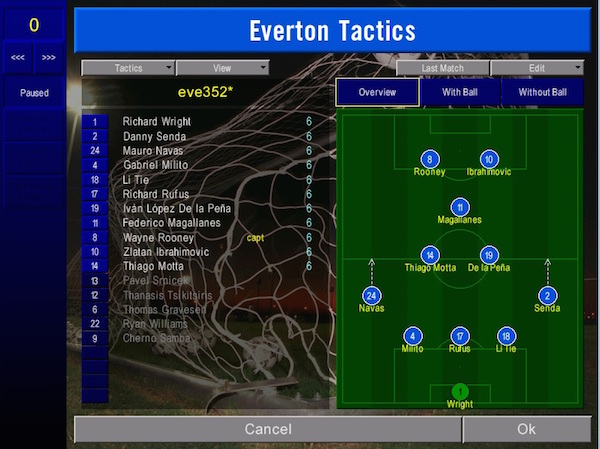 That’s more like it, but what a contest this was. When Zlatan had a shot cleared off the line in the fourth minute and Jason Koumas scampered down the other end to give Newcastle the lead, I had that old familiar sinking feeling. But Wright made up for his poor performance against United and held the Magpies at bay as our faith wavered. Milito put Carl Cort in his pocket, but it took me far longer than it should have done to realise that Zissis Vryzas (Strength 20, Jumping 19, Heading 16) might be the reason that Newcastle were peppering our goal with so many headers. When I shuffled my pack and marked the big Greek striker with his compatriot Thanasis Tsikitsiris (Strength 20, Jumping 19, Heading 19), it was like turning off a tap. Danny Senda scored the equaliser, De la Peña put us in front and Motta gave us a flattering cushion. Having outplayed Manchester United and taken a beating, I am absolutely fine with riding our luck and then punishing Newcastle on the break. 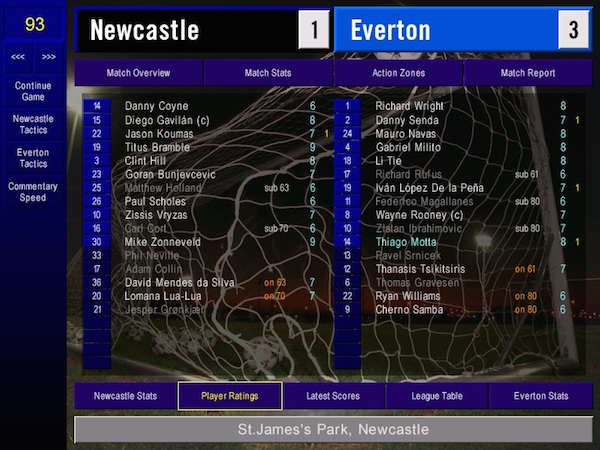 I like to use fringe players for the early rounds of the League Cup, but you know, I think that might be why we’ve never experienced the later rounds of the League Cup. To hell with squad rotation. They can rest when they’re injured. Besides, we have Ipswich away and they put us out of this competition on penalties four years ago. I want revenge. There will be only two changes. We’ll try Tsikitsiris in that problem middle-of-the-defence role that Richard Rufus has struggled to perform. He can push up and use his passing ability to help out. We’ll also drop the disappointing Federico Magallanes for Cristiano Ronaldo. So this is hardly a weakened team. 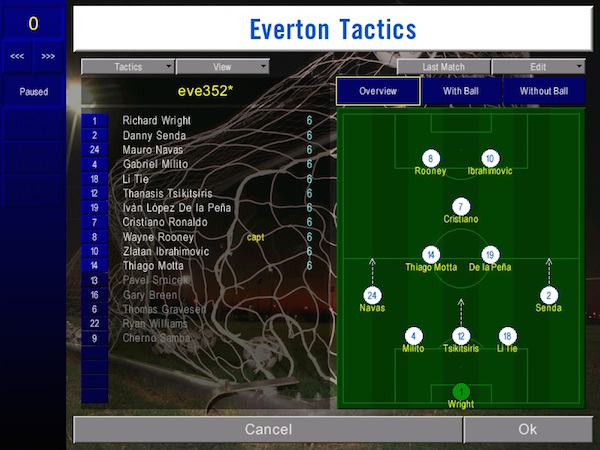 Another flicker of fear, but a short-lived one this time. Martijn Reuser gives Ipswich a very early lead, but it lasts for just three minutes. Ronaldo is having the time of his life playing against a 4-4-2 and finding all the room in the world between the lines. He equalises and then goes on to ravage the Tractor Boys before goals from Rooney and Zlatan confirm the result. There are a few concerns though. Tsikitsiris struggles. With Li Tie and Milito man-marking the two Ipswich strikers, he’s an unnecessary third wheel and his influence on the game is minimal, even with that instruction to push up and make use of his passing ability. And then he gets injured in the last minute. But I can live with issues like this. We’ve had worse. 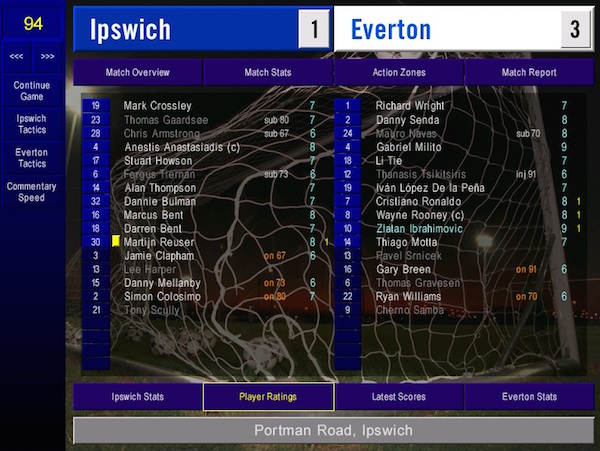 We’re going to make a few subtle changes for the clash with Arsenal. We’ve always been punished by Thierry Henry’s pace (though given that he’s scored 98 goals in four-and-a-bit seasons, we’re not the only ones) and so we’re going to use Richard Rufus in a deeper role in the middle of the defence. We’ve also lost Rooney, so we’ll use this as an opportunity to tinker with the strikers. We’ve tended to have them as a straight partnership, but we’ll ‘Dalglish/Rush’ them now, if you’ll excuse the invocation of that awful lot in red. Zlatan will now have a free role, while Cherno Samba will be encouraged to run with the ball. 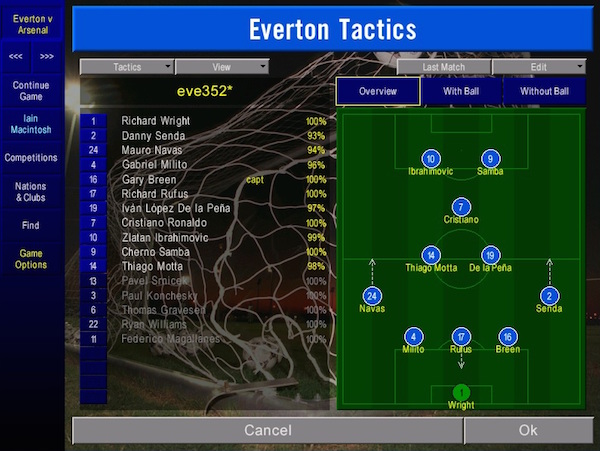 I will take this. We were marginally the better side, though not by any means perfect. We made more chances, we made better chances and it felt like we weren’t getting much from the referee. We didn’t entirely solve the middle-of-the-defence problem, but the fact that Henry was limited to two shots, both off target, suggests that while individual ratings are suffering, the team benefits. Milito has settled quickly, Zlatan is scoring freely and Mauro Navas’s consistency on the left should not go unnoticed. 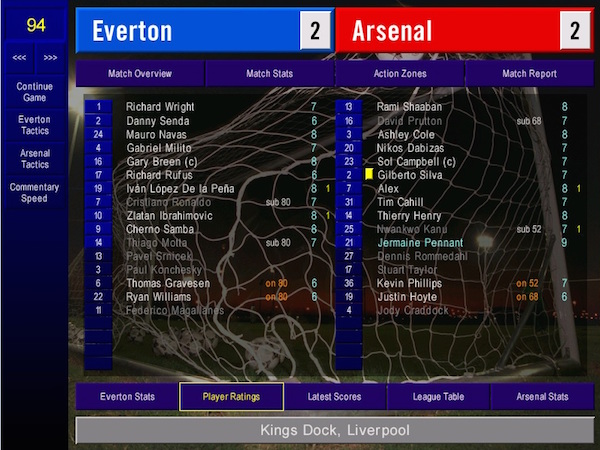 But most of all, we have come through a month where we have been pitted against the best the Premier League has to offer, and we have held our own. We deserve more than four points, but it is enough to know that we are now competitive, both at home and away. Next month, we go to Anfield. Dirty old, smelly old Anfield. Next month, I expect to conquer them at last. 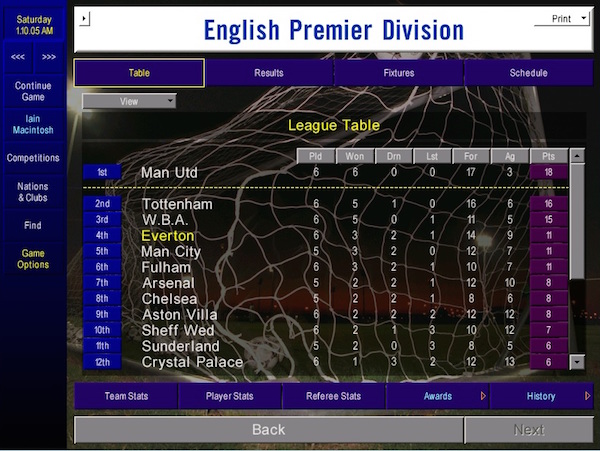 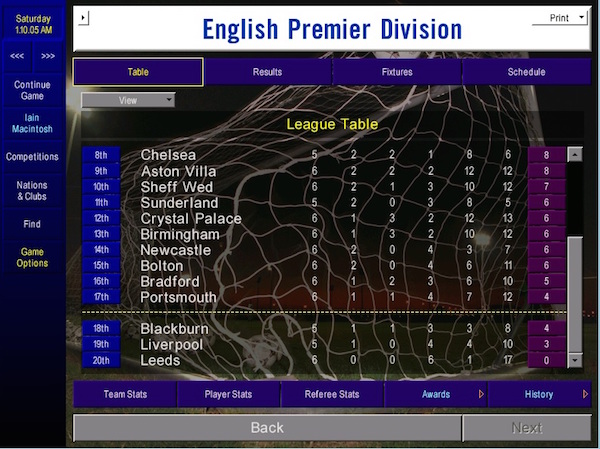