This glorious new era has been anything but glorious so far. Three games, just the one win and a big, shiny stadium that we can’t fill. As anti-climaxes go, this is straying into Shevechenko at Chelsea territory. And it’s not going to get easier this month.

We open against Leeds United. They are always tough opposition, but they have very little to show for their consistent strength. After three years under Terry Venables they’ve only won the UEFA Cup and that was back in 2002. They always finish in the top six, they always have goals in them, but they can never quite kick on.

We need to kick on too. Four points from the first three games is absolutely average and we should be a bit more than that now. It’s at home and we need to take the initiative. Gary Fisken, my £700,000 steal from Barnet, returns to the midfield and it’s a final game for Pavel Srnicek before the return of Richard Wright from lengthy four game suspension. 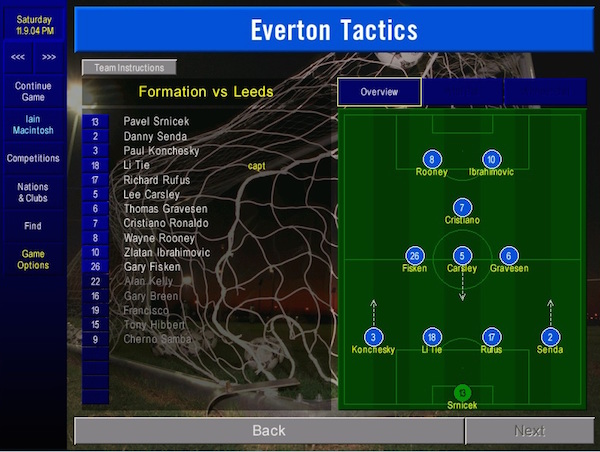 I have never seen anything like it in my life. Not in real life, not in this odd alternative life and not on any incarnation of this game. To say that we dominate the game barely begins to cover it. To explain how we didn’t win the game is beyond me. Leeds start in defensive formation with their tackling set to ‘Bremner.’ That gives us the advantage and we dominate. Then Alan Smith gets himself sent off and we have an even bigger advantage. Three minutes before half-time, Harry Kewell joins him in the bath and we’re up against nine men, laid out in a 4-4-0 formation. Except that we’re not. We’re up against eight men and one superman in the form of Paul Robinson. I try everything, increasing the strikers, going direct, going long, playing the last ten minutes in a 2-4-4, but nothing works. He stops EVERYTHING. I’m not even mad, that’s amazing. I’m a little upset to lose Zlatan for a month to injury though. That wasn’t in the brochure. 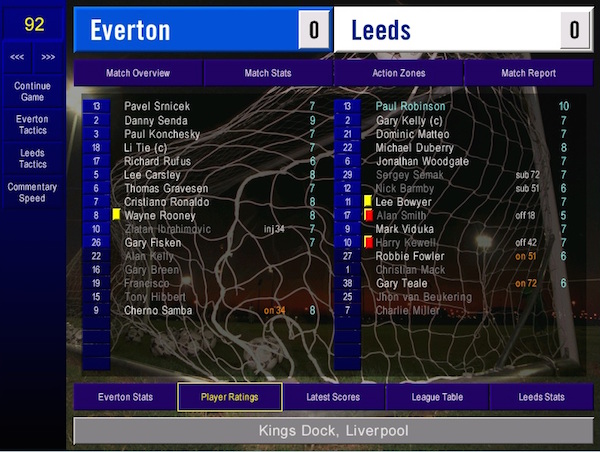 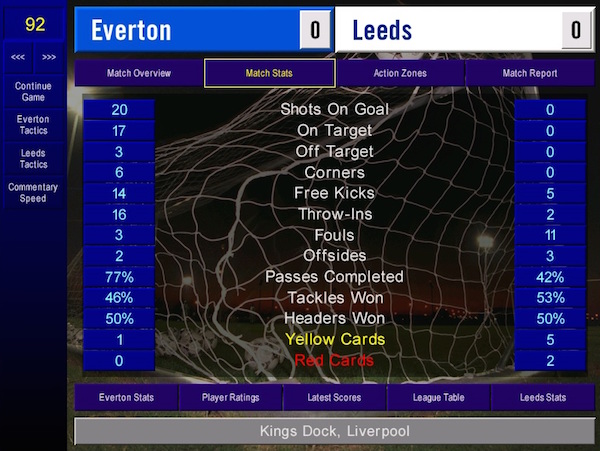 We need a response against Aston Villa and I think we’ve got a chance. Glenn Hoddle is feeling the pressure after a winless start to the season and you can understand why. Like us last season, he insists on giving it the full attacking 3-5-2 away from home. We learned to our cost how reckless that can be and, given his foolishness, we’ll switch back to it ourselves. If they’re going to leave room, we may as well exploit it. Richard Wright is back. Cristiano Ronaldo keeps his place in the hole, Kwame Ayew returns to the front line and Alan Stubbs makes a rare appearance in defence, which probably upsets Gary Breen, but I need his influence. 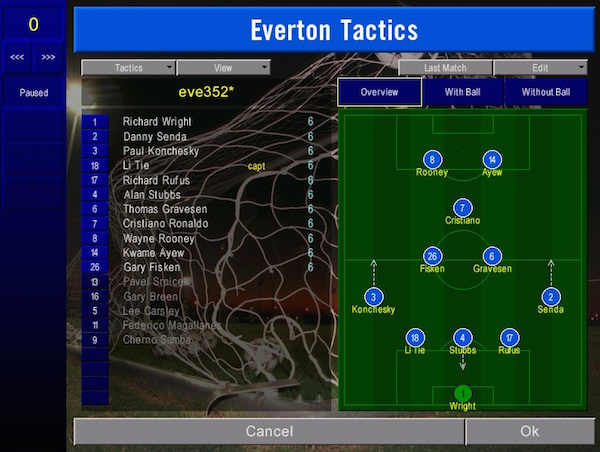 Yes, that’s the stuff. That’s how we do it. Ronaldo takes the initiative, running at the Villa defence relentlessly, scoring a fine solo effort and then making another for Gary Fisken. We’re two goals to the good after 24 minutes, but for some reason we tail off and we’re indebted to Wright for a number of good saves. We get 46,000 through the door this time, which is better, but still some way short of the 55,000 capacity. Is it the pricing policy? Is there a button I can press to sort this out? We can’t even have a supporter walk-out if they’re not walking in to start with. 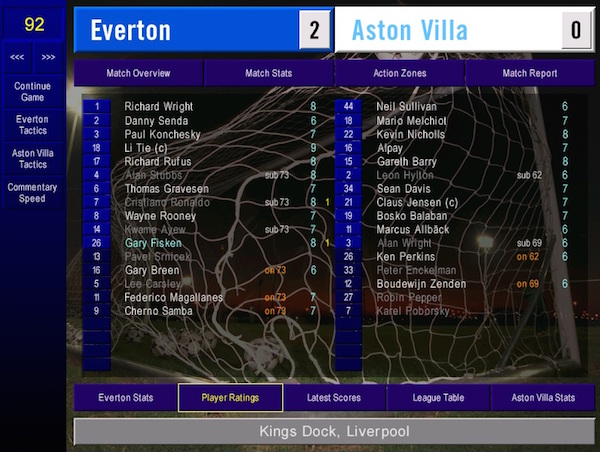 I get a call. It’s from Blackpool boss Phil Stant. He’s bottom of the third division and he needs a striker. He wants Duncan Ferguson. I stay as calm as I can, trying to regulate my breathing. I don’t want to fuck this up. Phil wants to know if he can have Duncan for free. Duncan is in the final year of a £27,000 contract and he has only made one start for me in three-and-a-bit years. Of course he can have him for free. 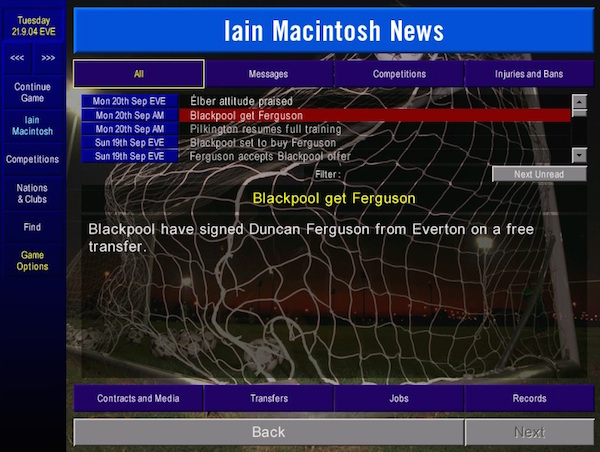 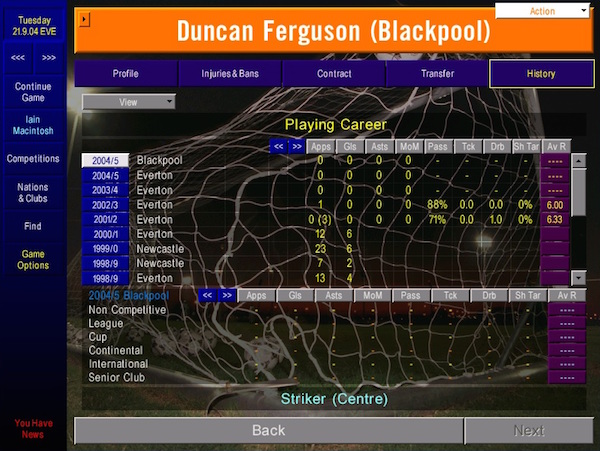 I feel a sense of lightness in my soul. As if a kindly and hitherto unknown uncle has swept in and paid off a looming credit card debt. He is gone. He is gone. Light the beacons, for he is gone. Our total wage bill just came down by 7%. He was the one relic of the madness that nearly destroyed the club and he is gone. Now we move on. We move on to glory and to silverware. The League Cup is our first chance to complete the quest and we’ve been given a nice, comfortable home draw against fourth division Chesterfield. With that in mind, I leave the attacking 3-5-2 in place, rotate the full backs, throw Gary Breen in for a debut, leave Wayne Rooney out and give Francisco and Redondo a game in the middle. Best to stay fresh. 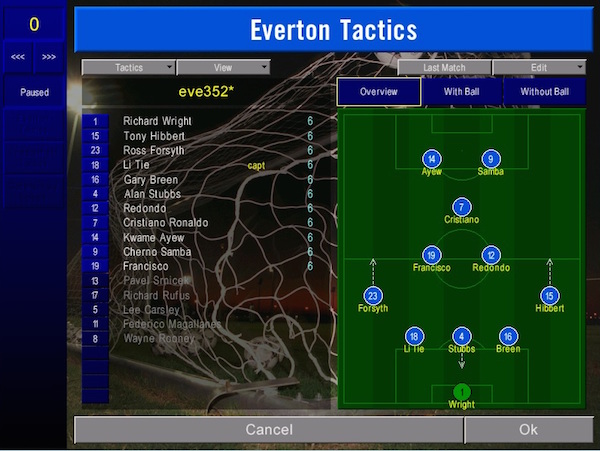 Eleven shots on target and Jussi Jaaskelainen saves ten of them. Cristiano Ronaldo in the form of his life and it’s not enough to beat Chesterfield. Gary Breen and Tony Hibbert going through the motions. Redondo being exhausted after an hour. Hopes and dreams piled up upon a funeral pyre, doused in petrol and set ablaze, the flames leaping high into the air as I stand in the smoke and the tears roll silently down my cheeks. 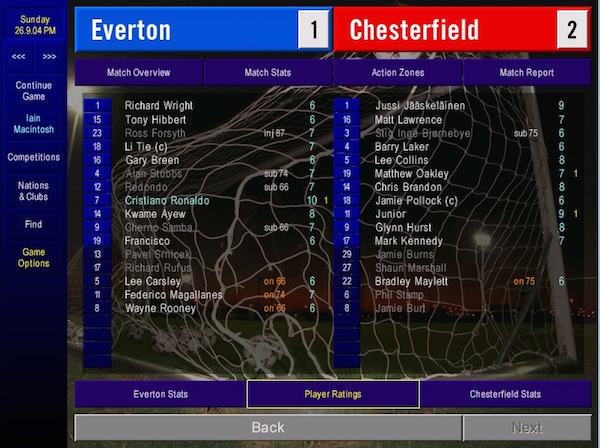 Newcastle have made an excellent start to the season, or at least they had until they lost to Leeds and crashed out of the cup to Luton. Martin O’Neill has spent big, but he’s spent well and they’re going to be a real challenge. It’s back to the more resilient 4-3-1-2 for us with a number of fringe players being ignored and isolated after their failure against Chesterfield. I don’t forget stuff like that. Bring back the old guard. Bring back Lee Carsley. 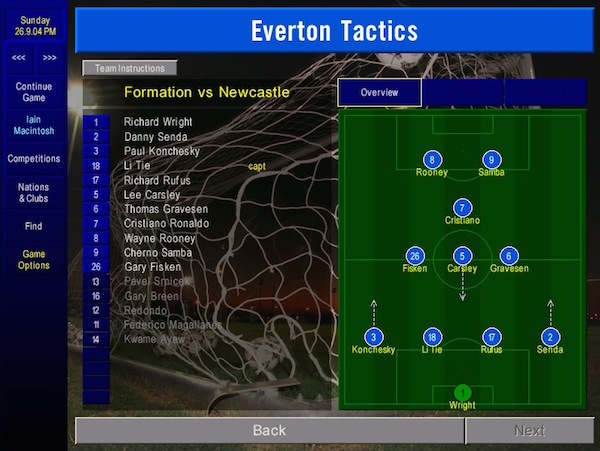 Sigh. Even Carsley couldn’t save us. Wayne Rooney opened the scoring in the eighth minute and for a short time it seemed as though our new, cautious formation had done the trick. But Newcastle bested us. They just had too much talent on the pitch, particularly the magnificent Zissis Vryzas. We never stood a chance and certainly didn’t when Thomas Gravesen was sent off after the hour. 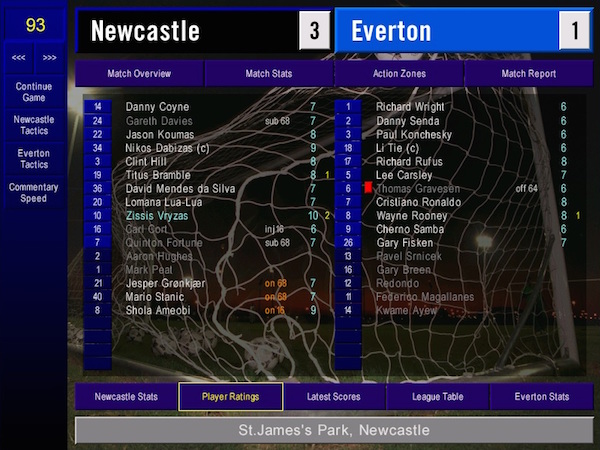 And so in this, the most exciting season of all, we have made the most mundane of starts. Two wins, two draw, two defeats. It’s not what we hoped for. Perhaps better fortune awaits us in October. It has been a disappointing month, but when we seek light in the darkness we can at least console ourselves with the knowledge that we are no longer paying £108,000 a month for Duncan Ferguson not to turn up to training. 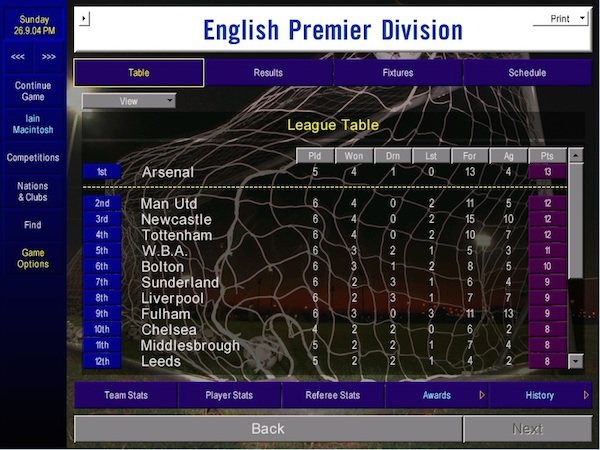 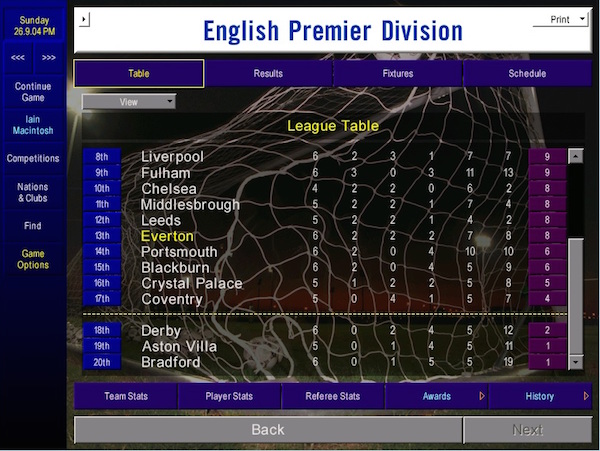