It’s clear out time. Today, we say farewell to a host of absolutely wretched youth players who have hung around like a vegan’s fart since day one. Begone, Robert Southern, Craig Penman, Joseph Jones, Franklyn Colbeck and Anthony Gerrard. You never even came close to my team, but I couldn’t afford to pay you off until now. You will be replaced by a host of free transfers, as recommended by my youth scouts.

But there are bigger names to scrub from the roster this summer. After much thought and stiffening of lip, I transfer list Kwame Ayew, Redondo, Nick Chadwick and Michael Symes, all men who have served me well, if only in sporadic patches. They will be joined on Washout Lane by the three bad buys, Kiki Musampa, Claus Jorgensen and Carlos Edwards, as well as Craig Garside and Sean O’Hanlen, whose contracts are so long that I can’t risk sacking them for fear of angering the board.

Now, you remember those three bad buys and how awful they were and how awful I was and how it was wrecking the club and how cats and dogs were living together because I’d signed them for a combined total of £750,000? What was I thinking? 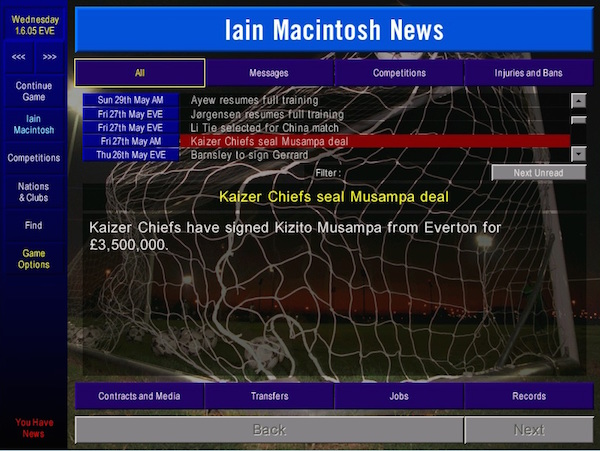 So, let’s see what we’ve got left. It wasn’t Richard Wright’s finest season, but he’s only 27 and, although I am alarmed by his work rate of ‘1’, he’s hardly the weakest link in a fence that we can’t afford to completely replace. He can stay, and so too can Pavel Srnicek and Alan Kelly. We do need a young goalkeeper though, so we’ll keep an eye out for one of those. 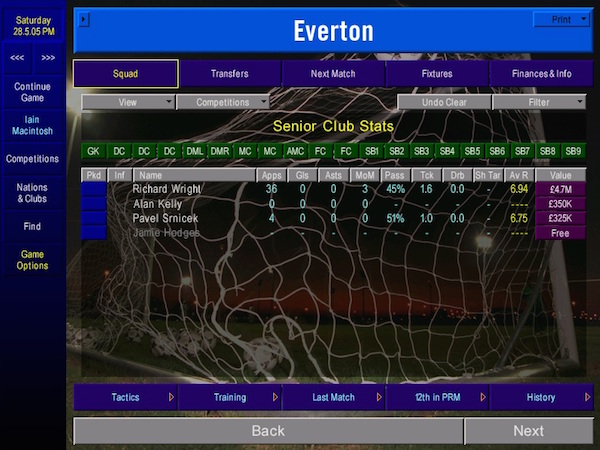 It’s clear that we have an issue at left wingback. Paul Konchesky didn’t deliver a single assist all season and at 6.72, he’s just not offering enough. Ross Forsyth had a few chances to depose him, but didn’t take any of them. Scott Byrne is young and has done nothing in the reserves to prove his worth. We need a vast improvement here. 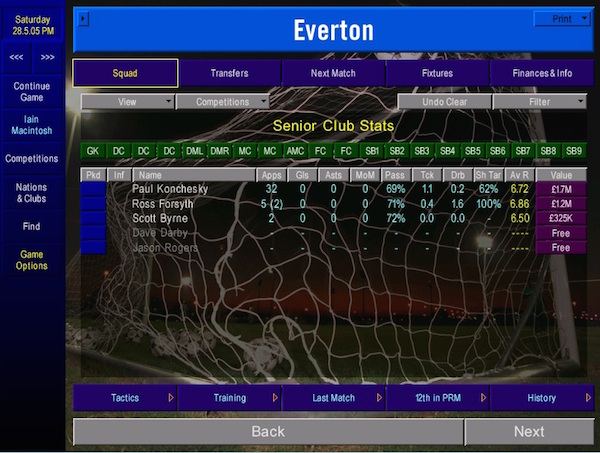 The situation is a little less bleak on the other side, but not by much. Danny Senda is close to being at the level I would expect of a top half Premier League wingback, but he’s not there yet. Tony Hibbert hasn’t done enough to displace him, but if he leaves, I riot. We need an upgrade here, but it’s not as crucial as the upgrade on the left. Not least because of what’s happening in the centre. 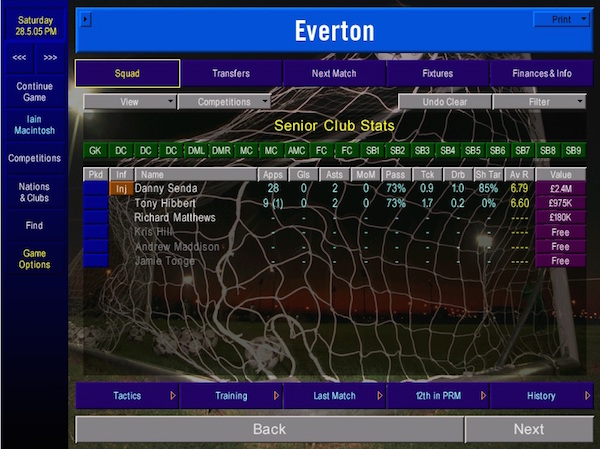 We have short term and long term issues at the back. In the short term, we’re very low on numbers. Alan Stubbs’ contract will expire soon and I won’t be renewing it. That leaves three men and a child. And those men are starting to reach the end. Gary Breen, who began badly but picked up after Christmas, has possibly two more years in him, Richard Rufus has three. We need two youngish defenders who can play first team football. We also need one or two youngsters, just in case. 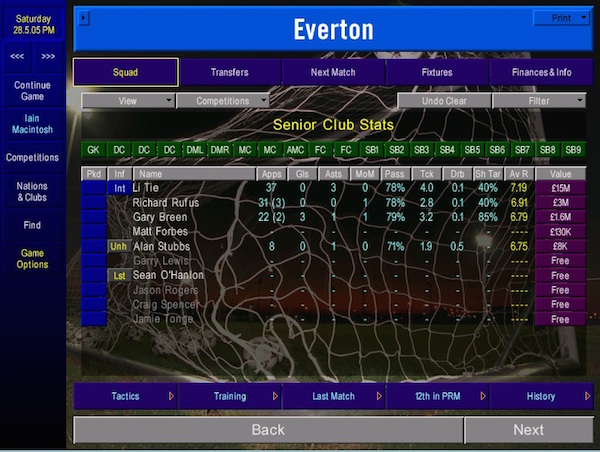 The midfield should have been overhauled last summer, but I was too busy shaking Zlatan Ibrahimovic’s hand. Thomas Gravesen improved in the second half of the season, but he’s the only one who reached the bare minimum of expectations. Gary Fisken wasn’t bad, but should only be considered back-up. Lee Carsley was really poor, so the same goes for him now too. That opens up a big vacancy. We need a real all-rounder, a Captain Marvel, someone who can pass, tackle and shoot and the sort of chap you’d follow over the top when the whistle blew. 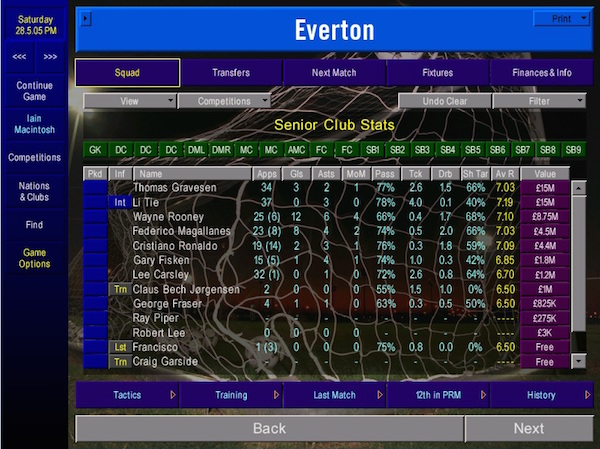 In the forward triangle, we’re nearly perfect. Though performances haven’t always backed that thinking. Cristiano Ronaldo and Federico Magallanes gave bursts of greatness, but both suffered long spells of poor form. However, it would be silly to dispose of either of them. Up top, Wayne Rooney started well and then tailed off, while Zlatan Ibrahimovic always played well, but didn’t score anywhere near enough. Cherno Samba, the most inexperienced of the three, performed well, given that he spent a third of his time on the bench. We do have a gap for a striker, though resources are best spent elsewhere. With this in mind, it will be a wildcard signing, someone cheap, but promising. 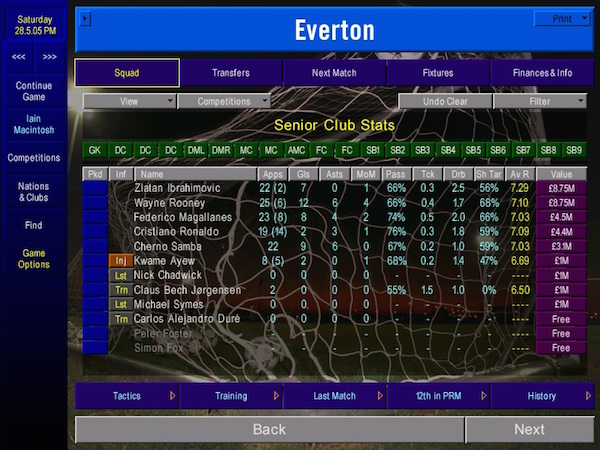 And so this is the shape of things. As always, red arrows mean urgent attention is required. Yellow arrows mean that it would be useful. 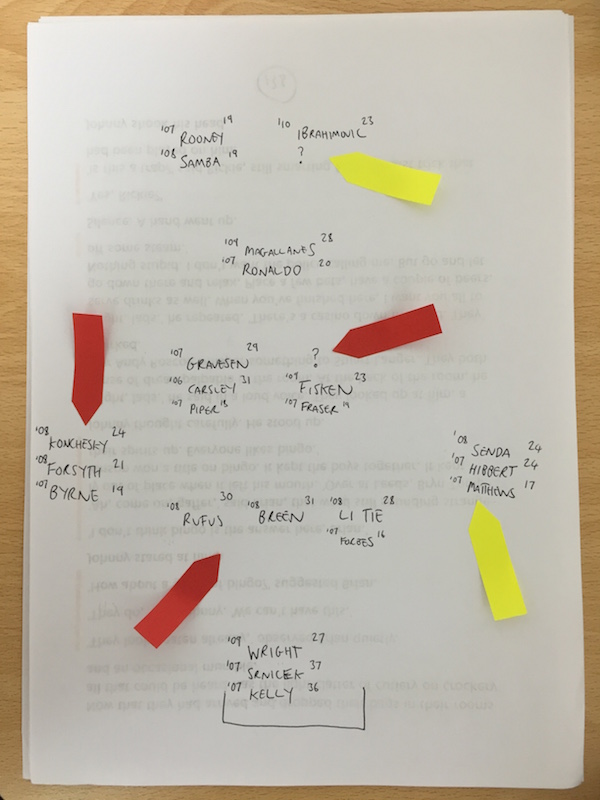 Scouts have been scouring Europe all season and this is the shortlist that we’ll be working from. As you can see, there’s a real emphasis on defensive players this summer. We need to ensure that we’re not distracted by shiny things this time. And we need to hope that the Premier League’s TV revenue money clears soon. 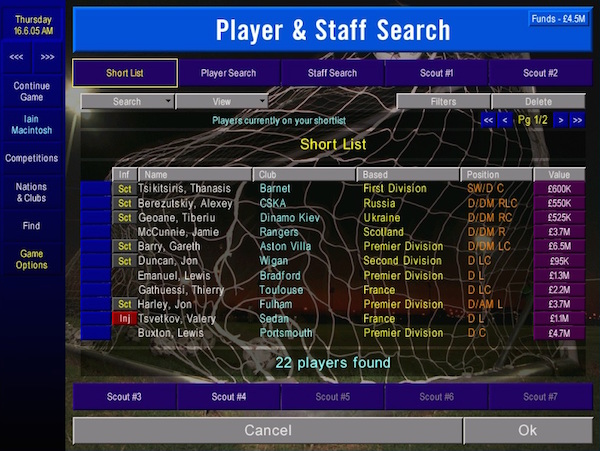 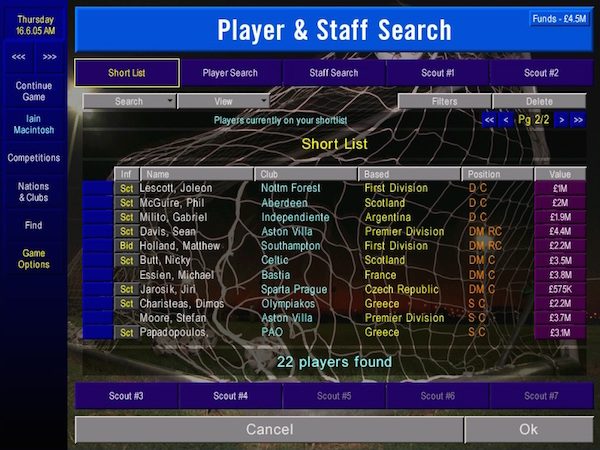 Everyone else has already got started. Newcastle make two incredible moves, while Manchester United shrug off the loss with a shrewd move of their own. 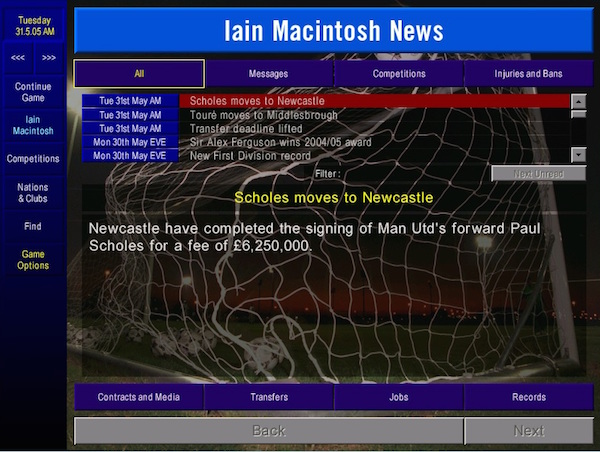 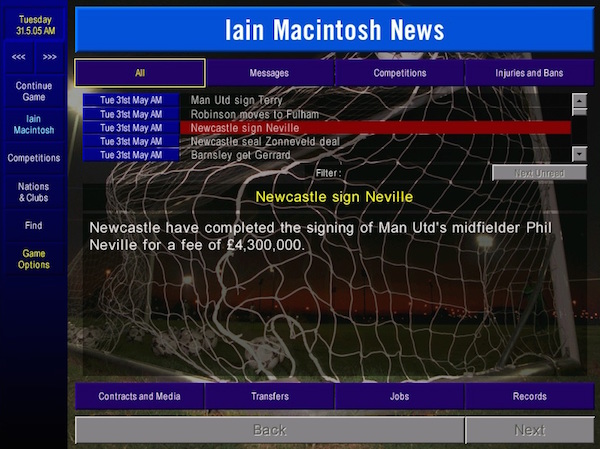 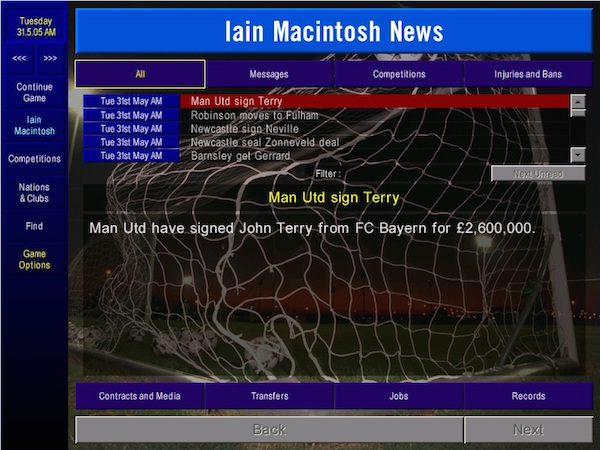 But there’s a word of warning from the board about my performance. Apparently, the people of Merseyside are not yet bewitched by my flowing football. The ungrateful bastards, after all I’ve done. This football club would now be called Everton Phoenix and they’d be playing down the Power League if it wasn’t for me. But I swear that by the time I’ve got this team purring, you won’t be able to buy a ticket for Kings Dock without selling a kidney first.

And I hope I’m right. Because the board seem to have got it into their heads that it’s time to win something… 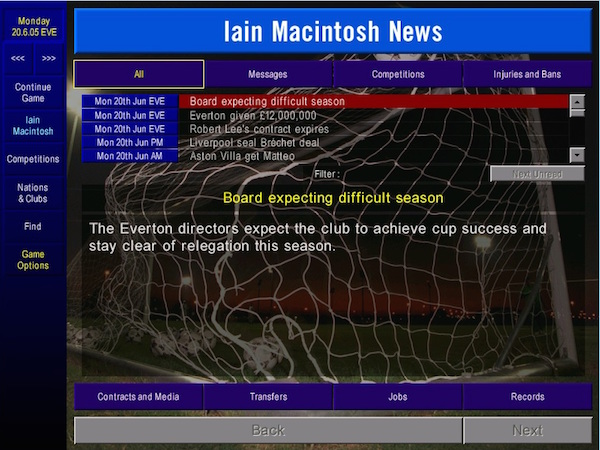