This feels like a big summer for Everton. And for me. The first two years were a struggle for survival, one rather more successful than the other. The third year was one of transition, as the debts were cleared and the stadium constructed. The fourth year…well…that was regrettable. We improved at the end and there’s nothing particularly shameful about a mid-table finish, but it could have been more. It should have been more. And yes, that was my fault. I shouldn’t have spent so much money on Zlatan when the midfield was in obvious decay. And I understand why you doubt me.

@thesetpieces How can we trust him with more money when he signed the likes of Forsyth, Senda, Dure, Ayew, Lee, Hyde and Fisken? Madness

I also understand why the Everton board have suddenly inserted a demand for cup success into what is usually a list of low expectations. This is the fifth year of my stewardship. It is time, as the Queen Mother once said, to either shit or get off the pot.

@thesetpieces seems like the Everton board have caught on and are using their expectations as an excuse to sack MacIntosh!

The clear-out continues apace. Claus Jorgensen was one of my trio of ‘unusual’ signings, but he’s gone now and for five times the purchase price. If nothing else, I’ve created a useful sideline in fixing-up and selling-on mediocre footballers. 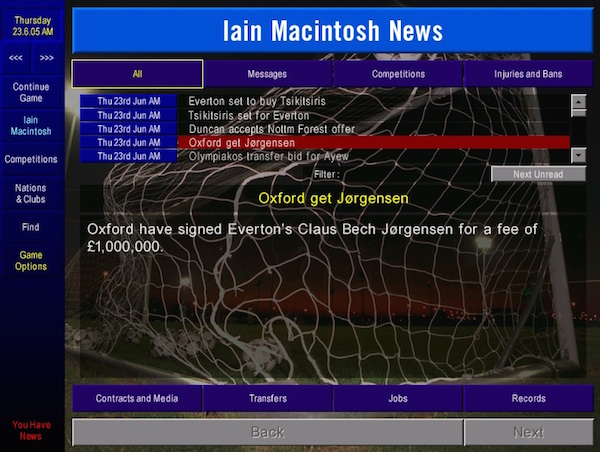 The money doesn’t stay in the bank account for long. It goes straight to Barnet for their Greek defender, Thanasis Tsikitsiris, and it will be a while before I can spell that without sticking my tongue out of the corner of my mouth. He will provide cover to the Gang of Three, but the intention is for him to be my fifth choice centre-back. I want another one too. 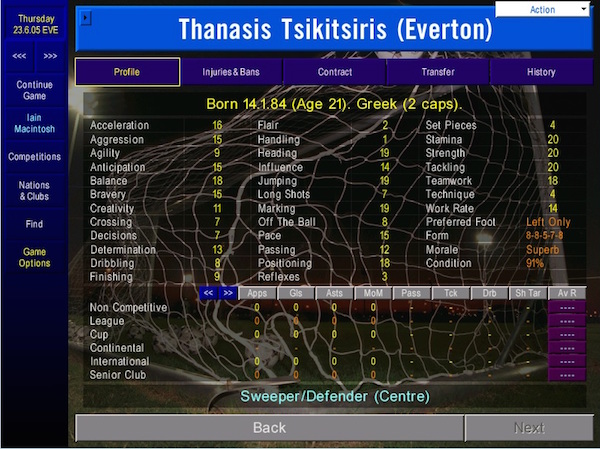 We also bid farewell to a genuine Everton hero, the remarkable Kwame Ayew. For just £350,000, Ayew arrived when we needed him most and scored freely in a difficult season. With Wayne Rooney, Zlatan and Cherno Samba in the squad, he was always going to struggle for game time. He’ll enjoy seeing out his career in Greece, I’m sure. 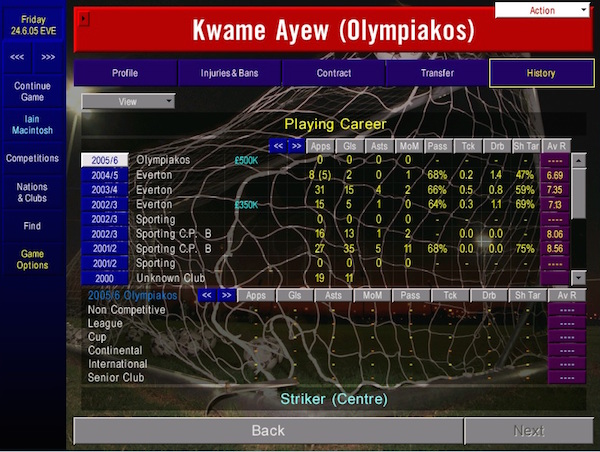 And farewell to Redondo too. I always had high hopes for him, a player of indisputable class, but the Premier League was too much for his tiring legs. I like to think that he was a useful character to have in the dressing room and an example to the youngsters. 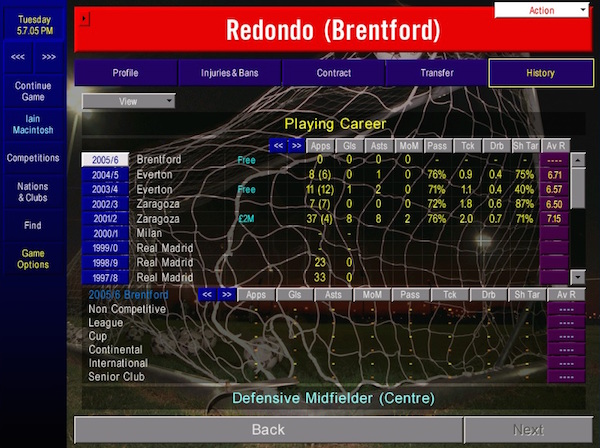 But, with respect to those two warriors, the real story of the summer is in Manchester. There has been a great disturbance in the force. Sir Alex Ferguson has retired and, in his place, United have opted to hire…erm…a Liverpool legend. That’s a bold strategy, Cotton. Let’s see if it pays off. 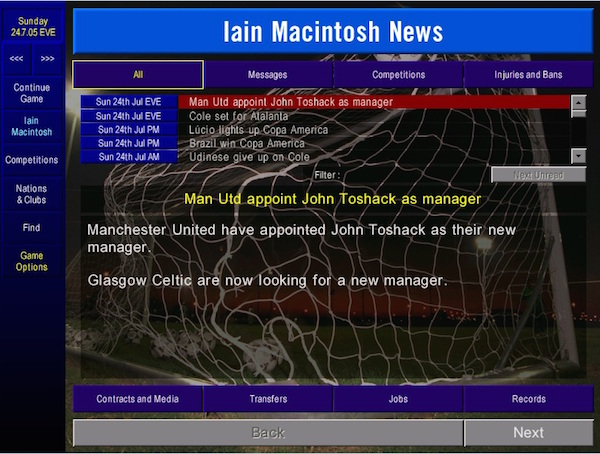 But while the clear-out goes well, it’s a lot harder to actually bring anyone in. We miss out on Joe Cole, who chooses Atalanta above Everton. We miss out on Ricardo Gardner, who prefers the red side of Merseyside. Work permit issues wipe out three moves for Eastern European players of class, including Jiri Jarosik. Aston Villa are playing hardball over the future of Gareth Barry. I can’t convince Portsmouth to let go of either Lewis Buxton or Eddie Howe and don’t even ask about Nottingham Forest’s refusal to let Joleon Lescott leave.

By the time the first friendly rolls around, we’ve only managed to sign Tsikitsiris, but then a £6.5m punt pays off on Thiago Motta, still Brazilian, who has been very unhappy at Barcelona. He’s very quick and very interesting, but does lack a little bit of sawdust and spit, if you know what I mean. Not to worry, he’ll have Thomas Gravesen there for that. And so to the first friendly against Carlisle. 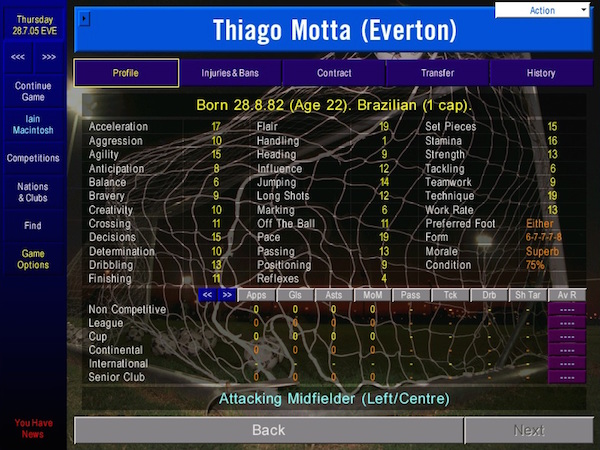 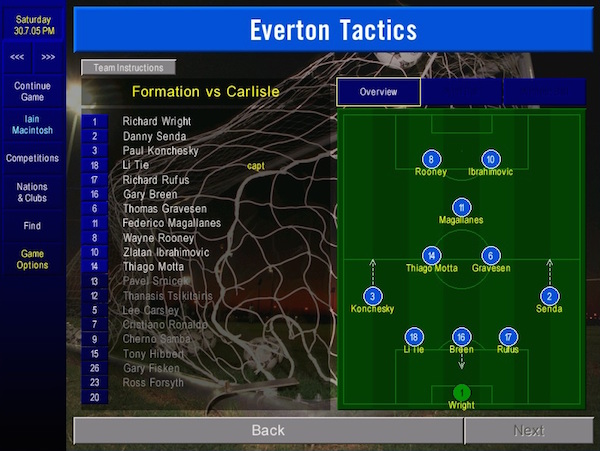 Nothing to see here. A flurry of goals, absolute comfort and strong performances from everyone. A couple of the players are upset about the lack of squad depth and, I have to say, I’m right there with them. I’m doing my best, but this is a testing transfer window. 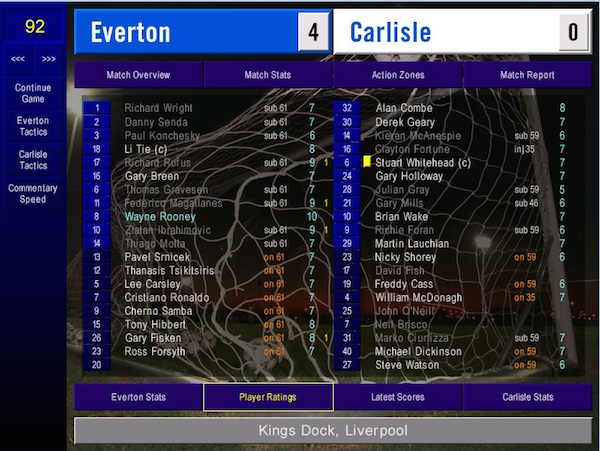 Fortunately, another attacking midfielder is secured the very next day. Because of the game’s inclusion of a little used contract protection clause, it’s possible to grab players for face value when a certain proportion of their deal elapses. And that’s how I’m able to snare Ryan Williams for just £1.3m. I think I’ll be able to play him from midfield, but even if that doesn’t work, he’s there in case I want to play with wingers, or in case of injury to Federico Magallanes and Cristiano Ronaldo, who in turn will also be back-up strikers this year, to save me buying a fourth front man. So, what I’m trying to say is, trust me. I’ve got this. 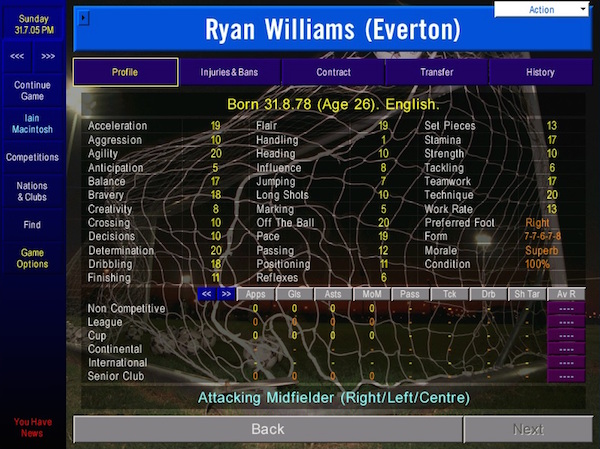 And at least one of the full back positions is sorted with the capture of Mauro Navas for £2.5m. He can play on the left and the right, and he’s represents a significant upgrade on Paul Konchesky. Though, to be honest, you could the same about a broom with an Everton shirt draped over the top. I still want another full back, but it’s proving troublesome. 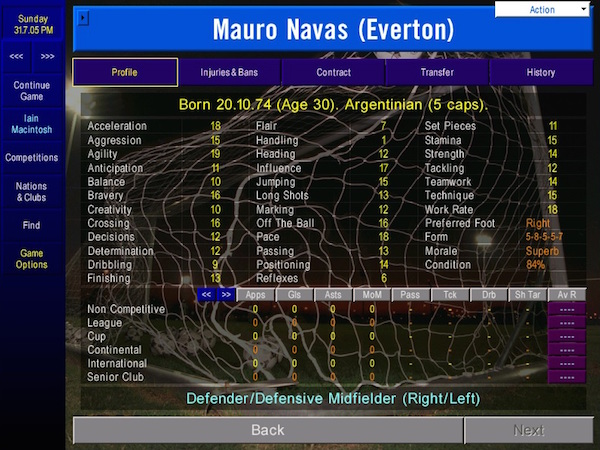 But then, as if all the ketchup is coming out in one big dollop, we bag Ivan de la Peña too. He’s just £1.6m and he does everything, as opposed to Lee Carsley last season, who did fuck all. There’s far more technical ability in the middle now and I’m hoping that we’ll be more creative as a result. I think I could play any combination of Motta, De la Peña or Gravesen and we’ve got Gary Fisken, who I’m sure is better than people think, as back up alongside Carsley. 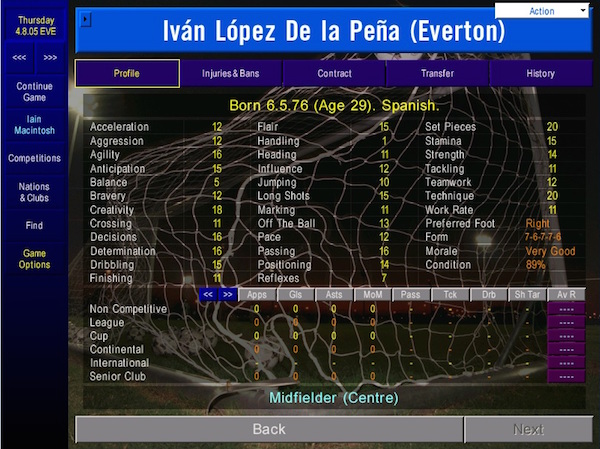 And who better to try these players out on than Bolton Wanders, bane of my existence? It’s a strong line-up, it’s a strong bench. It bodes well. I’m quite excited about this. With the exception of one centre-back and one full-back, I’d say that the squad is looking pretty balanced. It’s also interesting to note that we have only six players (Wright, Li Tie, Gravesen, Rooney, Carsley, Hibbert) in the 20 man squad who were at Everton when I arrived. 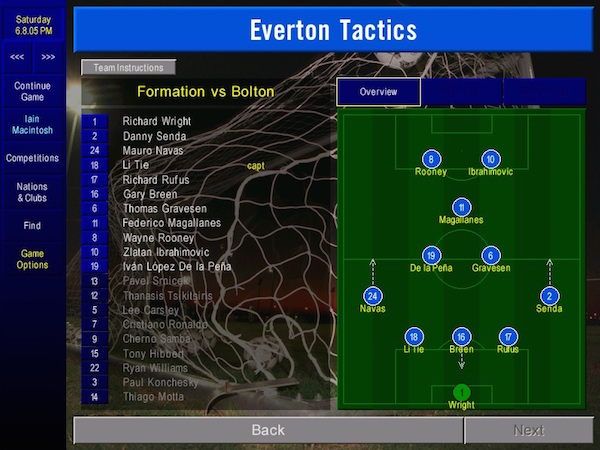 I didn’t think it was possible for a 4-1 win to annoy me, but Bolton do have a habit of ruining everything in my life. Sander Westerweld’s early dismissal means that it’s hard to really take anything from this otherwise-pleasing drubbing. Lots of goals, lots of good performances, but is it art? No, I don’t think it is. Stupid Bolton, ruining everything. 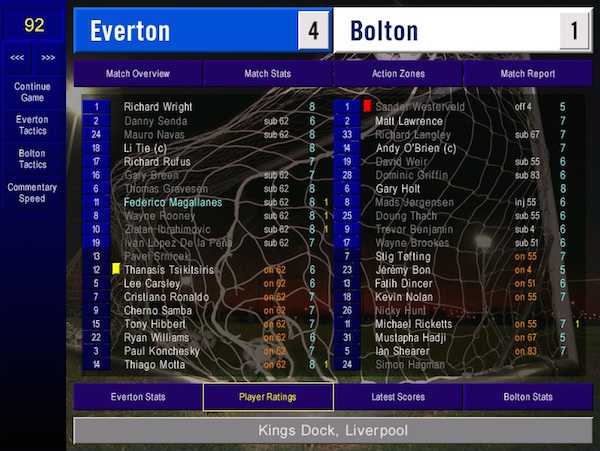 That just leaves one more friendly and I want to try something here. I want to see what we’ll be like with all that pace and quality out on the wings. Could we use a 4-4-2 in those difficult away games? Don’t worry, I’m not planning to chop and change as I did last year. But no-one ever wasted any time doing reconnaissance. 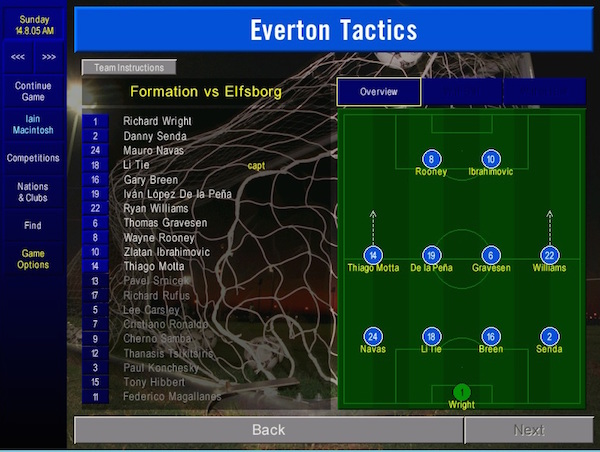 That was very solid and very impressive. We shouldn’t read too much into it, it was only Elfsborg, but I can come out of this pre-season campaign with a certain amount of confidence. And it’s fair to say that my two wingers performed very nicely indeed. Something to ponder, that. 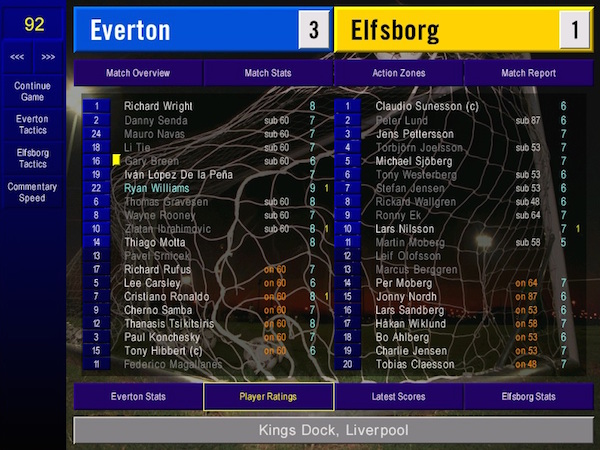 But not for now. For now, we can only watch the Charity Shield, applaud John Toshack’s first trophy for Manchester United…and wait. We being against Blackburn. And we’ve got some making up to do. 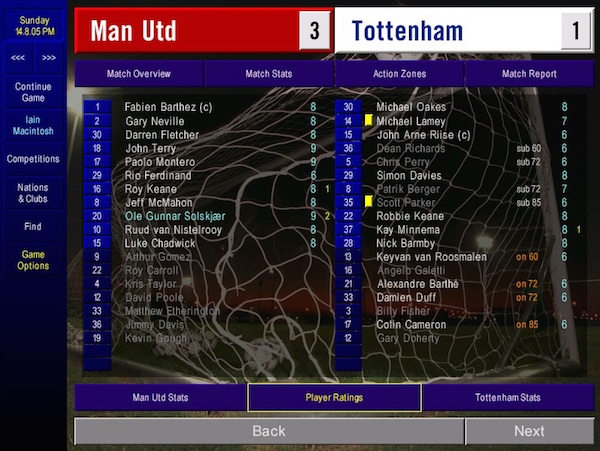