We have new players, we have a new formation and we have renewed hope. Could this be the season that we shake off the shackles of misery and stride to a brighter, self-sufficient future? No, of course not. We’re absolutely fucked. But perhaps we can play some decent football along the way, so let’s get some smiles on some faces, eh?

And we’re not the only team in a state of upheaval. Arsenal have cashed in on one of their most valuable assets, allowing Patrick Vieira to move to AC Milan for £38m. That is a huge loss for the Gunners, who move quickly to reinvest a chunk of that windfall on…erm…Jean Alain Boumsong. 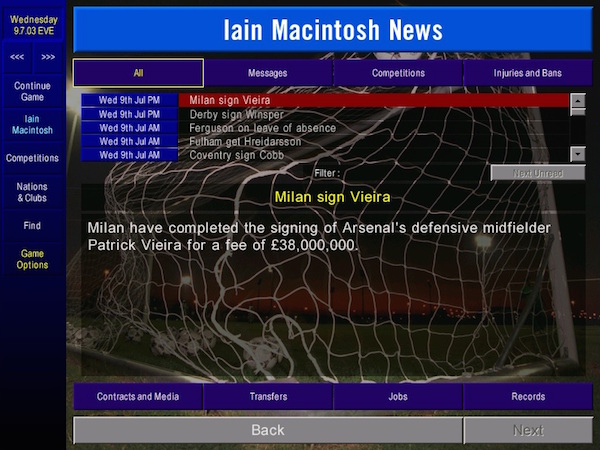 It’s time for us to get started. Resisting the urge to pick an easy team for our pre-season opener, we’ve invited St Etienne to our partially condemned home of Goodison Park. We’re going 3-5-2 with lower league speed demons as wing backs and with new signing Federico Mangallanes in the hole. Let’s see how it goes. 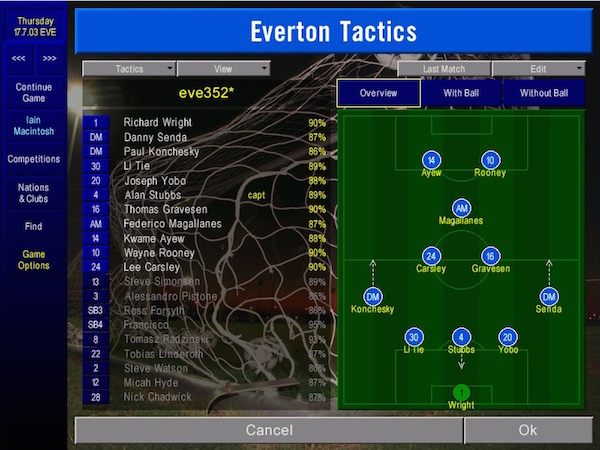 It goes…well. Curiously well. We don’t roll them over, but we make significantly more chances and we dominate the game. Mangallanes is everywhere, rocketing shots in all over the place. There are genuinely impressive performances across all departments. It feels weird. It can’t last. 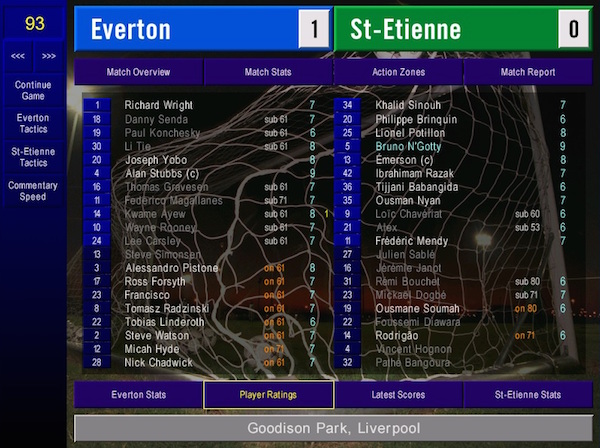 But we’re brought crashing down to earth the next day when new signing Francisco turns up late for training. I can’t have this. We’re bad enough without players going rogue. It’s his first time so I give him a warning and hope it’s enough. He accepts it without comment, which is somehow even more subversive and ominous than any kind of resistance. I am troubled. 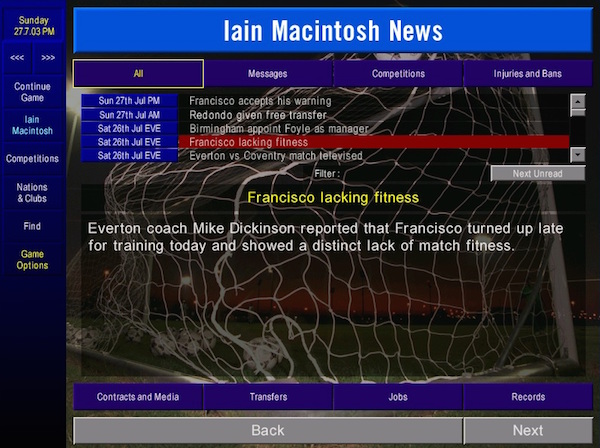 Due to unforeseen circumstances, presumably European interruptions, my Scottish tour is ravaged by cancellations. From four challenging fixtures I am reduced to a trip to Motherwell and a game against someone called Baillieston. It will have to do. We need, more than anything else, to see if that first result was a fluke or not. 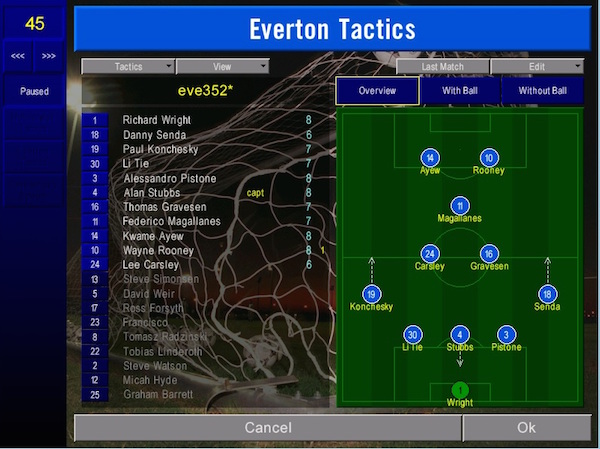 Apparently not. This isn’t quite so impressive, we’re indebted to Richard Wright for a series of fine saves, but again we make lots of chances for ourselves. The midfield, with the exception of an out of sorts Lee Carsley, looks formidable and Magallanes is superb again. I’m starting to feel quite good about this. 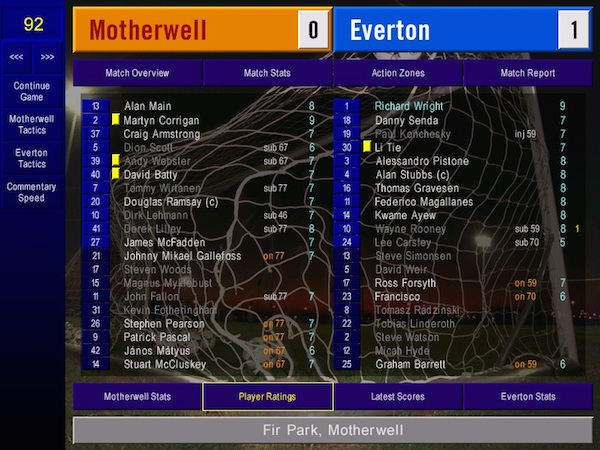 And back we fall to earth. Two injuries to our two left-backs. One for three months, one for three weeks. 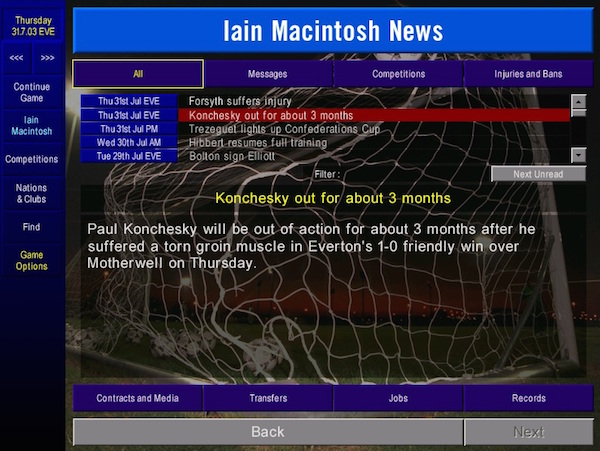 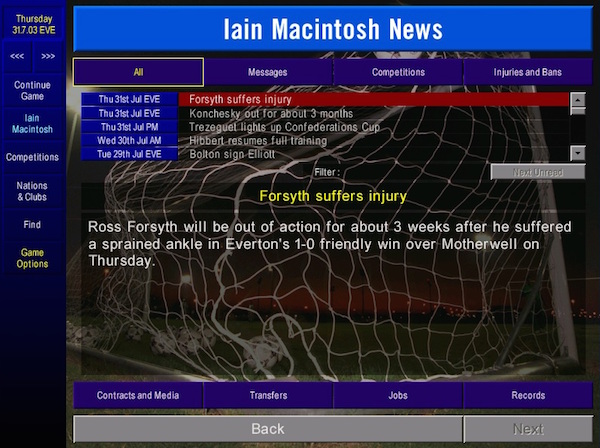 Now we have to call Gary Naysmith back from the reserves and no-one wanted to do that. But I’ve been working on something else. Something to renew confidence and ensure that even if Francesco is a bad egg, that we’re not found wanting in midfield. I’ve signed Redondo. And he’s particularly looking forward to working with me. I suspect that he knows about the drinks globe. 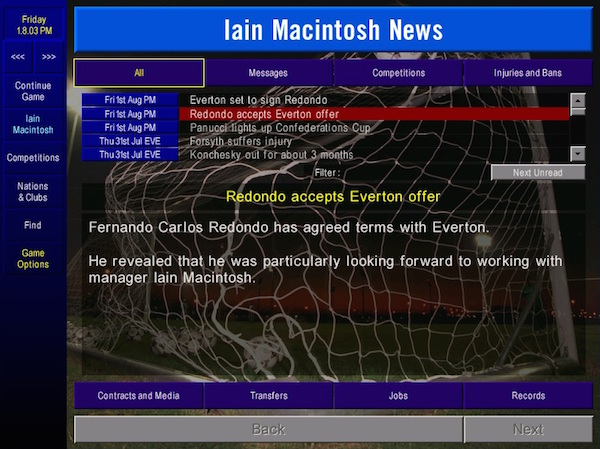 Ha! Take that, expectations of relegation. We’ve got Gravesen, we’ve got Carsley, we’ve got Redondo and we’ve got Francesco. That, that right there, is a top six midfield. Come at me, Premier League! Come at me! I FEEL ALIVE. 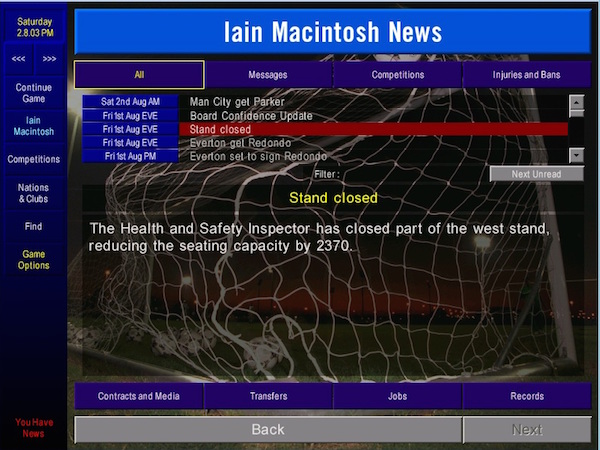 For fuck’s sake. Why can’t we have nice things? Goodison Park is now down to 21,330. That’s just over 50% of its original capacity. How long can this go on? We’ll be playing in the fucking park soon. But do you see me crying about it? Absolutely not. This, this right here, is a face of purest stoicism. We move on, we move forward. Come on you, blue dogs of war. And as a signal of intent, gaze upon my works, you mighty, and despair. I had to lock Stretford in a cupboard and I had to steal the key to Kenwright’s drinks cabinet, but we got it over the line. Delighted. You see that? He’s delighted. 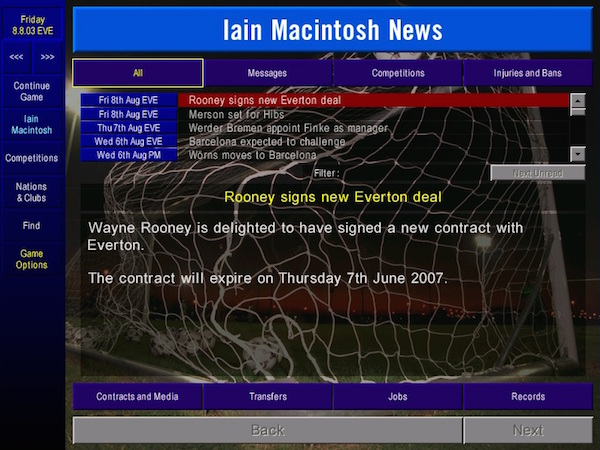 Onwards to the final pre-season friendly of the summer. It’s Baillieston. I’ve never heard of Baillieston. That should be a good sign, shouldn’t it? 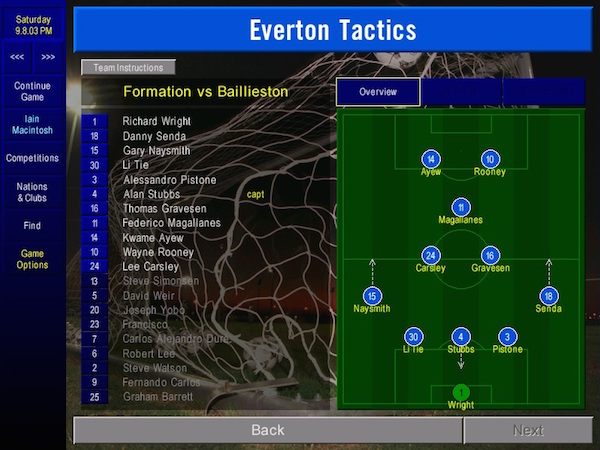 Well, it’s a comfortable win. It should have been more comfortable, but look at Naysmith! He loves it at wingback, the underwhelming little bastard. Maybe this will be the making of him. And look at that midfield. We have Redondo. That’s marvellous. That really is marvellous. 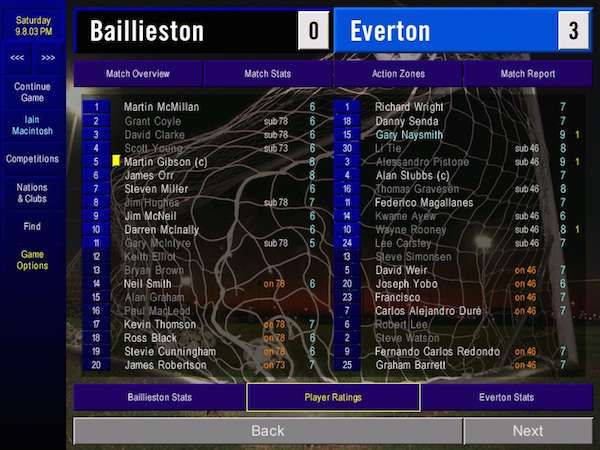 With so many new names on the register, we have to shed a few for fear of creating a bad, well, a worse atmosphere in the group. It seems a little pointless, given that the proceeds will just vanish into a black hole, but perhaps the board will appreciate the gesture. Onto the transfer list go: Micah Hyde (6.56 last season); Tobias Linderoth (6.49 average over two seasons); Steve Watson (6.67 average over two seasons) and Rob Lee (6.65 average last season). Graham Barrett, who has been here on trial over pre-season, is released after failing to impress. Chicago Fire make a swift move for Watson and the board insists that their low ball offer of £725,000 is accepted.

So here’s the roster:

We open the campaign tomorrow at what remains of our home and Fulham are the visitors. Everton expects that every man will do his duty. If we are fated to fall into the second division this season, then by Christ, we shall go down swinging.