With limited resources, we have to pick and choose where we make our repairs. I dream of a reality where we can make sweeping changes to this squad, but Gabrielle lied; dreams can’t come true. But let’s see where the biggest holes are and have a think about what we can do. 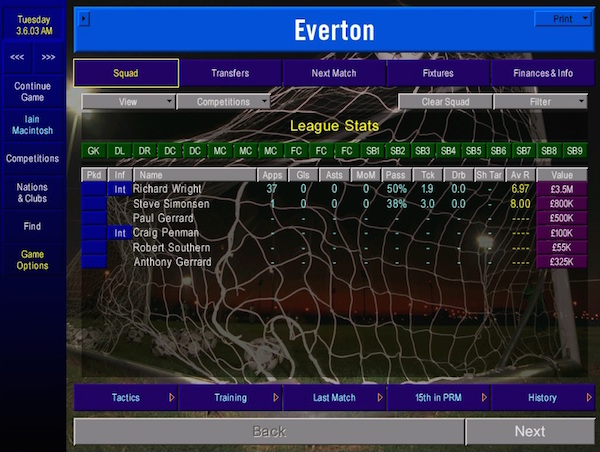 There’s not much we can do here really. Richard Wright is a regular in the England squad and, while he’s absolutely awful about three times a season, he makes up for it elsewhere. Steve Simonsen’s little tantrum in the first season is a blot on his copybook, but he’s proved an able deputy. We lack a bright young starlet in reserve, but I think we’ll have to let that slide for now. 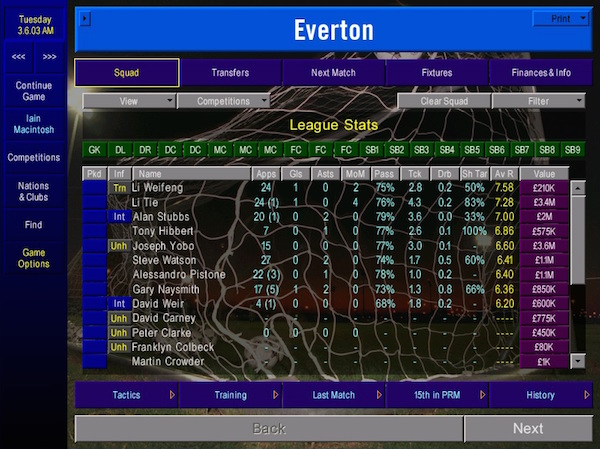 Well, the good news is that the decision to give the Chinese lads a year to acclimatise was vindicated. They were both consistently excellent even in a miserable season. Unfortunately, Li Weifeng was concerned by our financial plight and walked out on us to join Blackburn Rovers on a Bosman. Li Tie did very well too and came with the added bonuses of actually showing us some loyalty and some versatility too in defensive midfield. It was a disappointing year for Alan Stubbs and Joseph Yobo, while David Weir dropped all the way to the bottom of the pecking order. But the real problem is at full back. Tony Hibbert is the closest thing we have to a decent option, but there’s nothing else. Steve Watson, Alessandro Pistone and Gary Naysmith all finished with averages ratings of under 6.50. That’s not acceptable. We have a young left back en route. We need someone else and, given our books, we need them to be able to play on the right and the left. 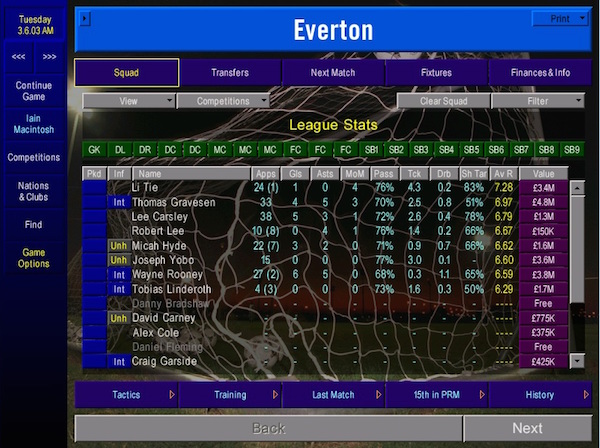 It’s all very average in midfield. As usual, Thomas Gravesen and Lee Carsley brought the most to the party but even their figures are lower than you might expect. Rob Lee tried his best but fell short, Micah Hyde is nothing more than emergency back up and Tobias Linderoth can’t be trusted not to drink his own bath water. Behind them? Nothing. We have Francisco on his way and Federico Magallanes to play in the hole. It would be nice to have something coming through from the youth ranks, but I’m not going to lie to you, they’re all terrible. 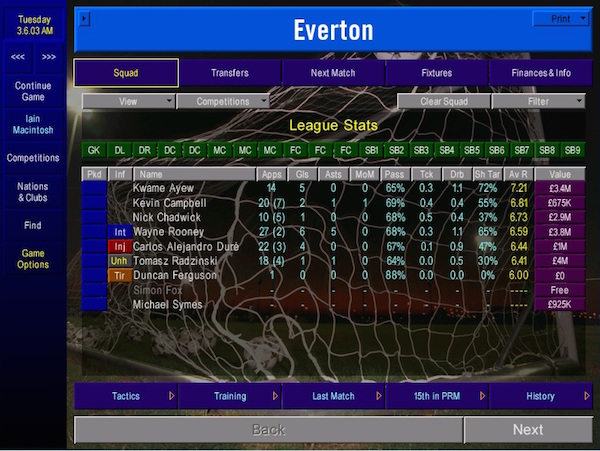 This is where the real problems are. This is a disgraceful return. If it hadn’t have been for Kwame Ayew, we’d have been in real trouble. The total contribution from centre-forwards Tomasz Radzinski, Kevin Campbell and Nick Chadwick was four goals. Four. Carlos Dure had four on his own from the hole, while Wayne Rooney had five, but neither of them performed consistently. This is a dog’s dinner of an attacking line-up. We need more firepower, but it’s the hardest thing to find on a tight budget. Nevertheless, we must try.

Jermaine Darlington might be the answer to the full back question, assuming the question is phrased; who’s really quick, but not very good at football. Kevin Muscat is another option, but it’s a brutal one. The scouts continue their work across Europe. I sincerely hope they prevail.

It has become obvious that the diamond lights formation was little more than a sticking plaster on a gunshot wound. The strength through the middle helped us against the weaker sides, but we had no edge over the bigger teams. We were routinely thrashed. We have to change. There’s no point going to anything with wide attackers because we haven’t got them. But we could take our width from wing backs. A bit of pace and adventure there might be what we need. And it’s not as if we’re short on centre-backs for a back three. If we acquire the legs out wide, perhaps we can find the edge we need with a 3-5-2. This season is going to be hideous. If we’re going out, we may as well go out with a flourish. 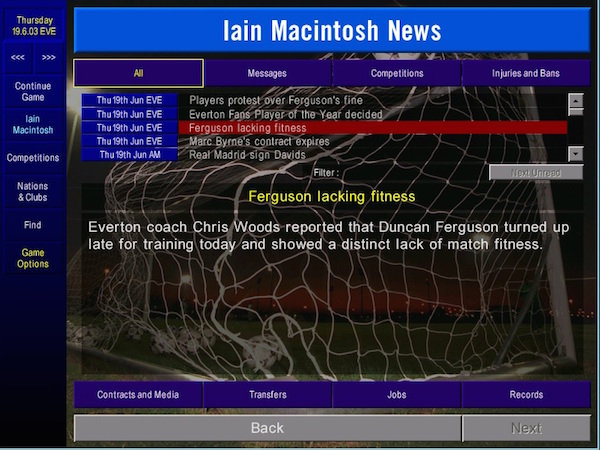 I’m don’t expect too much from my players at this time of the year, but it would be nice if they showed up. Duncan Ferguson is late for training AGAIN. I fine him AGAIN. The players protest AGAIN. There is no peaceful resolution. He still has two years on a £27,000 per week contract and he’s been available for free for over a year. No-one wants him and I don’t blame them. My only option is to release him, but then I have to pay him £750,000. We’re not allowed to spend that bringing a player in, I’d be surprised if the board allowed me to spend it kicking someone out. I really wish he’d just take his pigeons and fuck off. 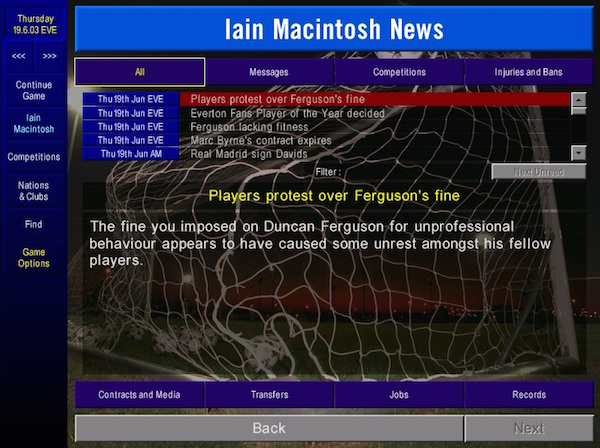 Fully committed to the 3-5-2 plan, I hit the transfer market like Imelda Marcos on Black Friday. £100,000 goes on Charlton youngster Paul Konchensky, another £100,000 is splashed out on Danny Senda. They have pace. They can provide width. I have done it. I have actually talked myself into believing that spending a pittance on two lower league speed monsters is going to be enough to keep Everton in the Premier League. 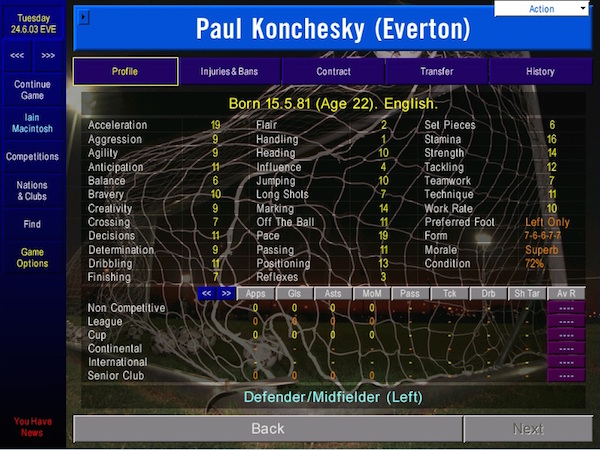 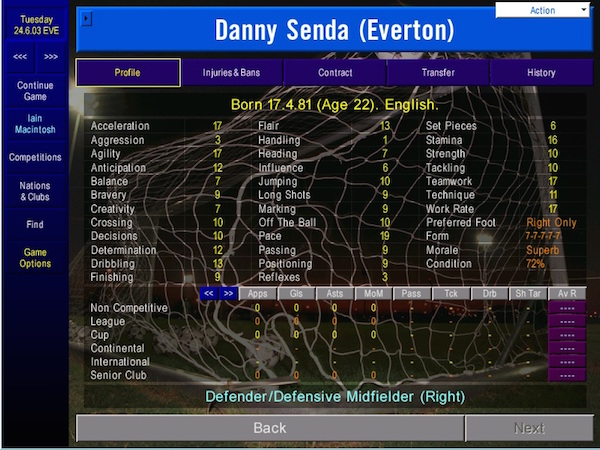 In order to give the players the best chance to settle into a new shape, I schedule an early friendly with St Etienne and a four game tour of Scotland. Five games to find shape and coherence. And then it all begins again. This feels like the last throw of the dice with the last pair of dice in the world rolled down a long plank of wood that’s sticking out over the Grand Canyon. It’s a long shot. But every now and then, long shots go in. 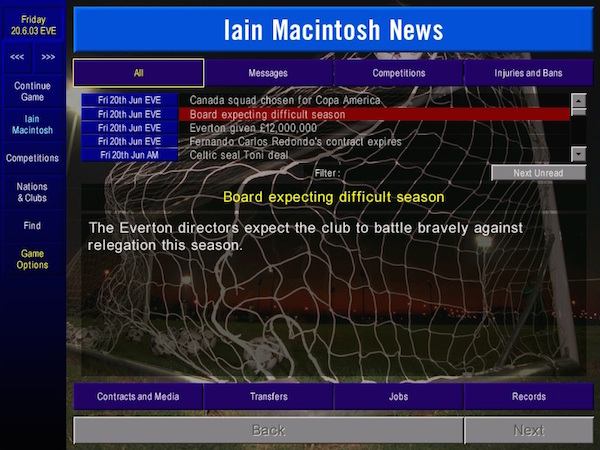