You find out a lot about your team in October. The new season buzz has worn off and the games come thick and fast. You learn who can cope with the physical demands of the Premier League and who cannot. September was excellent. Even though we dropped a few points, we dropped them at the feet of the big boys and we always played well in the process. But October is going to be about two things. Beating the teams in the chasing pack. And beating bloody Liverpool. We’ve still never managed it. But they’ve started badly and we’ve started well. And I feel good about this season.

First, however, we have to find a way past Bastard Bolton. Sam Allardyce’s side continue to play with that 3-5-2 formation, but now that we’ve established that we can too, even away from home, perhaps we’ll enjoy a bit more success. Cristiano Ronaldo will continue in the number 10 role and, in the absence of Wayne Rooney, we’ll explore the potential of a Zlatan/Samba axis up front. 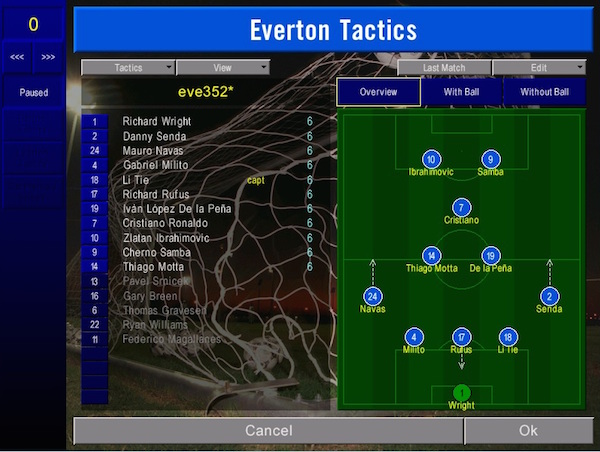 Well, we’ll take that. A point at Bolton is not to be sniffed at. It was a hard game, a game of very few chances. Zlatan opened the scoring early on, but we couldn’t find a way past Sander Westerveld for a second goal. Naturally, Bolton came back at us. Mads Jorgensen spanked one past Richard Wright from range and by the end, it felt as if a point was fair enough. 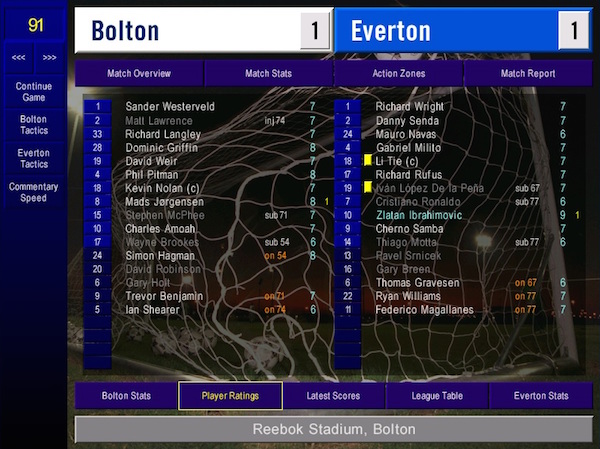 I expect rather more against Birmingham. They’re no longer going with the back three, they’ve reverted to a 4-4-2, so I fancy my chances of getting something here. I’m a bit concerned that Ronaldo isn’t taking his opportunity to shine, so I’ll be watching him very closely today. But we’ll go unchanged and see what happens. 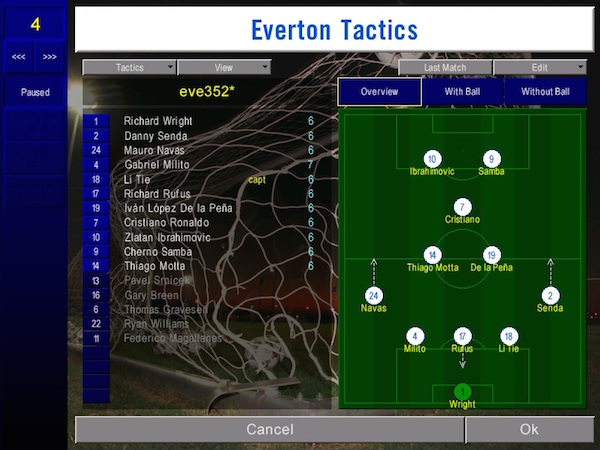 That was good and it should have been far better. Birmingham gave us a bit of a fright in the opening exchanges, but their threat ended when Kirk Hilton was shown a straight red card in the tenth minute. They went to 4-4-1 which made our use of three defenders entirely pointless. Danny Senda went to right wing, Richard Rufus went to right back and Thiago Motta took up position on the left flank. We eviscerated them. It was 3-0 by half-time and how they escaped without taking further damage is a mystery. But it was a poor day for Ronaldo. He was withdrawn again just before the hour. I’m still waiting for him to kick on, but it doesn’t seem to be happening. 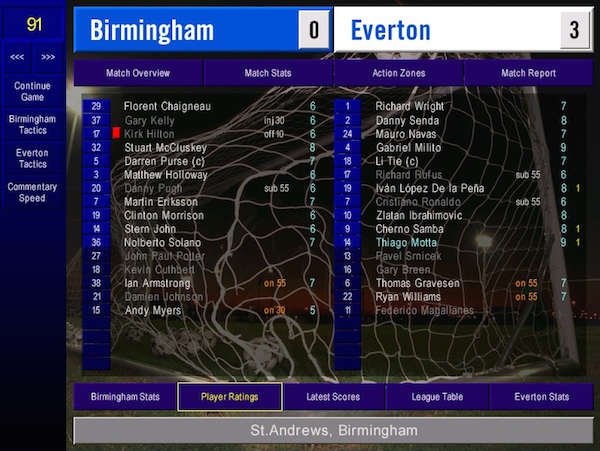 Another issue is the middle defender role. I’ve noticed all season that whoever takes up that position, they always get a six. With the two outer defenders man-marking two strikers, they never seem to have enough to do. I usually have them set to zonal marking, so that they can help out where required, but I’ve tried lots of different options too. I’ve had them man-marking creative midfielders, hanging back to guard against breaks, pushing up to help create moves. Nothing seems to work. I’m increasingly drawn to the idea of 4-4-2 where we can release Ryan Williams and Thiago Motta. But not yet. Tactical fannying around caused us all kinds of problems last season, I don’t want to go down that path without good cause. We make just one change for the Crystal Palace game, replacing Ronaldo with Federico Magallanes. At 28 and with great competition for his role, he may prove expendable… 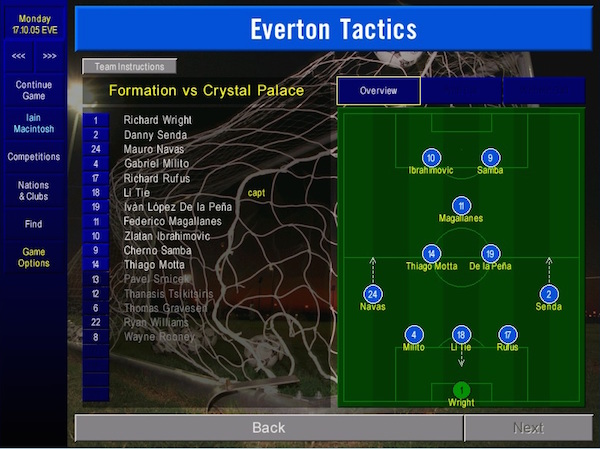 I think he heard me. Magallanes ran the show against Palace, putting us into an early lead and then setting one up for Thiago Motta too. Wade Elliott’s late goal made no difference, but again, we should have scored more. Robert Douglas was like a man possessed in the Palace goal. We have two of the finest strikers in the game, but neither of them seem particularly ruthless. Thank goodness that Wayne Rooney is nearly fit. 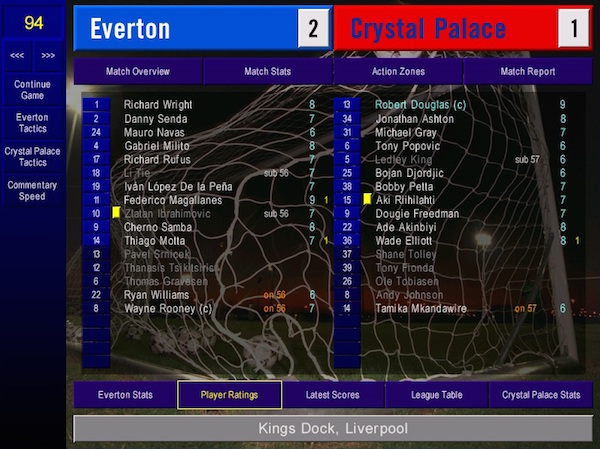 But I’m not bothered about Palace. I’m not bothered about Birmingham. They’re just incidental wins, footnotes to a bigger story. I’m only bothered about Liverpool. I want to beat them so bad that it hurts. I don’t like losing at the best of times, but I can’t stand to lose to them. Remember when we invited them to open the new stadium and they cancelled the friendly at the last minute? That is so typical of them. They think they’re so special because they’ve got all those shiny trophies, but I see them for what they really are: Ged Houllier’s clunky long ball bastards. And I want to wipe the smile off their faces with a hankie that I’ve already used to discretely wipe away the sweat under my armpits so it doesn’t make my shirt look damp on television. Rooney comes back in for Samba and Breen steps in for the internationally required Li Tie. Let’s get them. 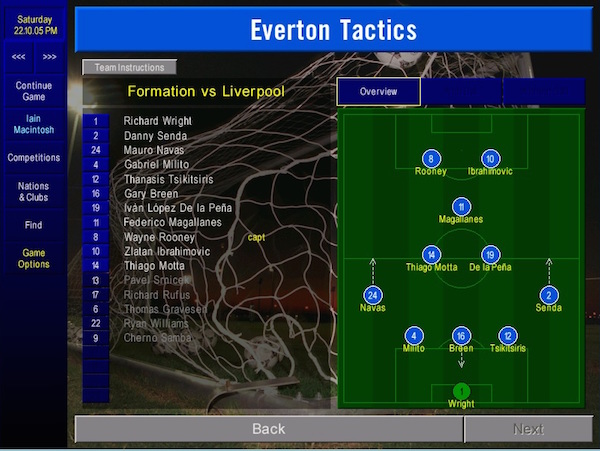 I am…I just…It is…I have nothing. I have no words. We started well. We made chances. We didn’t put any on target, but we made chances. And then it happened. BLAM! BLAM! Two chances, two goals, one in the 35th minute, one in the 36th minute. And that was it. With the notable exception of Gabriel Milito, the fight just drained out of us. A third from Michael Owen just before half time ended the game. I switched to 4-4-2 in the hope that it might spark some kind of revival, but no. Nothing. Nothing at all. I’m just…it’s…you see…no. No, I’m out. I’m going for a walk. 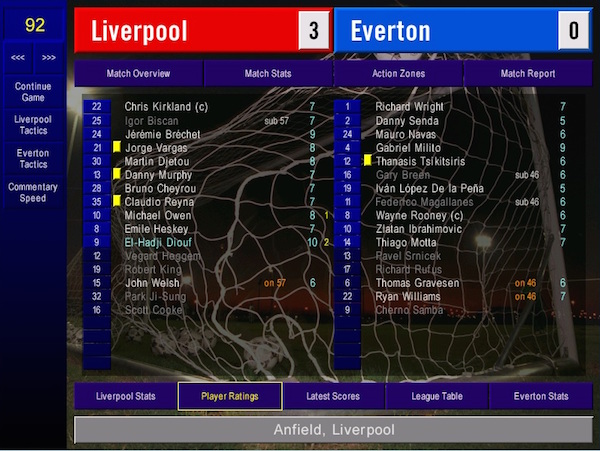 I guess it could be worse. There aren’t many managers in the top flight still with their original club and we’ve just lost another. Farewell, El Tel. You underachieved for years, but somehow got away with it. 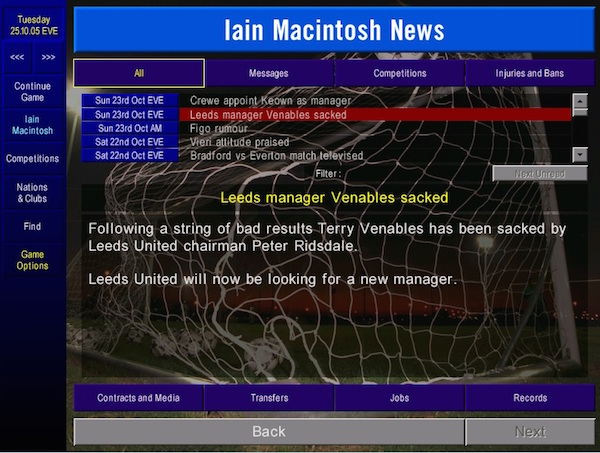 Right, I want a response. I want to the world to know that we are still here and that we are not going to let an abysmal result in an emotional local derby cause any kind of mental landslide. It’s the League Cup and I am sick of being knocked out in the early rounds. I want a complete change, a fresh look, a chance to blow the cobwebs out. We’ll go 4-4-2 to match up with Bradford, currently 19th in the Premier League, and I want to be in the fourth round. Please. 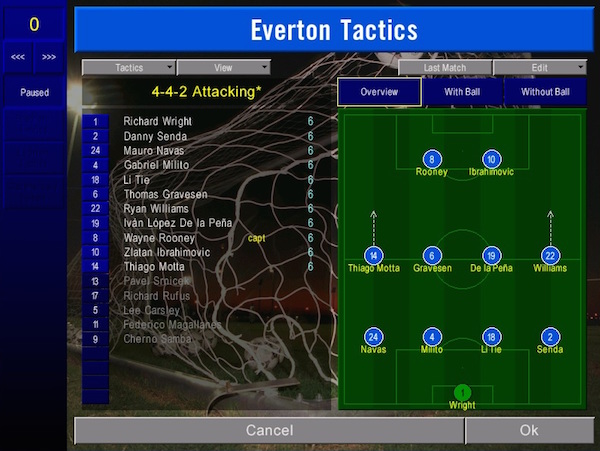 Perfect. Don’t be fooled by the narrow margin of victory. This was a dominant win. Paul Reid headed home a Bradford goal in the second minute and I wanted to cry, but Rooney hit back with a brace that put us in front by the 12th minute. After that, it was entirely one way traffic and it was only thanks to the efforts of Danny Morgan and David Wetherall that we didn’t run up a four or five goal total. This is happening a lot this season, but I’m going to try not to think about it too much. I’m sure it will even out sooner or later. Look at those numbers though. Excellent performances everywhere. That felt good. 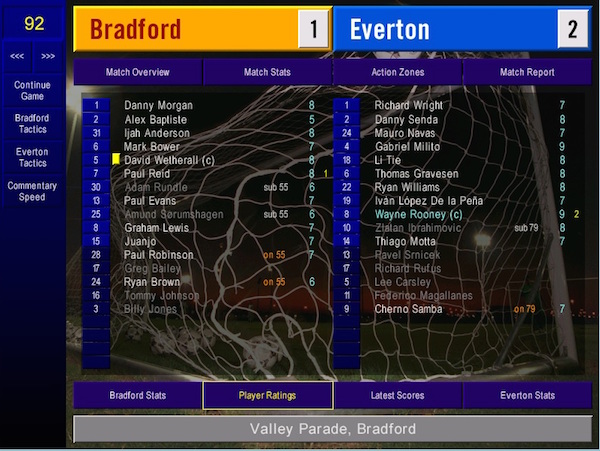 Which means that we go into the final match of the month in good cheer. And I don’t see why I should change a winning team. It’s Aston Villa at home, they’re mid-table, they play a 3-5-2, but I think we can take them in this shape. The players seem to like it. 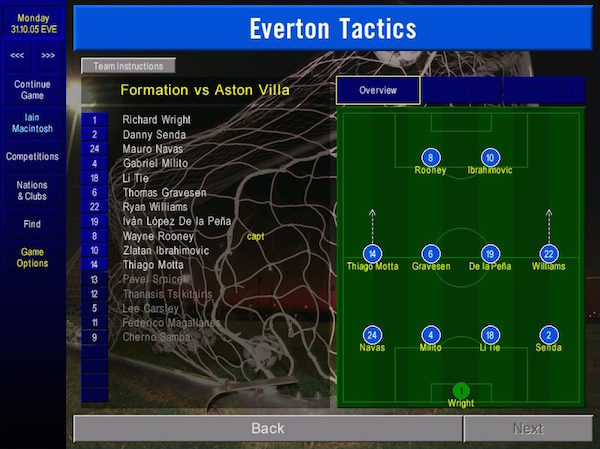 And we’re back to square one. Eighteen shots, twelve on target and we’re left to breathe a huge sigh of relief when Cherno Samba pops up and scores an injury time equaliser. The 4-4-2 created lots of chances, but Jerzy Dudek was unbeatable. We’ve been cursed by ex-Liverpool goalkeepers this month. That bloody club. Even when I’m not playing them, they piss me off. We reverted back to 3-5-2 on 65 minutes, more out of desperation than anything else. Magallanes was told to push up, the entire team was set to attack and the chances continued to mount up. A draw is desperately unfair. A defeat would have been criminal. 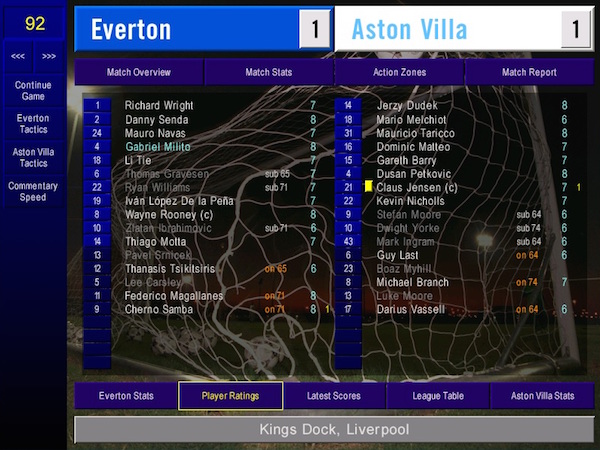 So what can we take from October? We’re certainly a much better team than we were last season. We’re comfortable in two different formations too, which is always handy. We still have a problem in the middle of the defence, we ship silly goals, we’ve developed some kind of inability to convert enough of our chances and we’re plagued by old adversaries. But look at the table. Look where we are. We’re doing fine. If a couple of those draws had been wins, we’d be in the title race. We just need to find an extra 10% from somewhere. Perhaps November will be more forgiving… 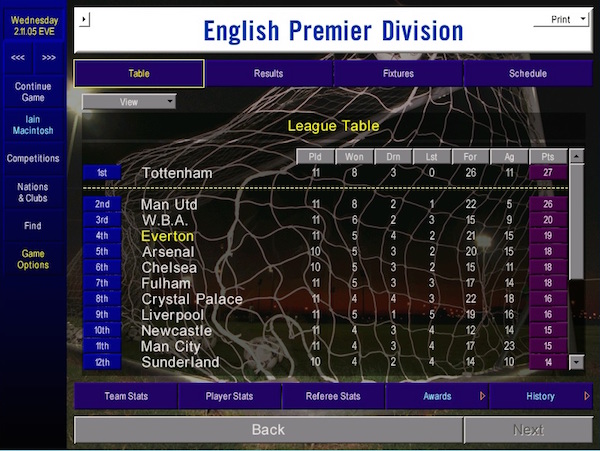 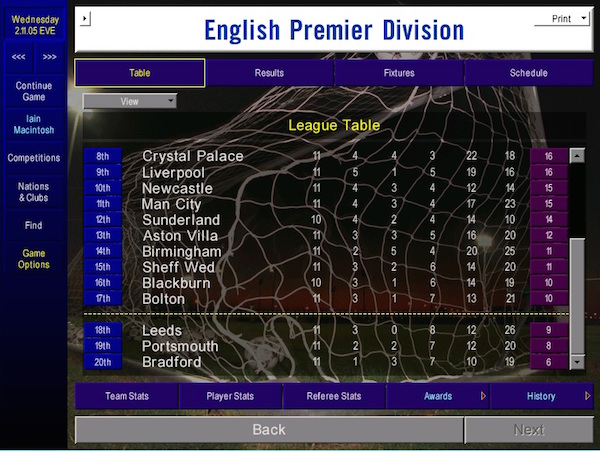