Consistency. That’s what we need. A run of wins to revitalise this football club and secure some bloody silverware. We’re a little bit meh right now. A little bit sigh. We need to start swinging our swingers and letting people know we’re here. And we can start at Derby.

It’s been a long hard slog for Derby County since they returned to the Premier League in 2002. They managed to stay up with just 34 points in their first season, improving to 44 points in their second, but two draws and four defeats suggests another struggle is ahead for Mark McGhee’s side. They play a grim-faced 4-4-2 with hard tackling and a defensive mentality and they have a very average midfield. However, they do have Ryan Williams on the right wing, so action must be taken to shut him down. He’s hurt us before. Paul Konchesky will not be making forward runs this time and I will use Lee Carsley to provide cover. It’s like that old saying in Tennessee. Well, it’s a saying in Texas, probably in Tennessee too: Fool me once….shame on…shame on you….If you fool me, I can’t get fooled again. 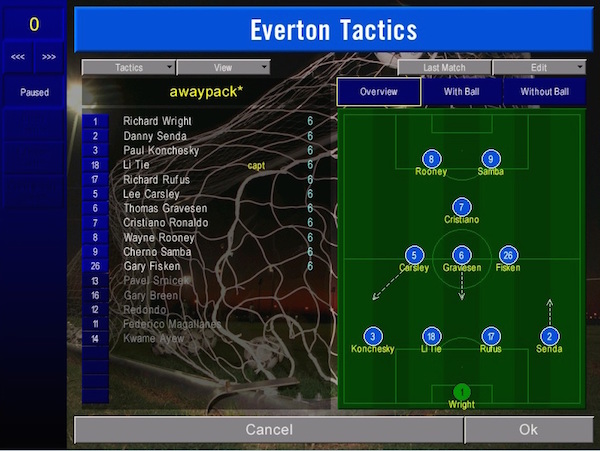 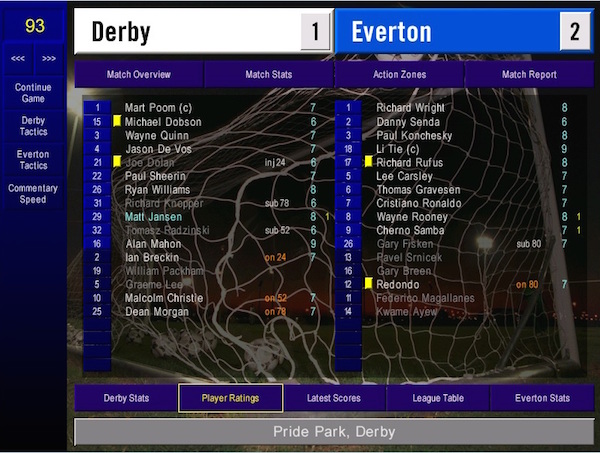 We have an odd relationship with Tottenham. It is a thrash or be thrashed sort of thing that leaves us wary and anxious of their presence. Under Frank Rijkaard, they’ve slowly improved up the table, finishing fifth last season, in spite of the battering we gave them at old Goodison Park. We played 3-5-2 that day and I want to play it again. I want to batter Spurs and I don’t think you, or anyone else, is allowed to stop me. I’ve also had enough of Francisco. No particular reason. I just don’t like his face. He’s been here for ages, he’s never offered anything more than the bare minimum and I’m done with him. He’s on the list. 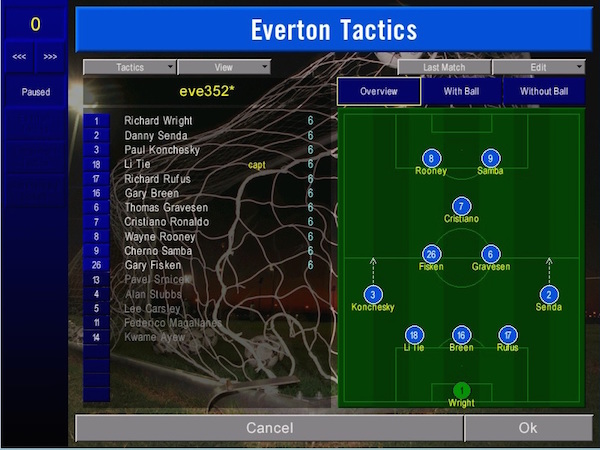 Well, that didn’t go well. We were a goal down after five minutes and two down before we’d had our first shot on target. Everyone was sluggish, none more so than Gary Breen who has really struggled to settle after his big money summer move. Chris Perry’s dismissal early in the second half offered hope, Wayne Rooney scored again to bring us back into the game, but even an ambitious tactical lunge than saw Kwame Ayew on for Breen and stuffed up front failed to turn the tide. That was not good enough. 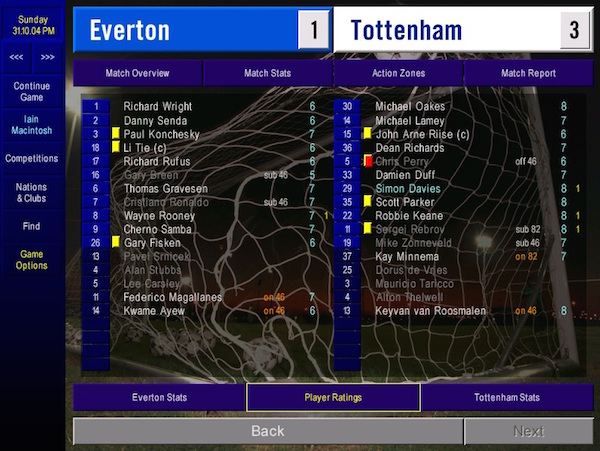 There is some good news though. Wayne Rooney, who has scored six goals in eight games this season, makes his debut for England and, obviously, scores. He’s now worth £9.25m and I’m quite concerned that our poor start to the season is going to start driving a wedge between us. 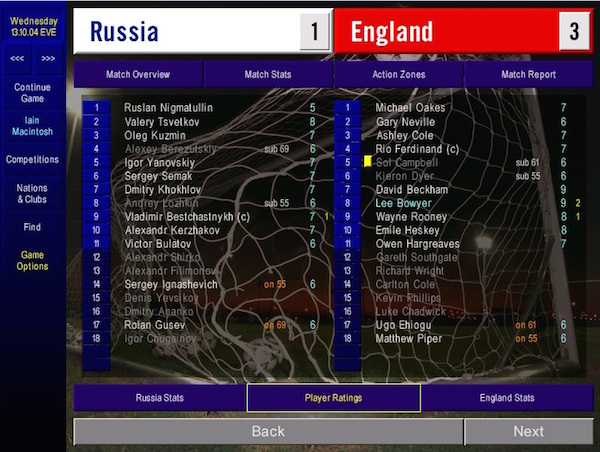 We have Blackburn Rovers, another home game, and it’s a chance to stabilise. They play 4-4-2 under Steve Gritt and our back three formation usually prospers in those circumstances. And yet, I’m concerned by what happened against Tottenham. We can’t afford to throw away easy points at home. We need to make sure that the chances we make are converted. If the back three doesn’t work here, it might be worth scrapping it altogether. Changes will be made however. Federico Magallanes will return and so too will Zlatan Ibrahimovic. Cristiano Ronaldo and Cherno Samba are still young and they can sit this one out. We’ll also make a slight tweak to the shape, using Breen as a man-marker and putting Li Tie into the middle of the defence, with licence to push up and play football. 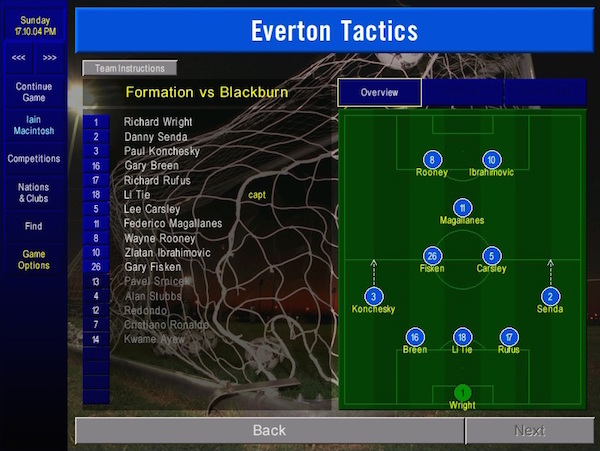 A dramatic afternoon and not a happy one. We start well, we make chances, but Michael Ball, once of this parish, wellies a long shot past Richard Wright and they take the lead. There’s no need to panic. Eight minutes later, Breen heads home and equaliser and there’s another goal for Rooney before half-time. Can we hold onto the lead? No, we cannot. Traitorous wretch Li Weifeng is there when Wright fumbles a corner and the gutless Quisling stabs the ball home. There’s a delightful solo effort for Zlatan four minutes later, but it’s cancelled out by Lucien Mettomo three minutes after that. It’s all very breathless, but there are no more goals. I really think it might be time to can the back three 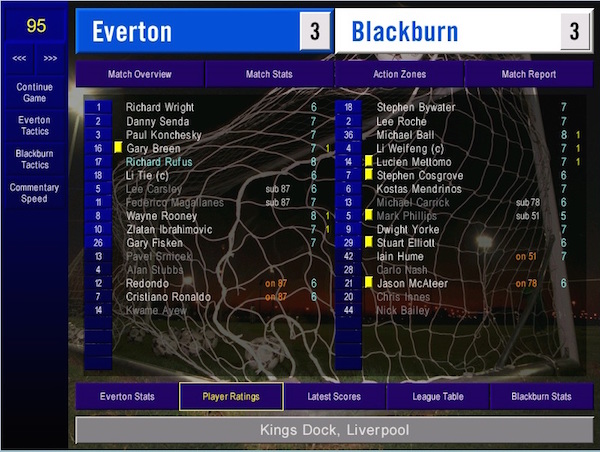 Portsmouth are back in the big time and it’s Kevin Keegan who took them there. Sacked by Manchester City last season, he’s bounced back in style with Pompey. Four wins from his first nine games is a great start and this is not a game I’m relishing. I’ve tried to buy their young centre back Lewis Buxton, but with no joy. He’s great and with Eddie Howe alongside him, they’re going to be hard to break down. We’re going back to 4-3-1-2. Let’s hope we’re going back to winning games too. 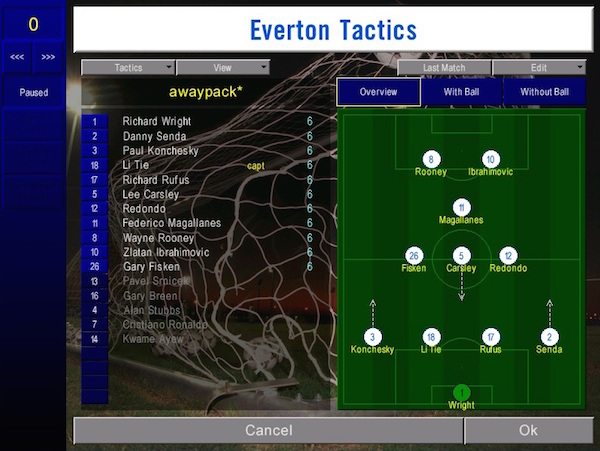 It seems as though we’re in for another difficult day when Mark Burchill capitalises on another goalkeeping error, but with the fight and determination that characterises this extraordinary football club, we claw our way back. A hat-trick from Rooney, what a season he is having, and one from Zlatan secured a much needed win. We should have scored more goals too, but let’s not be churlish. We needed this. 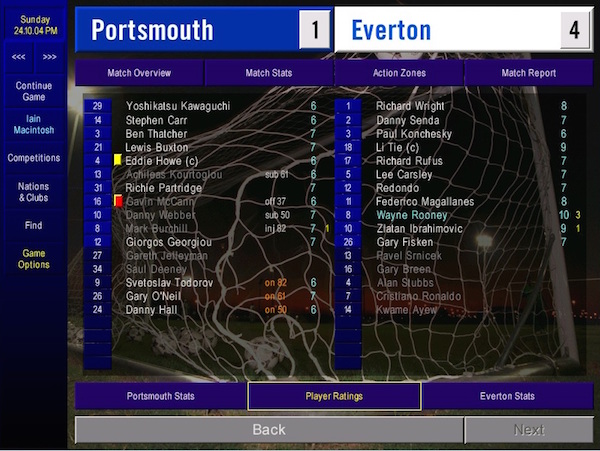 Rooney has been incredible. That hasn’t always been the case. Granted, we had to throw him in at the age of 16, but we’ve never seen more than glimpses of potential. Until now. Ten goals from ten league games is an astonishing record. It’s the first time he’s made double figures in the league and it’s not even Halloween yet. 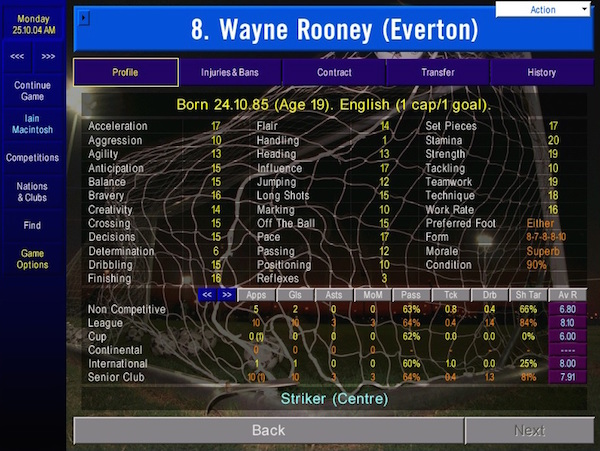 And so to Manchester United, who lead the way already. They’ve not actually won much, just a couple of League Cups and a title, but they’re clearly the best team in the league. They even strengthened in the summer, adding Ugo Ehiogu and Paolo Montero to their ranks. We’ll just go out and do our best. No-one can ever be angry with you if you do your best. 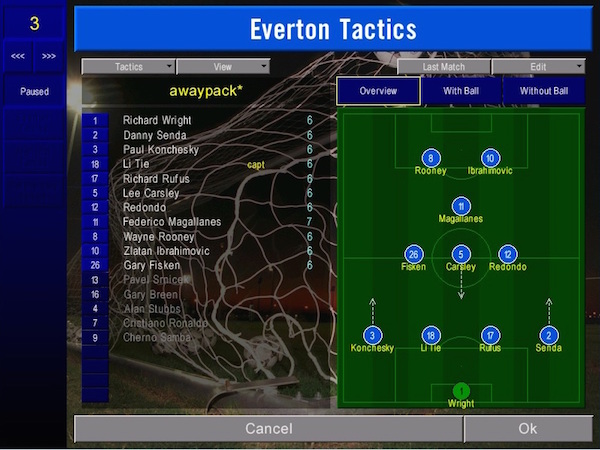 A better result than I expected, and yet it’s another disappointment. When Diego Forlan becomes the latest player to be sent off against us and Zlatan slots home his fourth of the season, it looks like the record 54,224 crowd at Kings Dock are in for a treat. But even away from home, even reduced to ten men, this United side can hurt you. This time that hurt arrives in the form of a Ryan Giggs solo effort, presumably marked with an uncomfortable display of chest hair. Never mind, a point is a point is a point, and you can’t say fairer than that. 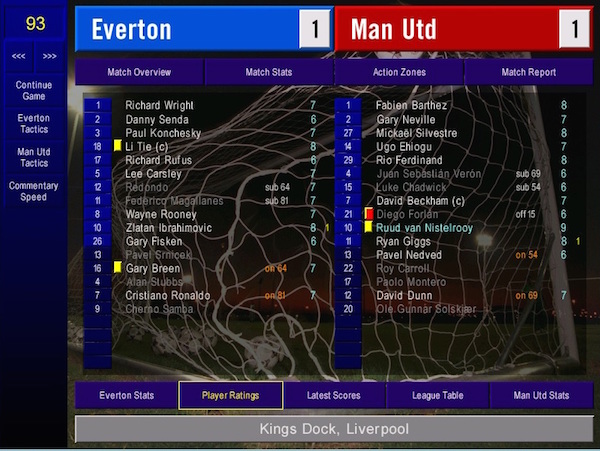 It’s okay. That’s the best that can be said about it. It’s okay. The board asked us to avoid a relegation battle, and we’ve certainly done that for now. But we’re better than that. We should be pushing much harder for a European place. It feels like we’re close, but we’re just not clicking. We get the goals from Rooney and Zlatan, but without the support from Magallanes, with weaknesses that compromise us in the midfield, we lose to often. And on the off chance that we’re perfect up the pitch, we let ourselves down with errors at the back. I think we have it in us to go on a run at some point, but it’s just not happening right now. 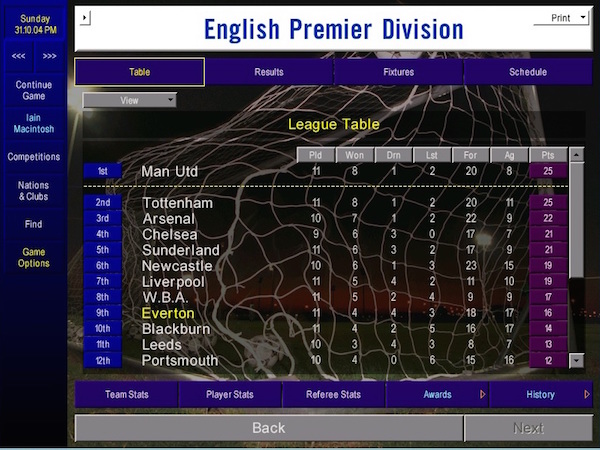 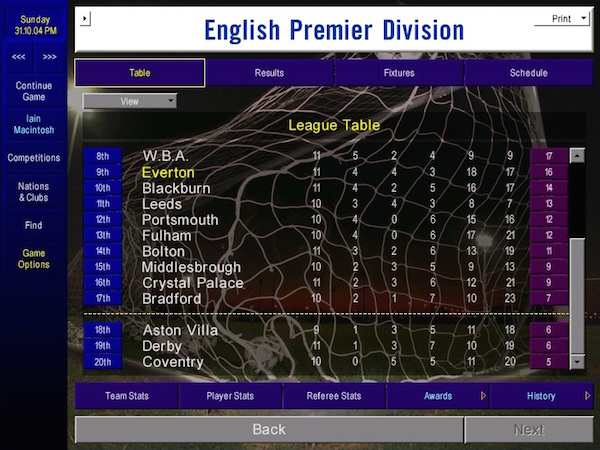 It could be worse, of course. It looks like Duncan Ferguson is already part of the furniture at Blackpool. He’s that shit chair that everyone hates… 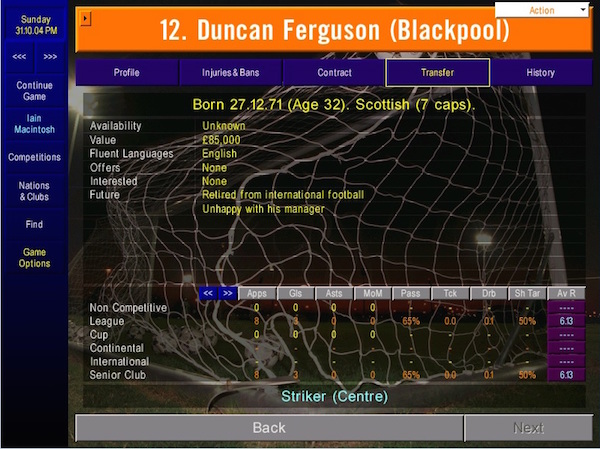