Everton are fourth in the table, technically improved and tactically versatile, capable of playing in two different formations with equal success. But some people still aren’t happy. A relatively successful October, save for that regrettable thrashing at Anfield, brought a mixed response from the supporters, some of whom would prefer a little more consistency in selection.

@thesetpieces WHY ARE YOU CHANGING FORMATION AGAIN FFS!!!! ahem, and yeah Magallanes should play with Ron7 off the bench

However, there is a growing section of support (two people) that feels the tinkering hasn’t gone far enough. And I’m inclined to agree. We know that the three centre-back system often leaves the man in the middle with little to do, and his ratings plunge as a result. There has to be a way to just tweak that area of the pitch a little bit and find some improvement.

@thesetpieces the defensive midfield position is the most overpowered position in the game. Play 4-3-3 and sacrifice a centre half.

@thesetpieces Have you ever considered pushing that 3rd CB forward to a defensive mid position? 2-3-2-1-2 if you will! Dominate the ball.

And what serendipitous timing. We visit Manchester City in the first game of the month and, under Harry Redknapp, they’ve started playing a very odd formation indeed. Mind you, in a league where almost everyone either plays 4-4-2 or 3-5-2, everything that’s slightly different looks odd. But check this out. 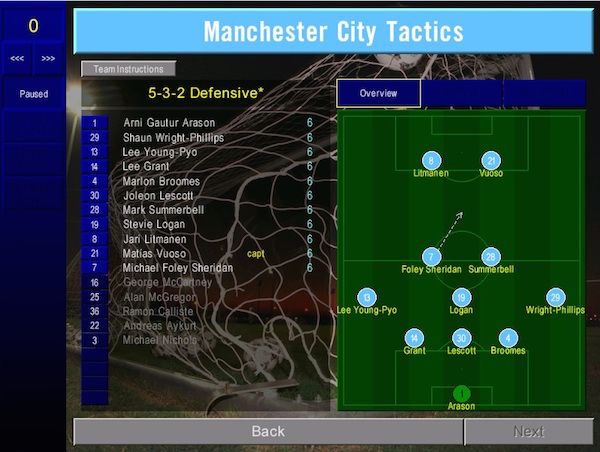 Weird, isn’t it? But what if we had a defensive midfielder to shut down Michael Foley Sheridan, while two defenders go man-to-man on Jari Litmanen and Matias Vuoso? And what if that enables us to release Thiago Motta from his defensive duties, allying him with Federico Magallanes, Wayne Rooney and Zlatan Ibrahimovic in what would essentially be a four man attack? Hmm…. 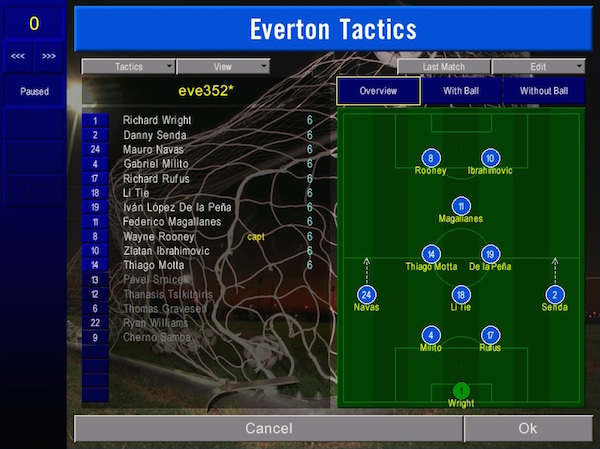 How interesting. It’s not a perfect victory. City do make their own chances, but their defence has to work so hard to keep us at bay. We make 11 chances over the course of the game, which is pretty decent for an away team. With better finishing (I’m looking at you, Zlatan), this wouldn’t have been such a tight affair. And look at Li Tie’s rating. For the first time this season, we haven’t had to carry anyone. Apart from Zlatan. But that’s surely an isolated incident. 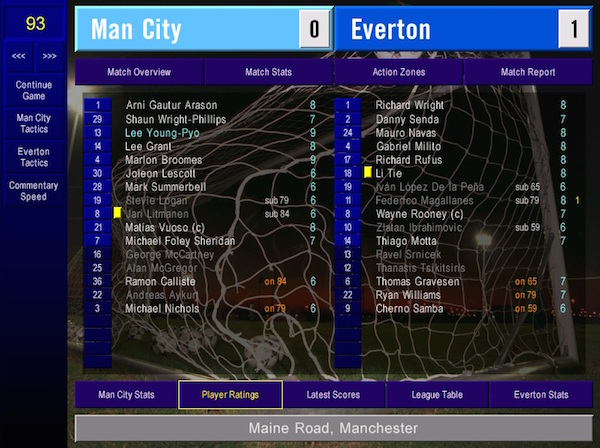 And so to the League Cup, traditionally our first chance of the season to embarrass ourselves in front of everyone. We have Premier League Portsmouth, but we have them at home. Sadly, we will face them without Gabriel Milito and Magallanes, both of whom are on international duty. But it’s chance to resolve this lingering Cristiano Ronaldo issue.

@thesetpieces is it this version where Ronaldo is just average? If so, forget his name and dump him. 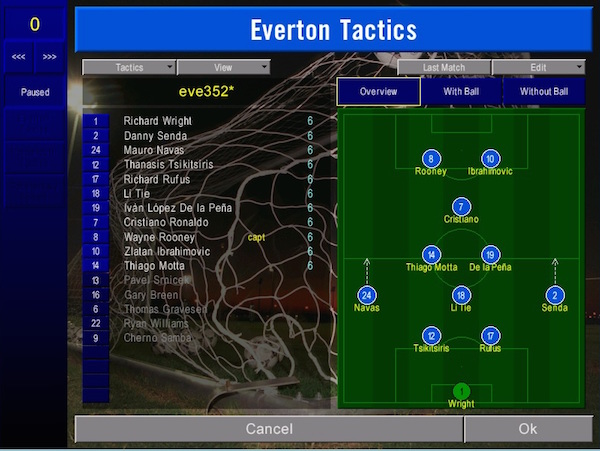 What a very odd game of football. Portsmouth offer little of note, but take the lead early through Stephen Carr. It’s one of those games where you can see your chances accumulating at an eye-watering rate, but you can’t actually score. Do you change what appears to be the right set-up or do you stick with it and hope that the law of averages works in your favour? In this case, as Ronaldo has hit the crossbar twice and we can’t seem to beat Yoshikatsu Kawaguichi, it looks like it’s worth sticking with it. And we’re vindicated. For a time. Goals from Ronaldo and Li Tie give us the lead. But Mauro Navas picks up a knock and I don’t want to risk him further. We have no wing backs on the bench and so it seems like a good idea to shuffle the pack and move to a nice, safe 4-4-2. Portsmouth equalise within five minutes. Thank heavens then for Cherno Samba, our very own supersub, who bounds on and hits the winner. 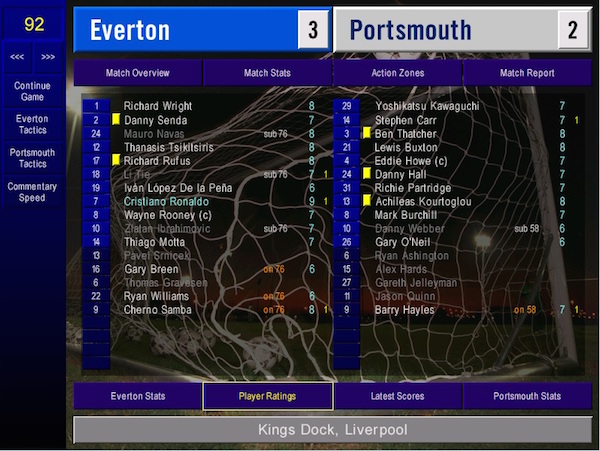 Now, we beat Bradford in the last round of the cup playing an old fashioned, but very effective 4-4-2. So it would make sense to just revert to that formation and do it again, wouldn’t it? But I want to keep testing this shape. It feels good. It feels right. So let’s see what it does. 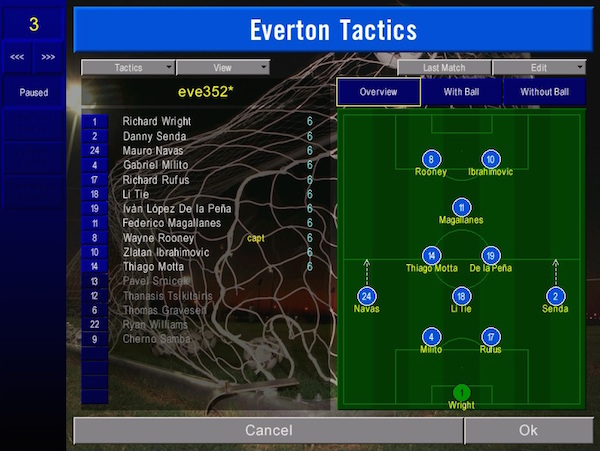 No matter what anyone else thinks, you always know that you’ve played well when the opposition goalkeeper is the man of the match. And yes, it’s true that there were some hairy moments here, particularly with Bradford’s exciting Juanjo running at us, but this was fine. If the boys play badly, I’ll whip them, but I’m not whipping them for that. 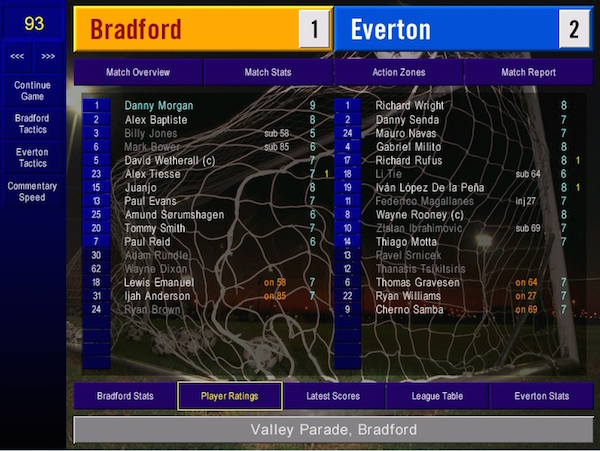 And that brings us to the final game of the month, the visit of Sunderland. We do have a slight disadvantage now. Magallanes, back on form now, was injured against Bradford and Ronaldo is out too. So that means Ryan Williams will get a rare start in the number ten role. I also need to see something from Zlatan, who hasn’t scored in an age and has been subbed off in every game this month. 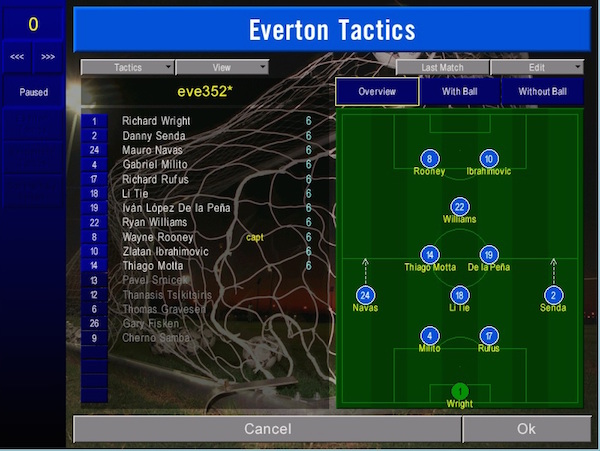 Now that’s a satisfying afternoon at the office, and indeed a satisfying month too. Tore Andre Flo opens the scoring early, but it only makes us angry. And Sunderland don’t like us when we’re angry. We absolutely batter them for the rest of the game with a debut goal from Milito, one from Williams and another from Rooney. Li Tie sits on Pablo Aimar for the whole game and doesn’t let him get up until the final whistle. I think we can safely say that this tactic is working very nicely for us. 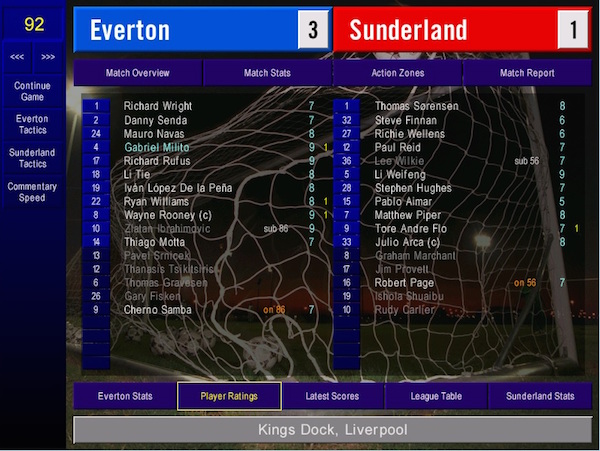 Oh, what’s this? For me? No, you shouldn’t have, you really shouldn’t. But I will accept it and I shall put it on my wall along with my fan mail. 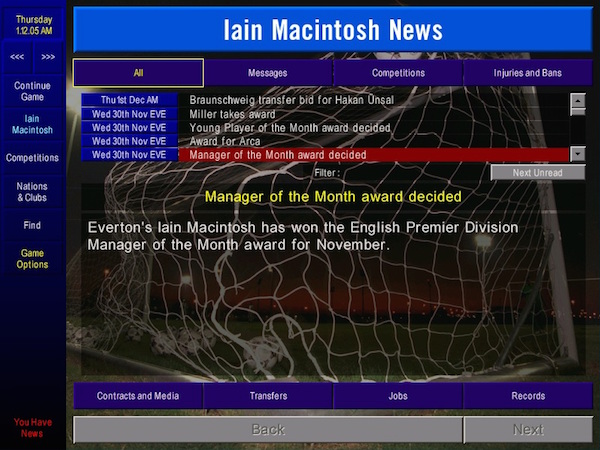 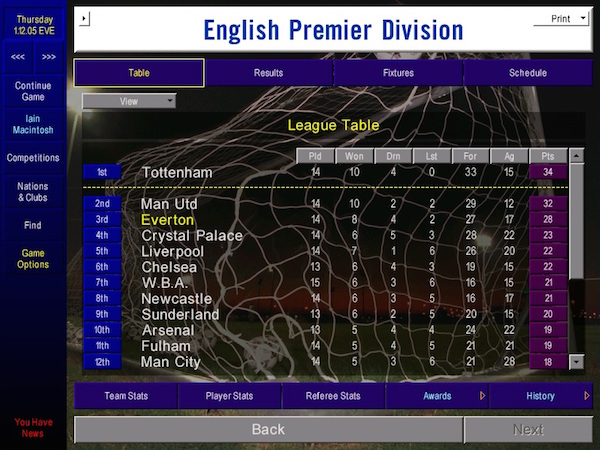 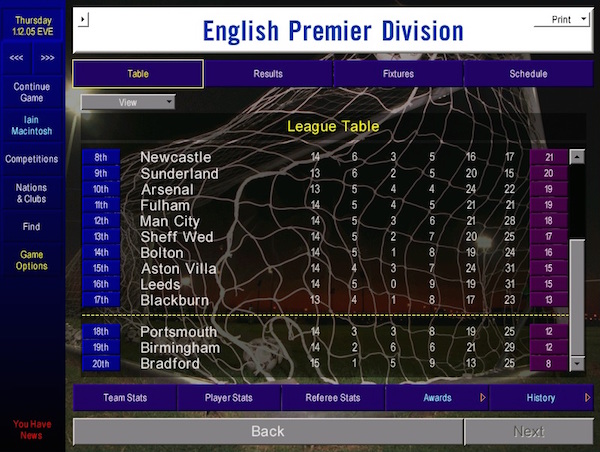