DISCLAIMER: Due to an inexplicable failure to save the game properly after completing October ’03, that episode was re-written. Wherever possible, using whatever means possible, attempts were made to replicate results. However it’s actually harder than it looks to wilfully concede goals. If you read the last episode shortly after publication, you may notice some small changes now. In the league, Everton achieved three more points than before, but crashed out of the League Cup and failed to sell Gary Naysmith, thus intensifying the gathering financial storm. It won’t happen again.

Some good news to open the month: The mystery of the shonky accounts may have been solved. Cast your mind back to the pre-Xmas period and you’ll remember that, despite Everton’s takeover, we had a bank balance like Kids Company. We were haemorrhaging money and we were making more from signed photos of Tony Hibbert than we were from the turnstiles. Enter reader Matt Bell, stage left.

@thesetpieces are you getting no gate receipts because the ~20k fans still safely allowed in are the season ticket holders?

Yes, that makes sense. If we can’t get more than 21,000 through the door then it’s a fair bet that almost all of them are season ticket holders. It’s reassuring to know that nothing is amiss, but even so…we need to get our stadium fixed. We’ve removed the debt (though it looks like it will start growing again in 2004), but we can’t grow until we’ve cemented our revenue streams. That’s the dream. Every small child grows up wishing for the chance to cement their revenue streams.

But that’s out of our hands. What is in our hands is the football. We go to Chelsea, a well funded and attacking side who usually do well against us. They have Mike Duff, which hurts me grievously, and they play in our 3-5-2 formation, which may yet hurt me even more. Paul Konchesky and Ross Forsyth are both injured again and so, despite rumours that he’d been sold, Gary Naysmith returns. 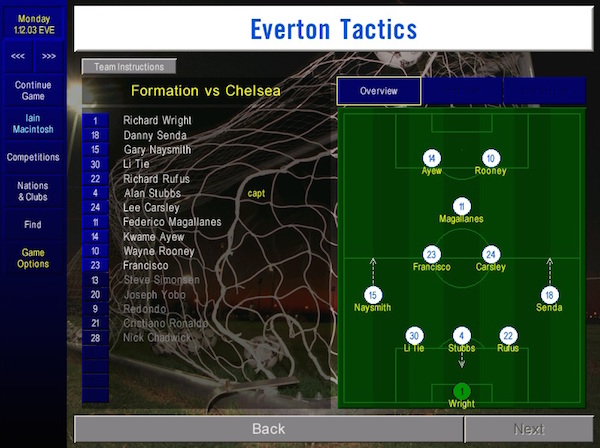 That was brutal. Richard Rufus opened the scoring, rising like an Amish barn to power home a header from a Wayne Rooney cross, but then things got rather out of hand. Eidur Gudjohnsen equalised almost immediately, hit another before half-time and then completed his hat-trick shortly after the break. Kwame Ayew brought us back into contention, but Chelsea were much the better side. We might have been wiser to consider doing something about their scintillating football, rather than just trying to match it. Something to ponder there. 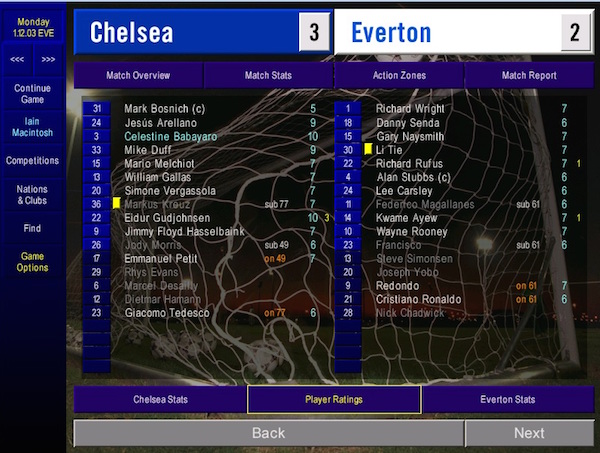 Another London side next and it’s odd Tottenham who come to our much reduced home. You can never tell what you’re going to get from Spurs. They’re a fine side, they play between the lines, but they never seem to sustain any form. Unfortunately, I’ve lost Ayew to injury and so, with my trust in Nick Chadwick at an all time low, I experiment with a Wayne Rooney – Cristiano Ronaldo axis up front. A bigger concern is Richard Wright. He wants a new contract and he’s unhappy. I offer him a fine deal, but I’m nervous about his state of mind and I replace him with Steve Simonsen, just to be on the safe side. 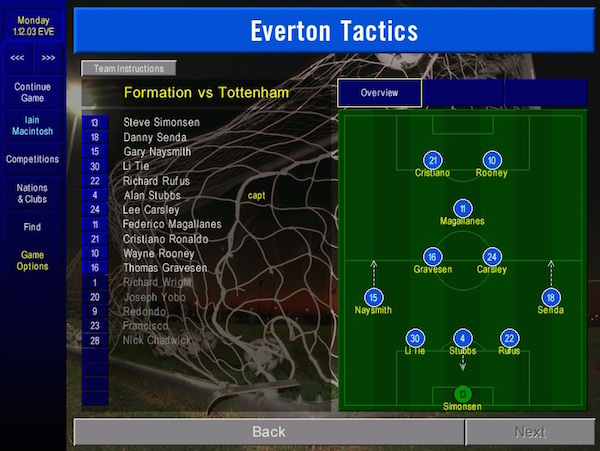 Goodness me, I didn’t expect that. When you’re losing games, everything seems to go wrong, but today everything went right. Christian Ziege helpfully got himself sent off early, Jamie Redknapp got injured, which was a surprise to everyone, and then Rooney opened the scoring. Not content with the generous help they had already offered, Spurs went even further to please us by getting Anton Thelwell to score an own goal. Rooney racked up his seventh assist of the season in the second half, serving up a cross for Thomas Gravesen to make it three and it was all very pleasant. Why can’t every weekend be like that? 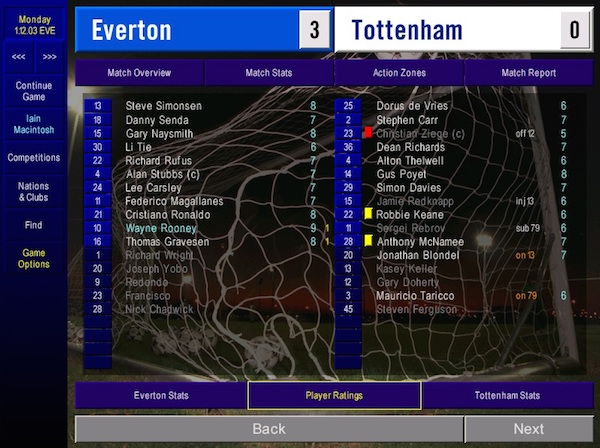 Unfortunately, we won’t be able to play the same team against Sunderland. Rooney injured himself in the closing stages, but this should be the only game he’ll miss. This will be Nick Chadwick’s final chance. Duncan Ferguson missed training again, but I’ve resolved to simply ignore him, given his unfathomable support in the dressing room. Goalkeeper Wright puts pen to paper on a six year deal, which is lovely, but Simonsen kept a clean sheet and retains his place.

Sunderland are unpredictable. They play my 3-5-2 formation as well because they’re now managed by Steve Bruce. He took over when Howard Wilkinson retired in the summer, having secured Champions League football for the Black Cats. We shall not see his like again. 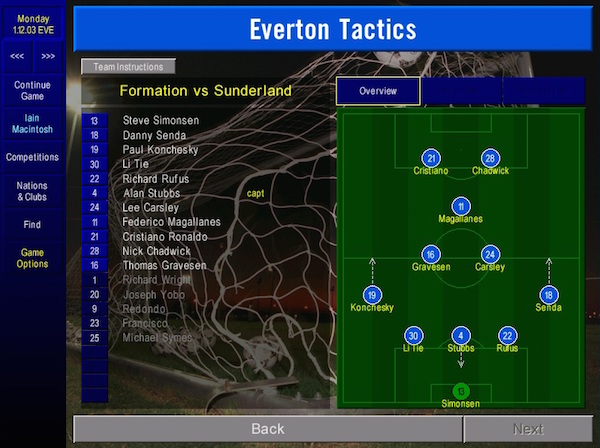 What looks like it could be embarrasing is eventually made respectable, but we leave the north-east without any points. Tore Andre Flo scores early and Matthew Piper adds a second after 19 minutes. Paul Reid is sent off before half-time and we go all out attack to exploit the space. Federico Magallanes gets us back into the game, but just as we seem close to equalising, Piper pops up again to make it three. That boy is some player. Ronaldo makes the scoreline look better in injury time. Chadwick is long gone. I list him for loan in the hope that regular football somewhere might spark him into life. 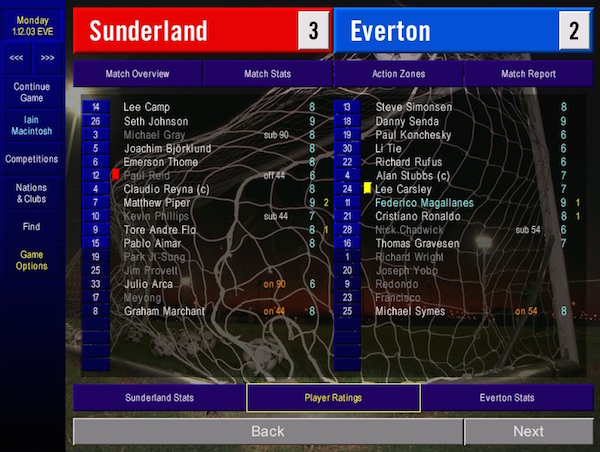 The injuries continue ahead of our meeting with Birmingham. Lee Carlsey is out for a month which leaves us with a choice between the unconvincing “Sam” Francisco or the ageing powers of Redondo. Naturally, I choose Redondo. Rooney returns, thank goodness, so it’s another turn for the Ron-Roon combination. 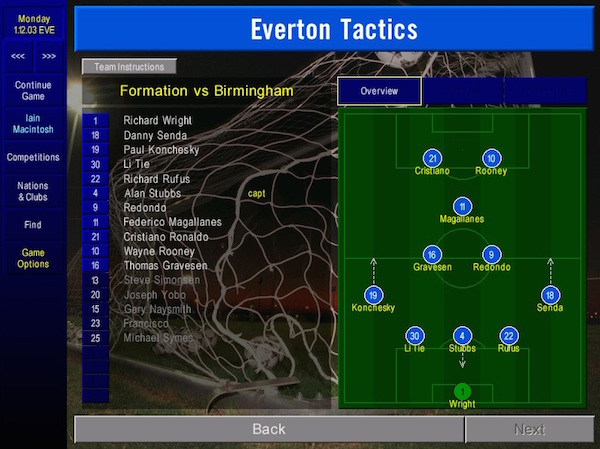 It’s another one of those odd games that seems very easy and then all of a sudden becomes extremely stressful. Alan Stubbs opens the scoring from a set-piece (we’re much better at them since Rooney started taking them) and Magallanes adds another before half-time. Blues’ keeper Jamie Langfield is immense, making a string of saves, but the introduction of Stern John ruins everything. He scores one and nearly adds another. Fortunately, Wright’s two game spell on the bench seemed to intensify his performance and we survived. Three more points and let’s never speak of that again. 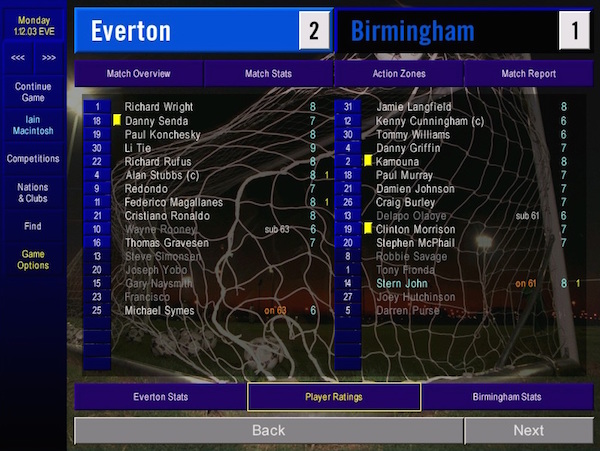 We say farewell to an old friend this month. Paul Gerrard, unused spare goalkeeper for two and a half years, leaves for Darlington. It seemed cruel to keep him here any longer. We have a handful of wretched youth team goalkeepers on long contracts that I’ve never had the money to sack, so we’ll be okay. We wish him well and we really need the £275,000. In other news, my decision to turn down Chelsea’s insulting £4.6m offer for Gravesen has really upset him. I’d drop him, but I’m not happy with Francisco’s work and I can’t take the risk. We have Crystal Palace, who just sacked Joe Kinnear and are really struggling. We can’t slip up here. 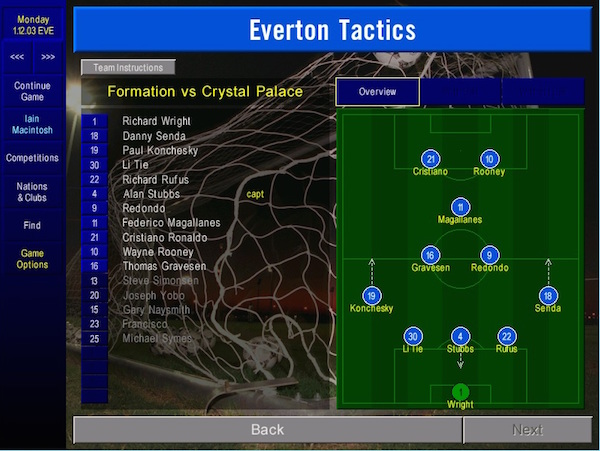 And we don’t. Sort of. It’s an extraordinary start. A penalty for Rooney in the second minute and two more from Magallanes in the five minutes that follow. He hits a third on the stroke of half-time and I consider the game won. Sadly, the players share my feeling and emerge for the second half with cigars out. Dougie Freedman’s warning shot is ignored and when Ade Akinbiyi strikes a second, I take action. We go defensive, just like the good old days, and we see the game out. That was alarming. 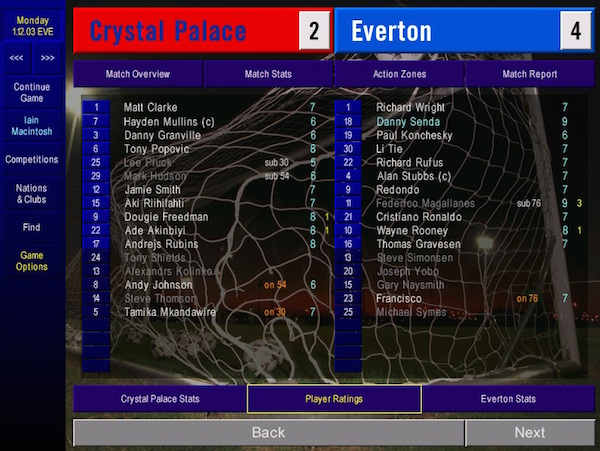 And yet, not that alarming. We find ourselves fourth in the table with 29 points on the board already. Given that our objective was to avoid relegation, that’s pretty good. We’re only three points off the lead, but that’s not really a consideration. It’s strange, we’ve been beaten five times, but lots of big wins have kept us up the table.

The finances are still worrying though. We’re down to £1.7m now, which is hardly surprising because our gate receipts last month brought in a grand total of £12,290. I’ve request a stadium expansion, but nothings happened yet. It needs to happen soon… 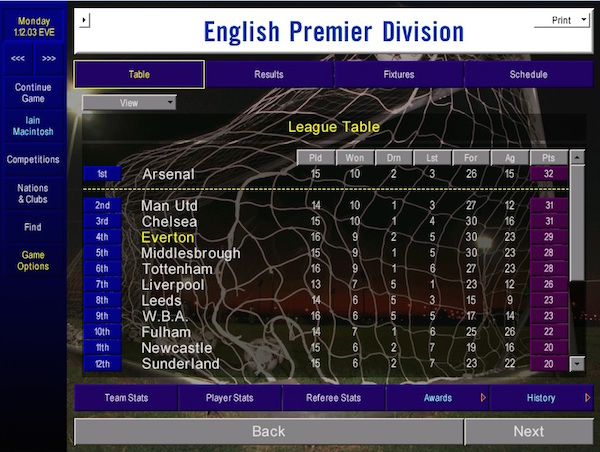 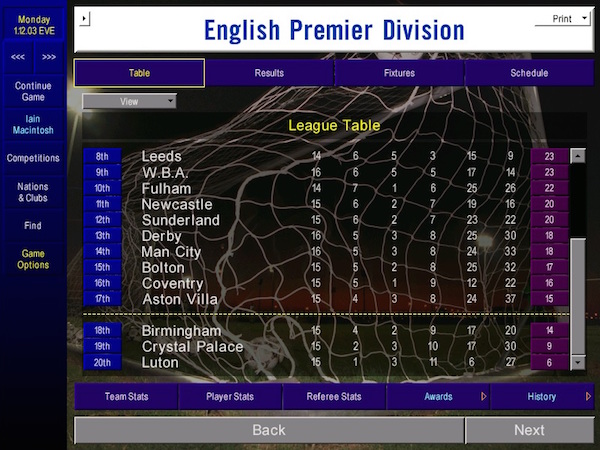