And so to the final furlong. One last chance to make a season of two halves respectable. We were outstanding before Christmas, racing into the top three before plummeting down the table in exactly the same way that Leicester City haven’t. But we are Everton. We have pride and we have standards. We represent all that is good and noble about English football.

Those fucking bastards from Bolton are up first. We thought we had the measure of them earlier this season, but it turned out that they just had a really, really rubbish goalkeeper. Not to worry though; we’re at full fitness now. We’ve got Wayne Rooney and Kwame Ayew up front and we’ve got Federico Magallanes in the hole. We’ve got Lee Carsley and Thomas Gravesen in the middle, keeping things tidy under of pain of pain. Who’s that up and down the flanks? Why, it’s the rampaging young blades, Paul Konchesky and Danny Senda. And in front of Richard Wright, it’s the indomitable trio of Li Tie, Richard Rufus and Joseph Yobo. That is a fully armed and fully operational Everton side and I don’t know what they do to the enemy, but by God, they scare the shit out of me. 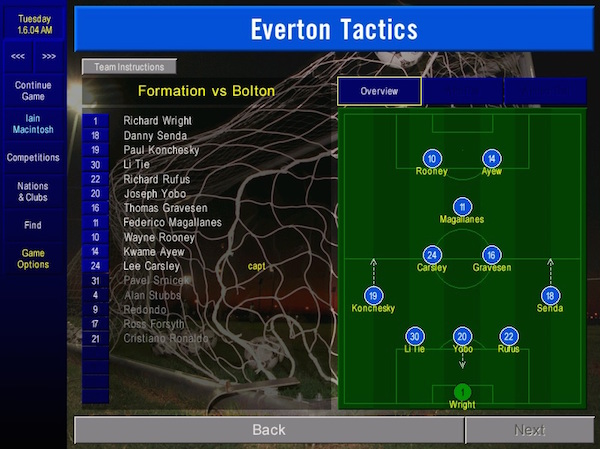 I don’t…I mean, it’s like…what the fuck happened? We didn’t put a single shot on target. We didn’t put very many off target. We did what we always do against another 3-5-2. We man marked the attackers and tried to break out down the flanks. But we got battered. Absolutely battered. It should have been five or six. I think we may need to consider that going head-to-head with other 3-5-2 teams is a bad idea and go back to a 4-5-1 for days like this. I’m not angry. I’m really not angry. I’m just embarrassed. 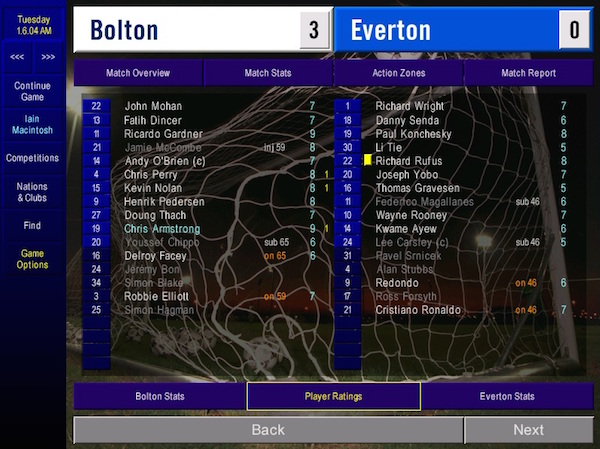 Now, this could have been embarrassing too. When I was hunting for strikers a couple of months ago, I spent a lot of time um-ing and ah-ing about Port Vale’s Stephen McPhee. He’s young, he’s quick, he scores goals at an astonishing rate. In the end, I went for Cherno Samba instead. And what a fortuitous decision it was. 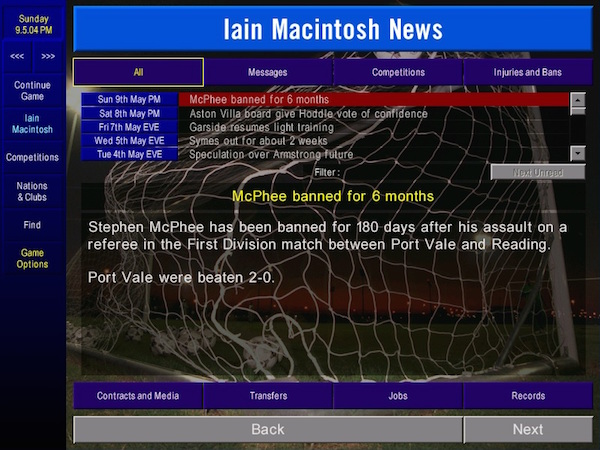 Now, every season there’s a golden game. Just when you’re down, just when hope is fading, you get a fixture that has been hand-picked by the Gods themselves. This year, it’s Luton Town at home in the penultimate game of the campaign and our final game in such a dramatically reduced stadium. Luton are terrible, they were relegated ages ago and all their players want to do is go on holiday and forget about the past nine months. I share their sentiment, but I demand points. I decide to give the starting eleven a chance to redeem themselves and no changes are made. 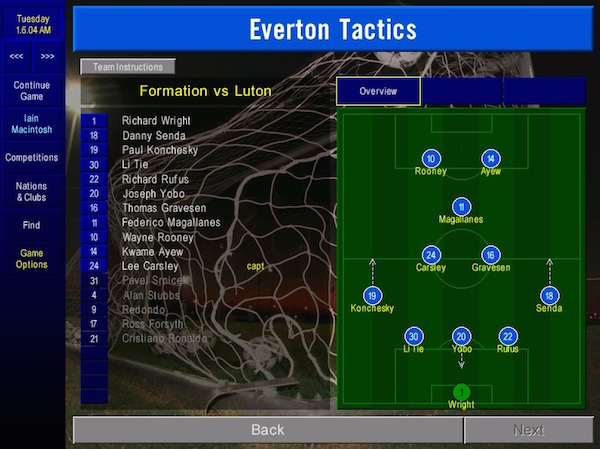 Jesus Henry Christ, that was close. We take an early lead through Magallanes and promptly down tools. Luton have five excellent chances to score before they finally make the breakthrough and grab the equaliser they deserve. Baffled and short of ideas, I make a wild move. Off comes the third centre back, Yobo, and on comes Ronaldo up front. In effect, I turn the team on its head. Luton can’t cope. With three minutes to go, Ronaldo scores. Sixty seconds later, Magallanes adds a third. The scoreboard looks far better than I feel. 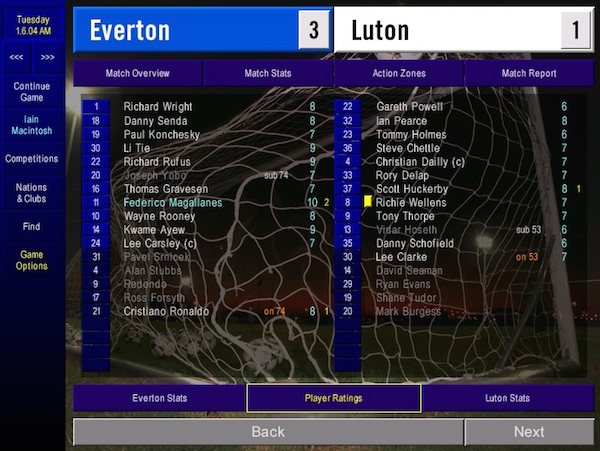 And so to the final game of the season against what I sincerely hope will be a jaded and broken hearted West Browmich Albion. They reached two cup finals this season, they lost them both. Look, here’s what happened in the FA Cup Final last weekend. 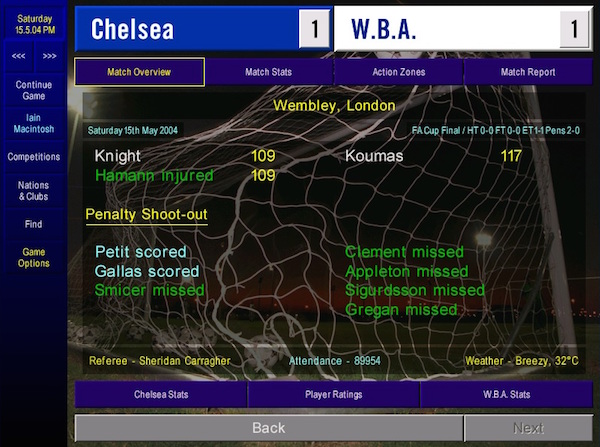 I hope that they have no stomach for the fight. I hope that they just lay down and let us walk over them. Frankly, we’re running on vapours here and we need two weeks in the sunshine, reading Tom Clancy novels and scratching ourselves. 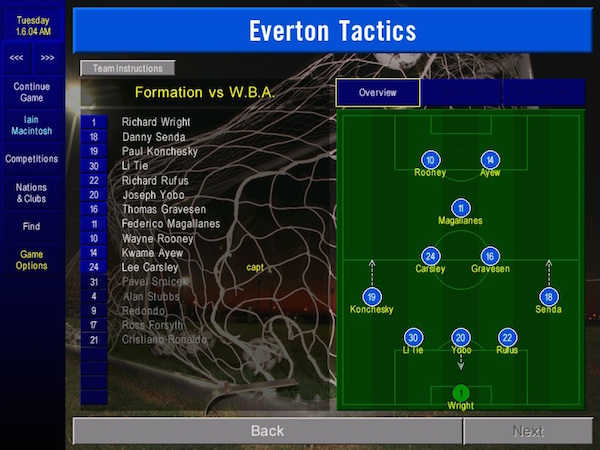 I’m done. I’m checking out. This season has been too much. We didn’t turn up, we didn’t fight the Baggies as I know we can fight. We went a goal down before half-time and offered no resistance whatsoever. I pulled the same trick as last time and removed a defender for a striker, but within moments Richard Wright had tripped Jason Roberts and he was heading off for the second time this season. Lee Hughes put the penalty past Pavel Srnieck and that, I thought, was that. But in the 87th minute, Rooney put a free kick away and in injury time, Ayew equalised from close range. We get a point and it’s enough to stop the Baggies from dumping us down to 11th. We finished tenth. Top half by default. I’d celebrate, but I have standards. Also, Wright’s red card means that he’ll be suspended for FOUR games from the start of next season. This is ridiculous. 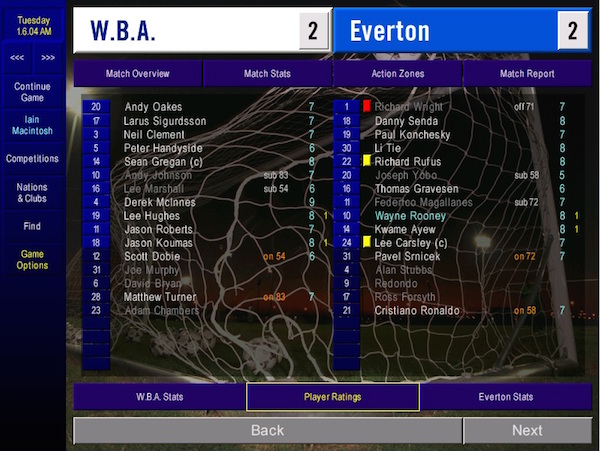 It’s Arsenal who win the title, beating Manchester United at Highbury to clinch it. Not bad for a team with Rami Shaaban in goal. 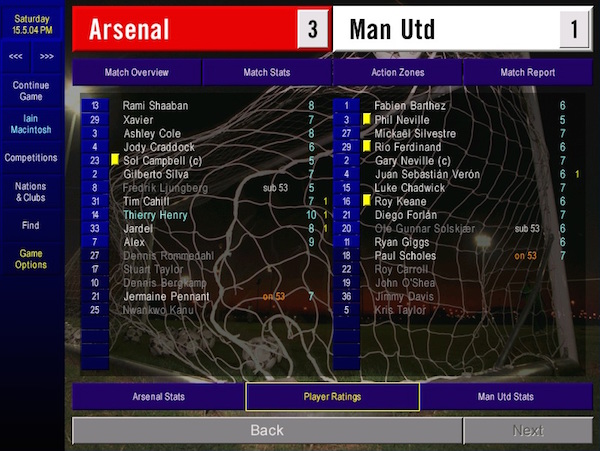 Chelsea win the UEFA Cup on penalties, a result that seals the fabled Houllier Treble for manager Claudio Ranieri. 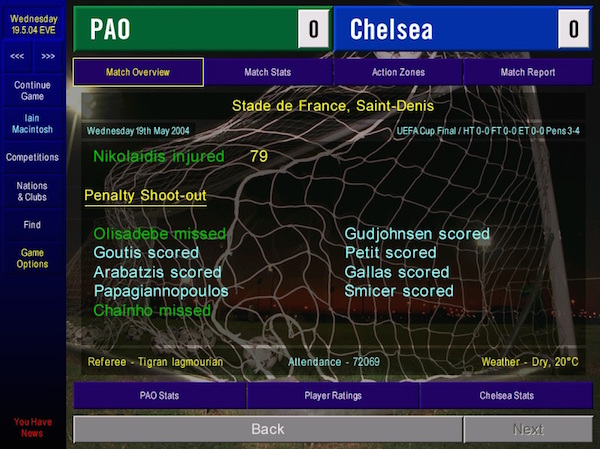 And to wrap up Manchester United’s disappointing season, they lose the Champions League to their old friends Bayern Munich. Picking David Poole was an odd move by Sir Alex Ferguson, it must be said, as was making two changes before half-time, but he does have his ways and there ain’t none of us who’s perfect in this crazy old world. 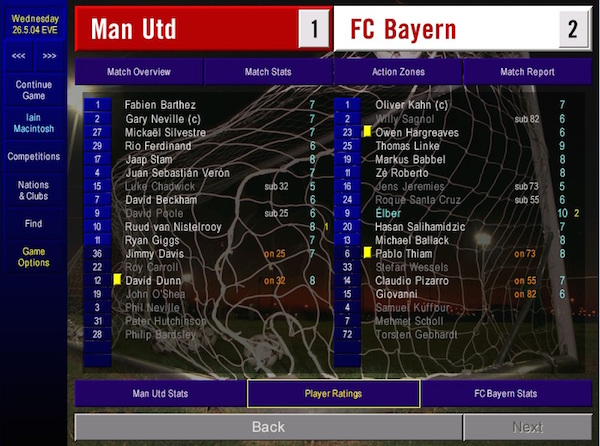 We say goodbye to Micah Hyde this month. In a time of great need, he offered us sustained mediocrity and the odd goal, which is all we could ask for our £400,000 investment. Remarkably, we get £500,000 off Preston for his signature. Now that’s worth celebrating. 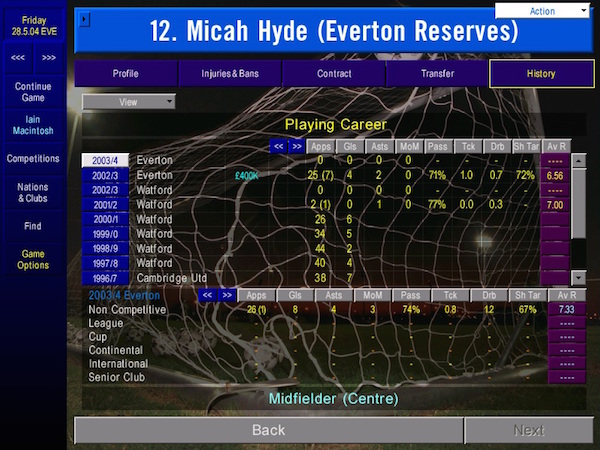 So, congratulations Arsenal and farewell Manchester City, who tumble down with Birmingham and Luton. We’ve got £2.8m in prize money, which lifts our bank balance to within a million quid of zero. I guess there’s a lot to be said for that. We will return for the traditonal debrief article with all the statistics, not to mention the start of Euro 2004. Can Trevor Francis’ men finally end 38 years of hurt? Not fucking likely. 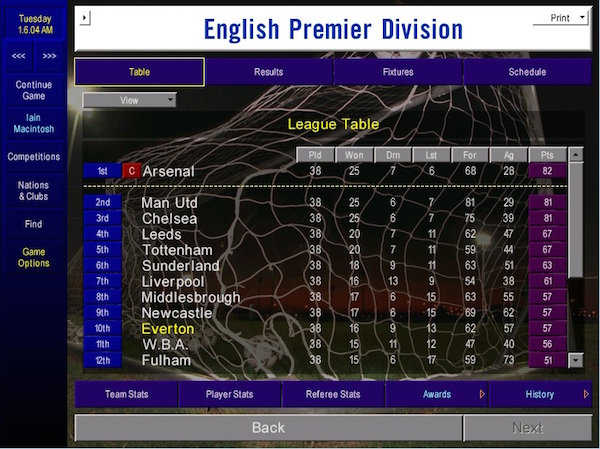 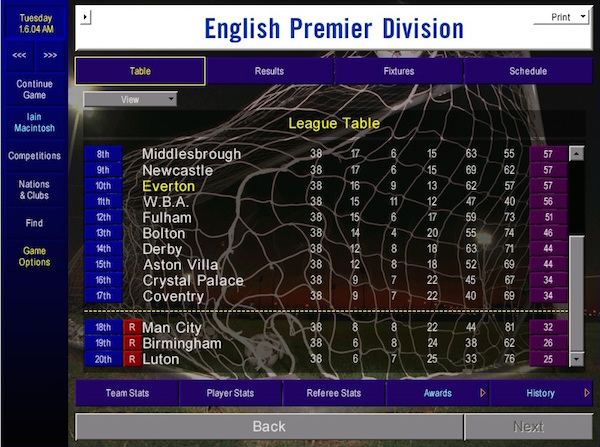