There’s no doubt about it; this has been the hardest season yet. It’s been harder than the days when we didn’t have a pot to piss in and, even if we had had a pot, we’d have missed it and pissed on the floor. But through it all, you’ve been there by my side. I could not be who I am without you and without your support. The love that you give me, I return with compound interest. Just look at the backing you’ve given me.

@thesetpieces This used to be enjoyable. Now its a platform to see who the next ill thought out panic buy is. #MacintoshOut

@thesetpieces @iainmacintosh have you been rightly sacked on CM0102 yet? Hoping you and Martinez both get sacked soon!

.@thesetpieces @iainmacintosh Is it possible to send a plane over Evertons stadium with a 'Macintosh out' banner? I'll fund it. Patch it in!

@thesetpieces The way Rico Magallanes has been treated this season is disgusting. The man deserves better.

Because of our general uselessness, international fixtures, cup ties and the inconvenient structure of the month, we have only two fixtures in March. And then six in April. But a home game against Portsmouth does feel like a good opportunity to get back on track, even if they are four points above us in the relative safety of 11th.

Now, I’ve listened to your criticisms and I concur; there’s too much tinkering by half. I’ve been trying to achieve perfection, but with the players I’ve left myself with, that cannot be done. I just need points right now and for that I need consistency. And so, for the third successive game, we’ll play with the back three. Tony Hibbert will come in for the injured Gary McDonald and Tomas Gravesen’s suspension is complete, so he’ll come in for Gary Fisken. Let battle commence. 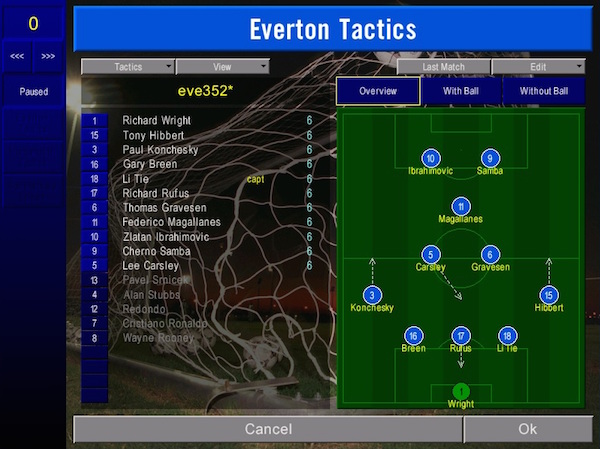 For the first time this season, a stroke of outstanding fortune. Federico Magallanes goes through on goal, Yoshi Kawaguchi wipes him out and referee Neale Barry has no hesitation in sending him off. All in the first minute. Zlatan steps up to fire home the penalty and we’re off. There’s just one problem: Portsmouth’s reserve goalkeeper Saul Deeney is better than the man he replaces. Obviously, we dominate the rest of the game, but Deeney is equal to everything. Three centre-backs on one attacker feels like a waste, so I bring on Wayne Rooney for Richard Rufus at the break and Cherno Samba duly scores a second. But even though we should be five or six up, we end up squeaking home when they score a late consolation goal. Nothing is ever simple. 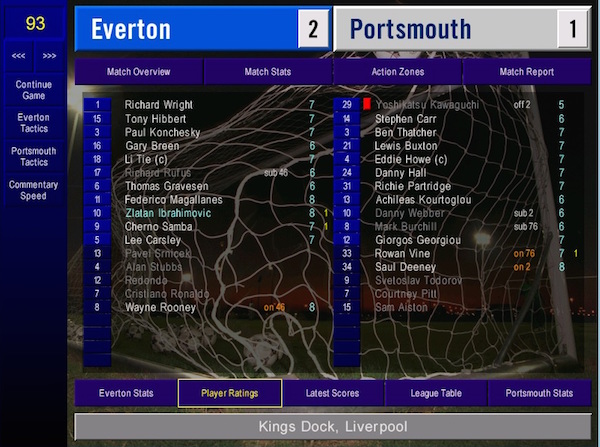 It’s a good result though and it lifts us away from the drop zone. Not too far from the drop zone, admittedly but six points is as good a cushion as we can ask for after the soul-sapping carnival of shit that we’ve put on this season. There’s a two week break before we play Chelsea, who will play two more games before they get round to us, and it’s a chance for the players to rest their legs. For me though, it’s a chance to plan ahead. I’m still torn as to how we should play. In England, 4-4-2 has always been good enough for Arsenal and Manchester United, though it’s Chelsea who currently lead the way with the same formation we use. AC Milan are dominant in Italy with that attacking 3-5-2 as well. In Germany, Dortmund are topping the table with a diamond formation. I’m not rushing into any decisions, but I’ve got scouts scouring Europe and I’m not ruling out a return to 4-4-2. For the rest of the season though, we’ll stick with what we’ve got. Hopefully Chelsea will be tired and they’ll take it slow. 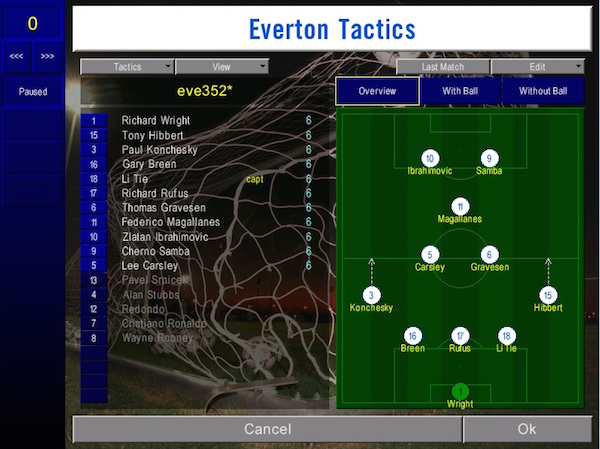 Chelsea aren’t tired and they aren’t slowing down. And we’re only too happy to help. Li Tie pushes Ediur Gudjohnsen over after five minutes and Jimmy Floyd Hasselbaink scores the resultant penalty. Then, 15 minutes later, Gudjohnsen gets one of his own. We don’t put a single chance on target and in the second half, Gudjohnsen adds another. So, it’s pretty much just a reassertion of what we learned last season: You can’t beat the big teams away from home with a 3-5-2, it’s just reckless. Still, at least we’re consistent. 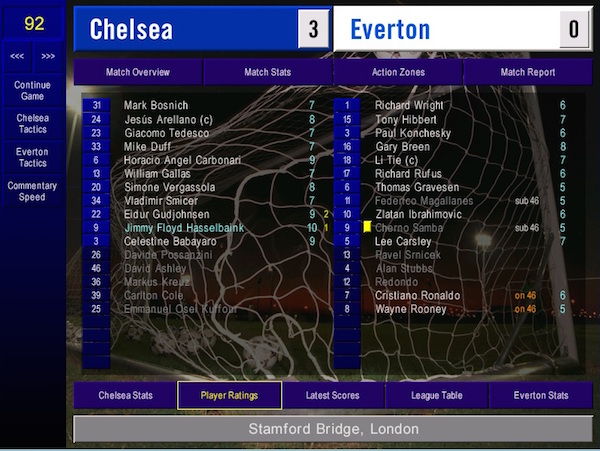 The real tests will come next month. We’ve got Coventry and Blackburn, and if we can’t get a win off either of those, we’ll deserve to be in a relegation battle. But we’ve picked up six points from our last four games, including trips to Elland Road and Stamford Bridge. I’m happy enough with that. And I haven’t felt happy for a very long time. 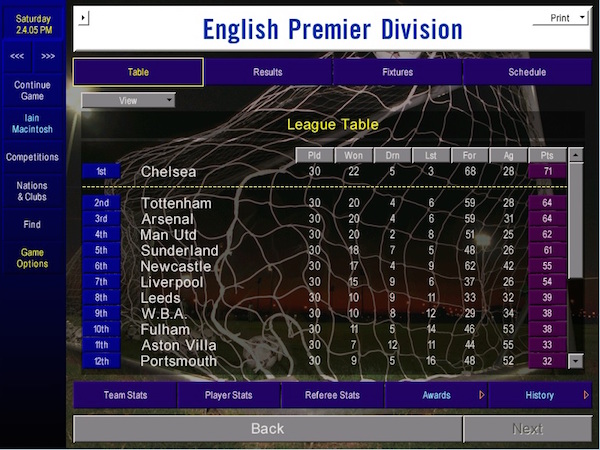 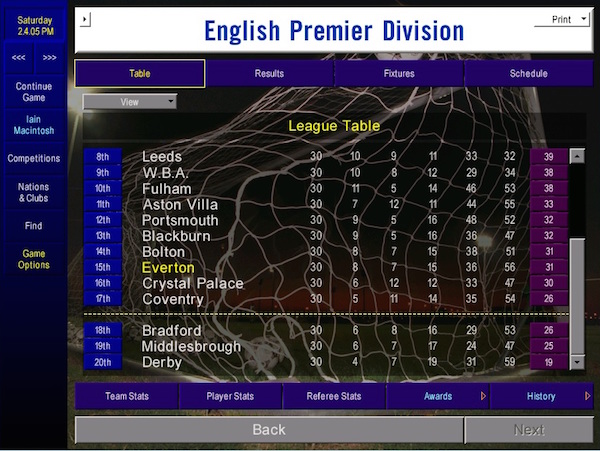