This has been a very pleasant season so far. The mood has really changed on Merseyside. Everywhere you look, there are young Scousers with bright blue Cristiano Ronaldo shirts on their back. And a simple statement of belief in my young superstar results in an outpouring of affection from the supporters and from my chairman. Yes. Let the love flow. 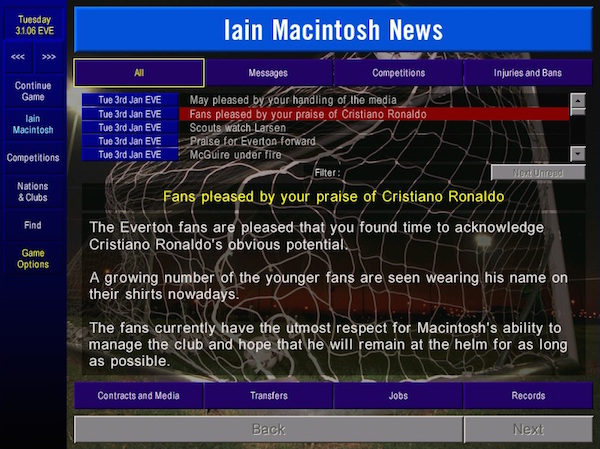 But we cannot rest on our laurels. There’s still time for us to screw this up. Today, we travel to Old Trafford for a clash with the runaway league leaders. We’re still without Wayne Rooney, but everyone else is fit and now that we’re locked into this strange 4-4-2 diamond-sort-of-thing, we don’t need to overthink the tactics either. Let’s see what John Toshack’s team are made of. 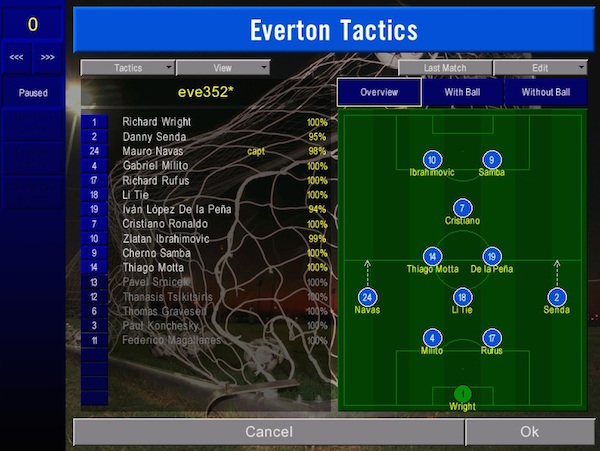 Well, that is infuriating. And it’s not the first time it’s happened either. I’m not going to stand here and say that we were robbed of a victory, because that wouldn’t be accurate. United were worth their win and they played very well. But there has to come a time when we make more of the chances we have. We have Zlatan, we have Cherno, we have Ronaldo. We should be scoring more. And we need to talk about Richard Wright. You know as well as I do that he’s always been one of our few very good players…but is he top class? Is it possible that he’s a very good goalkeeper for a struggling top flight team, but not consistent enough for a team that actually stands a chance of winning something? Just look at the match stats. If this was an isolated incident, I’d take it on the chin. But it’s not. This is a weak spot. 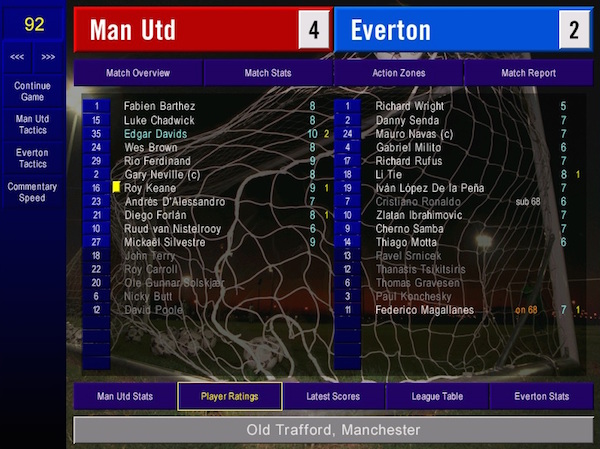 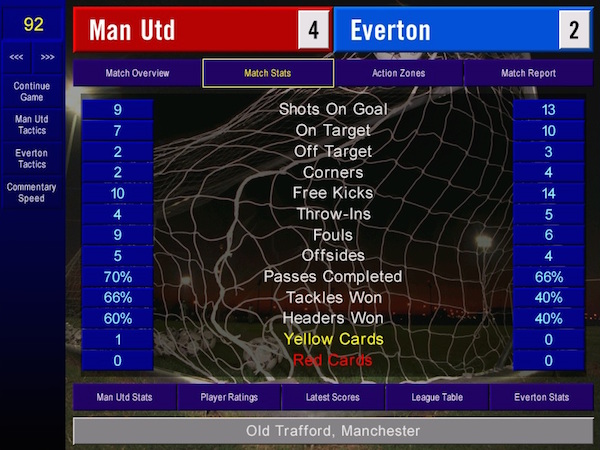 Sadly, there’s nothing we can do about it right now. Having spent quite a lot of money over the summer, we’re already into the overdraft, so any talk of a replacement will have to wait until the end of the season. We have Pavel Srnicek and Tony Roberts in reserve, but I’m not convinced that either of them would represent an upgrade. They’re both set to retire in June. We’ll have to push on. It’s the FA Cup and we have second flight Leicester, a fairly unthreatening proposition. We’ll rest Mauro Navas because he tires easily and rotate out Ronaldo for Federico Magallanes, who I’ve noticed plays much better when he’s been dropped. 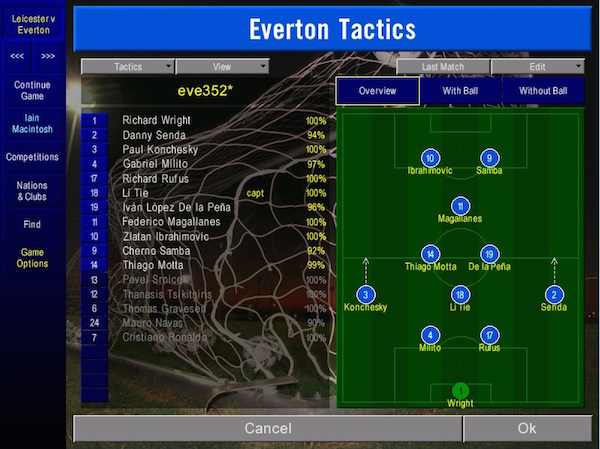 He does play well, but it’s not enough. It’s not enough because we are struck by the same poxy issue again. They make hardly any chances, we make loads and we’re taken to a replay. I am struggling to make eye contact with Wright now. He’s like a faithful dog who has suddenly started to unload his bowels on the carpet every night and if I look in his eyes I’ll see that he knows, he knows on some level, that his next trip to the vets will be his final one and I just can’t take that risk because, like him, I can’t promise that I’ll be able hold my shit together. 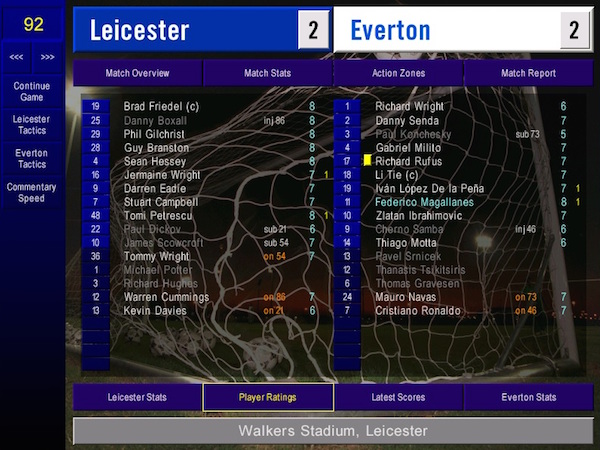 There is a chance for respite at the weekend when Fulham come to play. The Cottagers have traditionally stood with us in the middle of the table, but while we’ve kicked on, they’ve slipped back. Li Tie is suspended, so I’m going to bring back Lee Carsley, now in the final year of his contract. We’ve lost Samba to injury, but Rooney is back and obviously, after Paul Konchesky’s hopeless performance in the cup, back comes the refreshed Navas too. 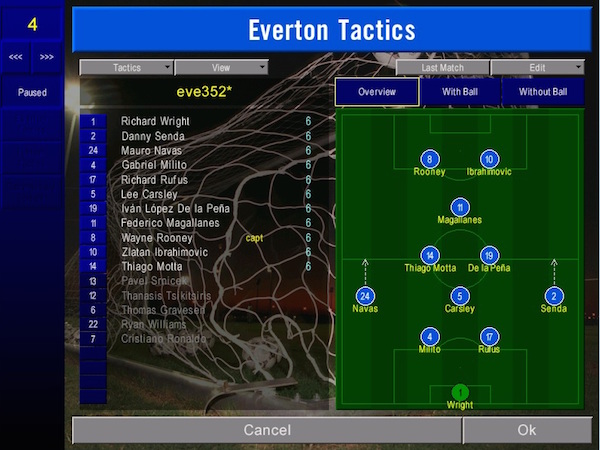 This was much better across the board. Wright actually played well for once and we were comfortable throughout the game. We lost Rooney very early, but Ronaldo performed admirably up top and we even had a brace of goals from Zlatan. I wish every game could be like this. It’s so relaxing watching the scoreboard turn over. 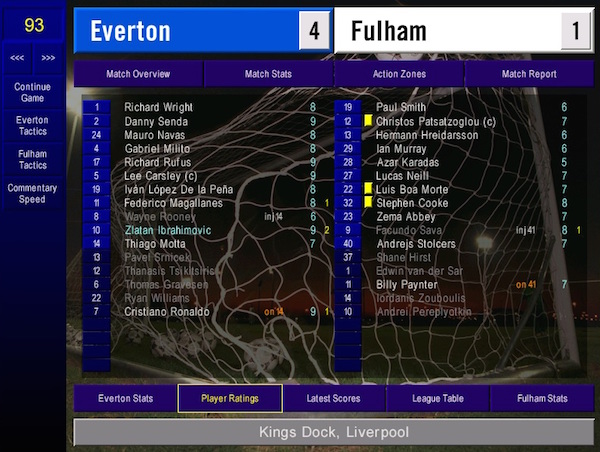 We will, with good reason, go with our strongest possible team in the replay against Leicester. The objective is, of course, to actually win something and this is as good a route to silverware as anything now. Ronaldo will stay up top in the absence of both Rooney and Samba. Michael Symes, still on the books, will sit on the bench. Carsley, magnificent against Fulham, retains his place. Now let’s go and deal with this. 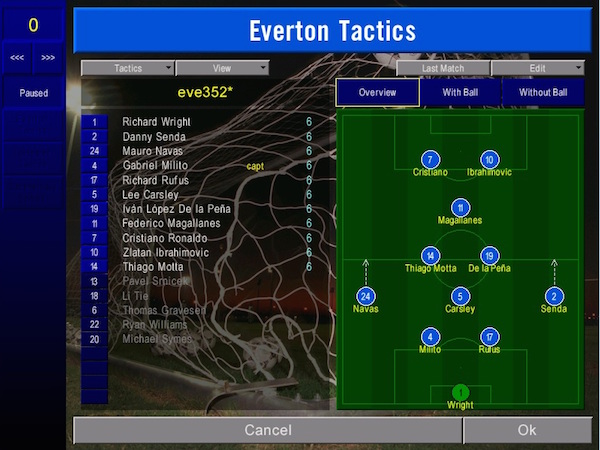 We really don’t make things easy for ourselves. A good start, a De la Peña free kick, a flurry of chances and no crucial second goal. And then they score with their only chance of the game and take us to extra time. It’s dealt with comfortably enough, but that’s not the point. Now we’re going to be knackered for the Leeds game at the weekend. We need to be more ruthless, we need to kill games quickly. And we really, really need to think about buying a new goalkeeper this summer. 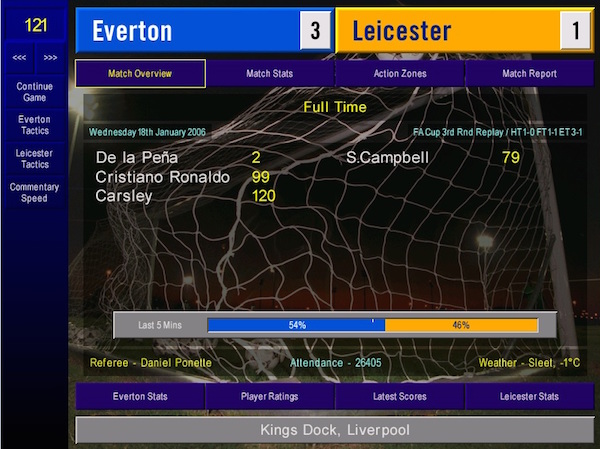 And that sends us to a resurgent Leeds in less-than-ideal condition. Now that Venables has moved on, Leeds are playing to their potential again. We need to be at our best if we’re going to get anything out of this. But we’re down at 85-90% fitness. We haven’t got a squad that can cope with this many games. Through December and January, we’ve played 15 matches. It’s too much for us. 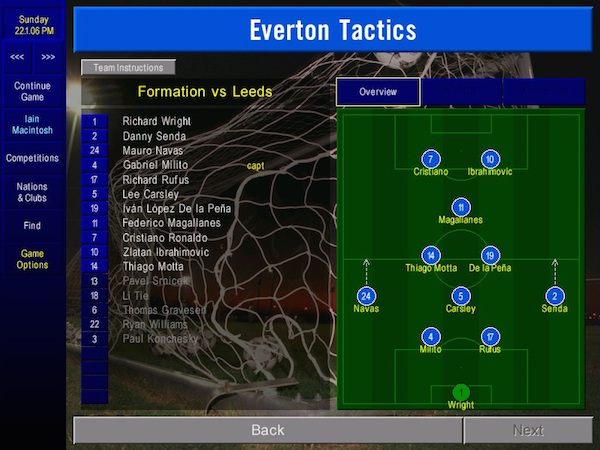 As proven here, in figure A. I’m impressed with the spirit in the team. Every time Mark Viduka scores, we’re back in contention within ten minutes. Leeds are never allowed to feel as if the game is safe. But they lead for all but the first two minutes of the match. They’re really very good now. We can’t give any more, but it’s not enough. 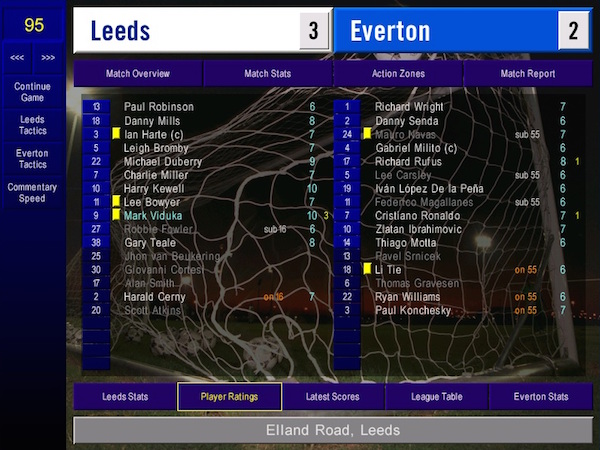 We’re straight back into FA Cup action on the Saturday, and yet we’re supposed to play Newcastle in the league on Monday. I cannot fathom why the authorities are allowing this to happen. This would test even the largest squad in the league, let alone our group. But we’re not going to moan about it because that’s not how Everton conduct themselves. We’ve been through the storms of financial apocalypse and we’ve marched out the other side with our heads held high. If those bone-headed, intellectually derelict administrators want us to play two games in three days, then so be it. 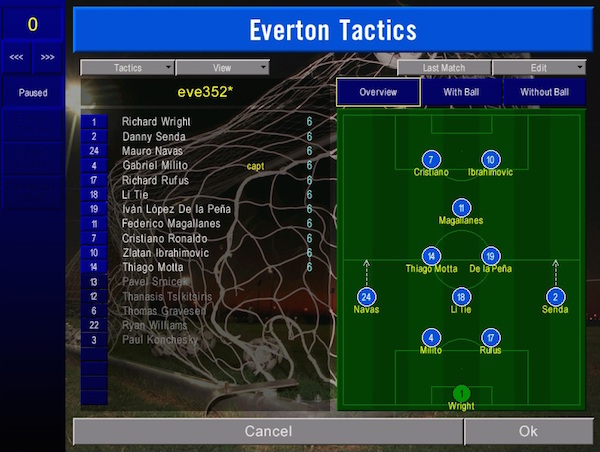 Bastard Bolton are dealt with, slain by the sword of Danny Senda. He hits two early individual efforts to give us the cushion that enables me to swiftly withdraw players I need fresh for Monday. Dean Ashton spearheads a briefly concerning comeback, but then Ronaldo scores for the fourth game in succession and everything is all right again. We’re through to the fifth round. Maybe this is our….no. I shan’t say it. 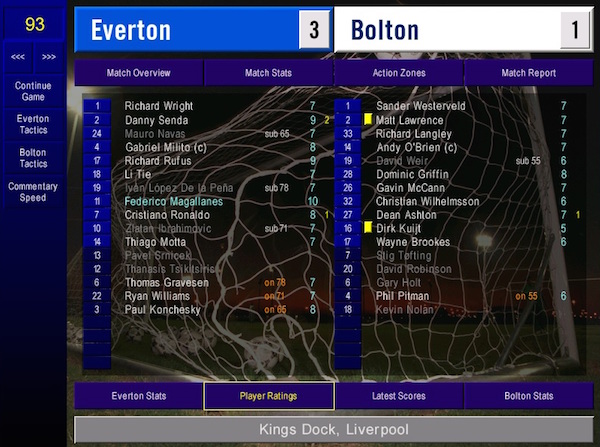 We don’t even bother getting changed after Bolton. We just stay in our kit and wait in the dressing room for Newcastle to turn up. With so many injuries, and so few fringe players that I can completely trust, I feel that we’d be better to play at 90% with the core of the squad. They can rest in the summer. I trust them. They’re already heroes. Except for Wright, obviously. 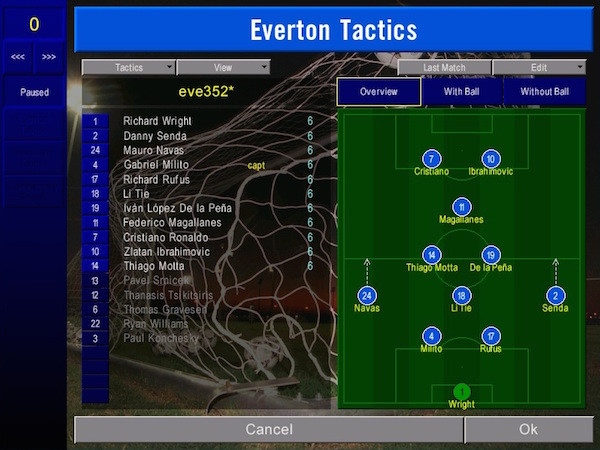 Sometimes, there’s really nothing you can do. Magallanes, that well known hatchet man, is dismissed after just 24 minutes from what appears to be a simple foul on Titus Bramble. There is no mention of high feet, recklessness or anything that would even prompt a booking. But it’s a straight red. With eleven men, I’d back this lot to get something off a very good Newcastle side. With ten, it’s always going to be very, very difficult. We hold out until the 81st minute and then our resistance breaks. I am informed that Magallanes will receive a three match ban. To nobody’s surprise, I appeal the decision. It will almost certainly result in the overturn of the ban. But it won’t bring back today’s game. 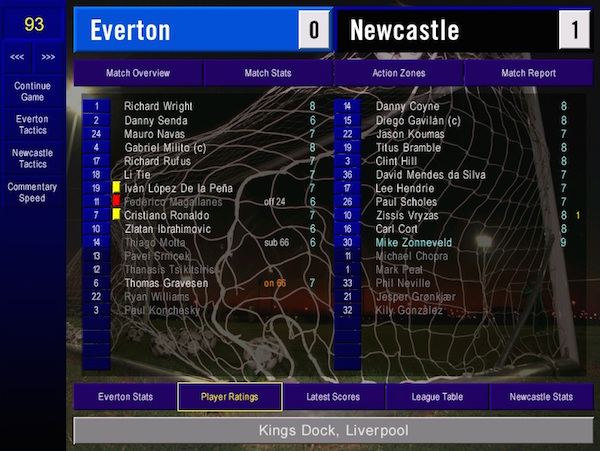 We’ve lost ground on Tottenham and we’ve allowed the chasing pack to close up behind us. You can see that in two different ways. You could say that we’ve squandered our chance to mount a title bid and that we should be crushed by own fecklessness. Or you could look at that league table and see Everton in contention for a Champions League place. You could see that only Manchester United have scored more goals. You could remember last season and the fight against the drop. And you could acknowledge that we haven’t given up yet. We’re still in this. We will stiffen our resolve and we will claim our place in the top four. 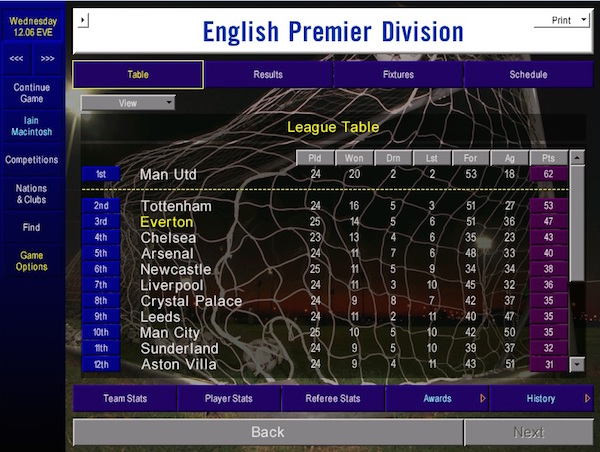 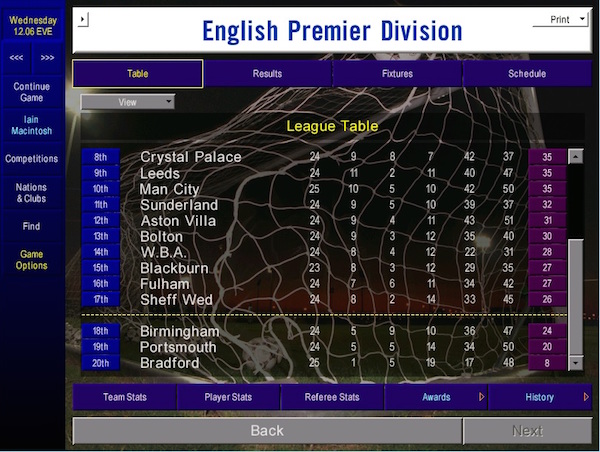