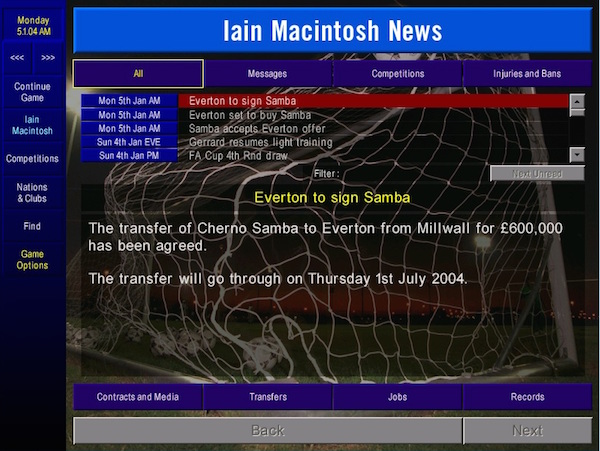 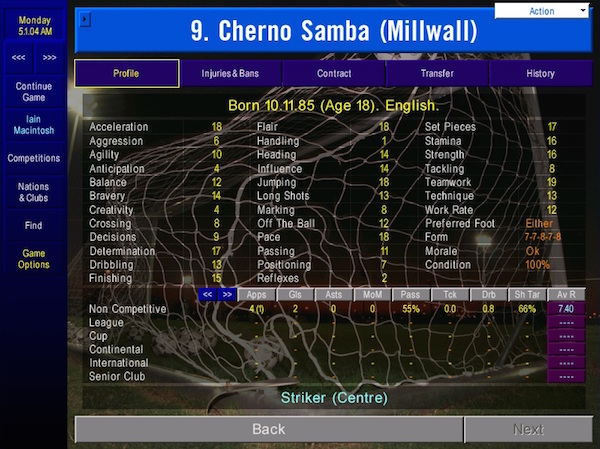 Yes, we did say in the standfirst that there would be no Cherno Samba, but that was a reference to Everton’s financial problems and the inability to sign promising players from the start. But we’re three years in now and if Millwall want to keep this mercurial talent in their reserves, refusing to play him in a single game in any competition, that’s their lookout. We’ve got enough problems without cutting off our nose to spite our face. He will join in the summer and I have high hopes for the 2004/05 campaign.

That said, we might not get that far. We’re in good form and we’ve had a kind draw in the FA Cup, pitting us against non-league Chester City. Could we go all the way to Wembley and finish this challenge before Cherno has settled into his new digs? It’s down to the boys, particularly the fringe players who will get a run out here. Can they prove a point? 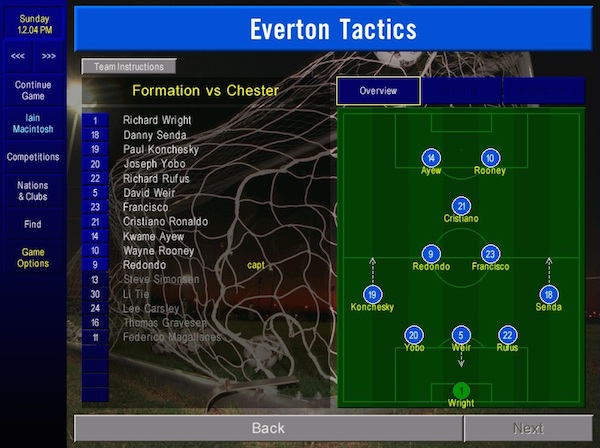 Well, sort of. It’s a dominant performance and we’re not short of chances, but it’s never really comfortable. Mark Ovendale in the Chester goal puts in the performance of his life and we’re held at bay for an hour before the breakthrough comes via a Kwame Ayew header. Another follows from Wayne Rooney, but the relief is short-lived. With their only shot of the game, Neil Murphy puts Chester back in the game. We hold out, of course, but it would be nice to have an easy afternoon for once. 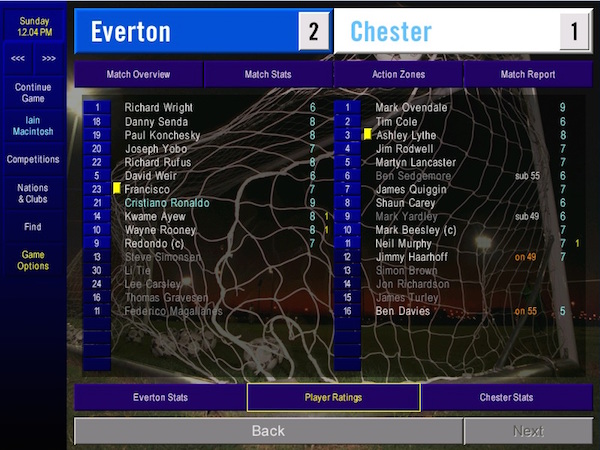 The big names return for Aston Villa in the league and we can’t afford any complacency here. Li Tie has been phenomenal this season and you really can’t be afraid of anything when you have Lee Carsley and Thomas Gravesen in your corner. Goal machine Federico Magallanes returns to the team too, with Ronaldo still being used sparingly. We don’t want him to get delusions of grandeur and slowly turn into some kind of giant preening tit. Not at Everton. 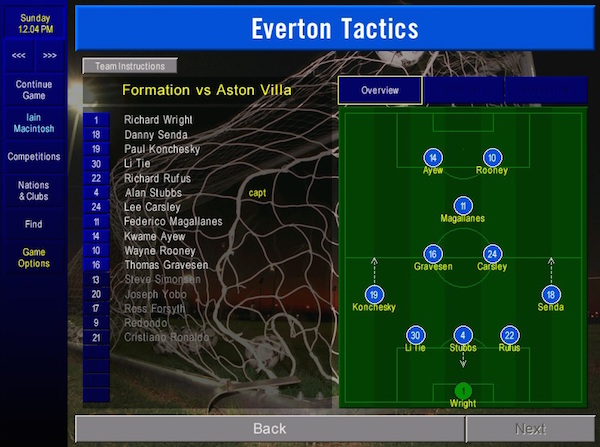 And there was the easy afternoon I had been looking for. Thank you, Neil Sullivan. Everything we hit went in. A long shot from Carsley. A long shot from Magallanes. A free kick from Wayne Rooney. Sullivan let them all slip through in the first half and the second half was a doddle, save for an obligatory slip up and a Gareth Barry goal. It wouldn’t be Everton if we didn’t concede at some point. It’s January, the season is more than half complete. We are second in the table. 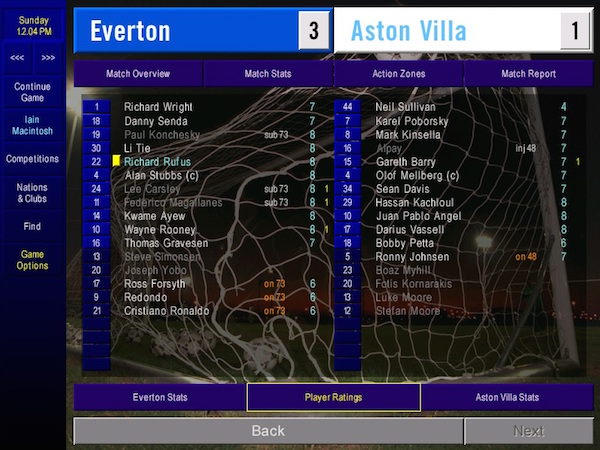 With the bank account still shrinking, it’s time to shift some old faces. I shall weep for you, Tomasz Radzinski. Scorer of 16 league goals in our incredible first season, the Canadian hitman would score only two more in his Goodison Park career. I don’t know what happened. His attributes didn’t drop, he didn’t get injured. He just…faded. Well, the £2m will come in handy. In that it will keep the club in the black for approximately six weeks. Good luck, old friend. 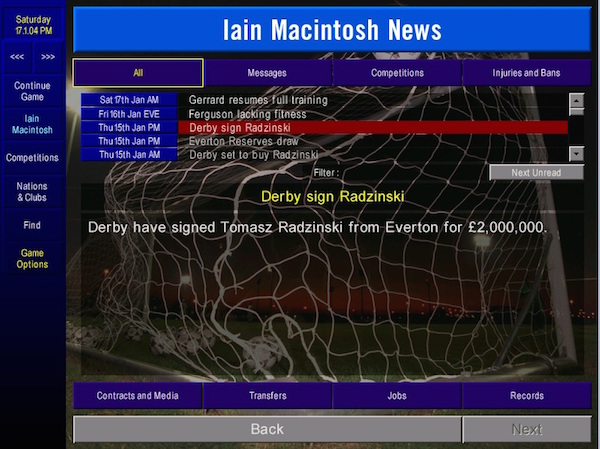 I shall not weep for Duncan Ferguson, but I won’t have the chance to for another 18 months. That’s how long I have to wait before he and his £27,000 weekly wage are a thing of the past. He’s been up for sale for a very long time, slightly overpriced at £0, a fee that has thus far dissuaded potential suitors from taking a chance on his disgraceful lack of professionalism. He turned up late for training again this week and it presented me with a problem. Do I fine him and risk upsetting the squad, as I have in the past? Do I ignore him and allow the cancer of complacency to spread? No, I just issue him with a warning. He complains, saying that he thinks I’m trying to force him out of the club. I think he might be getting the hint. To remove any doubt, I tell him to piss off for a fortnight. Roll on, July 2005. 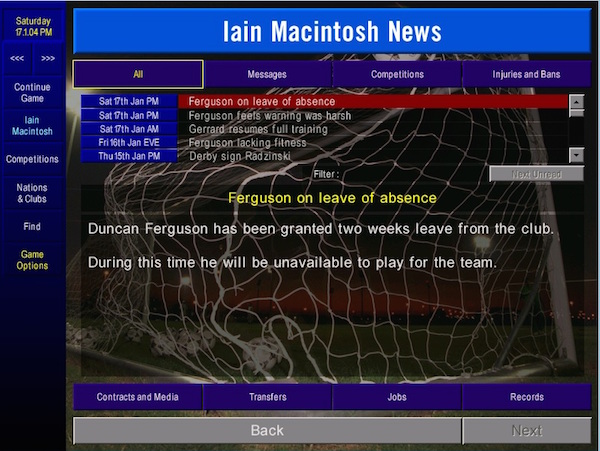 I’m looking forward to the trip to Newcastle. I think we can take them now. They’ve never been too hot at defending and I think we’ve got the firepower to turn them over. Rooney has played a lot of football this season, so I leave him out and push Ronaldo up front for the day. I have to keep in mind that the two of them are still only 18 and I don’t want to break them. 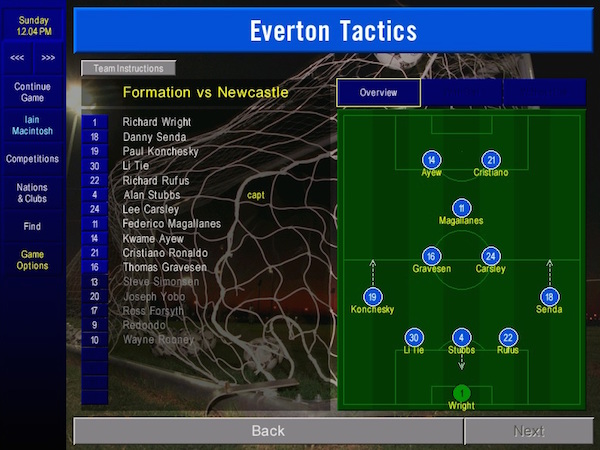 It all started so well. Newcastle were threatening through Alan Shearer, so I shifted the centre-backs to make sure that it was Richard Rufus who marked him. Newcastle were quickly neutralised. And then we took control. A goal by Ayew before the break. Another shortly afterwards. Then a third from Magallanes. Nils-Eric Johansson got one back for the Magpies, but five minutes later Rufus headed home a Rooney corner and it was 4-1. With 13 minutes left it was 4-1. And then Richard Wright was sent off and Newcastle had a penalty. Can’t sleep. Clown will eat me. 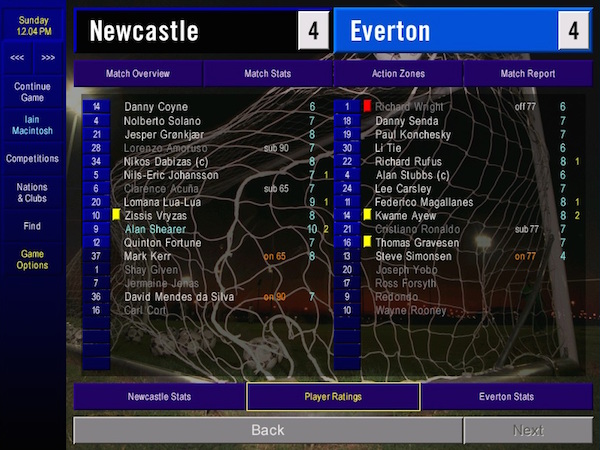 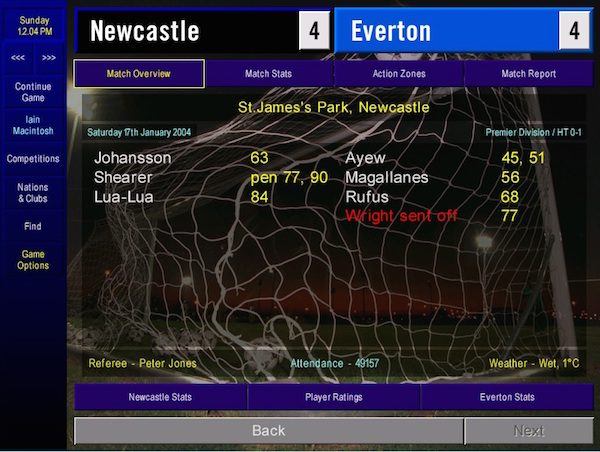 That really has knocked me for six. Steve Simonsen had three shots to face after his introduction and they all went past him. He’s out of contract at the end of the season and two attempts to retain his services had been rebuffed. Well, there won’t be a third. I was going to save the Radzinski money, but it seems only prudent to spend it on a new back-up goalkeeper, or perhaps two, just to make sure. We have to move swiftly. Though my appeal against Wright’s suspension was looked upon favourably, we were only able to reduce a three game ban to a two game ban. So that’s not much help. We need to move on. We need to forget what happened back there. It’s Bolton in the FA Cup and we know that we’ve got the measure of them now. Let’s just get this done. 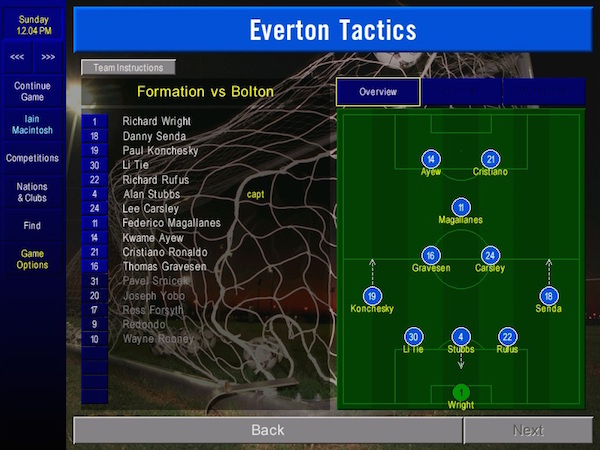 Bolton finally dropped Jeremy Bon, the useless 19 year old non-stopper who played so pitfully against us in the league. His replacement, John Mohan, is apparently brilliant. We play for an hour against ten men after Mads Jorgensen’s red card, but we can’t make the advantage count. I suspect that everyone is seriously messed up. Now we have to go to the Reebok Stadium for a replay. 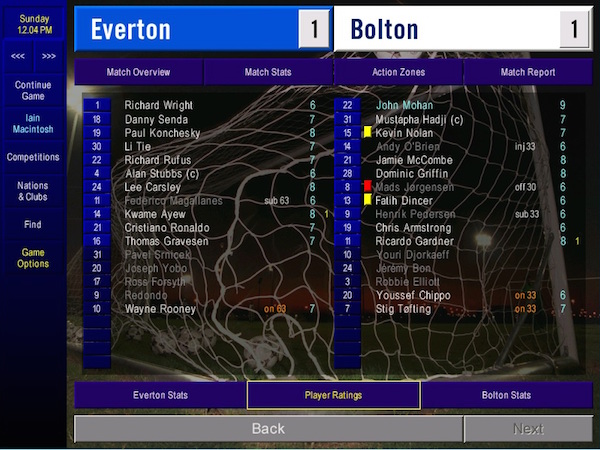 Fulham. Whenever you’ve got the yips, you want a game against Fulham. They’re decent and likeable, but they’re hardly the most formidable of opponents. Wayne Rooney returns to the team after his little rest and it’s the last game for Wright ahead of his suspension. This is the day. This is how we get back on track. 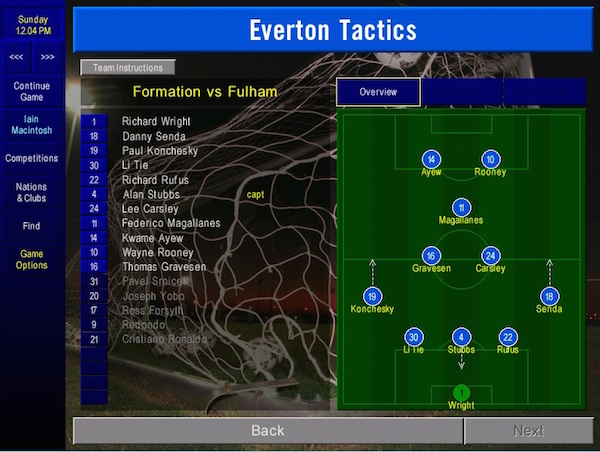 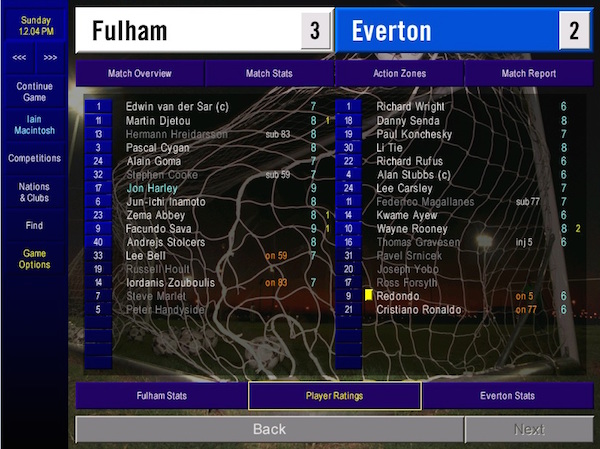 Still, it could be worse. Poor old Kevin Keegan has finally paid the price for two and a half years of tactical naivety. Farewell, Kevin. Come back soon. 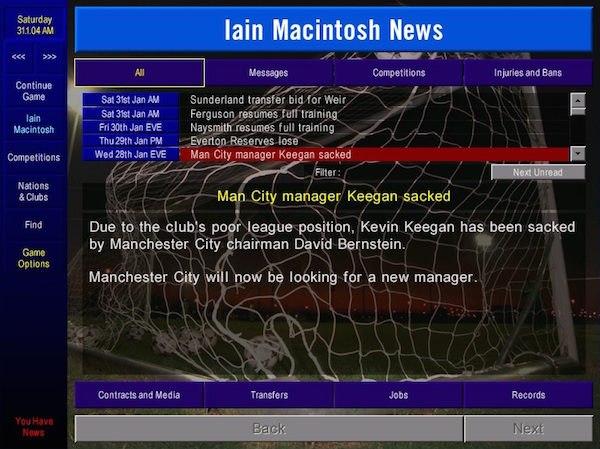 We have new arrivals in the team, the two most trustworthy goalkeepers who were immediately available. Welcome to Goodison Park, Alan Kelly and Pavel Srnicek. The coaches rate them equally, so I go with Srnicek because, well, you know why. It’s a baptism of fire, and no mistake. We face the league leaders Arsenal in what would have been a title face-off had it not been for our sudden case of shitting our pants. 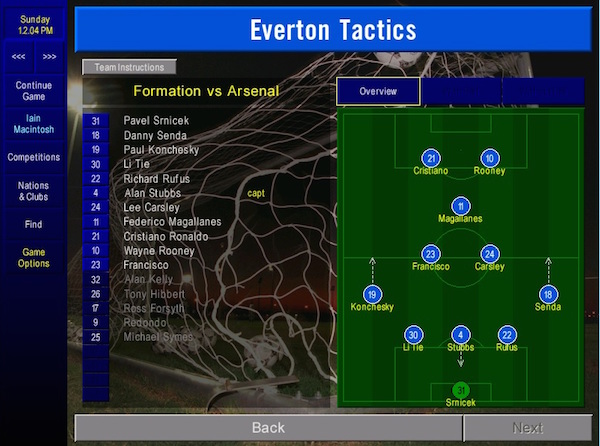 An early Wayne Rooney goal brought hope. A quick response from Theirry Henry took it away again. A Tim Cahill long ranger made sure it never came back. We didn’t play badly. Srnicek did absolutely fine. We’re just not as good as them. That’s four games without a win now. It’s all gone very badly wrong. 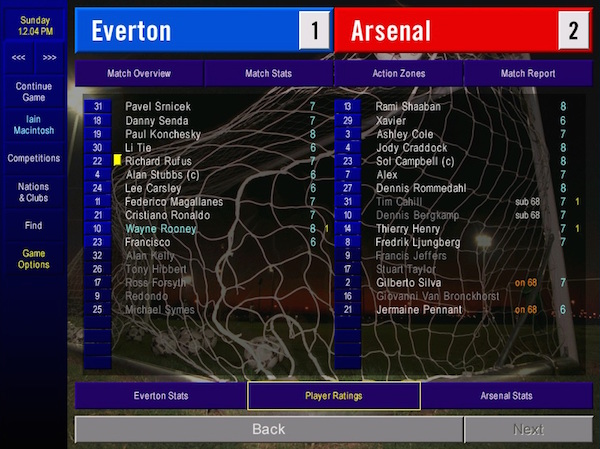 Of course, I say ‘badly wrong’, but we’re a team that was tipped for relegation in the summer and we’re in a Champions League place with 15 games left to play. Even if we fell away completely, we’re still going to surpass expectations. But we can’t do that. We can’t fall away. We have to keep pushing. After all, what will Cherno think of us? 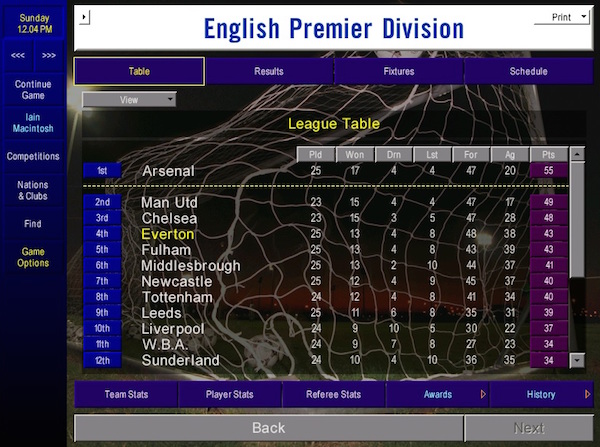 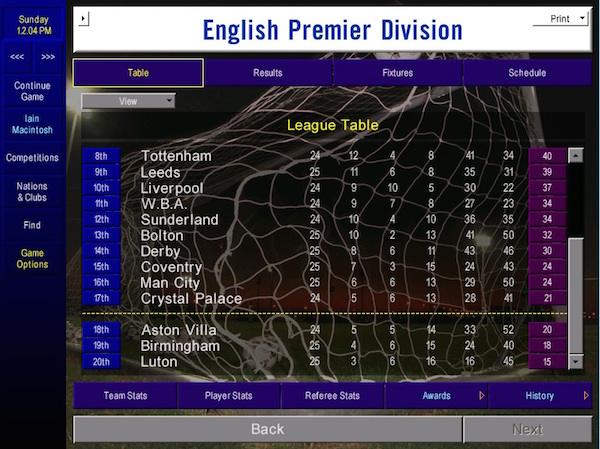