We have had a very good season. A very good season indeed. But it’s in serious danger of going completely titsy unless we get our shit together sharpish. Fixture congestion through January led to back-to-back defeats in the league for the first time this season and we cannot allow that sort of thing to continue for fear that it will catch on. We have just four games in February and I’d really quite like to win at least three of them. European football, of one kind or another, has to be the bare minimum expectation.

First up are Crystal Palace, who have played well this season using a standard 4-4-2, scoring freely through Ade Akinbiyi and Dougie Freedman. We’re still without Wayne Rooney and Cherno Samba, but Cristiano Ronaldo and Zlatan Ibrahimovic are forging a decent little partnership and so I feel reasonably confident in our ability to end this run. 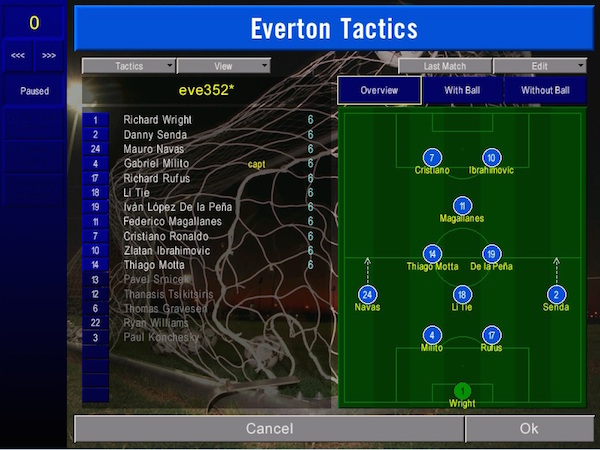 I should not have been so confident. I have no idea what goes wrong, but Palace absolutely dominate us from the first whistle. We’ve been fine in this formation all season, but suddenly we look desperate. We take wave after wave of punishment, but thankfully they can’t seem to put anything on target. At least until Freedman strikes midway through the first half. I try to shut them down by dragging Li Tie back, but it makes no difference. My only option is to match up with Palace and revert to 4-4-2. Thankfully, that works. Ronaldo’s cross is headed home by Federico Magallanes just before half time and I bring on Ryan Williams at the break to give us some pace down the flank. It’s a far more even game after that, but even though we have more of the action, we can’t grab the win. But we can’t complain. We should have been 3-0 down by the break. What a useful moment for Richard Wright to rediscover his form. 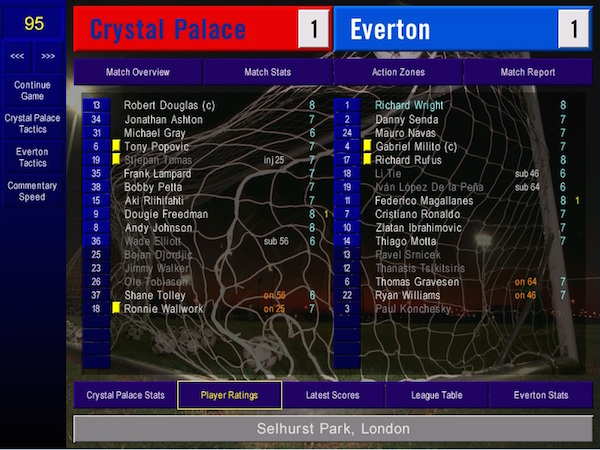 We seem to play Bastard Bolton every month. Having knocked them out of the cup last month, we seek to redress our league wobble against them now. The good news is that Wayne Rooney has finally returned from injury. The bad news is that the dents his pasty buttocks made in the cushions of the physio’s table have now been filled by Zlatan’s more sculpted derriere. Magallanes is suspended, but that’s okay. Cherno has returned too, so we’ll shuffle the pack. Ronaldo returns to the number ten role. This formation has worked well against Bolton in the past, so we’ll stick with it. 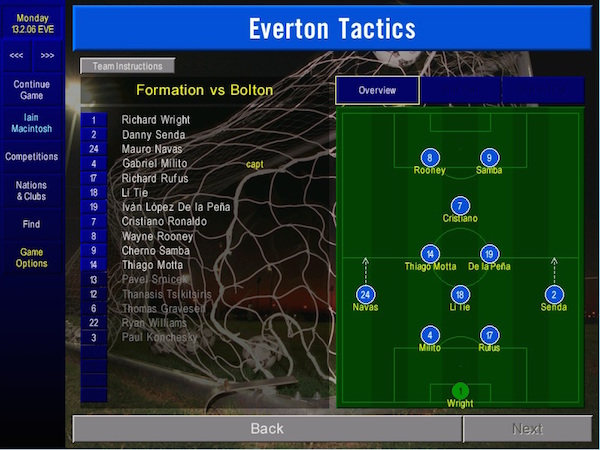 And it works again. Eventually. We do not allow Bolton a single chance. Not on target. Not off target. And yet it is not until the 71st minute that we score. This inability to crush teams is one of my many minor concerns. We have Rooney, Samba and Ibrahimovic and yet we never seem to find it easy to score. We always need countless chances. At least one of those men should be unstoppable, crashing through the 20 goal marker and heading towards 30.  Instead, we’ve got Ibrahimovic on 13, Rooney on eight and Samba on five. That’s not good enough. I don’t want to sell one of them, I shouldn’t have to sell one of them. But they need to sort themselves out. There are two young Greek strikers on my shortlist who are scoring goals for fun. And I’ll have some money this summer… 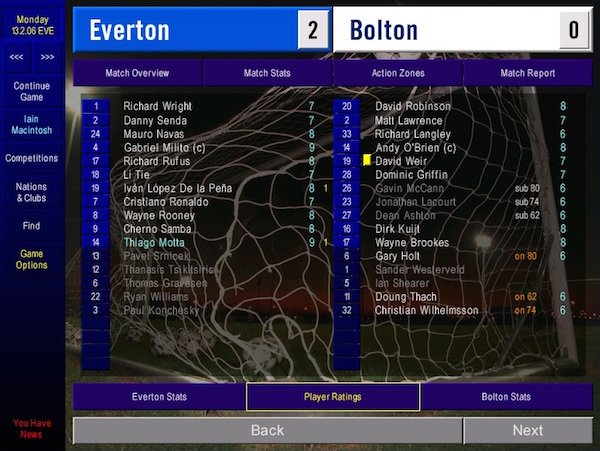 But it’s time for the most important game of the month. The FA Cup fifth round tie at home to Middlesbrough. Now managed by Dave Jones, ‘Boro are riding high in the second flight, but they really shouldn’t be capable of stopping us. I want this game won and I want it won early. I want a trophy. It’s been too long. Let’s get to work. 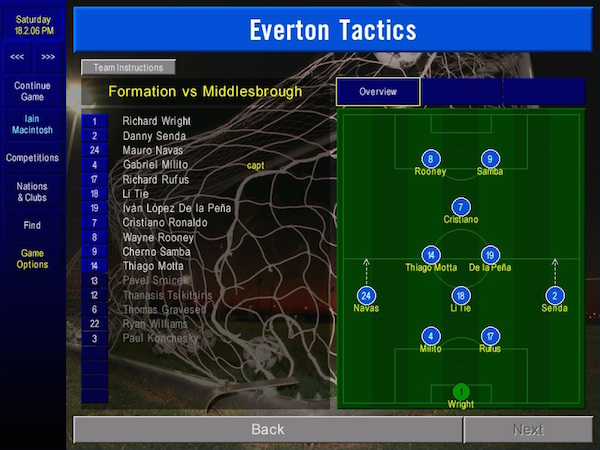 And here my minor concern becomes a major one. We toy with Middlesbrough like a cat toys with a mouse. We bombard them. We batter them. We do everything except score. And then the mouse pulls out a knife and cuts our throat. Richard Rufus is sent off for a second bookable offence shortly after the break and we fall apart. But we should have wrapped up the game by then. We should be able to pull men back and see out the victory. We cannot have ten shots on goal in 45 minutes and go down the tunnel without scoring. We cannot continue to make average goalkeepers look like Lev fucking Yashin. That’s us done for another poxy season now. Another cup that we should have won will sit on someone else’s mantelpiece. We should be winning stuff. We are good enough to be winning stuff. I’m going for a very long walk. Ask my secretary to tell anyone who calls me today to fuck off. 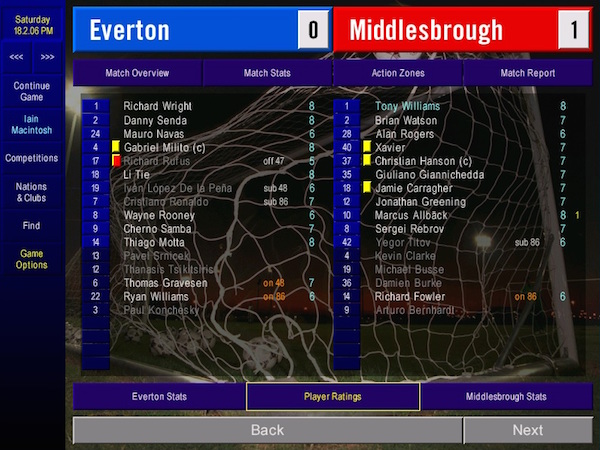 I’m not going to ask for a response. I’m demanding one. And I want the message out that there is no place here for passengers. There is no place here for heroes of yesteryear either. Lee Carsley, 32 this week, will leave the club at the end of the season. He’ll be joining Bastard Bolton on a free transfer. Thomas Gravesen is the subject of a bid from Sunderland too, the Black Cats seek to take advantage of his unprotected contract. The great Dane will be 30 next year and I’m prepared to let him leave. We’ll bring in a new midfielder this summer.

Arsenal are my primary concern for the moment. We travel to Highbury where Arsene Wenger is struggling a little. The partnership of Thierry Henry and Kevin Phillips has garnered 38 goals this season, but the rest of the team is failing to keep pace. They’re sixth and I want them to stay sixth. We are at whatever passes for full strength these days. 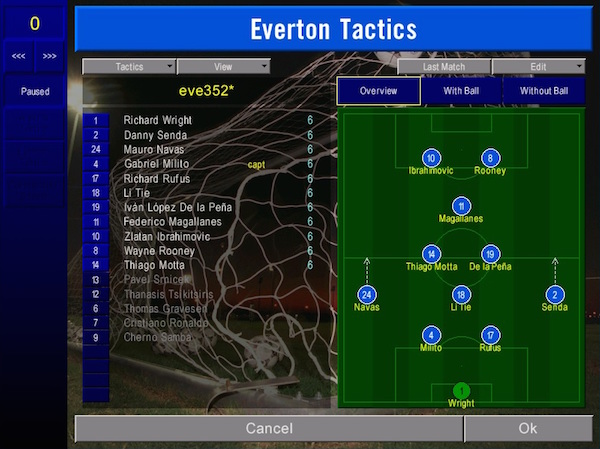 It’s a rollercoaster, but we escape with a point. A tight, tense first half ends with a Magallanes goal and a lead that we don’t completely deserve. I’m concerned, however, by the performance of Li Tie in the hole. He’s not winning any tackles and doesn’t appear to serve any purpose. He’s also been booked and, perhaps wounded by what happened in the cup last week, I take a precaution. I remove him and put Thomas Gravesen into what is now a three man midfield. With Arsenal wedded to their 4-4-2, perhaps we’ll dominate possession in this shape. Ten minutes into the second half, Arsenal lead 2-1. I remove Thiago Motta and throw Cherno Samba up front to try to force an equaliser. Samba is stretchered off. I replace him with Ronaldo, he has the same brief. We switch to attacking football. And then, with three minutes to go, we win our first penalty since I honestly do not know when. Zlatan does what Zlatan does. A draw away at Arsenal is a good result. It’s clearly a good result. But I can’t help thinking I shot myself in the foot there. 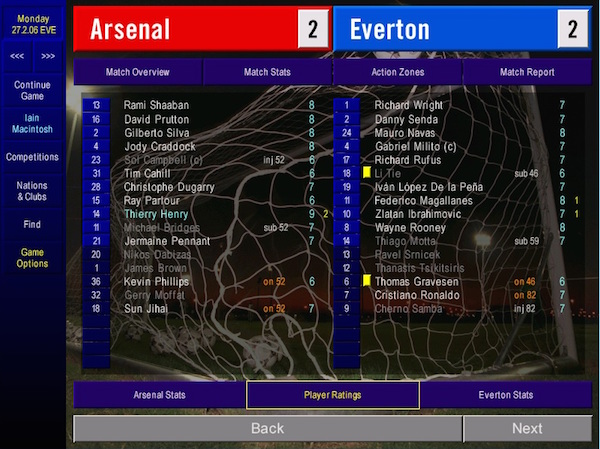 Five points from nine isn’t such a bad return. Not in comparison with some of the months we’ve endured over the past five years. But that FA Cup defeat really hurts. It really, really burns. We’re eight points deep inside the Champions League places, we’re 11 points ahead of Liverpool, we’re having a good season. But it doesn’t feel that way right now. It feels like yet another sturdy kick in my already heavily bruised testicles. 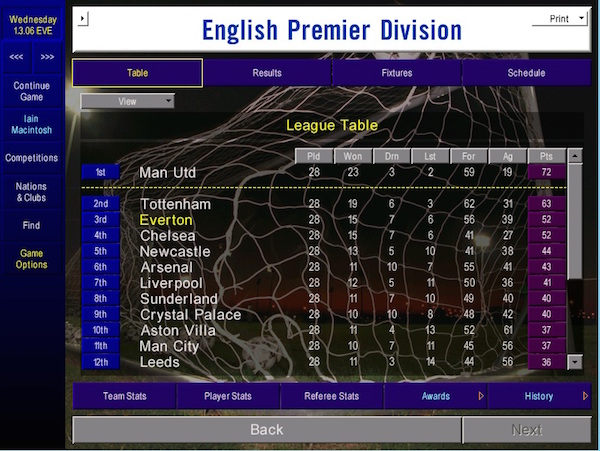 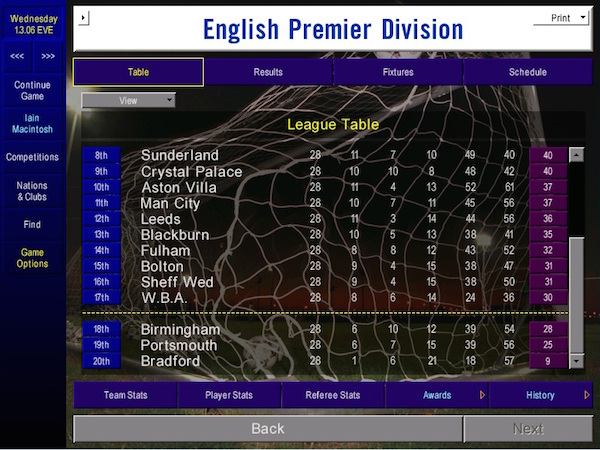