We’ve learned a lot about ourselves in recent weeks and I don’t consider any learning experience to be a waste of time. Yes, some of us are just naturally wonderful and success comes easy, but for the rest of us, life is one long procession of pain and heartache, punctuated by infrequent and fleeting moments of joy and ending abruptly in unavoidable death. You do what you can to make the best of a bad situation, but ultimately we are all marked to die and so there’s little point in getting too upset about things like TV schedules, Katie Hopkins or losing at home to Sunderland.

I’ve been working hard on my motivational speeches this week and I really think it’s going to make a difference. And I’m right; we have learned a lot. We’ve learned not to deviate from the plan if the plan is working. We were doing fine with a back three. Absolutely fine. There was no need to rip it all up and start again just because we had too many strikers. So in February, we’re going to return to the tactics that worked for us. A back three when we can conceivably win the game. A defensive 4-5-1 when it would be suicidal to do anything else. We have 25 points on the board with 14 games to go, so we should be able to secure safety quickly. And we owe respectability to our fans, many of whom are starting to lose their shit with all of this.

@thesetpieces reading CM The Return is like supporting a real team now. This isn’t a compliment. Macintosh out.

@thesetpieces You're in your fourth season; how on earth is Tony Hibbert still getting a game?

@thesetpieces I'm at the point where I'm checking for these daily. How fucking sad am I?

We’re away at Aston Villa, one of the few clubs doing worse than us, and so I think victory is a realistic expectation. We’ll man mark appropriately and Alan Stubbs retains his place for his crucial captaincy skills. I’ve got a good feeling about this. 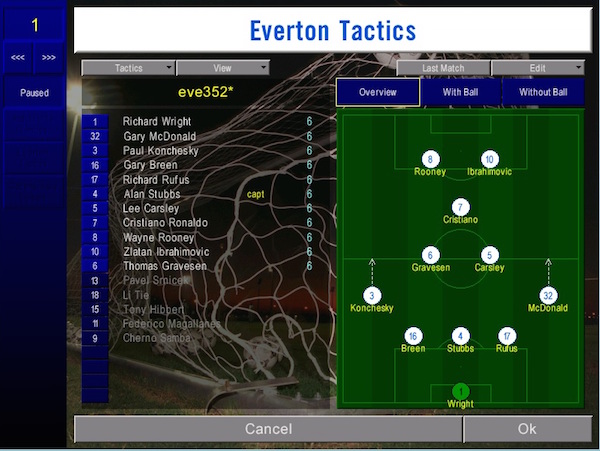 Aston Villa’s first attack culminates in a delightful lob from Mario Melchiot that beats Richard Wright all ends up. It’s the only goal of the game. Almost every attack breaks down when it enters Alpay’s airspace. He wins three key headers and two key tackles. On the odd occasion when we get a sight of goal, we miss the goal. It’s not a bad performance, there are certainly positives, but not enough. Richard Rufus is particularly disappointing. In an ordinary season, you can take a result like that. But this is not an ordinary season. We’ve lost too many games already. 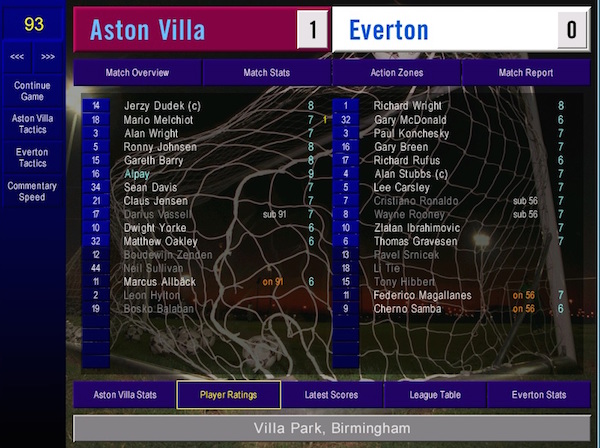 Away at Old Trafford, there’s no way that we can get away with an attacking back three. We need to batten down the hatches and hope to snatch something on the break. We need everyone fit and firing on all cylinders. In our first season, the year that we made the top four, we used to win games like this all the time. Then we got delusions of grandeur and it all fell away. I would like a retro performance this time. Let’s remember what we’re all about here. Cherno Samba is the quickest striker, so he plays up front on his own, just in case we break. George Fraser and Kiki Musampa take up position on the flanks, man-marking the full backs and creating an impenetrable line of blue shirts. We’re ready for this. 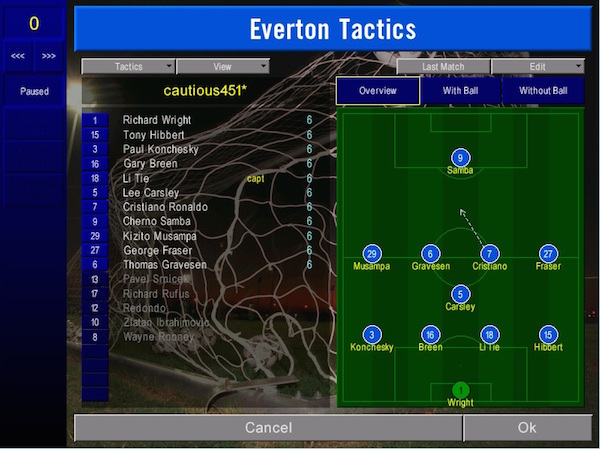 We’re three goals down after 22 minutes and I have to rip it all up and start again. Someone asked me the other day why I hadn’t tried a narrow 4-3-3. I’m 0-3 down at Old Trafford with 68 minutes left to play. I think if there’s ever a time to try something new and know that it can’t possibly be any worse, it’s now. We lose 4-0. In 90 minutes, we do not make a single chance, on or off target. That was disgraceful. 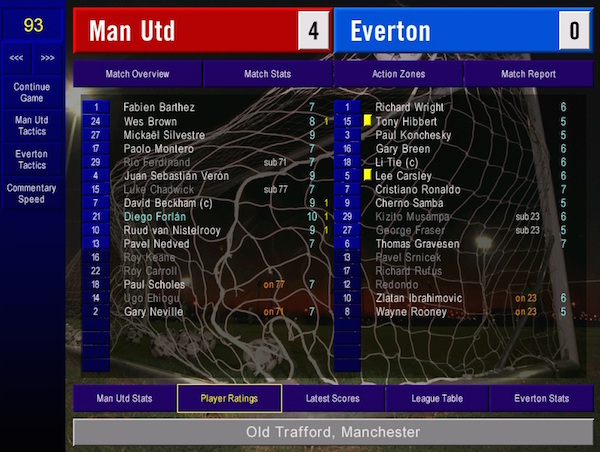 The press, for reasons known only to themselves, turn their firepower on Cherno Samba, but I’m not having any of that. He’s 18, he’s only just arrived and he’s actually playing just fine. I defend him and apparently he appreciates the support. That’s nice. Siege mentality. Maybe we can tap into that. We need to do something. We’re getting closer and closer to the relegation zone. 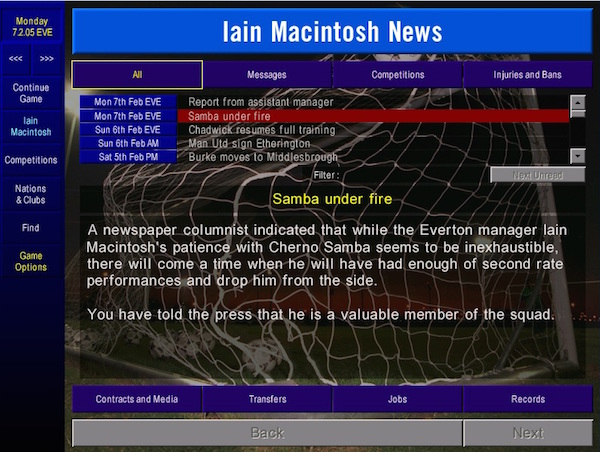 This is it. It’s Derby County at home. They are bottom of the table. We have to win this game. If we do not win this game, I will have to seriously consider my future. This is what it all comes down to. We’re going full throttle, attacking the game, seizing the day. Fuck me, we need this. 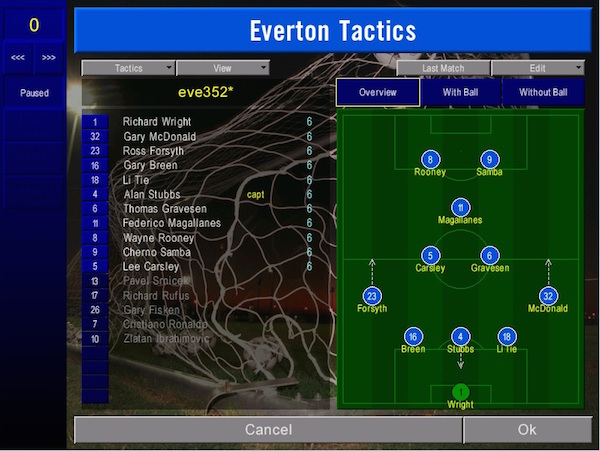 It’s the win we needed, but we made hard work of it. We dominate from start to finish, but without actually putting the ball in the net. This has been a habit of ours all season. I still maintain that we’re not actually *that* bad, we’ve just had too many days when our finishing has been off, or our defending has been off or Richard Wright has been terrible. We’re about ten points better than we seem, I’m sure of it. But it’s hard to make that argument when you keep losing. This win might just change the mood. Now let’s build on it. 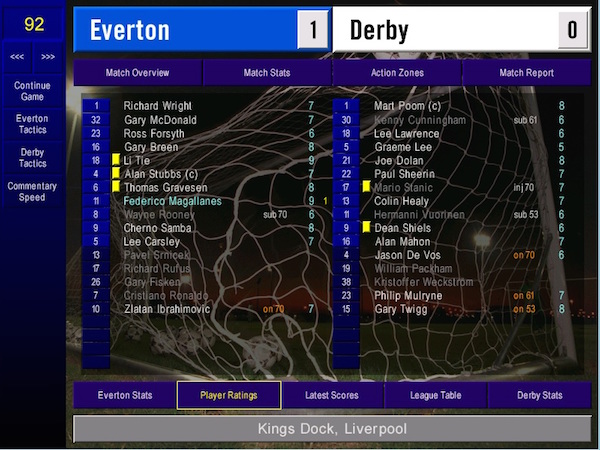 Leeds United are having a miserable season as well, though not quite as miserable as us. They’re stuck in tenth and it seems that time may be running out for Terry Venables. It’s funny, but in all three of our games at Elland Road, we’ve lost 1-0. Well, it’s not funny, per se. But it’s interesting. Maybe we’re too cautious when we go there. I plan to keep a similar team for this one. Stubbsy is injured, Gravesen is suspended and Wayne Rooney has been wretched for so long that his morale has plummeted. Let’s see if we can change history. 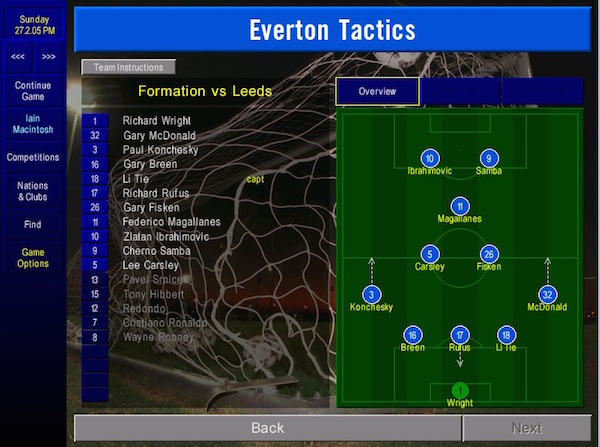 History changed. We lost 2-0. Flat, flat, flat. We tried the back three and went 1-0 down after being dominated for half an hour. A change had to be made and so Breen was hooked and we tried the old diamond formation. A minute later, we were 2-0 down. Morale is rock bottom, defeats are piling up, we can’t score goals and we’re only six point above the drop zone. I would have to say, on balance, that this is not going very well at all. 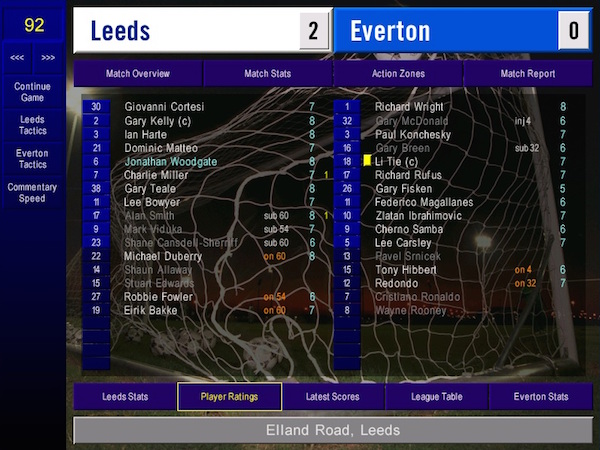 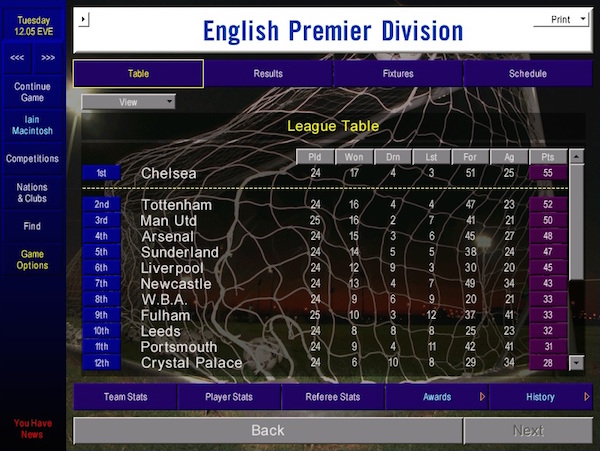 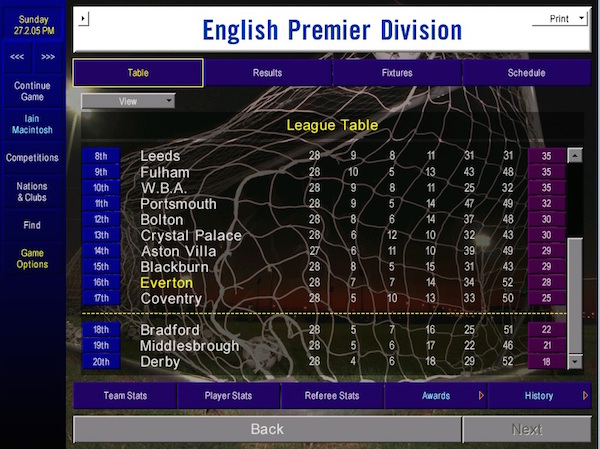