I stare down at my bare feet in the warm grass. My pyjama trousers ripple in a soft breeze. I am sure of only one thing: I am no longer in Kirkby. I was in Kirkby. I was in my kitchen. I was pacing my kitchen in the dead of night with a glass of scotch, trying to figure out where it all went wrong. And then I sat down for a moment. And now I’m here. Halfway up a gentle hill, barefoot in the warm grass and under a sky of the clearest blue.

These last few weeks have been a testing time, more so than any period in my three and a half years at Goodison Park. In a way, it was easier when we were broke. There were no expectations. But now we have a 55,000 capacity stadium. We have revenue streams. We have a cast of bright young European talent. We’ve got Tony Hibbert. And we’re not coping very well. Just four wins in 15 games. It’s not good enough. And that’s why I pace the kitchen in the dead of night. That’s why I was pacing the kitchen in the dead of night.

I walk up this gentle hill. Around me there is nothing. Nothing but other gentle hills. The sun is high in the sky and there is something…it feels like a memory. Or at least the echo of a memory. Of that first day of the school holidays when it felt as if an eternity of sunshine and comics and test matches was laid out in front of you.

As I start to crest the hill, someone shouts a greeting. At the top, underneath a sagging tree, there is a long wooden picnic bench. Two men sit on the same side, facing me and smiling. One has bright red hair, the other is as bald as a cue ball. In the centre of the table are three tall glasses and a large bottle of champagne in a glistening ice bucket. The bald man grins and beckons me over.

“So what are you two? Spirit guides?” I say.

“None of that cheek, lad. We’re just here to help. You’re making a right mess of this.”

Alan reaches over and pats the back of my hand.

“You’re overthinking it, son,” he says. “You don’t have to overthink football. Well, not unless it’s the last day of the season and you need to calculate an as-it-stands league tab-”

“So…what do we do now?” I ask and I reach for one of the champagne glasses. Howard’s eyes flash and he slaps me across the back of the hand.

“That’s not for you, son. That’s for our mate. Now listen; you’re faffing. You keep messing around with your tactics and you’re losing your players. You don’t need all that. Which two teams do you admire most?”

“Manchester United and Arsenal,” I say, rubbing the back of my hand.

“And what formation do they play?” asks Alan.

“There you go then,” says Howard, grinning. “Just get them to play football. Tell them to pass the ball, put it through the middle. You’ve got a big striker and a little striker, haven’t you? Use them. You’re making this harder than it should be.”

“But you don’t understand,” I start to say. They both start to howl with laughter. Howard slaps Alan on the back.

Alan leans across the table and points his finger at the centre of my forehead.

“Go back and sort it out,” he says. And then he winks. And then he pokes me. And then I’m back in Kirkby, in my armchair, clutching an empty glass. The morning sun is shining in through the kitchen window and my bare feet are muddy.

Of course, it’s harder than it sounds to quickly switch to a 4-4-2 after years of playing without wingers. Our primary problem in this regard is that we have no wingers. Also, given our heavy spending, we have very little money. And so it is that I find myself haggling Port Vale down to £220,000 for Claus Jorgensen and promoting George Fraser, an untested regen located by my scouts this summer, to the first team. They’re not very good, but it’s just for the short-term. This lack of appropriate players is also why I’m trying to retro-fit Federico Magallanes and Cristiano Ronaldo as central midfielders. Oh, and the first game of this new dawn is Arsenal away. So, in short, I’m not expecting much. 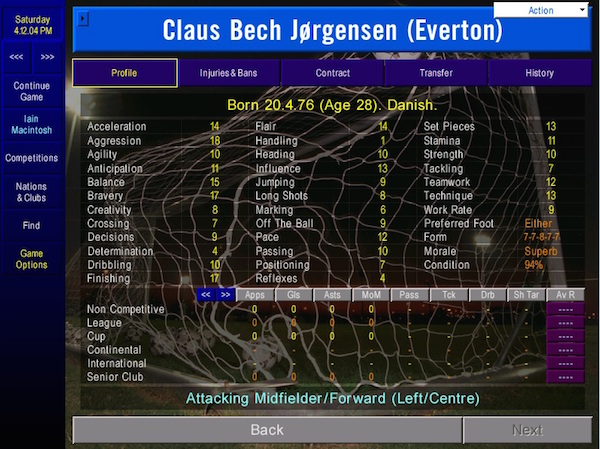 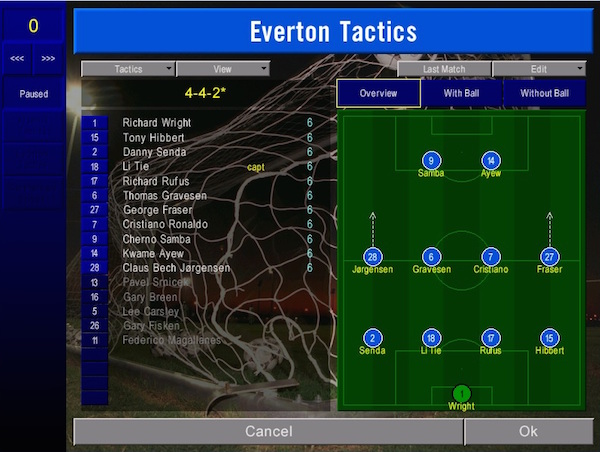 Well, that was interesting. For the first time in ages, we match Arsenal. In fact, we’re better than Arsenal in all but two rather critical departments. Richard Wright picks today to have a stinker and Li Tie fails to win a single tackle all afternoon. But there are positives. Ronaldo is excellent in the middle. Jorgensen is fine until he picks up a knock. Fraser scores on his debut. Cherno Samba scores again. I mean, a point would have been nice, but right now, I’ll settle for a decent performance. 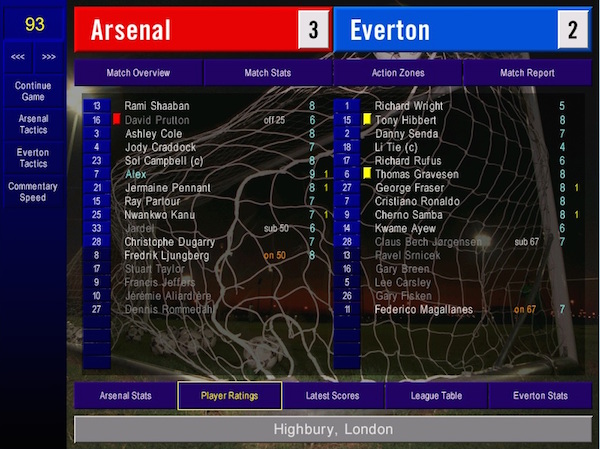 Another winger arrives on the Sunday, Kizito Musampa of Malaga fame is here for £375,000. Never let it be said that we cannot cut our cloth accordingly. He’s got a bit of zip and he’s handy with a set piece. He’s scared of his own shadow and liable to fold if someone looks at him too harshly, but again…he’ll do for now. 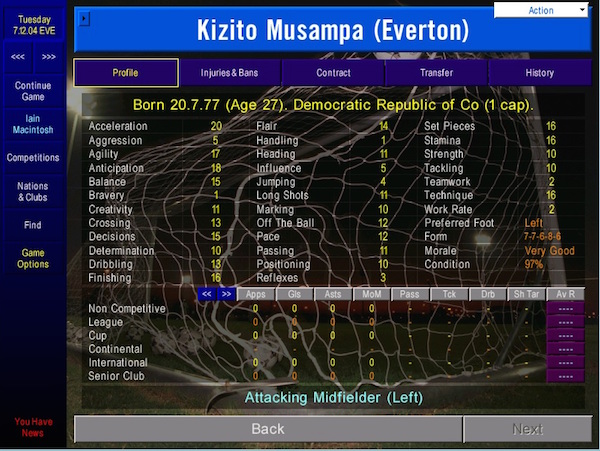 We’ve now been so long without a win that Paul Stretford is getting twitchy. I do feel a little sympathy for his client’s frustrations, but I don’t think this is the way out. 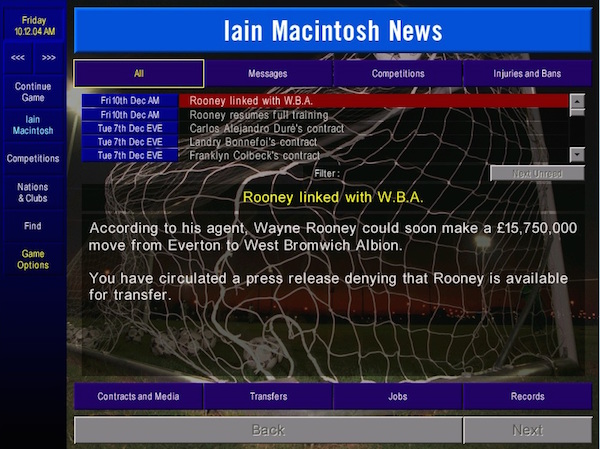 There are times in life when you feel that you must stand up and be counted. £15,000,000 spent, six games without a win, a new formation inspired by a dream sequence and we’ve got Bradford at home. Today would be a very good day to win a game of football. 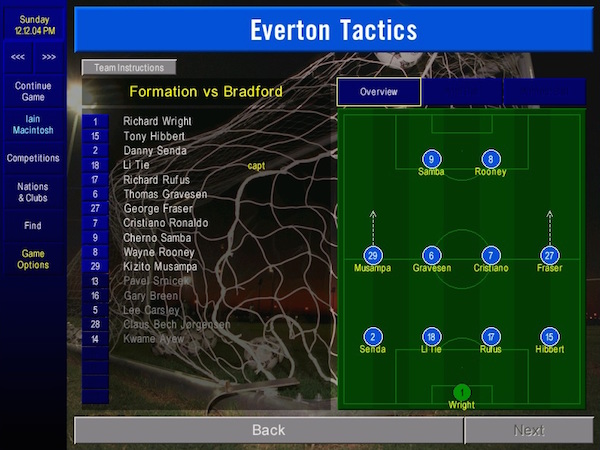 Sigh. No, still no win. But again, we’re much better. We make more chances, we coax a man of the match performance out of their goalkeeper and, once again, we’re compromised by a wobbly defence. This is very frustrating. There are green shoots. You just have to look really, really hard for them. I really hope the board share my optimism. 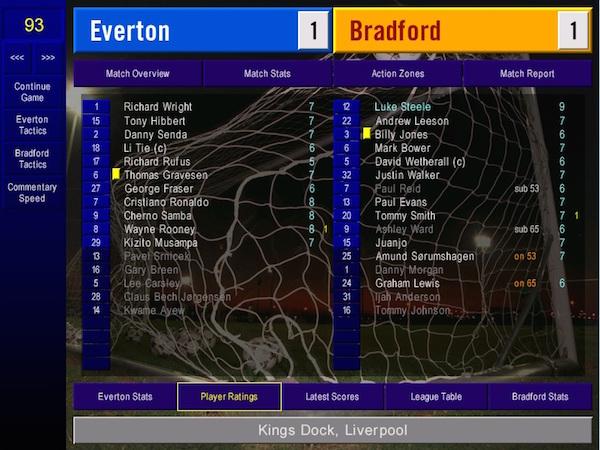 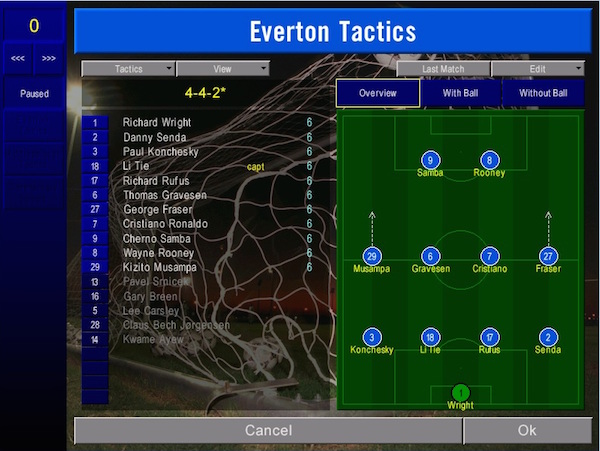 Huzzah! We have three points at last! They are not easy points to secure, they were not secured with any comfort, but they are ours! A goal for Musampa and then a bright start curtailed by Noel Whelan and Arturo Bernhardt. Disaster loomed, but then a mixed blessing. An injury to Cherno Samba necessitated the introduction of Kwame Ayew and his two goals turn the tide. Pour the drinks! Ready the troubadours! Ignore the poor performances from a number of key players. Tonight, we party like it’s 1970! 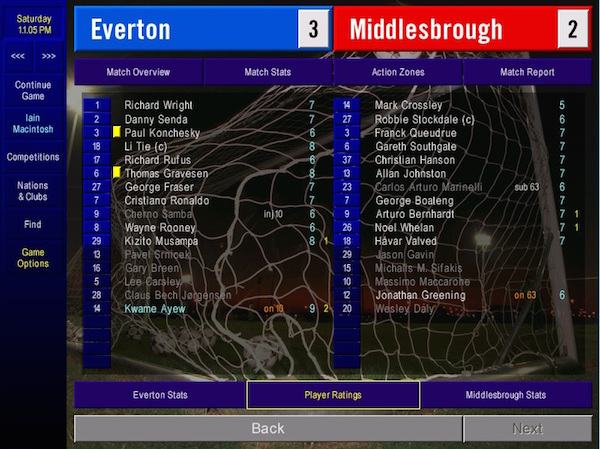 West Bromwich Albion, coveters of Rooney, are in town. But this run of December fixtures is taking its toll. Ronaldo can’t play, so Magallanes will have a turn in the middle. Lee Carsley will bolster the right flank as, with the best will in the world, Fraser isn’t ready for the Premier League. Ayew, it is fair to say, has done enough to retain his place. And besides, Zlatan is injured, so he’ll have to play. Time to build on this good start and then jet out of the bottom half of the table. 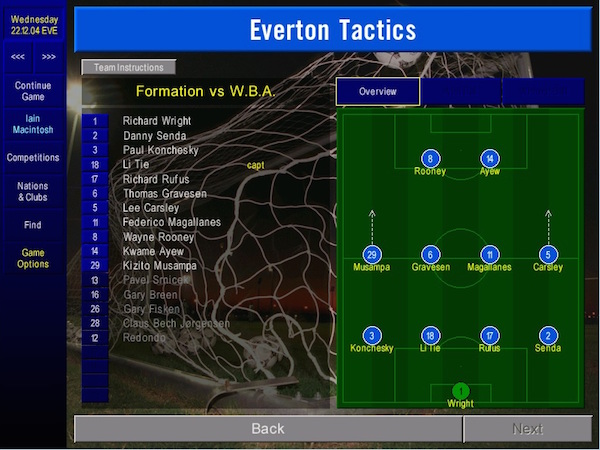 Well, that’s profoundly disappointing. It turns out that even Fraser is better on the right than Carsley. And we still can’t quite get the whole team to play well at once. An early goal from Magallanes, his first of the season, suggested good fortune. Alas, more points dropped. They only had one chance. But let’s not get downcast. We’re unbeaten in three and that’s quite an improvement. 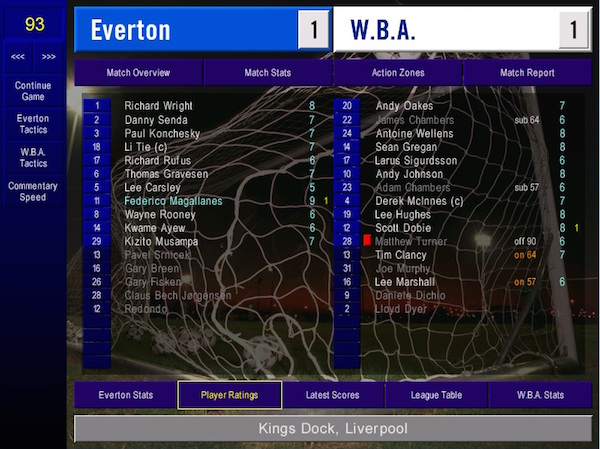 Welcome, Carlos Edwards. I acknowledge that you are not very good at football, but you’re quick and we’re desperate. We need someone to stand out on the right and if it’s someone who can run very quickly, all the better. I’ve learned a very important lesson this year. This is what happens when you spunk all your money on a striker you didn’t really need. 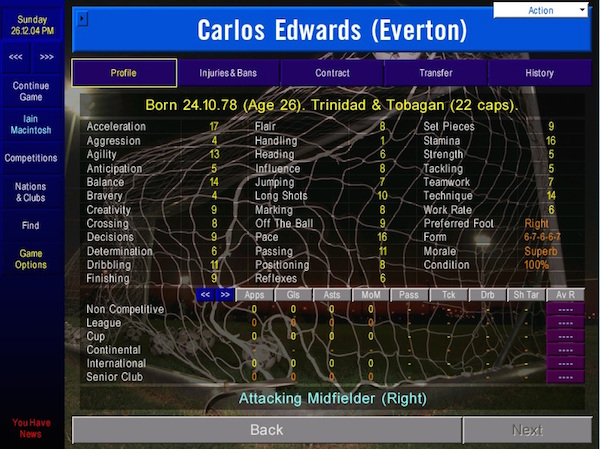 A few changes then for the trip to Crystal Palace. Richard Rufus pays the iron price for his performances and is replaced by Gary Breen. Edwards makes his debut. Rooney’s performances have slumped, but he has to play because Samba and Zlatan are still injured. I’m a bit worried about this one. It feels like too much putty and not enough window. 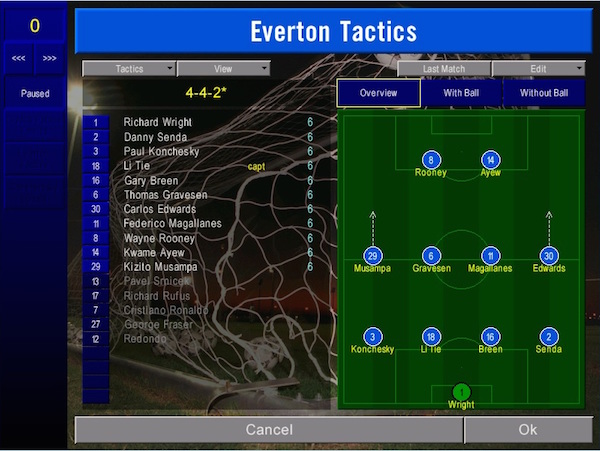 Yes, I was right to be worried. That was absolute arse. A terrible performance in every department. Except for Edwards, weirdly. That said, the incompetence was so widespread, that it could just be fatigue rather than a sign of something more sinister. The Christmas rush isn’t the best time for assessment. Perhaps it’s okay just to say, “You were crap, lads. Don’t be crap again.” That’s the kind of management I’d respond to. 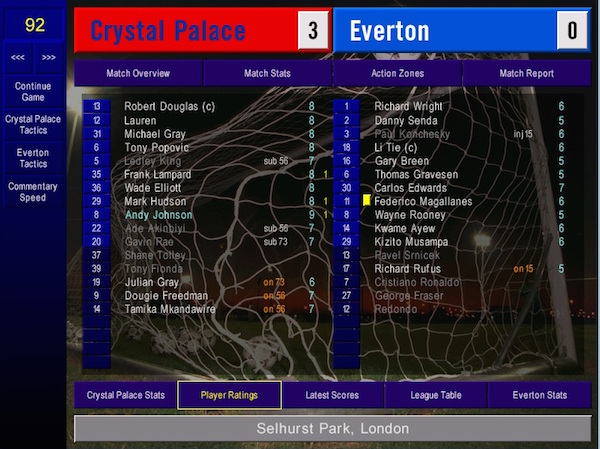 There’s no let up in the fixtures at all. We’re not even nearly ready for a trip to Bolton. Most of the players are at 85% fitness, those that aren’t at 85% fitness are injured. And 4-4-2 has never really worked well against Bolton’s 3-5-2 attacking formation. I could change it and go back to the old ways, but I feel I need to test this 4-4-2 theory thoroughly. 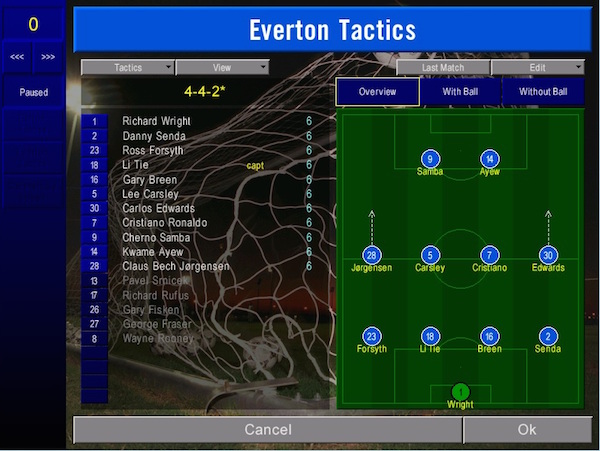 Oh wow. That was actually a lot worse than I expected. Two thrashings in three days. We’re in a lot of trouble, aren’t we? Maybe I’ve learned another lesson here. Never let a dream sequence influence your thinking. Happy fucking New Year. 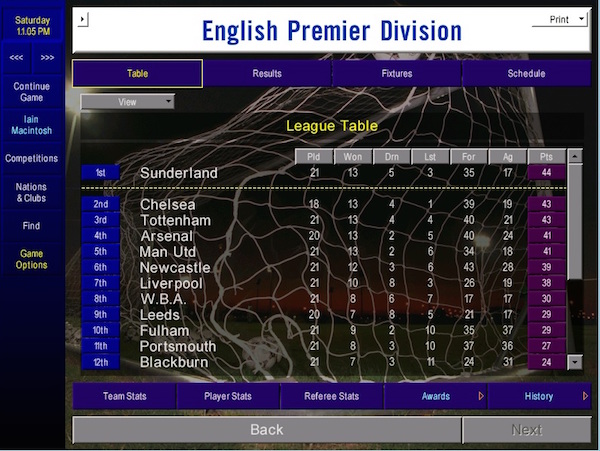 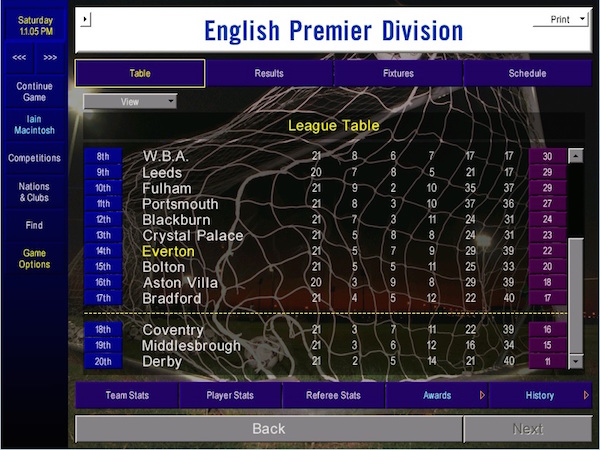