It wasn’t so long ago that we used to dread the start of every month. What would go wrong next? Had we suffered an injury to a key player? Had another bit of the stadium fallen off? Was there a terrifying man standing outside the window with a pair of industrial bolt cutters? Not now though. Not under the new regime. Sure, there are still some pressing concerns, like the way the money is pouring out of the bank account and the fact that we can still only get about 23 people through the turnstiles, but that will all get fixed soon. No, the start of every month heralds new joys now. For example, look what Liverpool went and did. They lost a cup final on penalties. 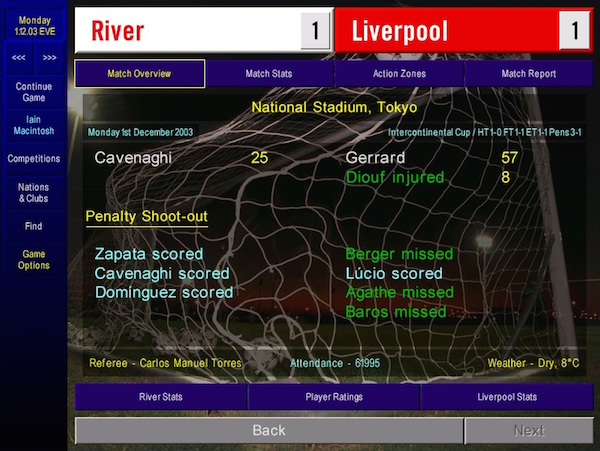 And look what we’ve gone and done. We’ve clipped the wings of our favourite raven and now he’ll never, ever fly away. I’m feeling Christmassy ALL OVER AGAIN. 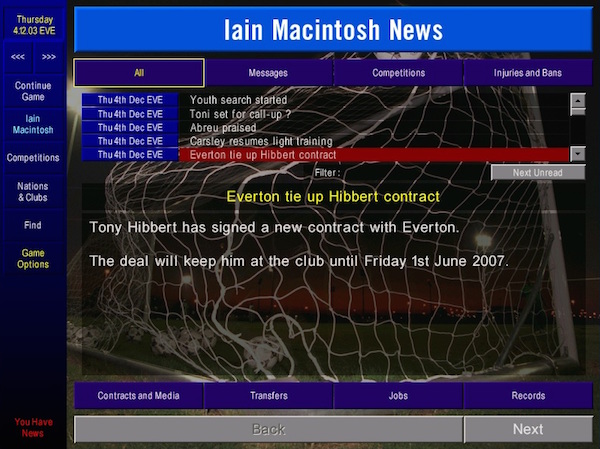 But we must push on, for there is football to be played. West Bromwich Albion are in town. They’re a very respectable side, the Baggies. They always win slightly more than they lose, they score slightly more than they concede and they never spend money. They’ve finished 11th and 10th and they’re currently 9th, so Gary Megson is certainly delivering on his promise of year-on-year improvement, albeit at the slowest possible rate. I’ve noticed that Cristiano Ronaldo has complained of tiredness since he started playing regularly and I’m mindful of the fact that he and and Wayne Rooney are both 18, so I’m going to start resting them periodically. Starting now. 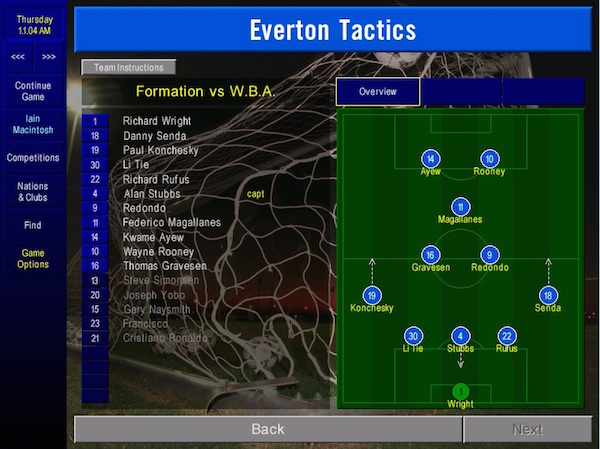 A tense afternoon, but a successful one. Just. We are impregnable at the back and Li Tie marks Lee Hughes right out of the game. Megson’s mob barely make a chance all afternoon. But neither do we. For some reason, we can’t get Rooney and Kwame Ayew into the game. We’re reduced to long shots from Federico Magallanes. I pull off Redondo, who’s tiring badly and throw Francisco into the fray. I chuck Ronaldo on for Rooney. I switch to ‘attacking’, but it makes no difference. And then in the 87th minute, Magallanes twats another one in from range, West Brom’s substitute stopper Joe Murphy can only parry it and the Uruguayan is there to tuck in the rebound. Why did we never get luck like that when we were struggling? 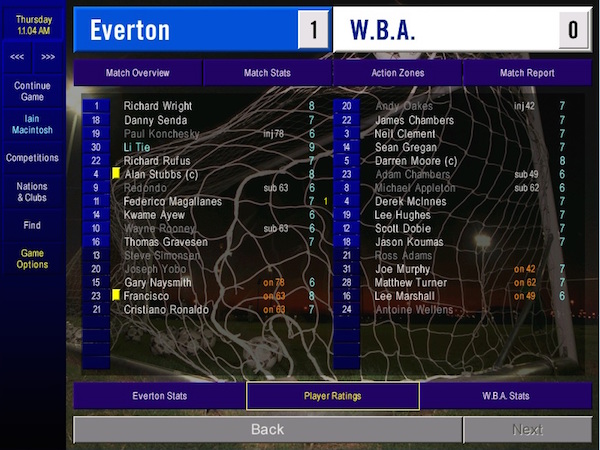 The end of the year is approaching and we have a number of players coming up to the end of their contract. David Weir, Steve Simonsen and Gary Naysmith have all struggled to secure first team football and none of them are interested in new deals. In fact, Naysmith goes so far as to discuss terms and sign a deal to join with newly promoted Luton Town next summer. It’s not a big loss, he’s never found his feet here, but I’m a little concerned that we’re playing Luton next and with both my young left backs are injured, I have to pick him. Will there be a conflict of interest here? Surely not. He’s a professional at the end of the day and I’m sure he’ll give everything he’s got for the cause until he leaves in the summer. 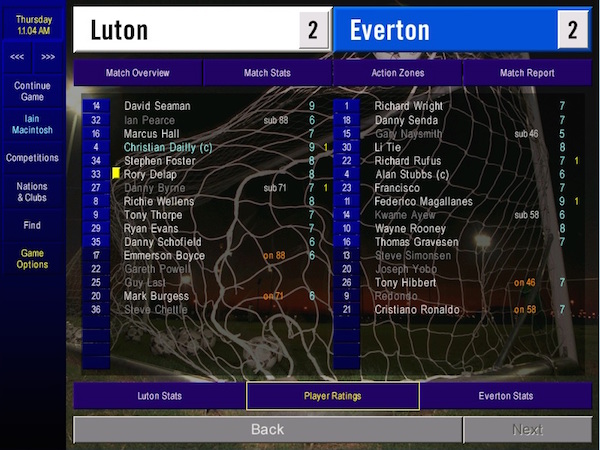 Gary Naysmith is a fucking thief. He may as well have crept into my bedroom and stolen my fucking wallet. He’s a shameless, morally bankrupt, mouse-hearted shit and Luton Town are welcome to him. He didn’t make a single tackle or win a single header and it’s no surprise that both of Luton’s goals came from his flank. Luton are terrible, they’ve barely won a game all season, but they very nearly win this one in much the same way that the Persians won the battle of Thermopylae; because some bitter little hunchback showed them the way to get round the back of us. I’m incandescent with fury. I can taste blood. If we miss out on Europe by two points, I will strap that despicable fuck nugget to a rocket and fire him into the fucking sun. We’re still 4th though, so that’s a bonus.

Next up are Bastard Bolton Wanderers who always beat me. But something’s changed. For some reason Sam Allardyce has promoted a 19 year old French goalkeeper into the first team and has kept faith with him even though he’s shipping two goals a game. Jeremy Bon is really not very bon, but Big Sam obviously sees something in him. Needless to say, Naysmith has not retained his place in the team. I’d rather put Joseph Yobo at left-back then let that happen again. 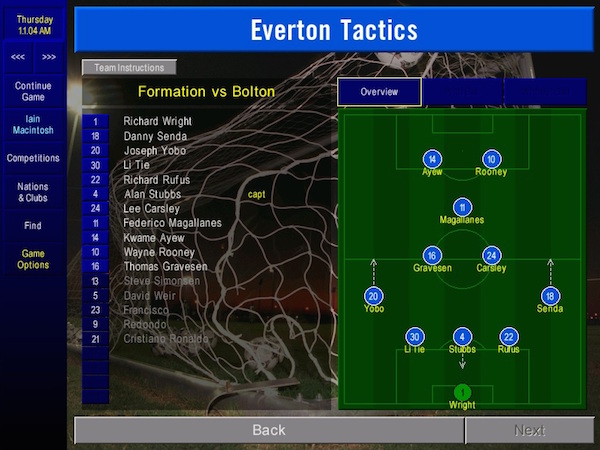 We’ve done them at last! Two first half goals from defenders Richard Rufus and Danny Senda give us an early lead and we’re put under barely any pressure at all, save for Chris Armstrong’s late consolation goal. Yobo is excellent in his new role and we’re even able to rest a few tired legs for forthcoming fixtures. It’s all very comfortable, a feeling I have rarely experienced in this career. 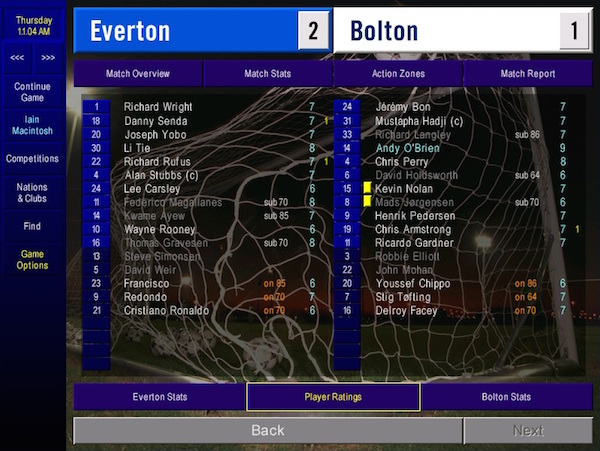 This is a very pleasant run of fixtures and I’m particularly enjoying the absence of any teams that are, what I might call ‘good at football.’ A trip to Coventry awaits in the first fixture after Christmas Day and that’s not a destination that fills us with foreboding. Having restored themselves to the top flight, they’re in danger of dropping straight back out again. Naturally, we’ll be happy to help them along the way. 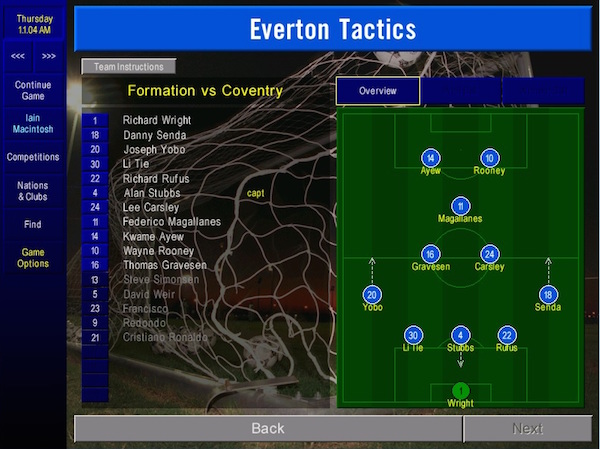 A curiously difficult game right up until the moment when it wasn’t difficult. Coventry start well and threaten to score three times before Rooney stabs home the opener from close range. But instead of wilting as I’d hoped, they have the temerity to come back at us and then to equalise. We’re having shots, but putting nothing on target. And then, midway through the second half as my finger hovers above the tactical change button, we fire into life. Two goals in three minutes put the game beyond doubt. I didn’t like that. Coventry scared me. We can’t let that happen again. 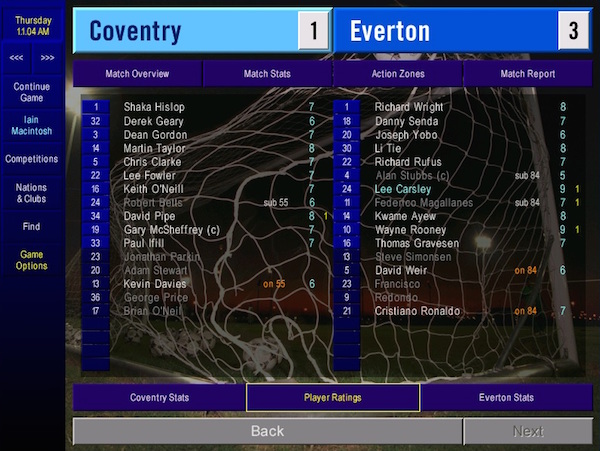 We close the month at home to Manchester City and, given that we always beat them, confidence is high, Paul Konchesky returns to the team, so Yobo can stand down. I’m tempted to rest Rooney, but options for a replacement are limited. Ronaldo seems happier in the hole and with Magallanes tiring, I want him to play there during the second half. We’ll go with what we’ve got, but I could do with shifting a few players and getting some fresh faces in. 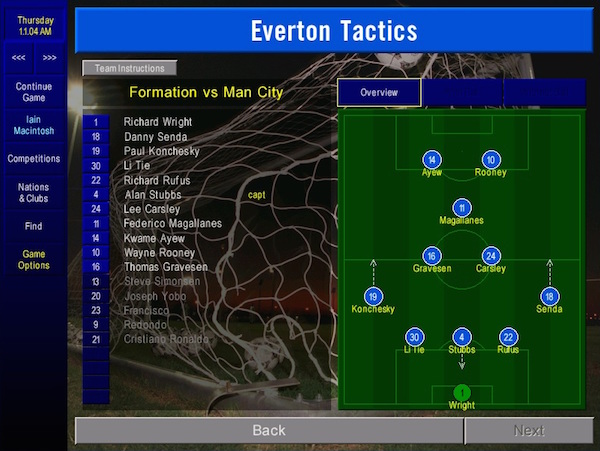 Well…that’s just rude. We batter City from start to finish with the exception of a short, but crucial period late in the game when Paul Ritchie jumps up and heads home the winner. Magallanes fades quickly, as expected, but Ronaldo’s introduction changes nothing. We’re off our game in the final third and it costs us dearly. 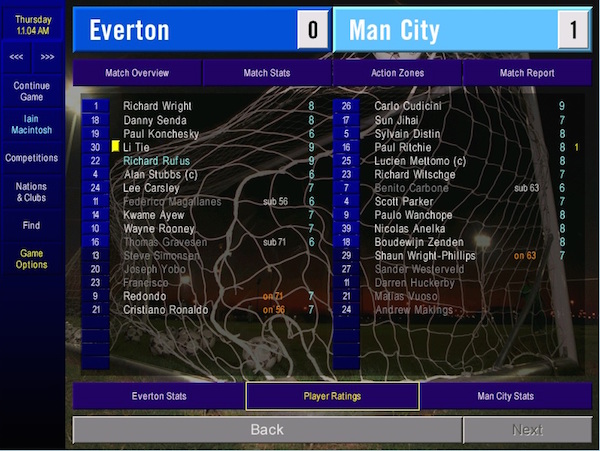 On the first day of the New Year, we sit in the Champions League places with our target of ‘avoiding relegation’ attained already. I should be happy, but I know that we could be higher. A win against City, which is what we deserved, would have had us above Chelsea and Manchester United. This is an odd season. The teams that don’t usually lose games are losing them in piles. But we shouldn’t be greedy. We’ve made great progress with the new formation, we’re getting the best out of our players and the real reward isn’t points or prizes, it’s the friendships that you make along the way. 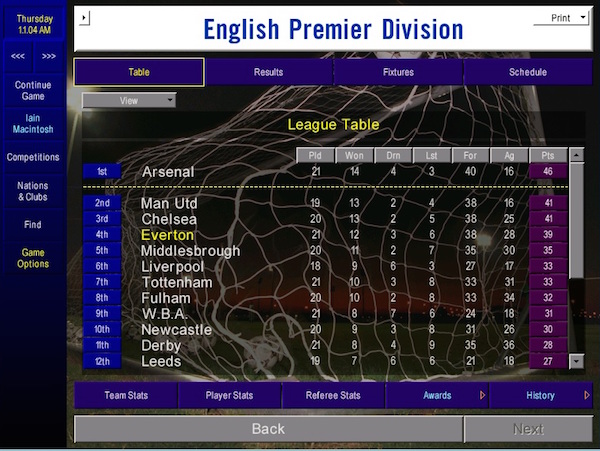 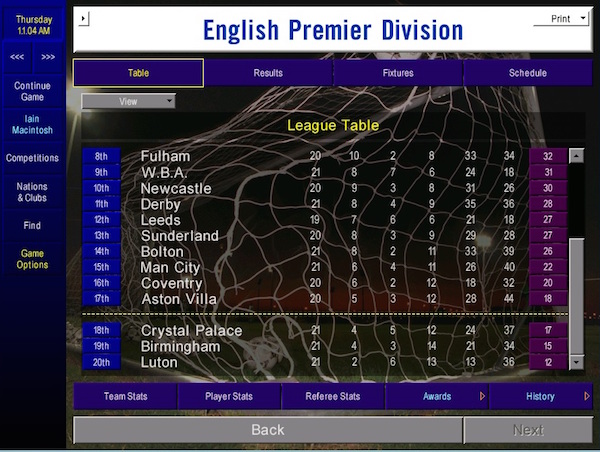 I’m not sure we’ll have a friend at the bank though. The money is really draining away quickly. I estimate that we’ll be £7.5m in debt at the end of the season, so I sincerely hope that some of my transfer listed players attract attention quickly. 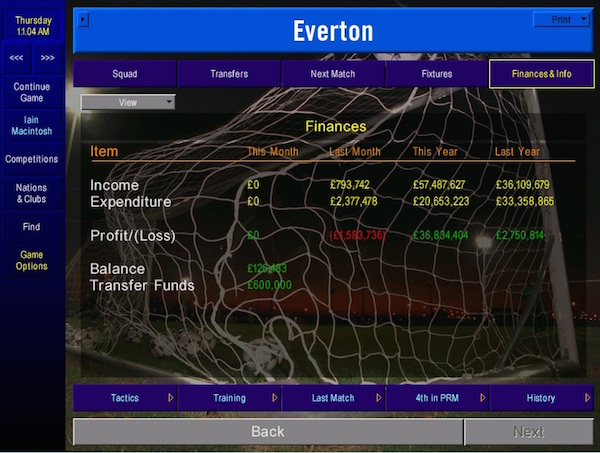 Those figures leave me a little downcast as 2003 turns to 2004, but then a message lands on my desk that brings new hope. I’ve had scouts everywhere since the takeover, filing reports on hundreds of players so that we’re ready to move quickly when the TV money arrives. And there’s one young man who certainly catches the eye. 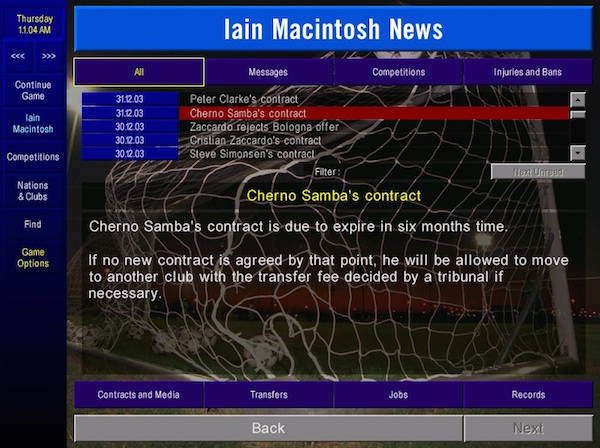