Let battle commence and let Blackburn fold up under pressure. Blackburn are an odd side. They’ve had four managers (Graeme Souness, Harry Redknapp, Steve Gritt and now Nicky Law) and they spent a season in the second division a couple of years ago. But they’re back now and they play in that very same 3-5-2 that can be so dangerous. This is at the Kings Dock and we need to lay down a marker. With that in mind, I’m selecting an attacking team. Li Tie is away on international duty, so Thanasis Tsikitsiris will make his debut. We’ll also combine Thiago Motta with Ivan de la Peña in the middle. And with so many old hands slipping out of the team, 19 year old Wayne Rooney will captain the side in this, his 113th appearance for the club. 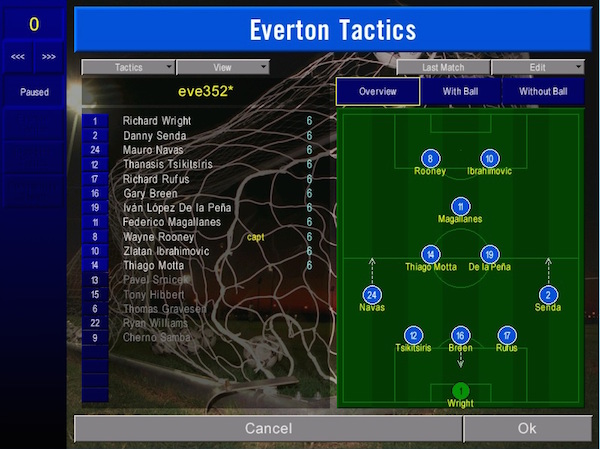 Now that is a satisfying first day back. It’s not perfect. Blackburn played well and made a few chances, but we held out with a degree of comfort. It wasn’t quite the performance I wanted from De la Peña and Danny Senda needs to be aware that his place in this team is very precarious, but look at all the other positives. A captain’s performance, and fine assist, for Wayne Rooney. A magnificent display from Mauro Navas on the left, promising signs from Thiago Motta and Ryan Williams, and just look at Tsikitsiris. His first day in the Premier League and he bosses it. We look better in every department. 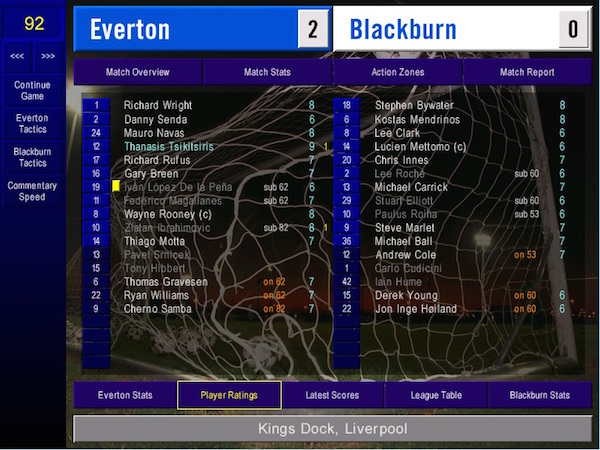 We head to Fulham in good spirits and there certainly isn’t any question of us making any changes. And yet, I’m concerned. I check back through the results and we’ve never beaten Fulham away from home with a back three. We’ve not beaten many teams away from home with a back three. Should we play 4-4-2? At the risk of unsettling Cristiano Ronaldo, I leave Ryan Williams on the bench, just in case. 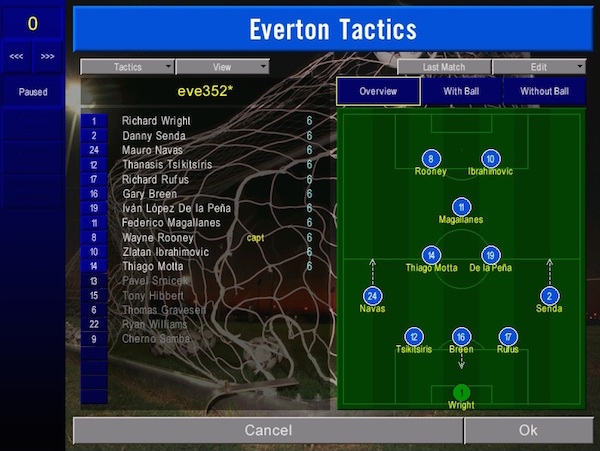 I was right to be concerned. Fulham score with their first attack and go 2-0 up after 25 minutes. We’re making chances, but we’re giving too many up and our defenders don’t seem to be in the zone. Navas gives us a lifeline right before half-time, but I’ve seen enough. Breen comes out and Williams goes on. We switch to a 4-4-2 with hard tackling. The difference is astonishing. Suddenly, we’re all over them. We lose De la Peña to injury, but not before he’s teed up Wayne Rooney for the equaliser. From the left wing, Motta supplies the pass that leads to Rooney’s second and our third. Fulham are all over the shop. We hit the woodwork, Edwin van der Sar makes a string of saves, we have one cleared off the line. And then, in the last minute, the Cottagers equalise with their only chance of the half. I’m upset, but not too upset. We’ve learned a lot here. 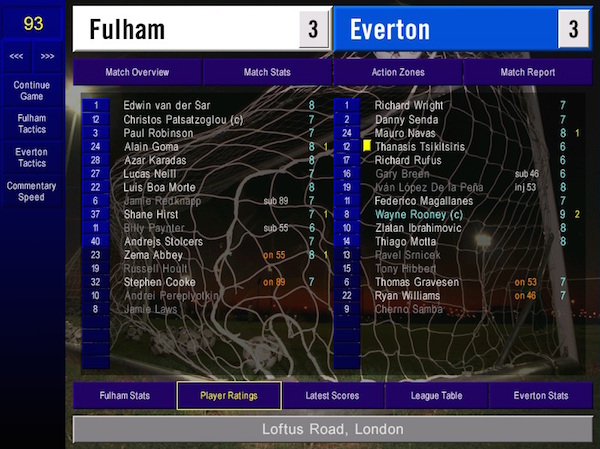 It’s Leeds at home for the final game of the month and we’ll stick to the back three. There will be one change, however. Li Tie has returned and Gary Breen will pay the price for his performance against Fulham. That’s not entirely fair on Gary, it could have been any of them. But I don’t know. There’s something about his face.

Leeds are still managed by Terry Venables, though given that they’ve lost their first two games of the season and that they finished in eighth last season, that may not last for much longer. They’ve always seemed the great waste of the Premier League. They have players like Mark Viduka, Alan Smith and Jonathan Woodgate, but they’ve won just a single UEFA Cup, and that was in the first season. Let’s see if we can hasten El Tel’s demise. De la Peña’s two week injury means a return for Thomas Gravesen. I wonder how his confidence will be affected by the sudden realisation that he’s expendable. 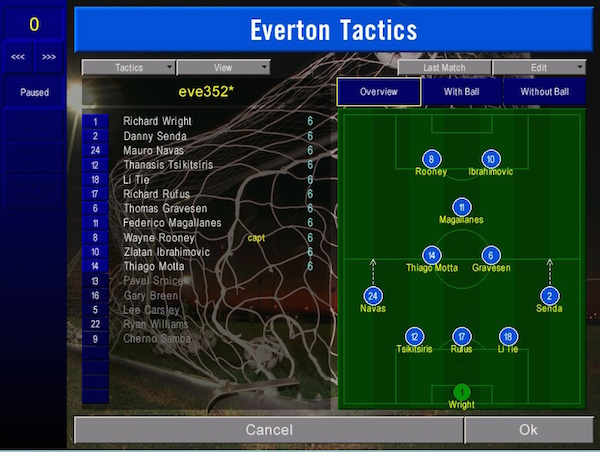 Wow. The scoreline flatters us a little, Leeds certainly had their chances, but we were well worth the win. Don’t be distracted by Paul Robinson’s dismissal either. It was 3-0 when he went off and 4-0 shortly afterwards. We were on the front foot from the first minute and I was actually quite upset that the game wasn’t over inside the first quarter of an hour. A fantastic hat-trick for Zlatan bodes well for the future, but the performances of Rooney and Motta should not be overshadowed. 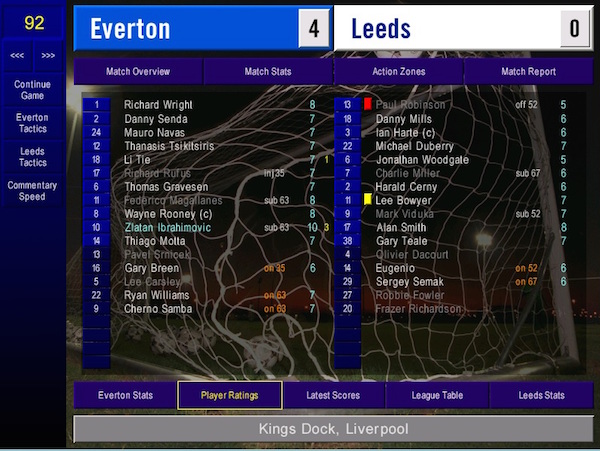 And then the news that has kept me on the edge of my seat throughout August. We have signed Gabriel Milito. This is the defender that I’ve been waiting for all my life. His attributes are amazing and to snatch him up for £5.5m…well…that might prove to be the bargain of a lifetime. This squad is almost ready to challenge. I would like one more wingback, but there’s no money left. I could possibly sell one of the three attacking midfielders, and the lead candidate would be the 29 year old Federico Magallanes, but that does seem a little harsh. However, if we’re going to push on, we’re going to have to make some difficult decisions. 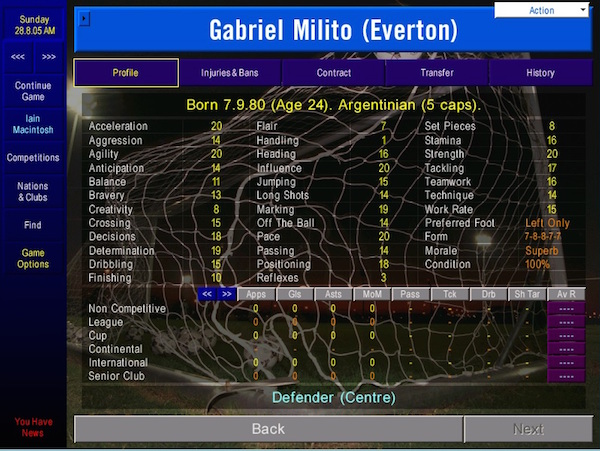 But that can wait for another time. It’s enough now just to look at the league table and smile. This is the start that we should have had last season. This is a fine start. At the very least, this is a much better start than Liverpool have had. And that pleases me in a way you can’t begin to imagine. 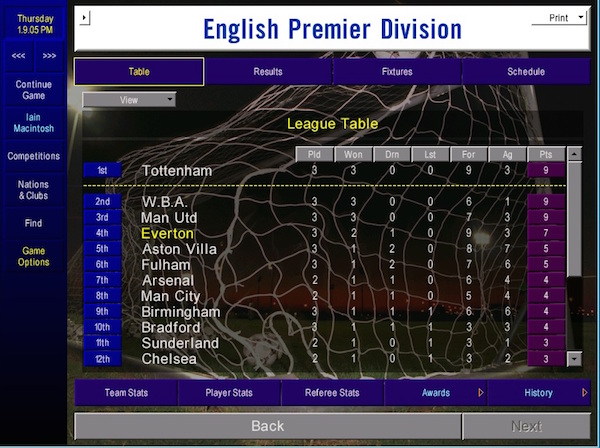 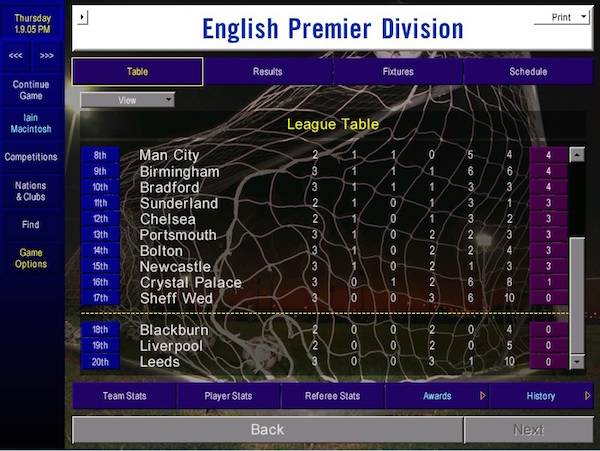