Our other issue is that we don’t have many centre-backs. Alan Stubbs is getting on a bit, David Weir got on a lot and I sold Joseph Yobo because he wouldn’t stop whining. Now, I did fully intend to make a number of acquisitions in this department, but then I spunked £10.5m on Zlatan Ibrahimovic and now the board are only letting me spend a maximum of £700,000. I got Garry Breen over the line, but that was it. So the other reason for shifting to a back four is that I don’t have many centre-backs.

So it’s a completely new gameplan for the 2004/05 season (though I reserve the right to return to 3-5-2 when we welcome weaker teams to the all new Kings Dock Stadium). Again, it’s something of a diamond formation. The full-backs are encouraged to run and cross the ball. Lee Carsley will drop back to provide cover. Redondo will martial the left side, Thomas Gravesen will take the right, though he’ll be given licence to get forward a bit. Federico Magallanes continues his role behind the front two, one of whom is Wayne Rooney, the other is Zlatan. And this is how we will open the season. This is how we hope to beat Fulham. 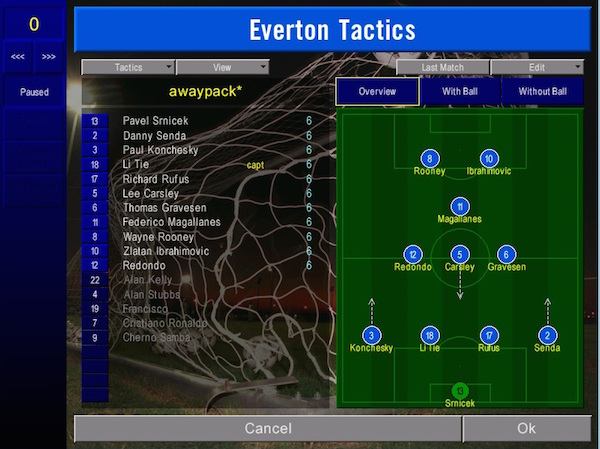 Good Lord, it actually worked. It wasn’t easy and there was some indoor language when Jun-ichi Inamoto opened the scoring after five minutes, but we got there in the end thanks to two strikes from Wayne Rooney. Worryingly, we never looked entirely secure and were grateful to Pavel Srnicek, in while Richard Wright completes a four game ban from last season, for keeping us in the game. But you always want to open your campaign with a win and we have a win, so let’s stop moping. 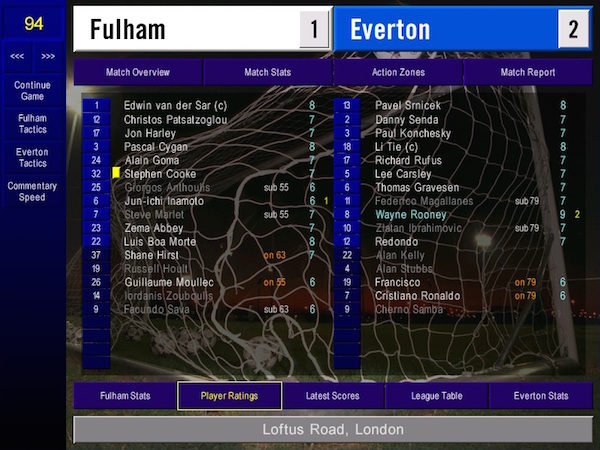 With that small amount of money left in the kitty, I make a £700,000 move for a midfielder that my scouts spotted a few months ago. Once a reserve at Watford, Gary Fisken has reinvented himself at Barnet, picking up 7.40+ averages and racking up the assists. He’s Proper Everton in that he’s aggressive, strong and physically fit, and that burst of pace and ability to pass could make him an interesting acquisition. With a bit of training in our ‘awful’ facilities, perhaps we can even get some of those more mediocre attributes up a bit. 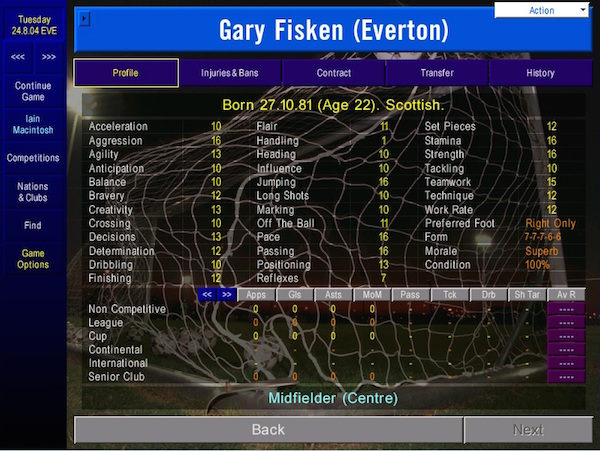 It seems sort of fitting that our first game in our new stadium will be against Bastard Bolton. We always seem to be playing Bastard Bolton with Bastard Sam Allardyce and Bastard Ricardo Gardner and Bastard Henrik Pedersen. We’ve only beaten them twice in nine meetings and I savour those moments. They play in the time honoured 3-5-2 formation and they’re very, very hard to stop. It’s man-marking all the way for us and a debut for Fisken because Redondo is exhausted. I really shouldn’t have signed him, you know. 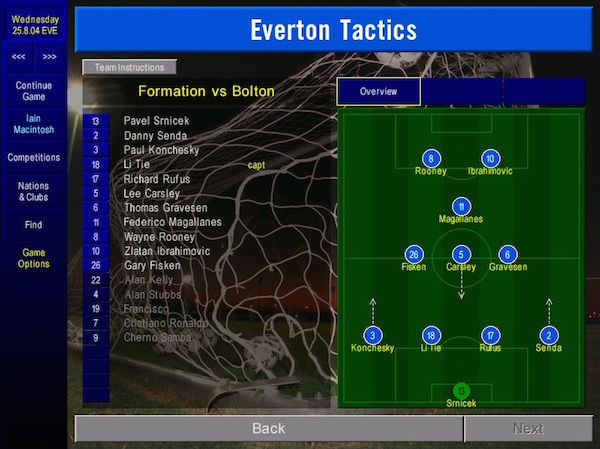 Harrumph. I don’t like empty seats and there were 13,000 of them for our opening game. That’s appalling. It’s nice to have 42,000 people in the stadium, it’s nice not to play in front of reams of bright yellow health and safety tape, but we should have done better there. And we should have done better here. We might have done if the referee had done his job and sent Sander Westerveld off after he brought down Fisken in the box after just 17 minutes. I lost my goalkeeper for four games because of a foul like that. All I’m asking for is a bit of consistency. We were already 1-0 down, thanks to a Charles Amoah shot from nowhere that bounced in off the post. Zlatan opened his account from the penalty spot shortly afterwards, with Westerveld shown only a yellow card, but then we were 2-1 down five minutes later when Amoah dashed through and beat Srnicek at the second attempt. A triple substitution after the hour brought new intensity and a Gravesen run enabled Rooney to equalise, but I wanted a bigger party for our big day. And I wanted more party guests. 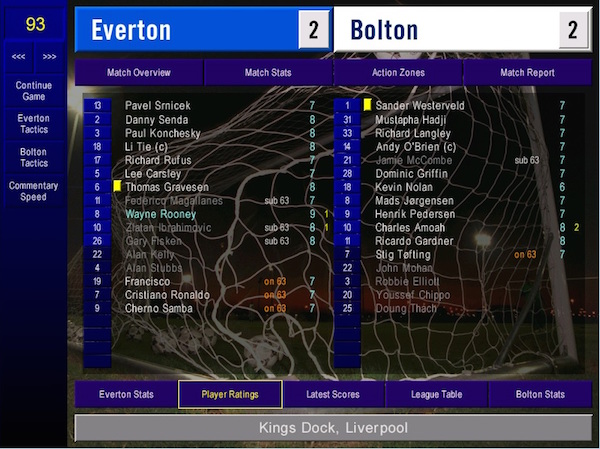 I hate Middlesborough. They’re just so average and dull and yet not so average and dull that we have a good record against them. Instead, we have an average record against them. We’ve won three, lost three and drawn one. We’ve scored eight and conceded eight. They’re always there, blocking us, upsetting us or refusing to get thrashed by us. All I think when I see them is, “Oh God, not them again.”

We have a few issues with the team, but nothing major. We’ve lost Magallanes to injury for a few weeks, but we’ve got Cristiano Ronaldo in reserve, so we should cope. Fisken will be denied the chance to build on his excellent debut, because he’s brought a suspension over from Barnet. We’ll give Redondo a chance to cough up a lung by half time. And, of course, we’re still missing Richard Wright thanks to the inconsistency of the bloody referees. I have a bad feeling about this. 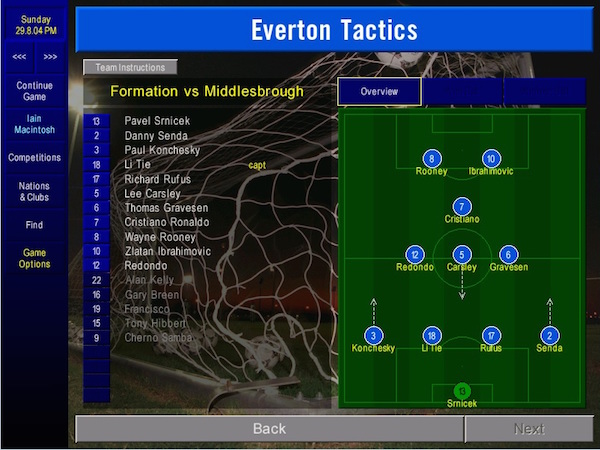 I was right to have a bad feeling. Two first half goals, one from a set-piece, and it’s game over. Even when we get beaten, it’s boring. We didn’t play particularly badly, we had seven shots on target to their three, but we couldn’t beat Mark Crossley. Sadly, they had no problem beating Srnicek. You can’t really be too cross with the players, but it’s an underwhelming start to the season. It’s also three games without a goal in open play for Zlatan. Has my great big indulgence been an even sillier move than it originally looked? 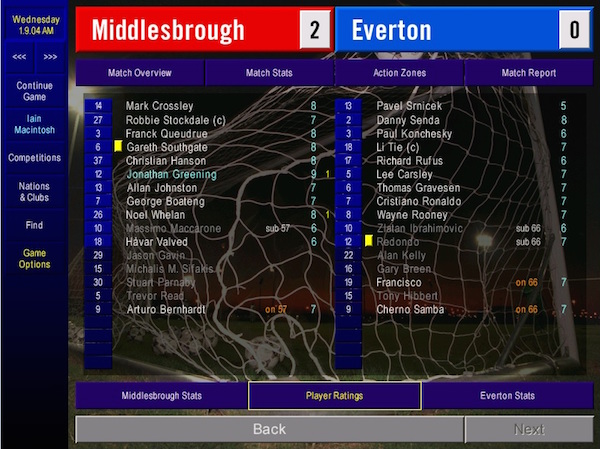 A tough September beckons with games against Leeds, Newcastle and Aston Villa. Let’s hope we click into gear soon. Mediocrity was a success when we had a dilapidated stadium and no players. It’s a little harder to justify being crap when you’ve got a team like this… 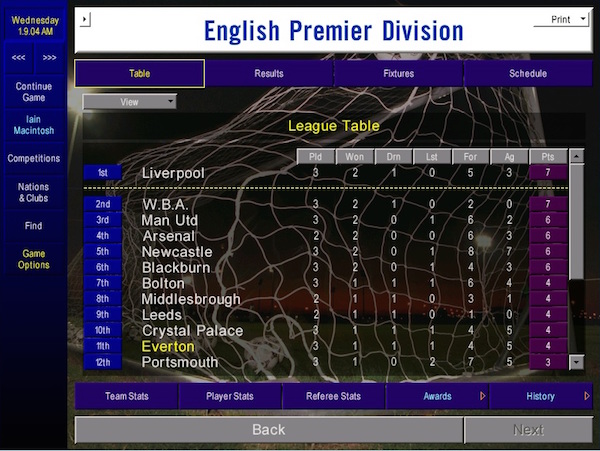 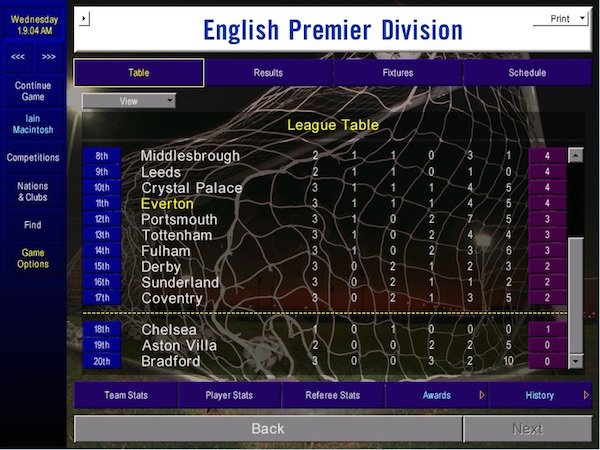