And so it begins. And it begins with Fulham.

Fulham have developed nicely over the past two seasons under Jean Tigana, avoiding relegation and finishing 15th in 2002, then pushing on for an 11th place finish in 2003. They’ve never been on a cup run and they’ve only spent more than £2m on one occasion when they paid £4.8m for Christos Patsatzoglou. They play a simple 4-4-2 and they seem really nice, but I am so up for this that I want to gouge their eyes out. 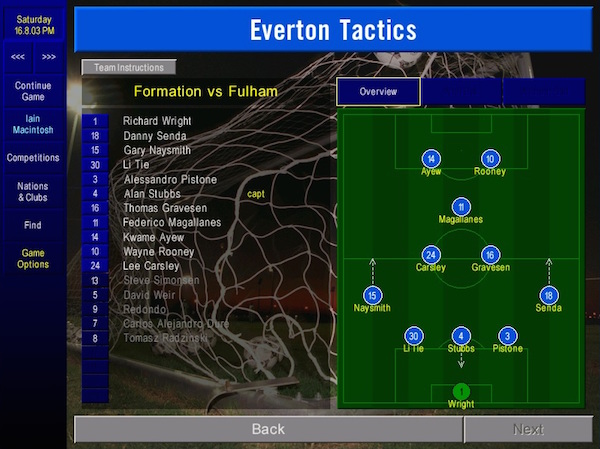 We start badly, dominating possession but to no discernible end. Then Federico Magallanes skews a clearance and John Collins slams home the opener with Fulham’s first shot. But we respond well, we start to pass the ball as if we’ve done it before and just before the break, Wayne Rooney tees up Kwame Ayew for the equaliser. Two minutes after half-time, Ayew puts us ahead. Fulham are unamused, they start to attack more. I remove Magallenes from the fray and push Redondo into the midfield to thicken up the wardog gravy. It works a treat. Fulham can’t get near us and with judicious use of defensive tactics, the game drifts away. We’ve done it. We’ve won a game! Nine more of those, a few draws, and we should be okay. 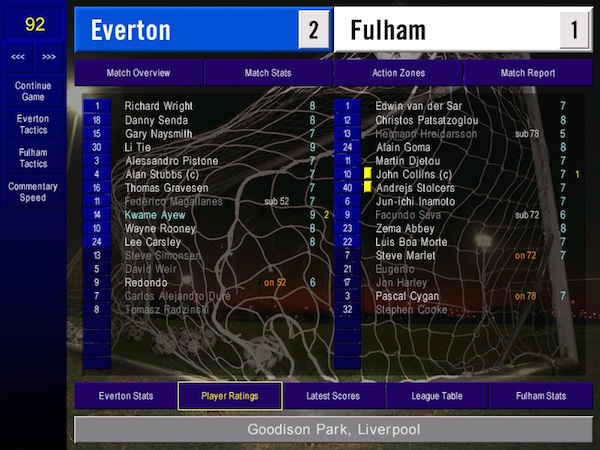 Someone is missing from the celebrations. Tobias Linderoth, consistently appalling in Everton colours, slips away to join Braunschweig for £525,000, a fee that I was forced to accept due to, well, you know. We wish him well. And if we ever qualify for European football again, we wish to be drawn against Braunschweig.

Next up is a trip to Maine Road to visit another of the Premier League’s more unspectacular members. Manchester City remain under the aegis of Kevin Keegan, lingering just above the danger zone and well below the fun zone. They’ve finished 14th and 13th, they reached the League Cup semi-finals in 2002, but apart from that, they’ve never really done anything. Perhaps this year will be different. After all, they’ve just splashed out nearly £6m on 22 year old Scott Parker, by some distance their record purchase since the game began. But they still play that 4-4-2 formation that can be got at if you work the space between the lines. In four games with City, we’ve won three and drawn one. This is up for grabs 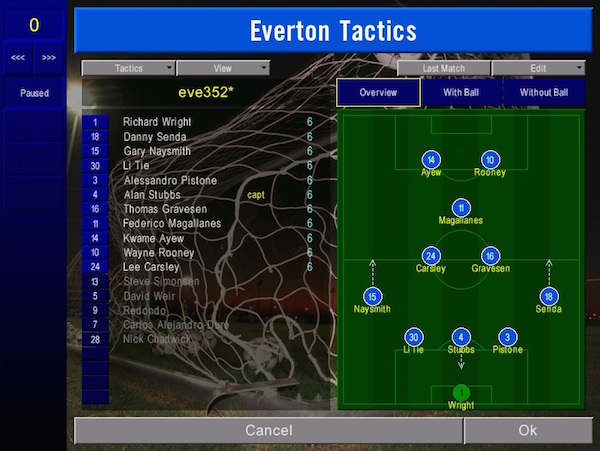 It is a first half of few chances, but Magallanes only needs one. He takes advantage of Sander Westerweld’s poor positioning and wallops one in from 25 yards. City have the better of the second half, making chances, but spurning them all. I replace the disappointing Thomas Gravesen with Redondo, but it makes little difference. With pressure mounting, I’m forced to lock everyone down into the old 4-5-1 formation from the first season. Finally, tranquility is restored and we hold out for a second victory. 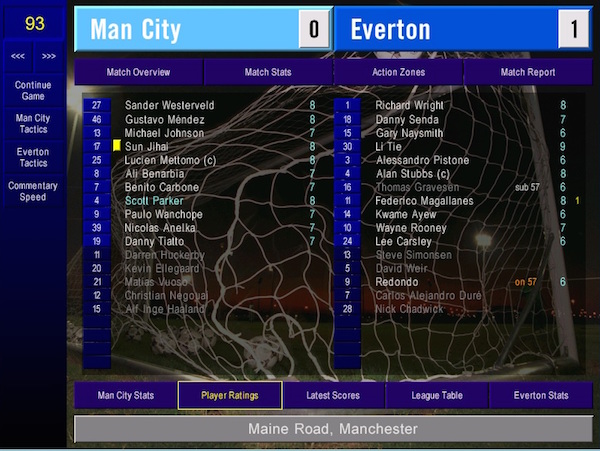 We welcome newly promoted Coventry City to our crumbling arena next and what a story they have to tell. A terrible start to their 2001/02 campaign saw them sack Gary McAllister and replace him with John Toshack, but while the former Real Madrid boss brought immediate improvement, he also attracted the attention of Celtic and duly skipped north at the end of the first season. There can’t have been many Coventry fans who were impressed with the arrival of Peter Shreeves, but the 62 year old absolutely nailed it, winning the title in his first full season and returning the Sky Blues to the top flight after just a two year exile. Their 4-4-2 has been beaten by both Manchester United and Manchester City so far this season, but they do have Julian Joachim, so we should tread carefully. Just the one change for us. Redondo for Gravesen. Who ever would have thought that we’d be in a position where we could drop Gravesen and not consider it suicide? 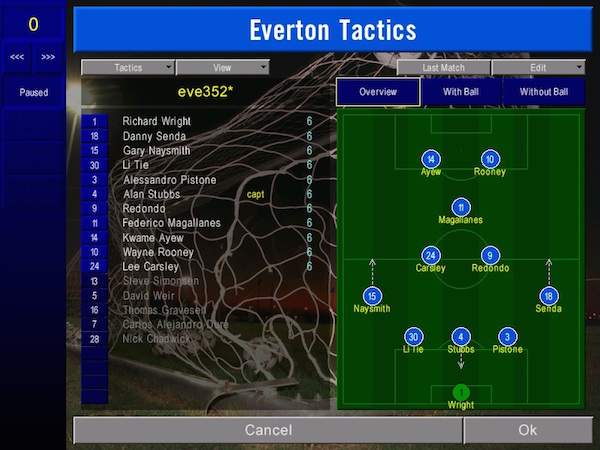 A hard game, in every sense. Coventry fight tooth and nail for everything, even when they’re decimated by injuries. They don’t give up when Ayew slips in Rooney for the opening goal. They don’t give up when we switch to ‘attacking’ and run at them after the break. They keep coming at us, missing so many chances that my nerve goes and I have to switch to ‘defensive’ and do some breathing exercises to make it to full time unscathed. We’re not playing as well as we could be and we’re enjoying a bit of luck, but it’s about time that Dame Fortune smiled at us, rather than just spiking our drinks and nicking our wallet. The only bad news is that we’ve lost Lee Carsley for a month. But that would have been disastrous news last year. We’re in a better place now. 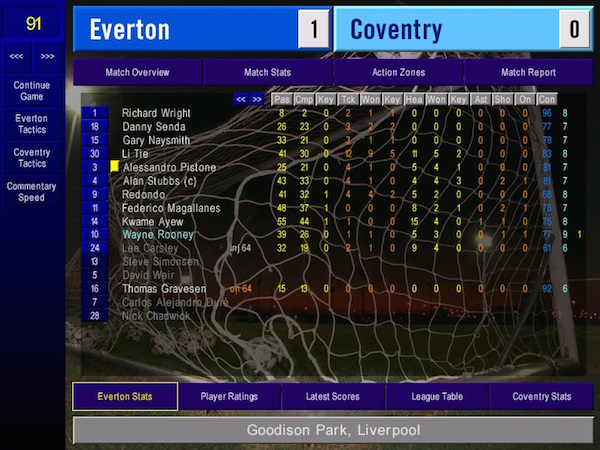 So are Sunderland. In a daring £20m double swoop, Howard Wilkinson lands Pablo Aimar and Park Ji-Sung. That, you have to say, makes them title contenders. 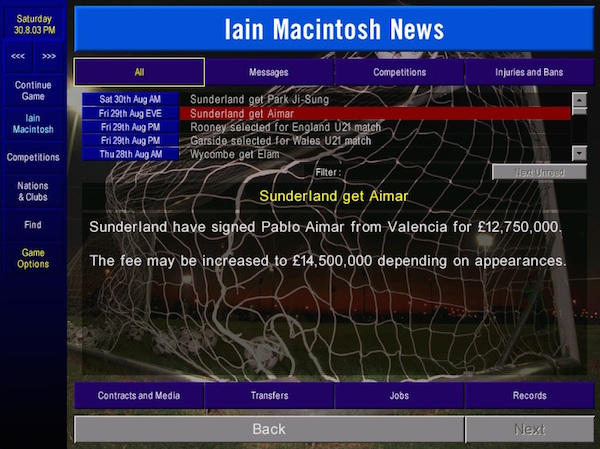 Now, I’m not one to complain about individual baubles, but who is Frank Rijkaard sleeping with to win Manager of the Month above me? With Li Tie winning the senior player award and Wayne Rooney bagging the young player, this should have been a clean sweep. I’m not going to let anyone see me hurting, but I’m hurting pretty bad right now. I think I need to be alone. 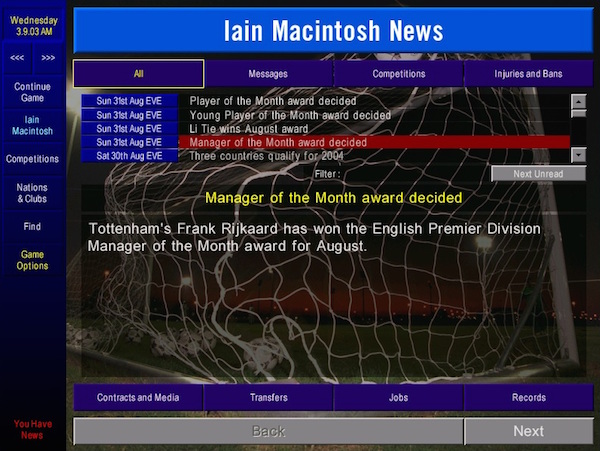 Nah, not really. We have nine points. We are, for a brief period at least, at the top of the Premier League table. Last season, we had to wait until October 23 before we won our third game. This may not last. This may all turn to ratshit before 2003 is out, but right now, we’re doing okay. And it could be worse. We could be Arsenal… 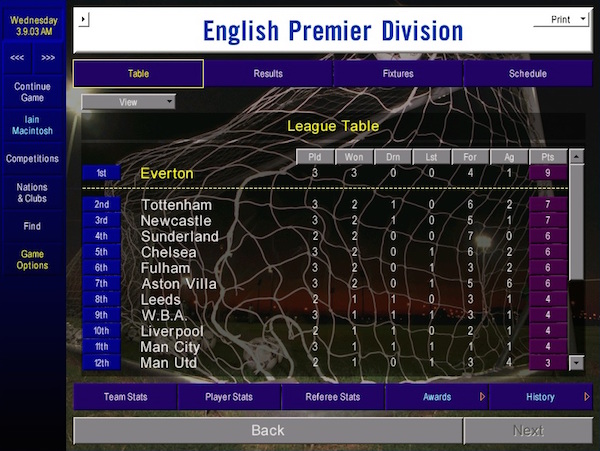 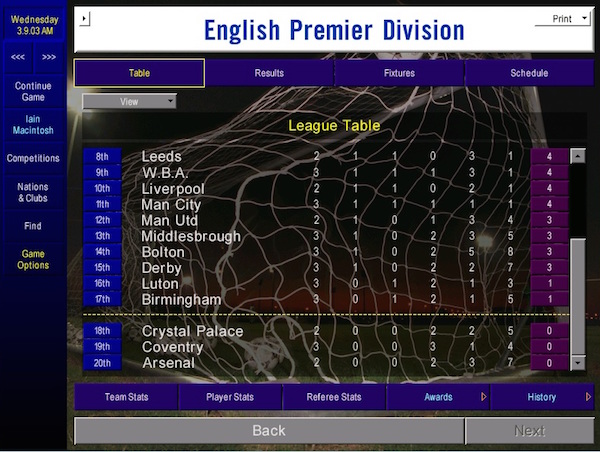