There’s not much room for patience in modern football. In this game, you can go from being the hero of the hour to the villain of the piece and it all takes is a summer of recklessly short-sighted transfer activity, a tear-stained speed wobble and a whirling wheel of formations. Since I elected to see out the season with a back three, Everton have stabilised and look well set to avoid the drop now. But we’ve been getting a lot of letters.

Now, I think that’s unfair. Stubbsy is a God. You don’t dismiss Stubbsy lightly. He gets to see out his contract. On account of being Stubbsy. And as for the Hibbert dissent…well, if you can’t see why he’s at Everton then, God, Jed, I don’t even want to know you.

Thankfully, not everyone is ripping up their season ticket yet. Take Emmet, here. Emmet can see that we’re turning around an oil tanker. He sees the long game.

But that tanker needs to keep turning and we’ve got Coventry at home. I have grim memories of Coventry from earlier in the season when they beat us with Jamie Carragher on the wing. You don’t forget stuff like that. You just need to try to find a way to carry on living with the pain. My way of coping is to go back, get out there and beat them. And yes, Ian Rooke, we’ll do it with Stubbsy. Because Gary Breen is injured 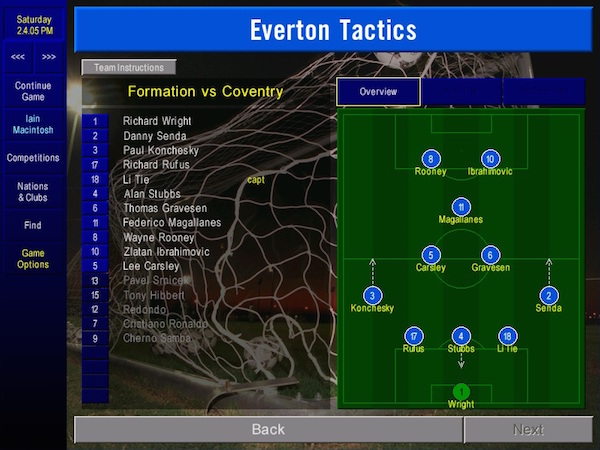 It doesn’t start well. Zlatan misses a penalty, which I didn’t even think was possible, but thankfully Wayne Rooney puts things right a minute later. Jussi Jaaskelainen is in inspired form, for the third time this season against us, but he can’t do it all on his own. Thomas Gravesen puts us two up before half time and then Zlatan is offered a second spot kick, which he converts without even questioning himself for a moment. We’re obliged to find a way to make it hard for ourselves, so Richard Rufus gets himself sent off with 34 minutes to go and Coventry score a consolation goal. But it’s not going to be enough. I haul everyone back into a 4-4-1 and we see the game out with a degree of comfort. That’s 34 points with seven games to go. It’s also our fourth consecutive home win. The only problem is that we’ve lost our last four on the road. Without scoring a single goal… 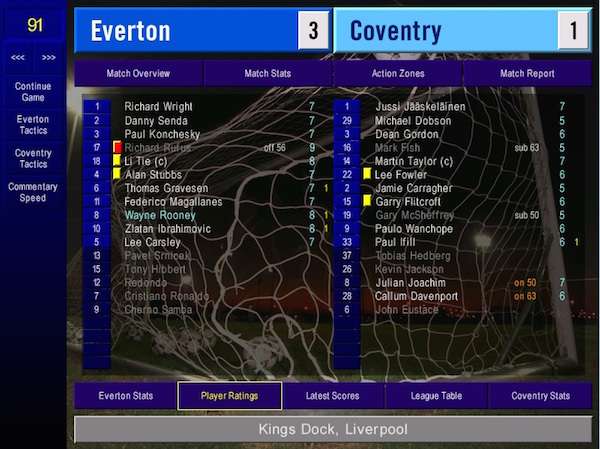 So our trip to Blackburn is an interesting one. I don’t want to unsettle the players any further with yet another new formation, but I can’t help thinking that repeatedly playing this back three away from home and hoping to win is like trying to open a tin of beans by shouting at it. But Chelsea are leading the way with a back three and they just won the League Cup. 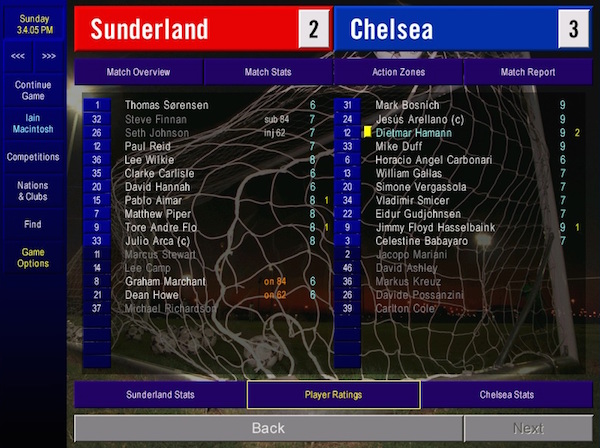 So with that in mind, I’m just going to stick to the same team, the same man-marking, the same emphasis on kicking lumps out of the opposition. And maybe we can just play our way out of this. 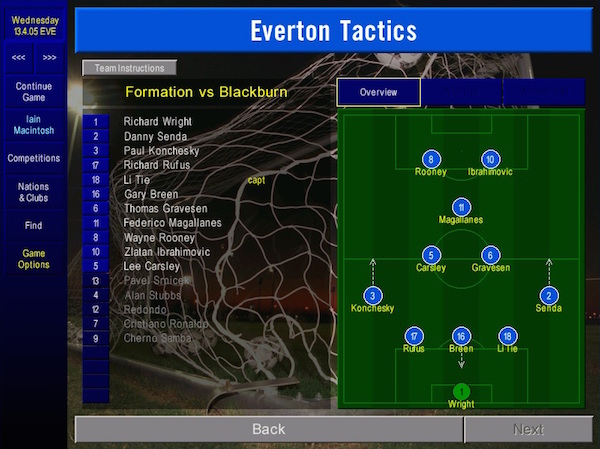 We’ve done it. Finally, we’ve won away from home. And we were worth it too. We really earned that win. It should have been more, but we still like to make life difficult for ourselves. Richard Wright, so inconsistent this season, was absolutely brilliant, but there were good performances all over the pitch. The only negative was that Zlatan, the scorer, was injured. Fortunately, he’s only out for ten days. That’s 37 points now, we’re ten clear of the drop zone and I think we’re going to be okay. 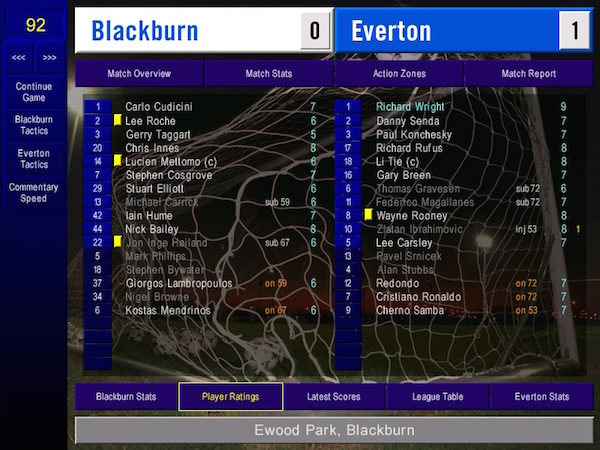 There’s no let up. Three days on and we’ve got Arsenal at home. Now Arsenal have something of a hold over us. We’ve played them seven times and they’ve won seven times. They’re also chasing Chelsea hard for the title. Zlatan is out, so Cherno Samba gets another chance up top. I guess what I’m trying to say is that I’m not hugely confident. 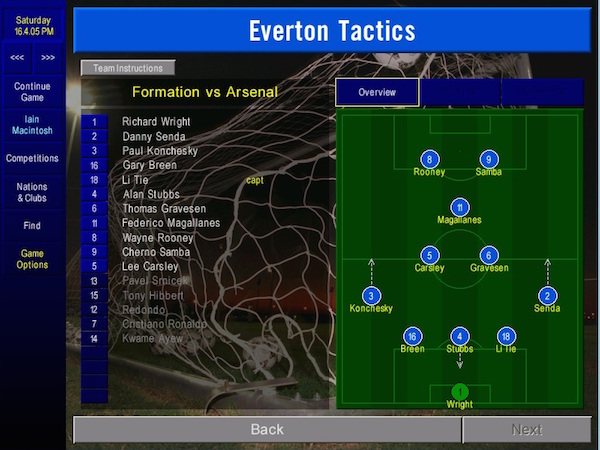 Well, well, well. What a difference a bit of form makes. The first half is drab, but that’s a considerable improvement given the way these games usually go. In the second half, dissatisfied with Samba’s contribution, my finger hovers over the tactics button and then he pops up to open the scoring. Another follows soon after from Gravesen and Arsenal capitulate with barely a whimper. Three wins on the bounce and what a time to grab them. 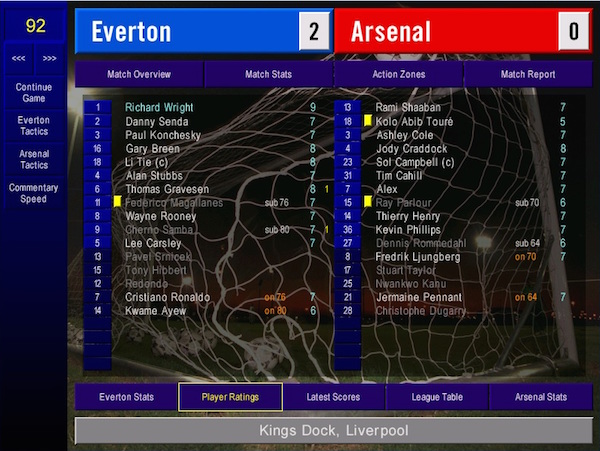 Because now it’s time to play Liverpool. Bloody Liverpool. We’ve never beaten those bastards yet and if we’re ever going to do it, it’s going to be now. They’re seventh. They just got done at home by Newcastle. They’re going to end the season empty handed. They must be already on their holidays. Surely even Gerard Houllier must consider his campaign complete. But it’s not complete. It’s not. I want to end it for them. Rouse yourself, you blue dogs of war. This is our time. 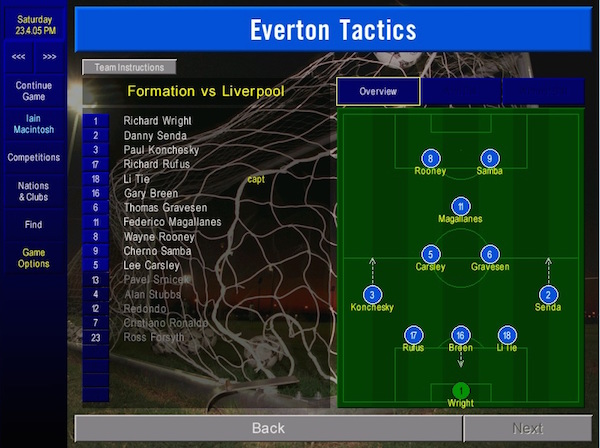 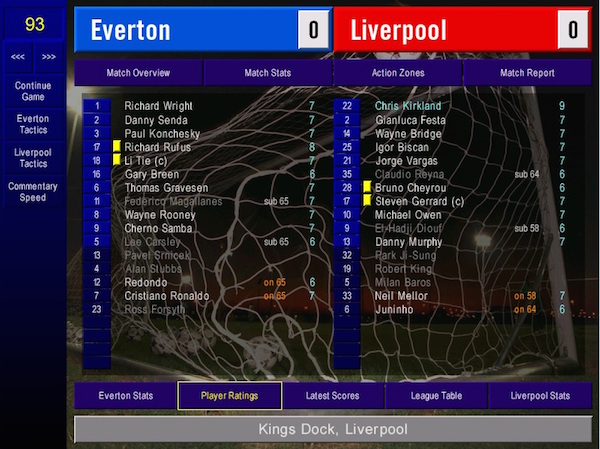 To make matters worse, we’ve lost Wayne Rooney for the next two weeks as well. He’d been very, very good since I dropped him for being very, very sad. Never mind. We’ll just have to try to get back on the horse and end the month with a win away at struggling Bradford. Can we shake off the disappointment and continue this impressive run? 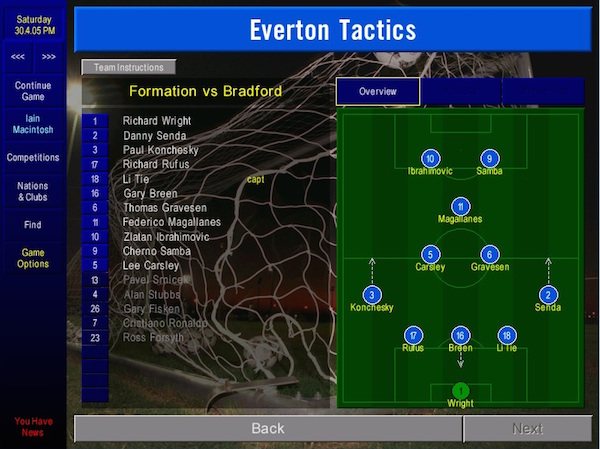 The first twenty minutes looked hauntingly familiar. We dominated, but found a goalkeeper in excellent form. We failed to score with lots of chances, they scored with one. And then we just clicked into gear and let the good times roll. Gravesen is back to being Gravesen. Magallanes has finally remembered where the goal is. They’re making it look so easy. I’ve never been happier 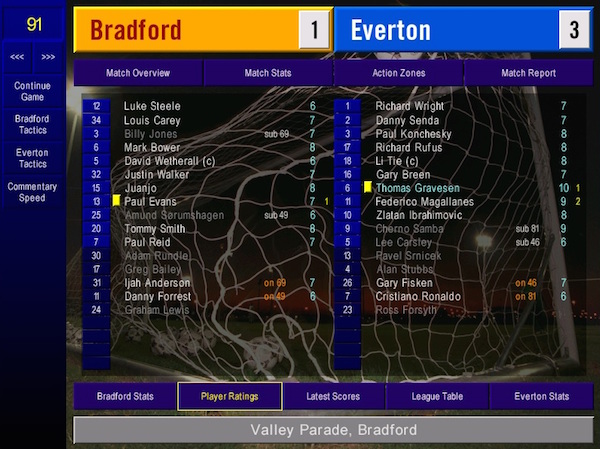 Well, look at that. Another win, three more points, the comfort of mid-table and the knowledge that this is no longer a disastrous season. It’s a mediocre one. YEEEEEEERSSSSSS! 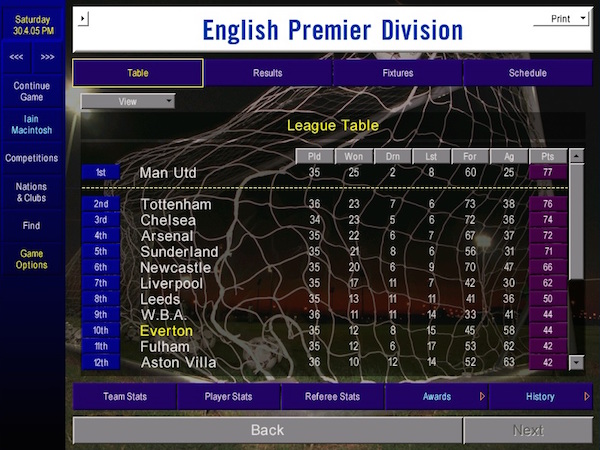 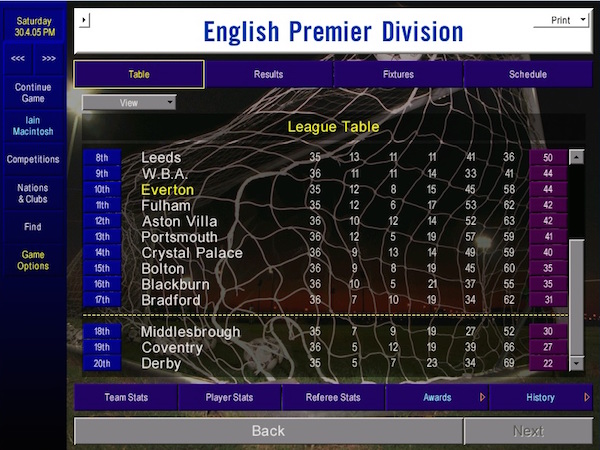