We haven’t won in eight Premier League games, a run that stretches back to January 11 when we swept Aston Villa aside. Six days later, we let a 4-1 lead over Newcastle slip in 13 minutes and we’ve never been the same since. The general advice for this sort of thing is to get your head down, work harder on the training pitch and keep at it, but when you think about it, that feels like the sort of shallow advice you might give to someone just to get rid of them. Like that time in 2007 when, as a nervous rookie reporter, I asked John Motson how best to prepare for covering an international tournament and he laughed, slapped me on the back and told me to buy World Soccer. That was helpful.

We’re up against Sunderland first, a team that always promises big things, but never delivers. They secured Champions League football in Howard Wilkinson’s final season, but under Steve Bruce they haven’t really settled. They play our formation, 5-3-2, and they’re uncomfortable with it. Mind you, so are we. We’re missing Wayne Rooney to injury, so back comes Cristiano Ronaldo to partner Kwame Ayew.

You can take a result like this two ways. You can focus on the negatives, like the way that Sunderland took a two goal lead without us making a single chance of note, or you can go for the positives, like the way Ayew hauled us back into the game with a late brace. I prefer positives. There’s clearly still spirit in this team, even if we’re not quite firing on all cylinders. And another positive; we’ve played two of England’s four Champions League qualifiers in quick succession and neither of them has managed to beat us. And another positive; we’ve all got our health. There, positive thinking is easy. Just don’t look at the league table, because we’re still sliding. 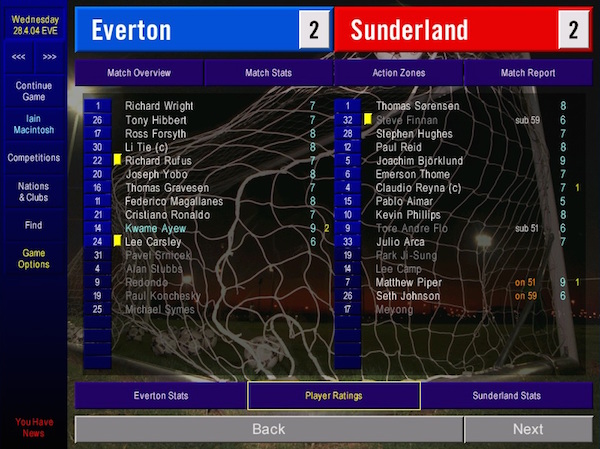 But while we can’t seem to win a league game to save our lives, it’s not all bad news. The PFA team of the year has been selected and Everton’s Richard Wright and Li Tie both make the cut. You’ll note with interest the emergence of CM01/02 legend Ryan Williams too. I’m not quite sure what Sun Jihai is doing in there. I can only conclude that my laptop hopes to strike some kind of lucrative trade deal with the Chinese government. 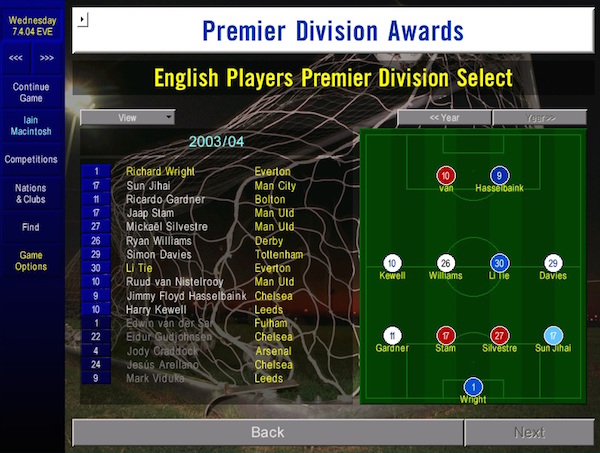 Congratulations go to Chelsea, winners of this season’s League Cup after a tight tussle with West Bromwich Albion. Quite the performance for regen David Ferguson there. No wonder Claudio Ranieri was happy to let John Terry move to Rangers in 2001.

Birmingham are crap. They were relegated in 2002 and they’ll be relegated in 2004. In 69 Premier League games, they’ve only won on 11 occasions. They play a bog standard 4-4-2 and if there’s any sense in this awful world, we’ll obliterate them. We’re missing Ayew and Joseph Yobo for African World Cup qualifiers and Rooney isn’t fit yet. No pressure, lads. 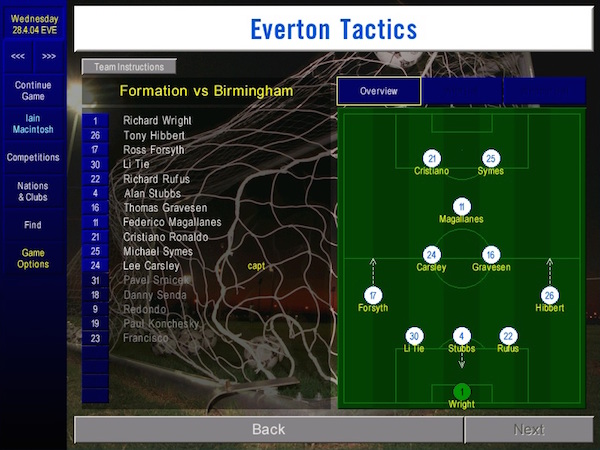 It’s grim and it’s gritty, but we get there in the end. Almost three months to the day after our last victory in the Premier League, we finally win again. As it has been so often this season, it’s Uruguayan playmaker Federico Magallanes who sorts out the mess, blasting one home from miles out after 51 minutes of joyless attrition. Michael Symes adds another, his first goal for the club, and then promptly injures himself. But we can cope with that today. We’ve won. I’d forgotten what it felt like. 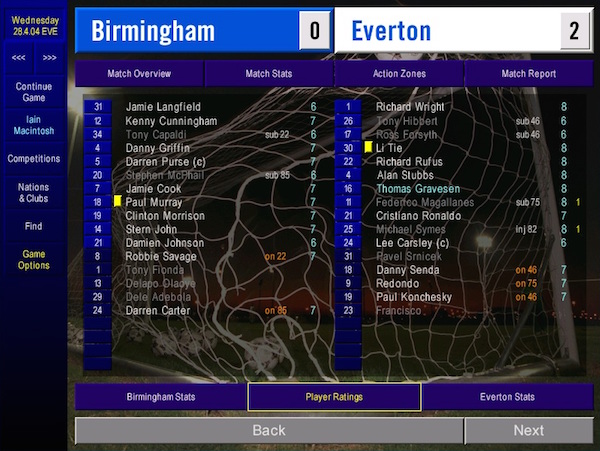 There’s some good news for Wayne Rooney this week, named in the England B squad. I wish we still had England B teams. Just look at the calibre of players available to national coach Trevor Francis. 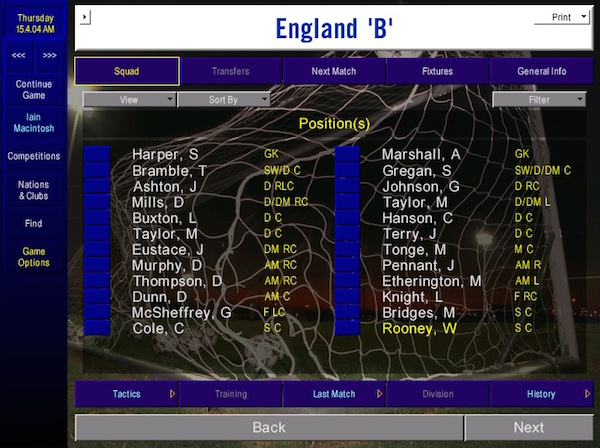 And so our attentions turn to League Cup winners Chelsea who just put themselves in the FA Cup Final as well and are hopefully still drained from the efforts. They’re an expensively assembled and exciting side, always just lacking the consistency and focus to challenge for the title. Or in other words, precisely what Chelsea were like before Roman Abramovich turned up. 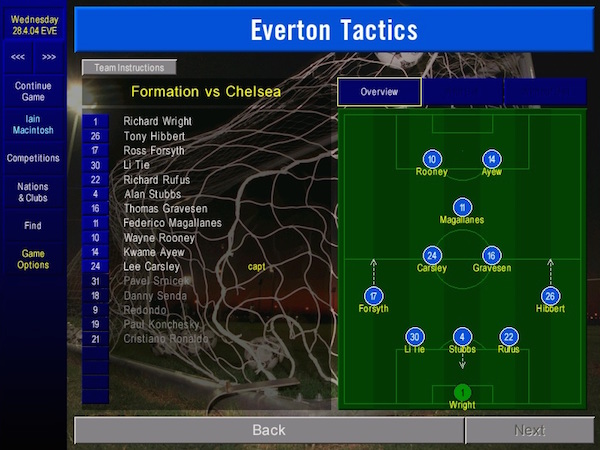 Satisfying, yet irritating in equal measure. Satisfying because we were much the better side, forcing world class saves from Mark Bosnich, rattling the post and the bar and giving our long suffering supporters a reminder of how we can play when we’re really in the mood. Irritating because Jimmy Floyd Hasselbaink scored, “a total fluke,” and then Markus Kreuz added another when we went all out attack. If we’d drawn that, I’d be unhappy. To lose it is entirely unfair. But at least we played well. And it could be worse, we could be Manchester City. What did Carlo Cudicini do? Manchester City before Sheikh Mansour are even worse than Chelsea before Abramovich. 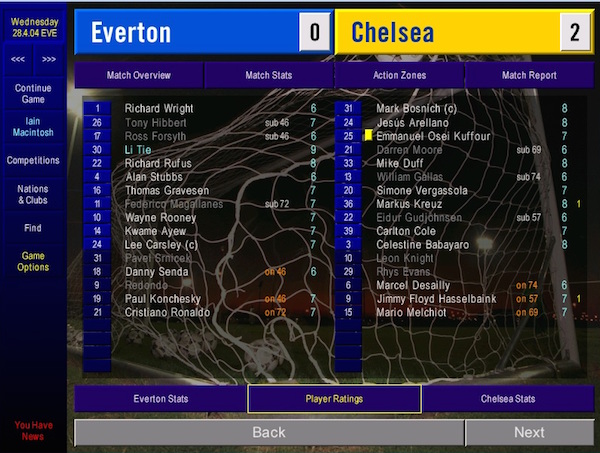 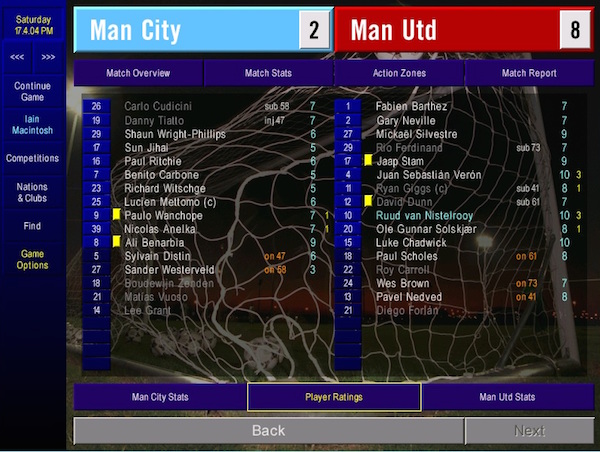 Just five games left now, so there will be no further rotation. It’s one final push for a UEFA Cup spot, or indeed for the Intertoto Cup, the much mourned pointless trinket that actually serves as a more interesting pre-season. I’ve applied for a place in that, so we need to finish as high up the table as we can.

We’ll need to be at our best to get something from Tottenham. They’re a decent side under Frank Rijkaard, chasing hard for a top four finish and still playing that annoying withdrawn striker version of 4-4-2 that drags your defenders out of line. Lee Carsley has disappointed this season, so he makes well for Redondo and the former Real Madrid man will take the armband too. Paul Konchesky and Danny Senda return to their wing back roles and Yobo moves in for Stubbs in the middle of the defence. And so it begins. Little hand says it’s time to consolidate a respectable upper mid-table position. 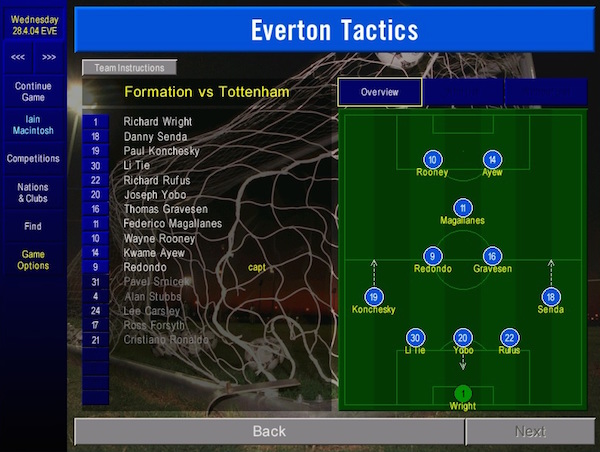 Well, we’re not going to consolidate much without scoring goals. We play well at White Hart Lane, we make chances, we defend with stout hearts, but that’s as far as it goes. It would have been wrong for either team to win this game, but draws aren’t particularly helpful at this stage of the season. It’s not looking good for Redondo though. With the best will in the world, this just isn’t working. He can’t keep up with the game and he tires so quickly. It’s sad really. It’s like the last half hour of Marley & Me. 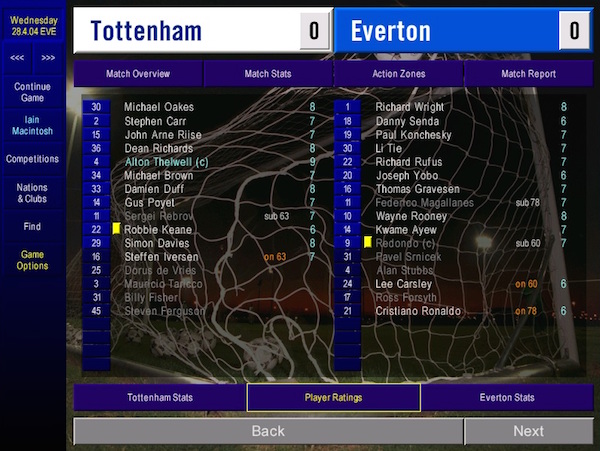 There are more African World Cup qualifiers, Rooney is injured again and Danny Senda is knackered, so there goes the hope of a settled, first choice team for the remainder of the run-in. Back come Stubbs, Ronaldo, Symes and Hibbert for the visit of Crystal Palace, embroiled in a relegation battle and fighting for their lives. Logically, we should batter them. But when has logic ever worked on our behalf? 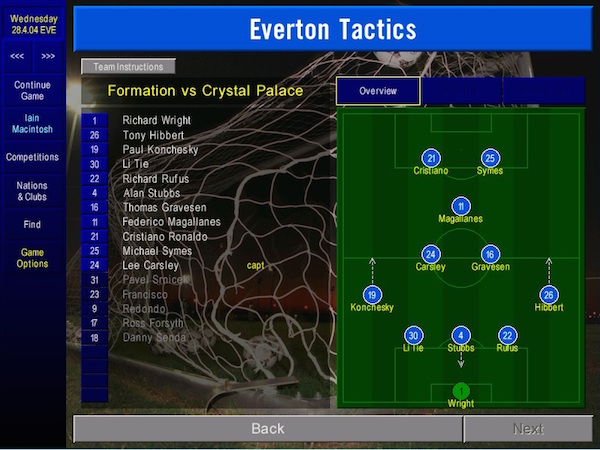 Not quite a battering, but that rarest of things; a comfortable afternoon at the office. As the wind ripped through the yellow health and safety tape that I presume to be wrapped around 20,000 condemned seats in Goodison Park, so too did we rip through Crystal Palace. Young Symes has done what young Nick Chadwick could not and has stepped up to score goals for the senior team. His brace puts Palace down, though perhaps not literally as everyone else at the bottom lost as well. That was the all important 15th win that means a season without relegation worries. Given the state we were in this time last year, that means this has been a season of success. Oh, what it is to have low standards. 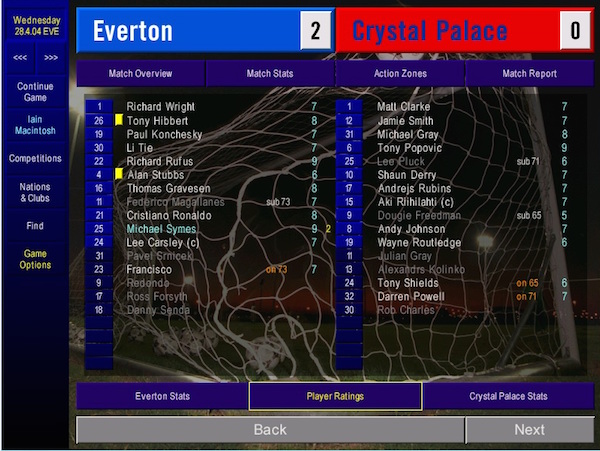 We play Bolton, Luton and West Bromwich Albion in the final three games of the campaign and I think that if we come out with fewer than six points, I’ll be very disappointed, not least because the Baggies have a second cup final against Chelsea to concern them. The higher up we finish, the more prize money we win, and we need it because we’re already £2.5m in the red. We’re getting close now. This summer, I expect my stadium to be rebuilt, I expect a wodge of TV money and I expect to finally be in a position where we generate money at the same rate as our rivals. And, of course, Cherno Samba is coming. 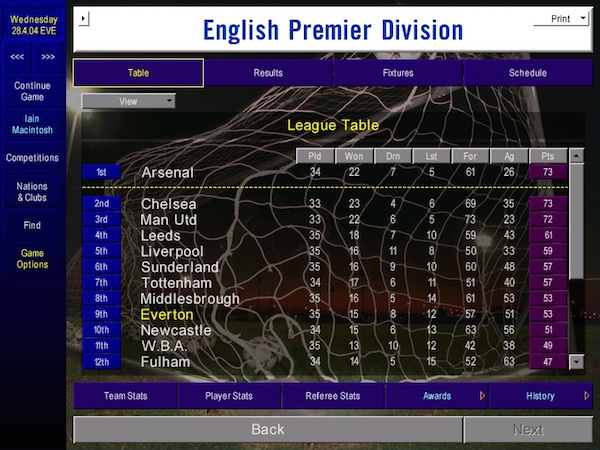 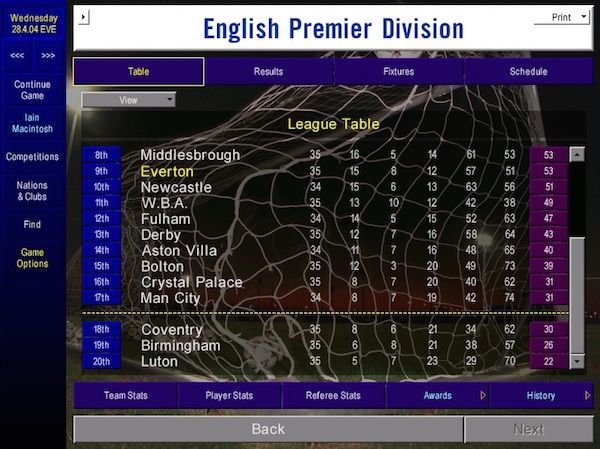