It has been a difficult week. Reaction to our two disappointing draws in August has been…robust. It feels as if this alternative Everton and the real Everton are intertwining somehow. Robert Martinez and I may not have much else in common, but right now we both walk into work every morning telling ourselves that we’re doing what’s right, while the mailbag tries to convince us otherwise.

@thesetpieces @iainmacintosh Iain!!! Fuck me. Just coz a player is quick doesn't make him great. You're the worst scout ever. Worse manager!

@iainmacintosh @thesetpieces Even your own company are 'Macintosh out!'. That's a new low.

@thesetpieces @iainmacintosh Iain, I have to ask. Do you keep being sh*te just to keep the column going?

But we must keep our heads held high. We *are* doing the right things. And we *are* getting better. Slowly. Everton were within a point of reaching the Champions League last season. A point! And while we’ve had more money to play with since the new owners came in, it’s never been enough to completely rebuild the team. We’ve always had to focus on just one or two areas at a time, hoping that we’ll hold out. That’s why we’re stuck with Richard Wright. That’s why the only way we can buy a new goalkeeper is if we sell a player first. And that’s why poor Federico Magallanes is on the transfer list. It’s horrible. It’s like taking your dog to be put down because you can’t afford to feed both him and the cat.

And where do we go in the search of renewed hope and form after those early setbacks? Bastard Bolton, of course. And they’re still playing that 3-5-2 formation that necessitates a defensive midfielder. So we’re back on the mad-arsed tactic that usually negates it well. And we also welcome back Gabriel Milito to the team too. Xabi Alonso will come in for Li Tie in the hope that he offers more creativity from the depths of midfield. Wright, however, will stay in the team because although the situation is bleak, it’s not bleak enough to necessitate Simon Royce yet. And, hey, Bolton have lost both of their games so far. Perhaps it’s a good time to play them. 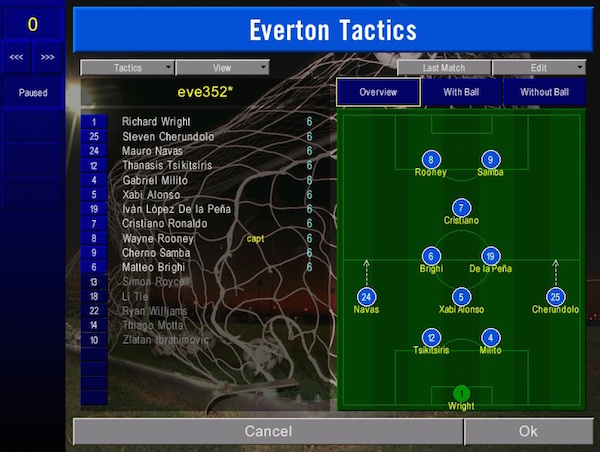 I have to admit that when Cristiano Ronaldo hit the post in the first minute and Bolton promptly ran down the other end to score, I did think about taking the computer into the street and tossing it in front of a bus. But we stabilised quickly. Ronaldo kept running at Bolton, we kept finding lots of room on the flanks through Steven Cherundolo and Mauro Navas, and the chances kept flowing freely. Cherno Samba hit his third goal of the season midway through the first half and then Ronaldo’s perseverance paid off when his fifth shot hit the back of the net. Taking a leaf out of my 2001/02 campaign playbook, the mad-arsed tactic was quickly changed to the 4-5-1 defensive, men-behind-the-ball tactic that worked so well in the days of Kevin McLeod and Joe Max-Moore. We held out with absolute comfort. Our first win of the season. 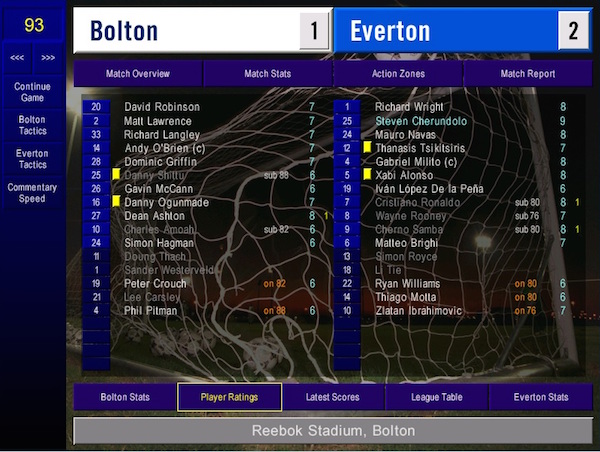 It’s time to return to European football. It would have been nice to do so against a tiny team of no-marks unable to keep up with the pace of the Premier League’s most infuriating team, but instead we’ve got Porto. And they’ve got Deco as the number 10 in their 4-4-1-1. I’m so scared of him that I’m going to stick with the mad-arsed shape in order to neutralise him. Injuries to Thiago Motta and Ivan de la Peña mean that Xabi Alonso shuffles up and Li Tie returns. Let’s try not to be as bad as we were in 2002… 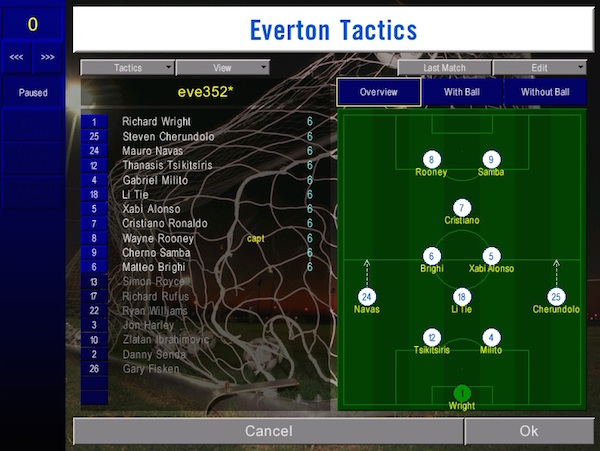 They didn’t even pick Deco. Instead, they played a weird 4-5-1 on the counter that caught us completely unaware. For the most part, we held at them bay, trying to match their every move and catch them on the break. But then we lost Milito to an injury that will keep him out for two months. We weren’t sharp enough up front and Rooney is starting to concern me, but for all that, when Rudolph Douala scored an incredible solo effort in the 82nd minute, it did feel a bit harsh. But if you’re going to lose, lose like that. Lose with a plan and with strong performances. Lose to a moment of genius. Besides, we can get at them in the second leg. I didn’t see anything special here. 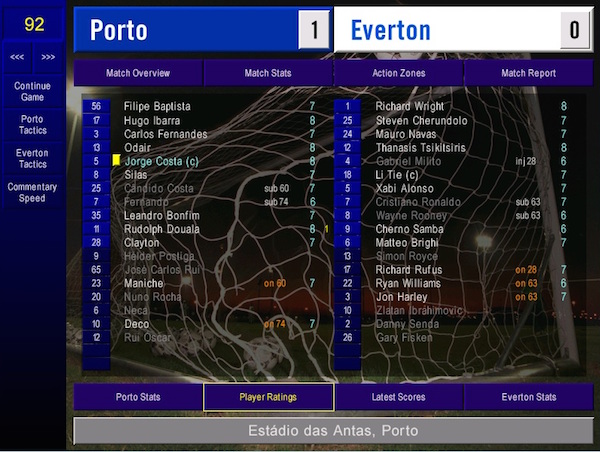 If you’re wondering why Zlatan still isn’t getting back in the team, it’s because I want to see him score in the reserves before I bring him back. And he doesn’t seem capable of even managing that. We’ve got newly promoted Middlesbrough at home and I’m afraid I just don’t have any confidence in him. They play a startling 4-diamond-2 formation with lots of running, so we’ll be sticking with the same shape. Richard Rufus comes in for Milito. That’s a like for like switch, isn’t it? I’m sure we’ll barely notice his absence. 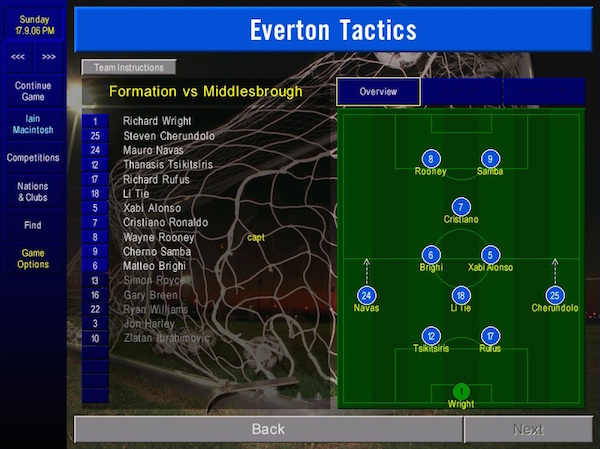 I do love it when a plan comes together. Rooney scores. Samba scores. Boro don’t have their first shot until the 83rd minute. We have a whopping nine shots on target, hence the unusually high rating for Antti Niemi. And that performance came without our captain, indisputably our best player. I am very, very pleased with this. 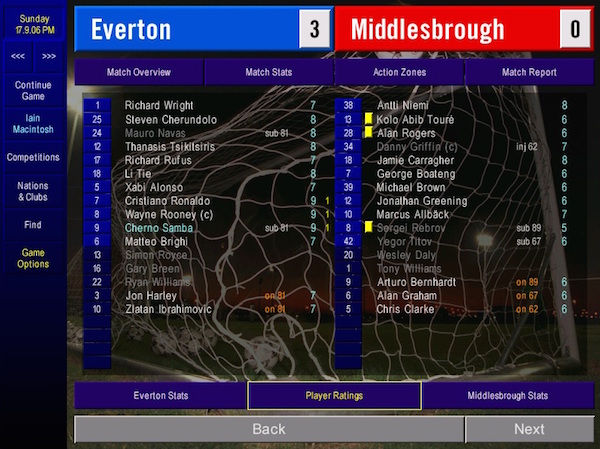 Manchester City are a curious beast under Harry Redknapp. They actually inspired the mad-arsed formation with their own eccentric 3-3-2-2 thing. Last season, it brought them a thoroughly respectable ninth place finish. This season, not so much. They’ve won just one of their first four games, though they did win the Inter-Toto Cup in the summer. I see absolutely no reason to change a winning team. 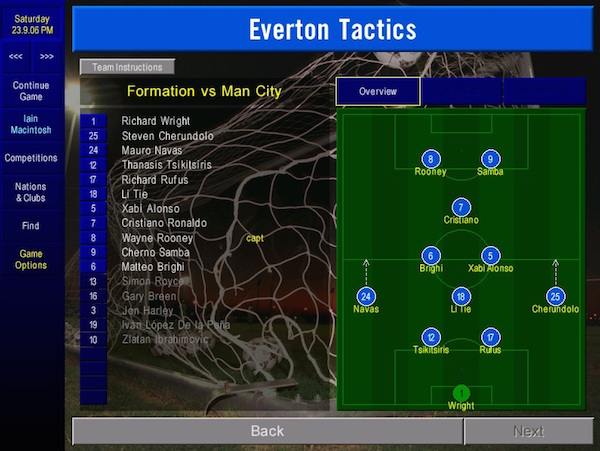 It’s a trap. City go with a 3-5-2, so I have to make some early tweaks. They’ve built everything around Michael Foley Sheridan, the clever bastards. But while they make a handful of chances, we utterly dominate them, especially after Li Tie’s injury pushes the underperforming Alonso back into the anchor man role, where he’s far more comfortable. Ronaldo alone has nine shots, putting six on target. That would be a healthy return for an entire team. The fact that we have 20 shots in total and only score twice does indicate a bit of a hangover from last season, but after three wins on the spin, I’m not really in the mood to quibble. 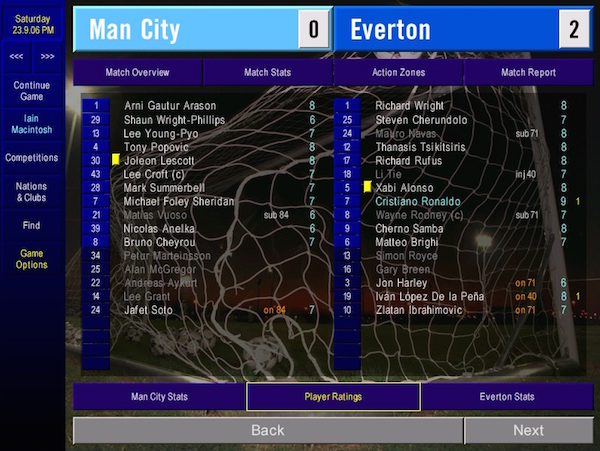 We don’t have a great record against Chelsea. Claudio Ranieri has bested us eight times out of eleven and he’s cultivated an exciting, expressive football team, albeit one that does rather better in the cups than it does in the league. Again, I see no reason to change the team, aside from replacing the fallen Li Tie with the returning Ivan de la Peña. A win here would be a phenomenal result. 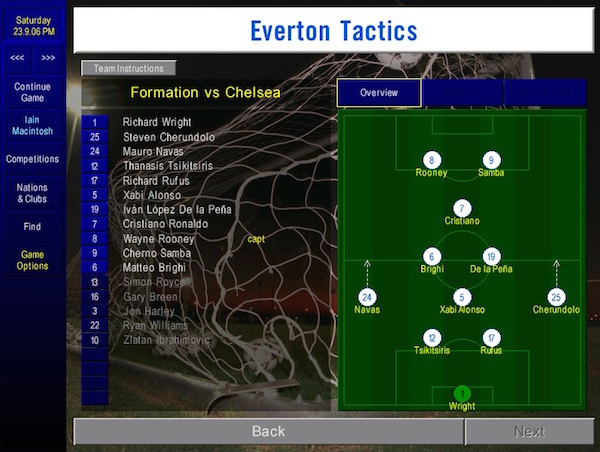 You know what? A draw is a pretty phenomenal result too, especially when it’s secured like this. There’s no question that Chelsea are the better team from the back, where Darren Moore puts Rooney in his pocket, to the flanks, where Celestine Babayaro is unstoppable, to the front where Wright is kept very busy indeed. But despite falling behind in the first half, we level in the second through Brighi. A hard-earned draw seems to have been snatched away from us in the 85th minute when Chelsea win a penalty, but it’s Wright who saves the day. In the five games since his disaster at Newcastle, he’s picked up one 9 rating, three 8s and a 7. That’s quite a response. It’s almost as if he knew how cross I was. The only sad news is an injury to Zlatan. He’ll be out for three weeks. He’d just done a goal for the rezzies too. 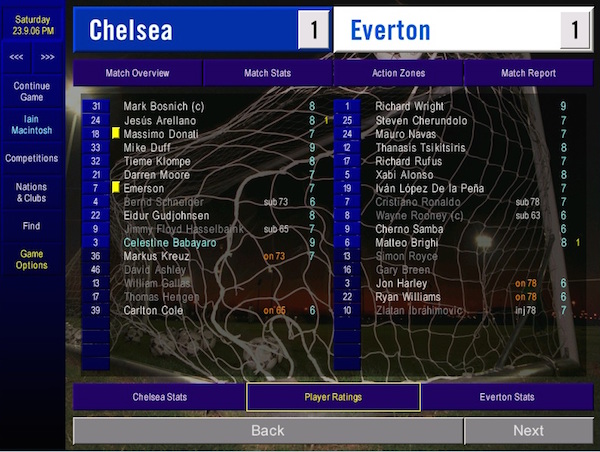 It is a sad day at the Kings Dock however. We have agreed a deal for Federico Magallanes to leave the club in December. Fredo arrived at the end of the first season, a rare bit of class in an otherwise appalling football team. He hit 20 in his first season and continued to match the strikers for goals even as a rotation option as Ronaldo developed. Though that perhaps says rather more about the strikers than it does Fredo. He leaves with our great love and affection. In three months, anyway. 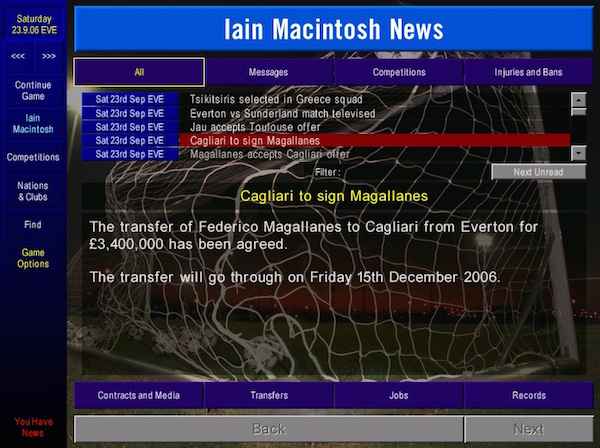 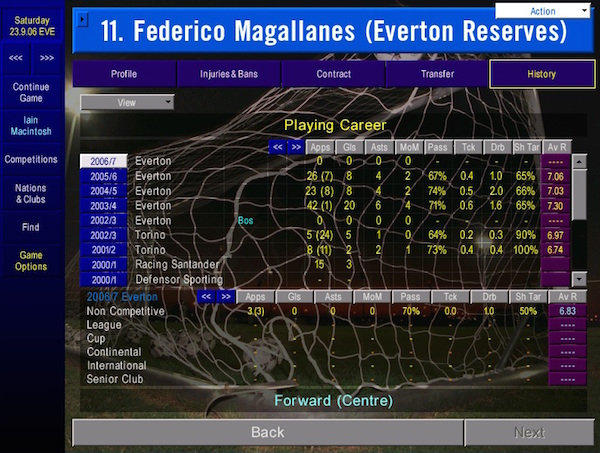 It has been an incredible month, but it will mean nothing if we crash out of Europe at the first hurdle again. We are starting to run out of players and Matteo Brighi is concerned about a lack of squad depth, so I need to scan the free transfer market. But I haven’t got time before this game. We’ll have to go with what we’ve got. It’s worked well so far this month. 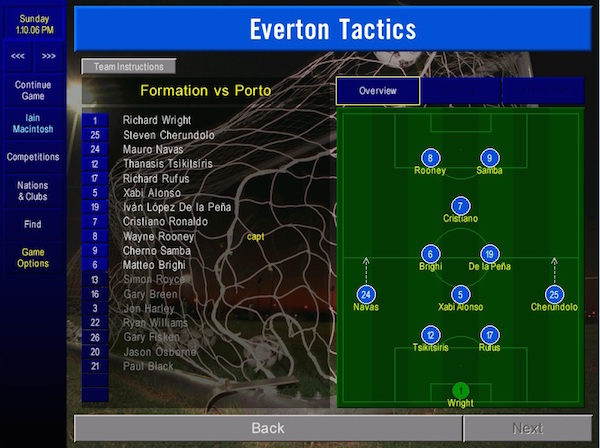 And that is how you want see off September. In the second minute of the game, Porto keeper Filipe Baptsta wiped out Rooney and got himself sent off. They switched to a 4-5-0 formation and went into defensive mode. Rooney scored the penalty and Porto never again across the halfway line. Naturally, this being Everton, Porto’s reserve goalkeeper turned out to be the reincarnation of Lev fucking Yashin, we hit the woodwork and three times and relied upon a De La Peña free kick in the 90th minute to get over the line, but it’s nice that we keep things interesting for the fans. 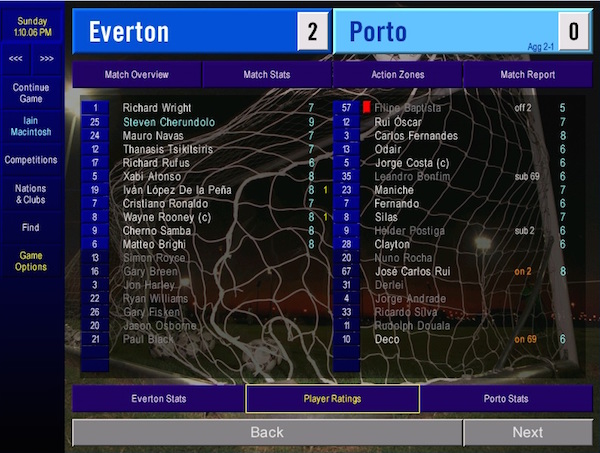 And that brings a very satisfying month to a close. Three wins and a draw in the league, and Porto’s dripping scalp in our belt. We’re fifth and we’re unbeaten while Samba’s four goals are enough to land him the young player of the month award, new signing Cherundolo is running at a 7.75 average and we might just have a new face joining us in a few days. Mmmm. Yes. Yes, I am happy. I think I shall have an ice cream. 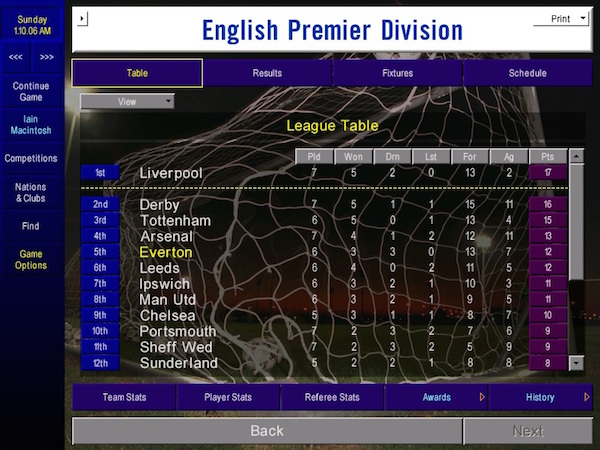 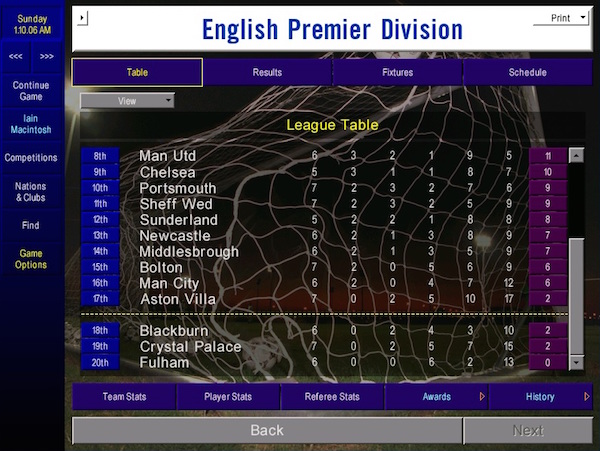