“Bill’s gone!” shouts one of the suits as he clicks and clacks down the corridor. “Didn’t anyone tell you?” 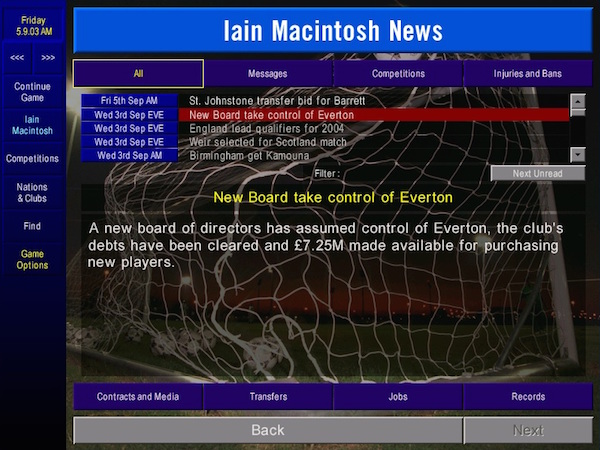 It has happened. My God. It has finally happened. The debts are gone. The clouds have lifted. Our lives are bathed in the glorious, redemptive sunshine of someone else’s money. There is £8.25m in the transfer kitty. I don’t know what to do with it. I honestly have no idea. And, dear reader, I have never, ever moved so quickly to save a game. It’s all over. The misery, the poverty, the endless struggle against insurmountable odds. We’re a proper football club again. We can build. We can say, “We need a new striker,” and then go off and actually buy one. A good one. This changes everything. It changes absolutely everything.

And yet, we cannot rush into action. The structure of this club is more important than the playing staff. The future must be secured before we worry about the present. Idiocy and incompetence brought us to the edge of oblivion. We cannot repeat those mistakes. The first objective is to repair the damage that was done to the stadium. We must expand again, we must bring the people back within our walls. We need to get that capacity over 40,000 once again. 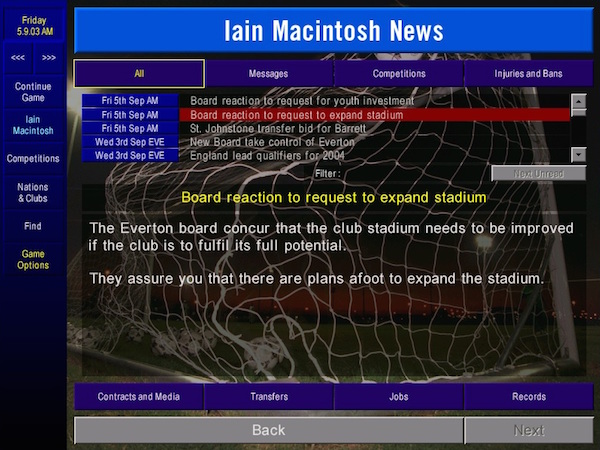 Thankfully, the new owners are no fools. Unfortunately, they do not share my belief that an overhaul of the facilities is just as important as fixing the stadium. I’ll try again at the end of the season. We need to develop our own players. 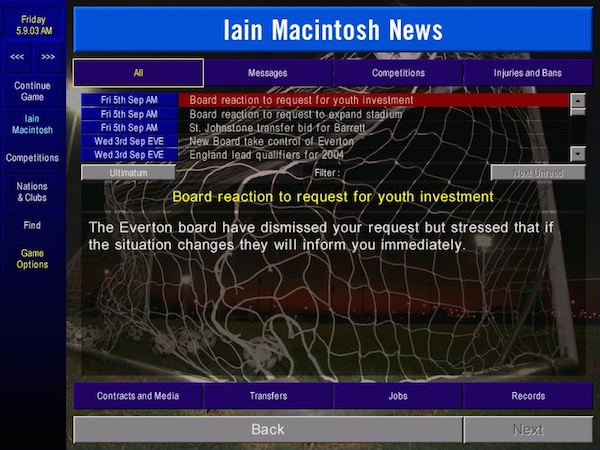 Naturally, I take a look at the transfer list to see what’s on offer. It’s actually quite disappointing. We could blow the lot on Benny McCarthy, but there seems little point in that. Kwame Ayew is scoring freely and we have Wayne Rooney tied to a new long term contract. Frank Lampard is on the transfer list for £3m, but we have four excellent central midfielders already, so there’s no reason to splash the money in that direction either. I turn to the shortlist and remove all the players that necessity forced us to consider. Two names remain. Richard Rufus and Cristiano Ronaldo. Two £1m bids are immediately tabled. Now here are two players that I will take a risk to recruit. Here are two names synonymous with success. When they come to write the history of Everton Football Club, I want Rufus and Ronaldo to have chapters to themselves.

But after all that excitement, we still have some football to play. Medicore Middlesbrough are an entirely mediocre club. They do mediocre things. They finished 14th last season and 10th the season before. They do not fare well in domestic competitions, but they did win the Intertoto Cup in 2002, opening the door to a mediocre third round exit in the UEFA Cup. But there is one thing about them that stands out. They are the first team we have met that has dared to field a regenerated player. Brett Harper is 17 and has a finishing of ’20’. There’s nothing mediocre about that. Unsurprisingly, Everton do not have any regens. If we ever had any young footballers, they were probably sold on eBay to ensure that we could pay the gas bill. That won’t happen again.

We make just a handful of changes. Ross Forsyth makes his debut at left wingback after his £100,000 move from St Johnstone, Thomas Gravesen lines up alongside Redondo after Lee Carsley’s injury and Joseph Yobo replaces Alessandro Pistone. I hope the players realise that their situation has changed. There will be competition for places once again. 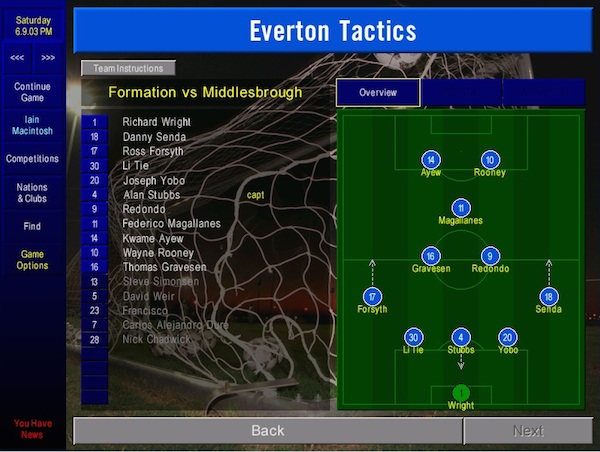 They realised. There is just a flicker of fear when Noel Whelan urinates on the fireworks in the opening moments, but it’s not long before we step up and take the fight to our mediocre guests. Forsyth is up and down the left flank like a train. He beats four men and wins a free-kick, Rooney lifts it into the box and Ayew heads it home for the equaliser. In the second half, Redondo smashes us into the lead and it’s not long before Federico Magallanes has added another to secure the game. The new owners are impressed, they tell me as much afterwards. Four games, four wins. It’s fair to say that they can be quite pleased with their investment. 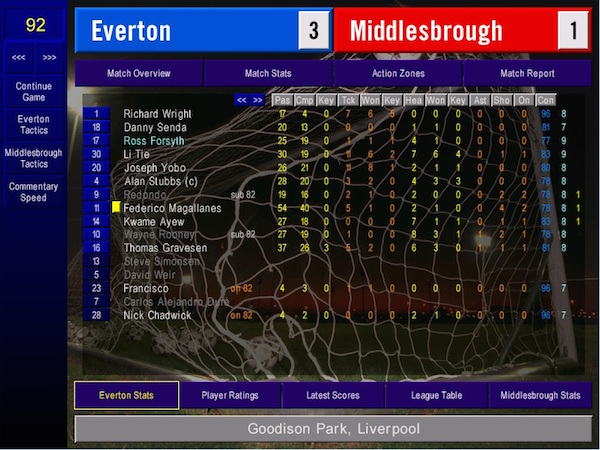 Speaking of investments, the first £1m of the windfall is splashed out on this young man from Portugal. He won’t be a first team regular yet, and he was a bit miffed about that during negotiations, but he’ll receive extra work in training and he’ll come on from the bench to help out Magallanes in the number 10 role. His arrival marks the end of Carlos Dure’s time here. He goes on the list to make some room. Walsall express an immediate interest. 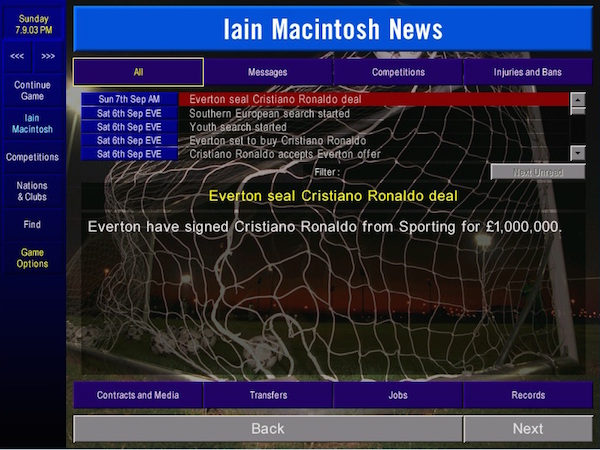 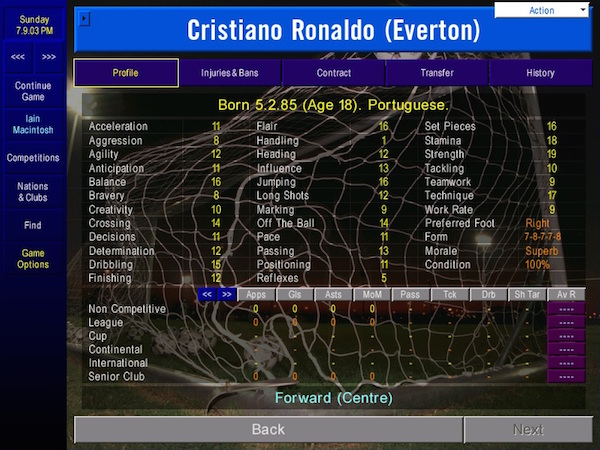 And we’re not the only ones spending money. Manchester United sign Pavel Nedved for nearly £15m. He does, in fairness, look quite good. 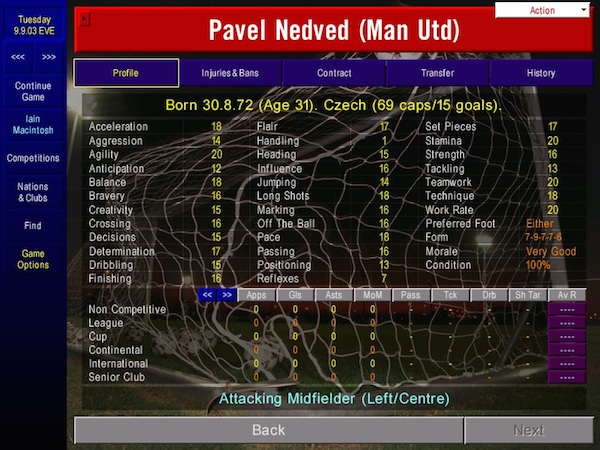 We travel to Highbury next for a fixture that has thus far failed to bring us a single point. But Arsenal are strange this season. They didn’t replace David Seaman and Stuart Taylor is struggling to fill his gloves, so much so that he was replaced by Rami Shabaan in their last match. They lost both of their league games this season, including a 1-4 battering at the hands of Tottenham Hotspur. I think we might actually have a chance. 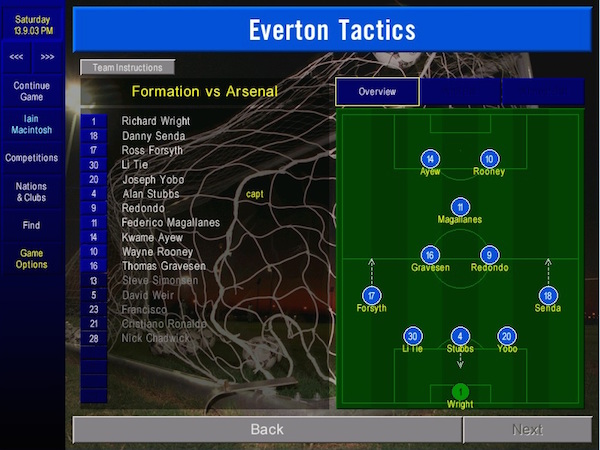 Nope, no chance at all. For all of Arsenal’s problems, they do still have Thierry Henry. We matched them in the first half, then the floodgates opened and we were 3-0 down after an hour. Seeing no sense in wasting the legs of key players, I brought on three subs, including Ronaldo. Naturally, he scored. Defeat at last then, but green shoots of hope at least. 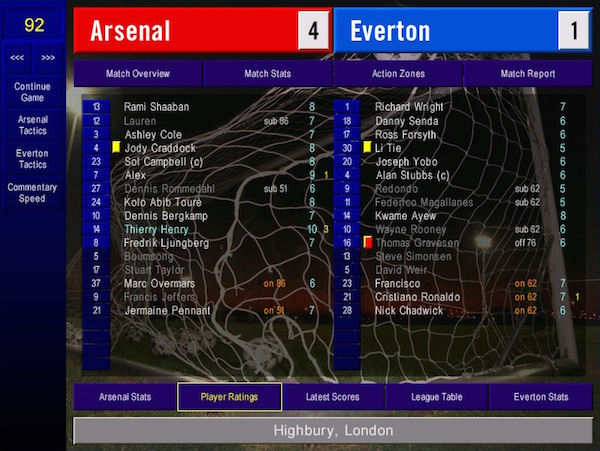 Richard Rufus has arrived for £1.3m. He’s a marvellous defender with so many strengths and he’ll fit right in here, especially as Alan Stubbs and David Weir are starting to decline. His arrival marks the end of Alessandro Pistone’s time here. He goes on the list to make some room. Walsall express an immediate interest and snap him up for £475,000, which isn’t bad considering that his contract expires at the end of the season and that he’s rubbish. 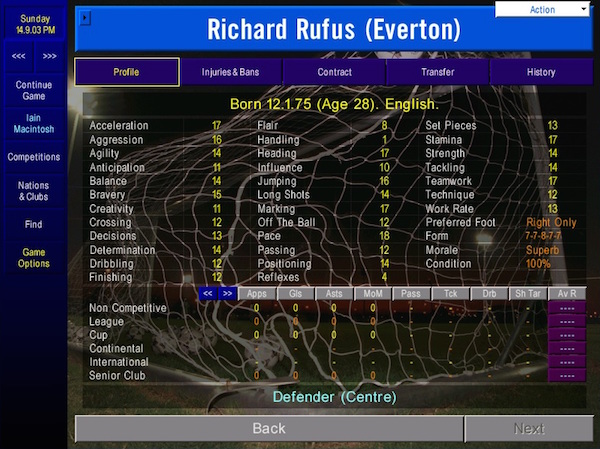 It’s the League Cup, a competition we’ve never had any luck with, but we feel more confident now. Not least because we’re away at Colchester. Colchester are rubbish and even though silverware is the aim, I think I can afford to rotate the team a little and allow the fringe players to take their turn. I do not wish to be proved wrong. 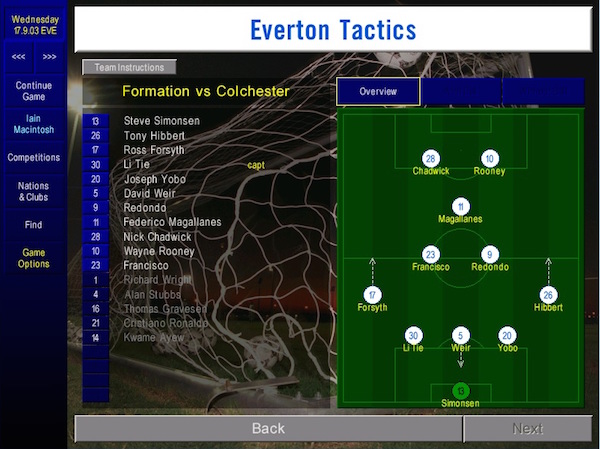 I am not proved wrong, though we do make heavy weather of a pretty poor opponent. It’s still goalless at half-time, but it’s all over by the hour mark thanks to Magallanes and Rooney. That’s my kind of cup tie. No muss, no fuss. 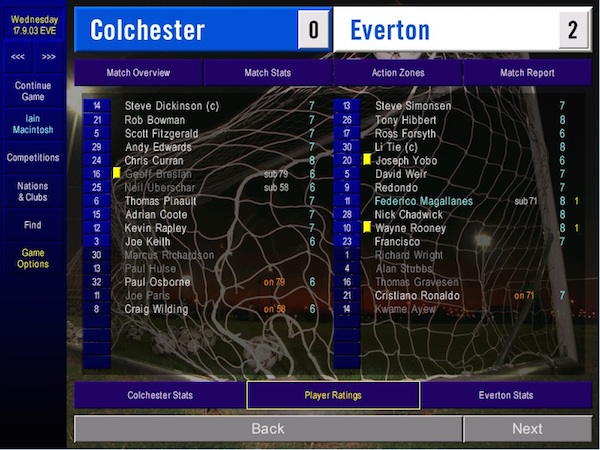 Newcastle are the next to visit our dilapidated home and they present an interesting challenge given that they will match our 3-5-2 formation. Martin O’Neill arrived with much fanfare in the summer of 2002, but he was only able to replicate Sir Bobby Robson’s seventh place finish. He’s spent nearly £40m on the likes of Mark Kerr, Kily Gonzalez, Mario Stanic and Grimsby stopper Danny Coyne, but as yet without anything to show for it. But Newcastle have started the season well, winning ten points from five games. We revert to our strongest side, with Francisco in for a tired Redondo and Rufus coming in for Yobo, who disappointed me against Colchester. 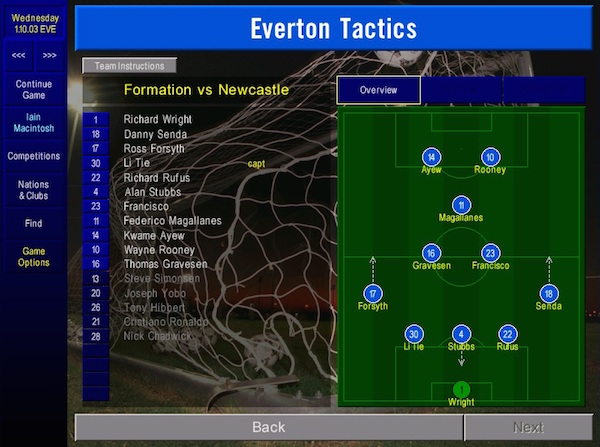 Newcastle come at us like the end of the world, unleashing all imaginable devastation in the form of Alan Shearer and Zissis Vryzas, the one man Scrabble win. Our plans are unravelling and the only surprise when they take the lead in the 44th minute is that it’s taken them so long to score. We can’t track their runner if we match their shape, so I take off our sweeper Alan Stubbs and tell Yobo to charge out of the defence and to give Kily Gonzalez something to worry about. That relieves Magallanes of the marking duties he was clearly shirking and enables him, and then Ronaldo, to get at Newcastle. We equalise and we should win, but it’s a positive result. They’d have snotted us last year. 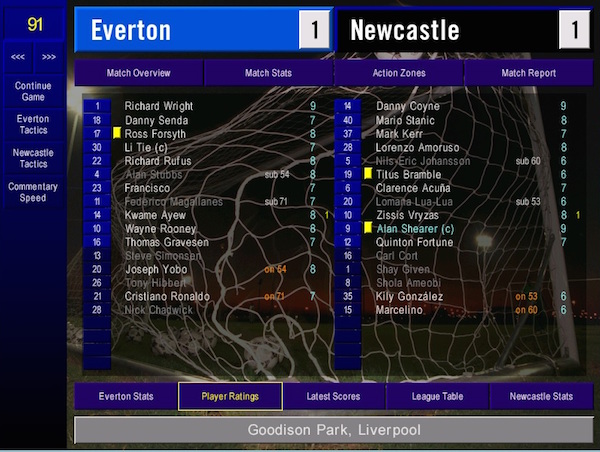 Under the careful stewardship of Peter Ridsdale, Leeds United have established themselves as regulars in the top six and won the UEFA Cup in 2002. They don’t spend much, just £4.7m on Charlie Miller in 2002 and £2m on Gary Teale in 2003, but they don’t need to. They have Harry Kewell, Robbie Fowler, Mark Viduka and Alan Smith. This won’t be easy at all. Just the one change; Redondo returns for the suspended Gravesen. 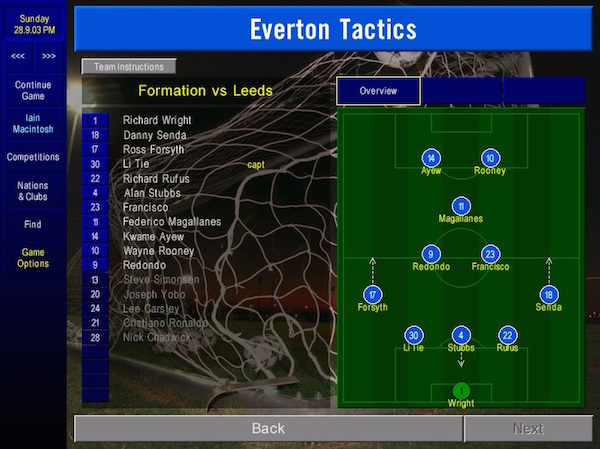 We were good, but not quite good enough. There are still weaknesses in this team, but of course there are. Remember that we banked everything this season on a change of formation that relied upon two young wingbacks with a combined transfer value of £200,000. It’s a wonder that they’ve done so well. But kids don’t play well every time, they need to be allowed their mistakes. We know where to strengthen, at least. But let’s not get downcast. It took Arsenal the better part of an hour to find a way past us. It took Leeds 81 minutes to do the same. We held a good Newcastle to a draw. We would have lost all of those games by mighty margins last season. 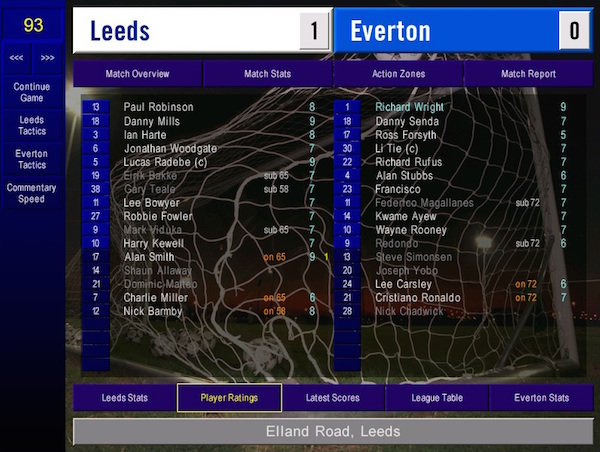 We are on the road to recovery. We need the people behind the scenes to do their bit and rebuild our stadium and our facilities. We need the players to step up, especially the new signings upon whose heavily tattooed shoulders so much rests. We missed our chance to grab the Mike Duffs and Mark Kerrs. We need to scour the world for the best regens we can find so that we can ensure a brighter future for Everton Football Club. The battle for survival has been won. The war, however, still continues. And it won’t end until we win something that shines. 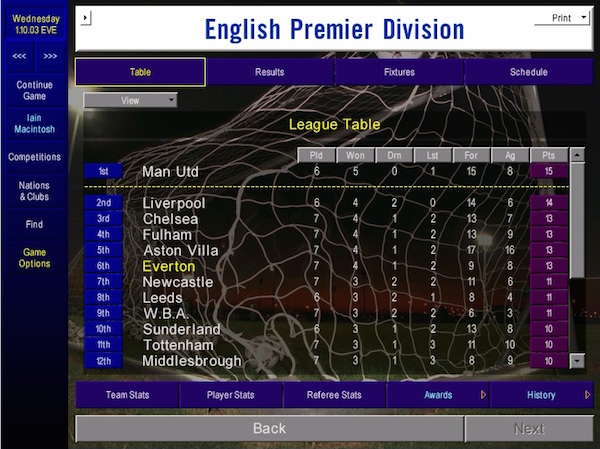 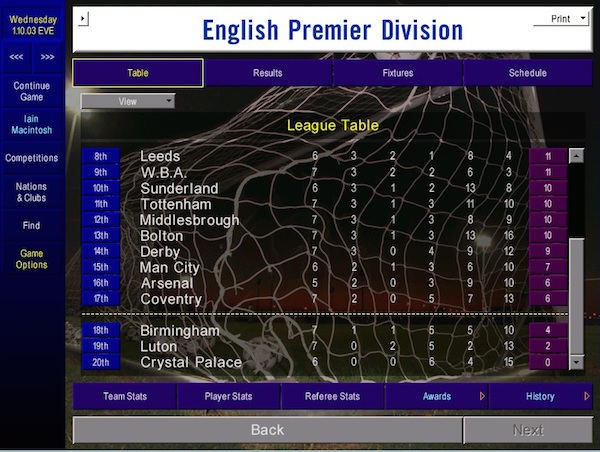