Let’s have some live bands! Let’s have some fireworks! Let’s have balloons and face painting for the kids! Let’s have Big Neville Southall in to cut the ribbon! Let’s give Duncan Ferguson the wrong date for the party. Let’s open Kings Dock Stadium and dance into the future with our hands in the air, for we just do not care. We have everything we need now! HUZZAH! Wait? What? 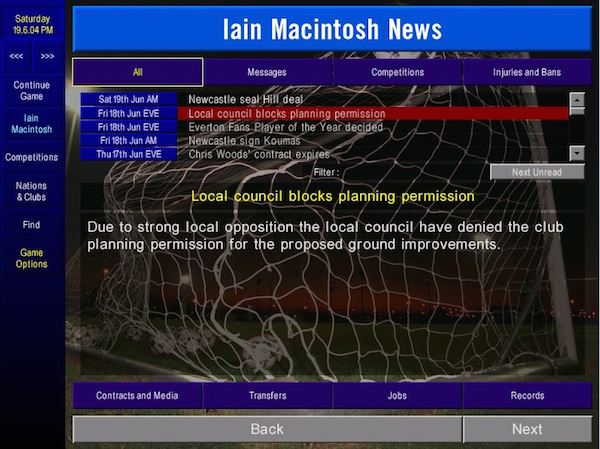 Immediately, I run to the General Info page. It’s still there. The stadium is still there. My God, my heart almost stopped beating. But I’m confused. What have these mouth-breathing, curtain-twitching, Daily Express-reading not-in-my-back-yard bastards objected to? It must be my request for new facilities. It must be the training ground and youth academy that I wanted. I was under the impression that the board had turned this down, so I don’t think I’ve really lost anything. But I still need a stiff drink to get my heart rate down again. 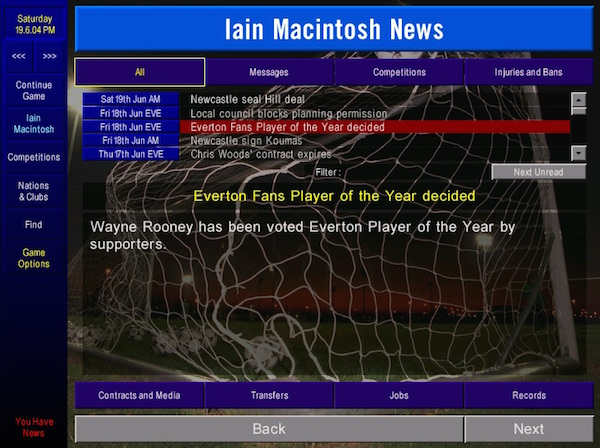 Wayne Rooney is the winners of the Fans’ Player of the Year Award and it’s a good choice. He’s a local boy, is Wayne. Once a Blue, always a Blue. They respect that. They know he’d never let them down. Let’s hope he justifies their faith. After all, why would he leave? I would expect us to make another push for the top six and a domestic cup this year. The board aren’t so sure, though this is no bad thing. Low expectations can be easily vaulted. 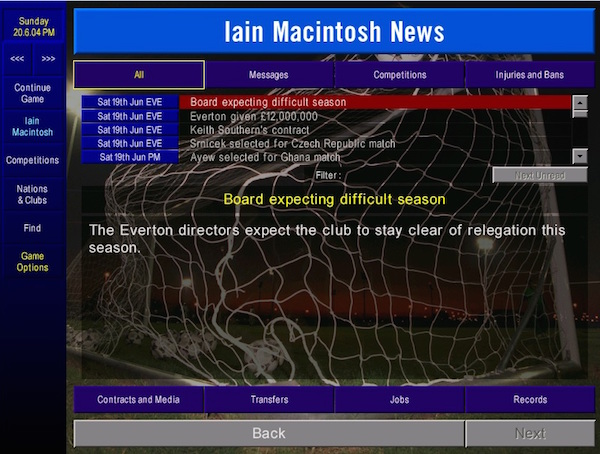 But look at this, we’re financially ‘secure’ for the first time ever. We have £12m in TV money to go with the increased season ticket sales and we have no debt whatsoever. That means there is currently £14m to spend on new players. I have absolutely no idea what I’m going to do with that. It’s incomprehensible to me that we could be in such a comfortable position. Serious scouting is required. 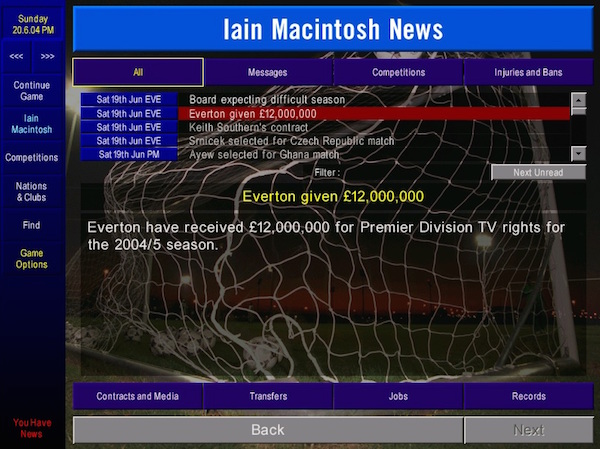 In the meantime, Trevor Francis’ run in the European Championships continues apace. Ireland were tricky opposition, but an extra time goal from Kevin Phillips has sent England to the semi-finals and a meeting with Croatia. He’ll be knighted if he pulls this off, but he’ll have to do it without Robbie Fowler and Michael Owen, they’re both injured. The nation sits, buttocks tensed, to watch it unfold. 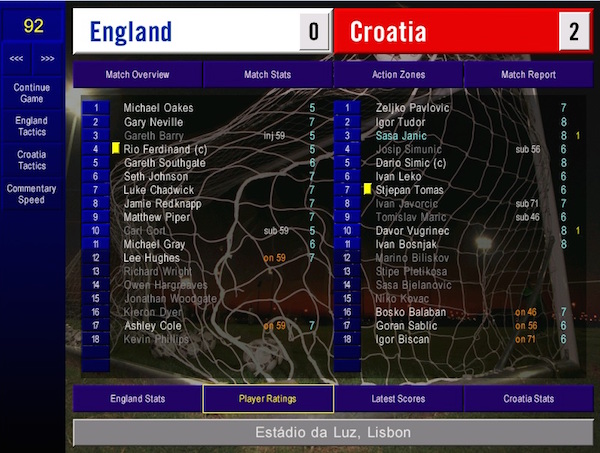 Oh, Trevor. I told you that you should have played Richard Wright in goal. And Carl Cort is no Michael Owen. Hard luck. But on with the show. An actual hour of my time is spent sweeping through the game, looking for players who might fancy showing off their skills in a brand new stadium. Oh, it’s wonderful when you’ve got some money. And then, having shortlisted dozens of players, I chance upon one young man who is very unhappy with his lot in Holland. Now…I realise that I already have some very good players up front. But if I can get him, wouldn’t it be worth adding this guy to the team? 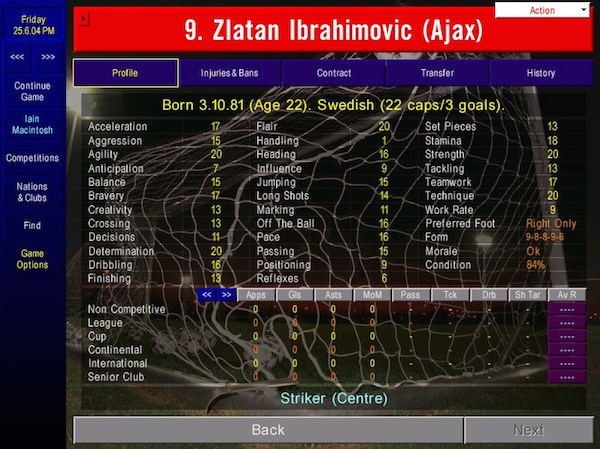 We accept an invite from PSV to take part in a friendly tournament over the summer, but I need a big game to open up the new stadium. And there’s really only one team to ask. Sadly, Tranmere Rovers are busy, so I go for the next best option. 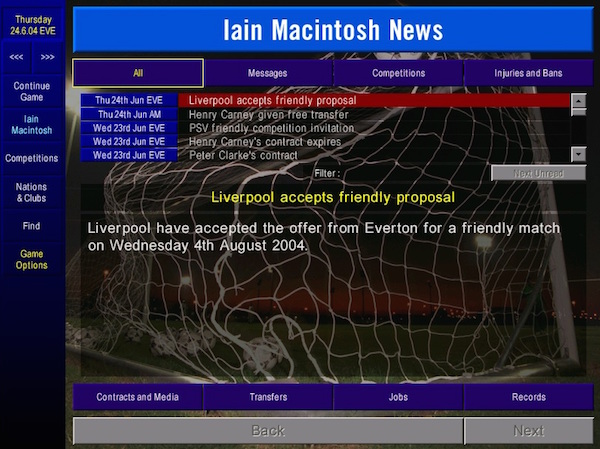 In something of an about-turn for the wider narrative of international football, Germany win Euro 2004 with a comfortable victory over Croatia. Logically, this should mean that there will be no grand unifying youth development work and no new academies. So there’s something for Francis to cling to as he returns home to a disappointed nation. He’s got a real chance of glory in 2014. Elsewhere, France, Spain and Portugal all sack their managers. I’m not interested. Though I daresay, neither are they. 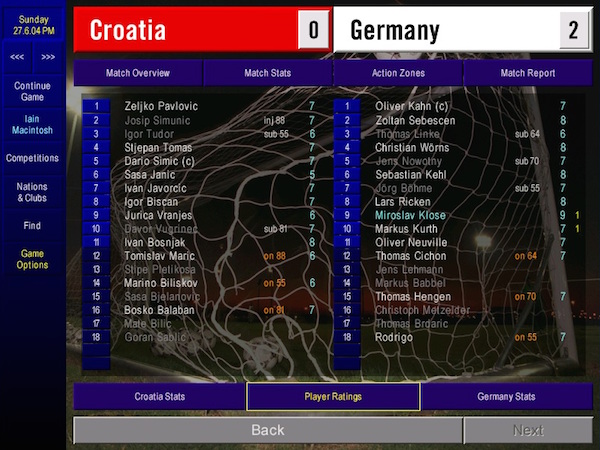 Business is slow. I’m still firing in bids for players like Danny Shittu and Gary Breen, but I’m not willing to break the bank, no matter how glamorous they are. I miss out on Clarke Carlisle because I won’t go above £2.6m. I’m not sure what’s happened in the world of football, but everyone is bidding for everyone. It’s a real dogfight. Fortunately, we’ve got Cherno Samba secured already and he arrives at the training ground for pre-season training. Oh, what a time it is to be alive. 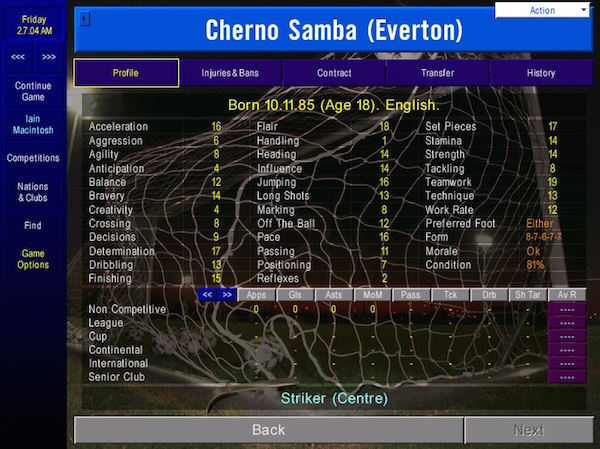 Bids continue to fly back and forth. Tottenham blow me out of the water with a £10m bid for Scott Parker. I haven’t even offered that much for Zlatan. Yet. There are negotiations in progress for eight signings, but the only solid development is the work permit-related collapse of the bid for Turkish B international Avci Koray. No matter. He was only ever going to be a free, low wage back-up anyway. We have bigger fish to fry and bigger rods with which to catch them. Speaking of which, I need to give Tony Hibbert a hug and let him know that whatever happens, he’ll always have a contract here. And he’ll have a new friend. A new football friend. 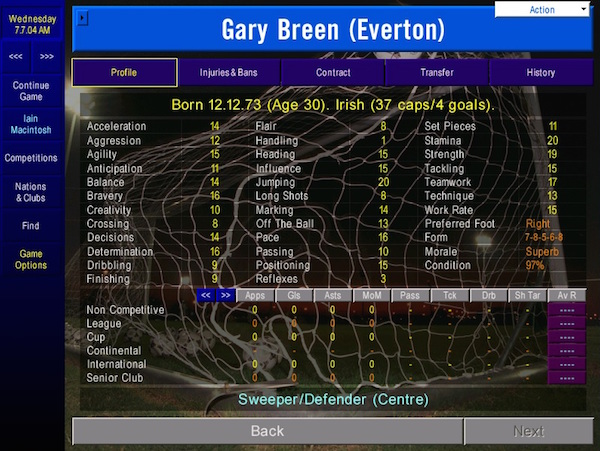 It’s off to Holland we go now, for a four team mini-league that seems to be scheduled so tightly that we’ll all be playing at walking pace by the second game. There are injuries and a few players are lacking fitness, but we’ll do what we can and see what happens. 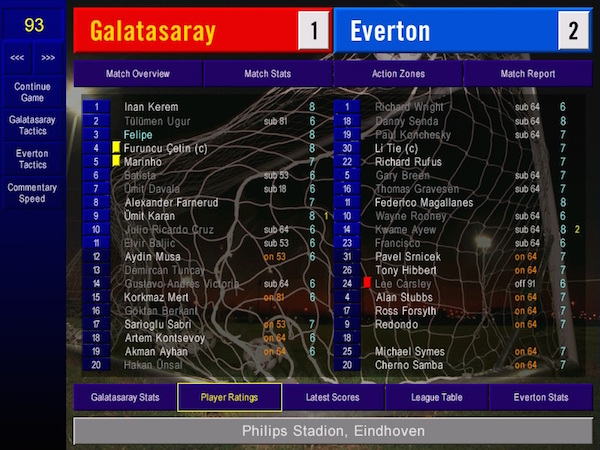 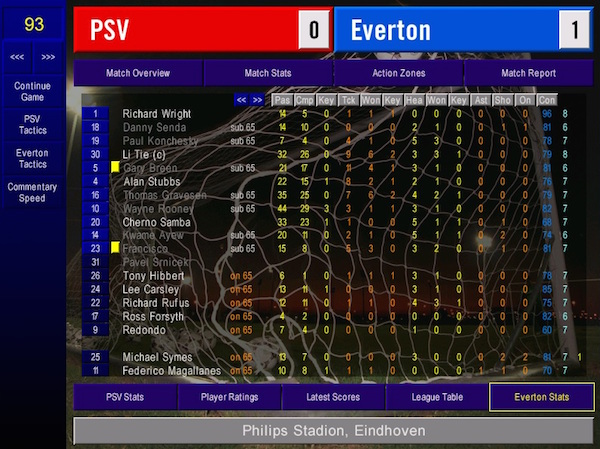 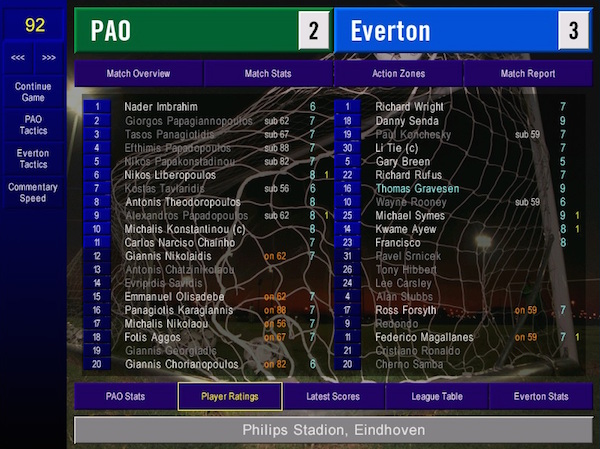 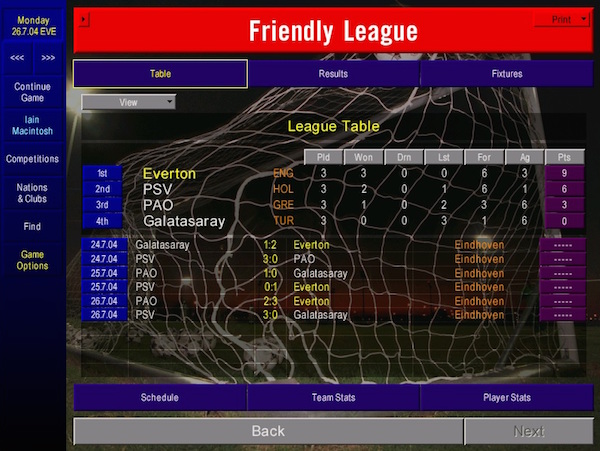 Well, there you go. There’s your trophy. I’m off.

No? Okay, it was worth a try. We played reasonably well in every game, but it was a tough tournament for the new boys. Gary Breen put down some really poor performances and Cherno Samba never really got going. Michael Symes and Kwame Ayew did though and Wayne Rooney performed admirably in the hole, which isn’t really where I want him, but he was helping out. We’re in good spirits. And we’ve made an interesting new signing…

I know, I know. I KNOW. I don’t really need him. But, come on! It’s Zlatan. Yeah, we could have spent that money elsewhere, like the centre of the park where we’re really quite average. But if you know you can sign him for £10m, if you know that you can say to the world, we’ve got Rooney, Ronaldo and Ibrahimovic, I mean really…what would you do? Young Symes is upset at the competition for places and honestly, I can’t say that I blame him. He’s properly fucked now, the poor bastard. 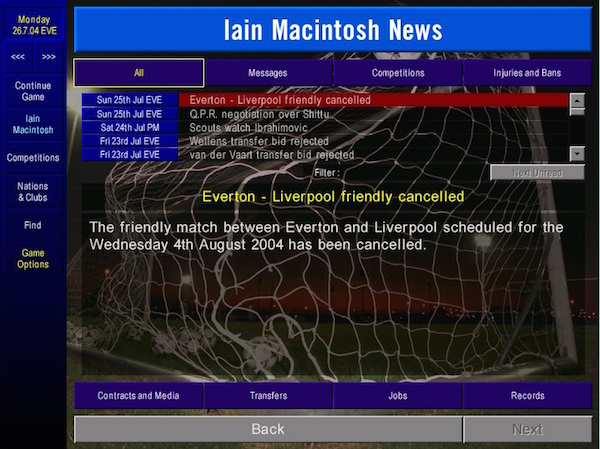 Sadly, we won’t get to show Zlatan off against Liverpool because they cancelled the friendly at the last moment. I wouldn’t expect anything less from that mob. They’ve got stacks of money, but you can’t buy class. I invite Roma instead and I would give my neighbours a very old fashioned look, but they’re not my neighbours now because we live by the docks where all the cool people hang out. 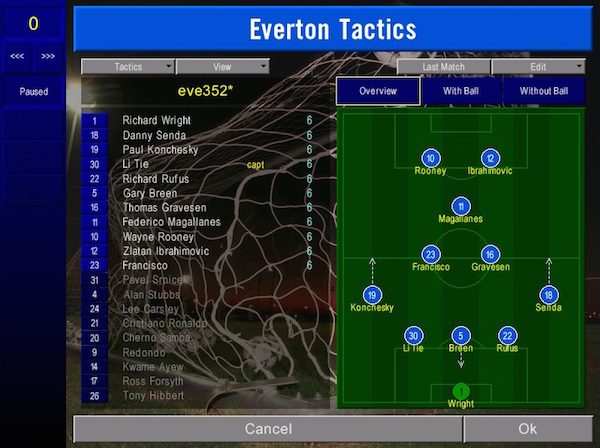 Well, I have to say, I’m a little disappointed. There’s nothing wrong with the opposition. Roma are one of the best teams in the game. There’s certainly nothing wrong with my team, this is my strongest line-up. And we do well too. We match them punch for punch. It’s just a shame that only seven fucking thousand people turned up to watch it. Our first night in our new stadium and only seven thousand come through the turnstiles? There’d better have been something AMAZING on television that night. Ungrateful bastards. Honestly, you wonder why you bother sometimes. 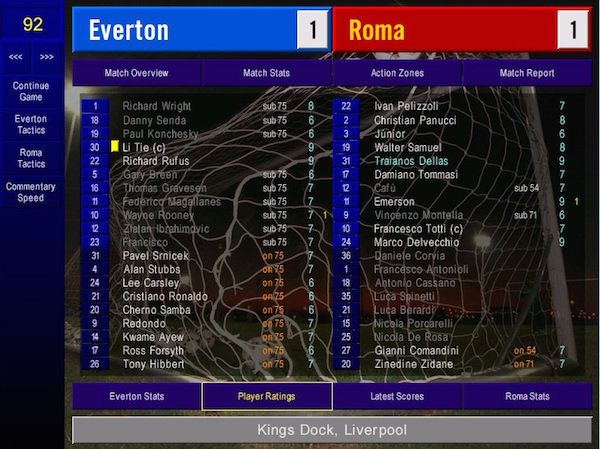