@thesetpieces @iainmacintosh Don't get too cocky with that ice cream Macintosh. And don't fuck this up like every other season.

@thesetpieces @iainmacintosh Macintosh In!!! Flavour of the month. Now don't fuck it up by over tinkering. I know you've been in Leicester..

It’s a busy month, October, especially with our European commitments. We’ve got a lot of cover this year, but we’ve got a lot of injuries too. We’ll have to tread carefully. And the fixtures aren’t easy ones either. First up are Tottenham. They usually play with a deep lying forward and that, allied to the fact that we’re in such great form, is enough to convince me to stick with the same formation, using a defensive midfielder to cancel them out.  But we can’t stick with all of the same players. Mauro Navas is tired, so Jon Harley will come in. Wayne Rooney is tired too, but the injury crisis means that we can’t afford to drop him. He’ll have to push on through. Spurs will be title challengers again this year, so this is a huge test. 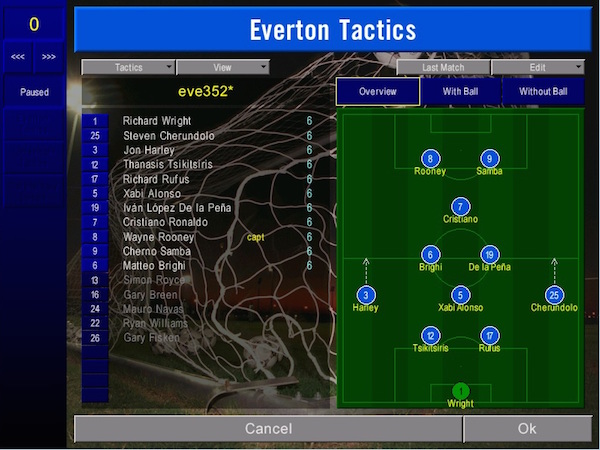 Spurs spring a surprise by switching to a 4-4-2 and playing defensive football. That’s not like them. It worries me, but I stick with the same plan and naturally, despite only having two shots, they go in at half time with a one goal lead, thanks to Patrick Berger. We’re pretty toothless, it has to be said. Matteo Brighi is having a stinker and Rooney is puffing out of his arse, so it’s time for major changes. Ryan Williams and Navas come on as wingers in a 4-4-2 and Ronaldo moves up front. Within six minutes, we’re level. Just before the hour, we’re leading. I really, really should have switched to 4-4-2 earlier. It’s a close run thing, Spurs have their chances, but it’s our turn to switch to defensive football, get men behind the ball and we hold out for a three massive points. 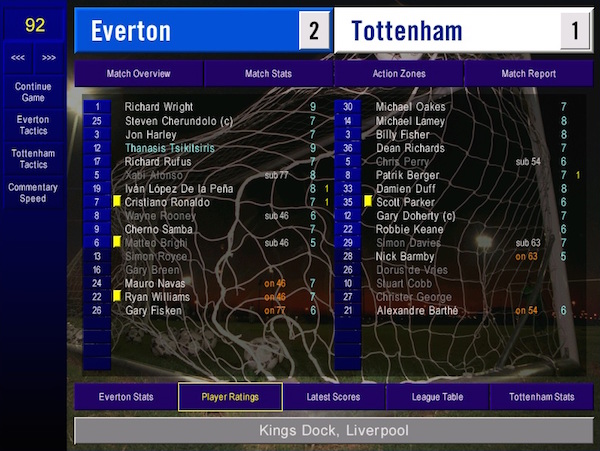 A trip to newly promoted Ipswich is up next and they’ve started well. They play a simple 4-4-2 and, in accordance with the season’s policies, that means we do too. Injuries and fatigue influence my thinking. Danny Senda will allow the magnificent Steven Cherundolo to take a much needed break. Gary Breen will replace the uninspiring Richard Rufus, Ronaldo will play up front with Cherno Samba and we’ll go with the wingers, Jon ‘Topper’ Harley and Ryan Williams. 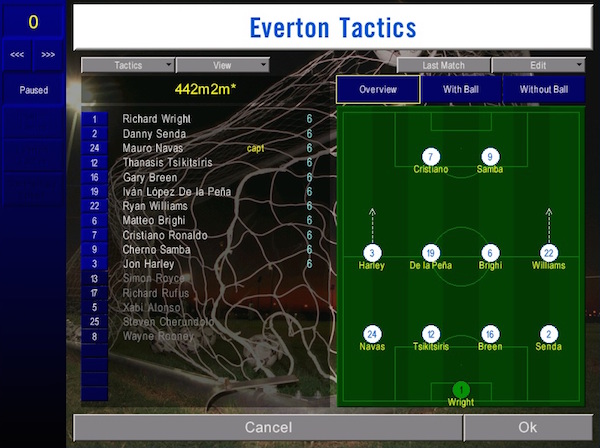 The best and the worst of Everton is in evidence once again. It’s an open start to the game, Samba scores first, but Ipswich are creating lots of chances through Martin Reuser. I order Senda to cease his forward runs and to concentrate only on removing the Dutchman from the equation. For a time, it works. Ronaldo adds a second before the break and when Erik Edman is dismissed before the hour mark, the game looks won. But from nowhere, Reuser goes on an incredible solo run and spanks one past Richard Wright. A minute later, Marcus Bent, a lone striker now being marked by both Breen and Tsikitsiris, does exactly the same thing. 2-2. It’s time for a change. We switch back to the mad-arsed formation, make three changes and promptly blow the Tractor Boys away. Rooney scores the winner. That was a little closer than it needed to be. 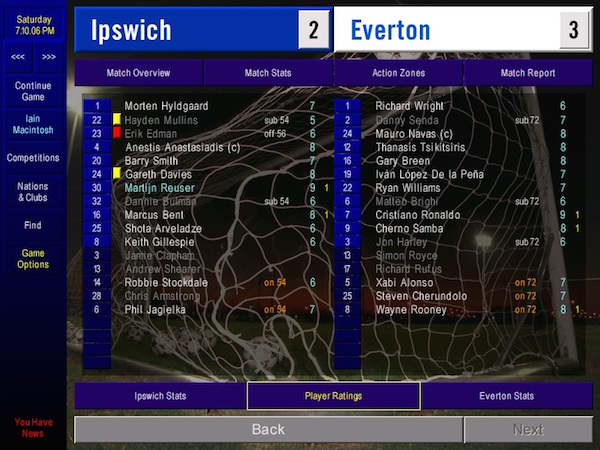 Thankfully, there is now a twelve day rest period, though this is mainly because some bright spark has given us a Monday night game at Derby before our UEFA Cup tie away against BATE Borisov on the Thursday. Thanks for that, chaps. Still, we can get some players back to full fitness and get one new face in. 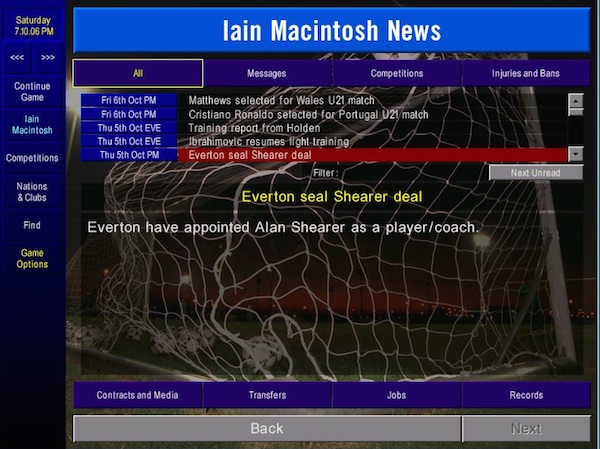 Behold, the recently released Alan Shearer. Our secret weapon for a campaign on four fronts. He brings a number of benefits. Firstly, he is Alan Shearer. Secondly, he’ll be on the coaching staff. Finally, he’ll end Brighi’s incessant bleating about a perceived lack of squad depth. You do your job, sunbeam. I’ll do mine. 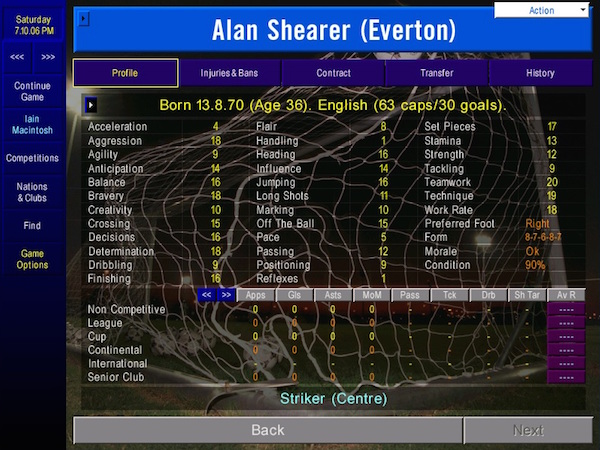 But he won’t be playing against Derby. He’ll need a bit of time to regain match fitness first. We’ll go with the form players for this one, matching their 4-4-2 formation and if we’re lucky enough to get ourselves ahead, maybe we can withdraw players in the second half to keep them fit for Thursday. One thing at a time. 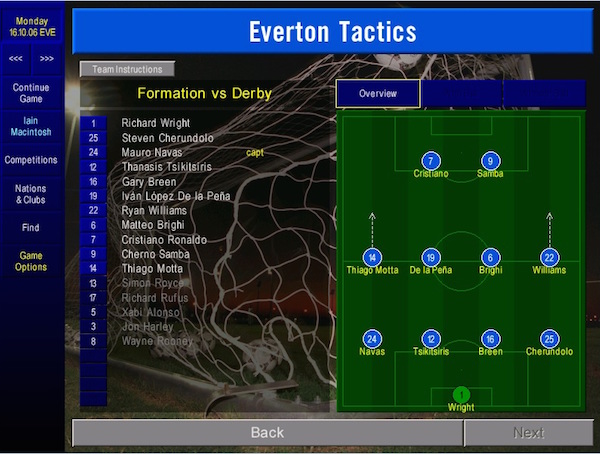 Yes, well…clearly it was a wise decision not to rest any players. Derby were not particularly good and the first half was one way traffic. We hit the post, we hit the crossbar, we had the ball cleared off the line and on the odd occasion that we didn’t do any of those things, we couldn’t beat Mart Poom. There was a sort of crippling inevitability to Malcolm Christie’s 72nd minute goal, coming as it did, completely against the run of play. Cut to: Triple substitution, switch to attacking football and a late equaliser from Ronaldo. We really do make this so much harder than it needs to be. 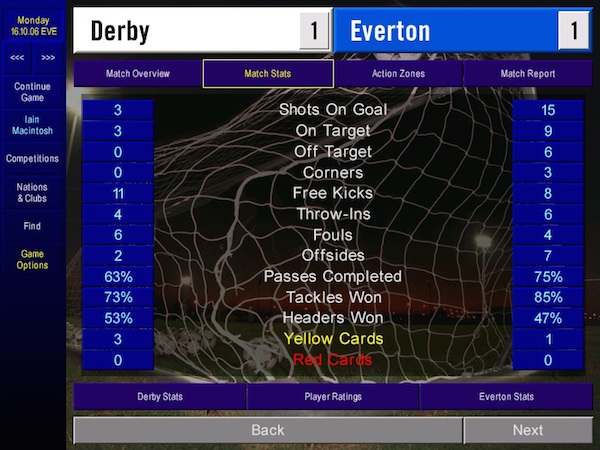 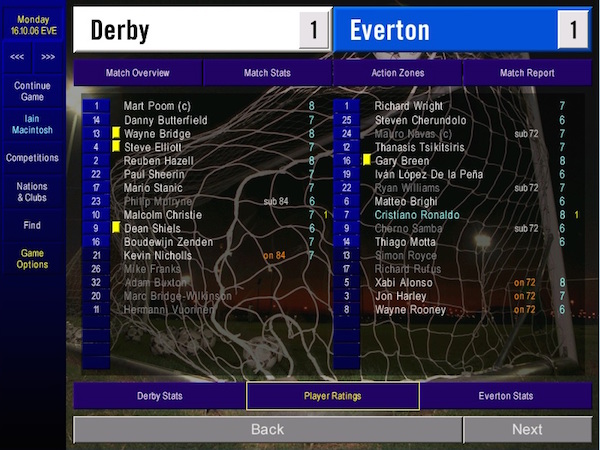 In the meantime, Liverpool have spent 30% more money than we’ve ever spent on a player on Anthony Le Tallec. And you wonder why they irritate me. 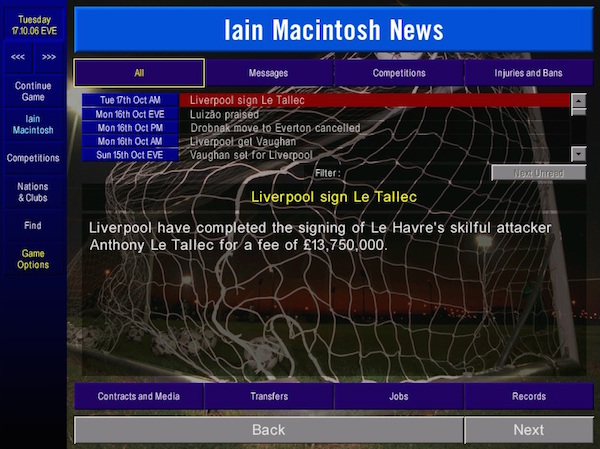 But onwards to Europe and our trip to Belarus. Belarus, of course, no longer feels the sun, but it’s under the skin of everyone. Belarus, forgotten by the blind, that is until next time. We return to the mad-arsed formation for this one, but there’s no place for Rooney. His morale is very low and so there’s a chance for Zlatan to prove me wrong. As it stands, he’s the man I’ll be selling pour encourager les autres. I wish that Gabriel Milito was fit though. We do miss him. 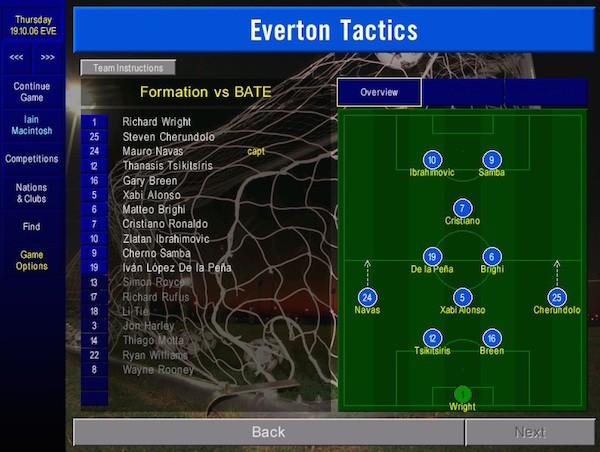 We’d have taken that before the start of the game. A good, attacking performance and two away goals, but it’s the same old story. We make other people’s goalkeepers look good. An early goal from Mauro Navas is the least we deserve and they’re lucky to get in at half time with nil. But as the end of the game approaches, two quickfire goals leave us scratching our heads once again. Fortunately, Zlatan actually does a goal in the last minute, but by thunder, you know the answer to this. I know the answer to this. There are cats who know the answer to this. We need a reliable goal muncher. This is getting silly now. It’s just a bit of a shame that we haven’t got any money really. 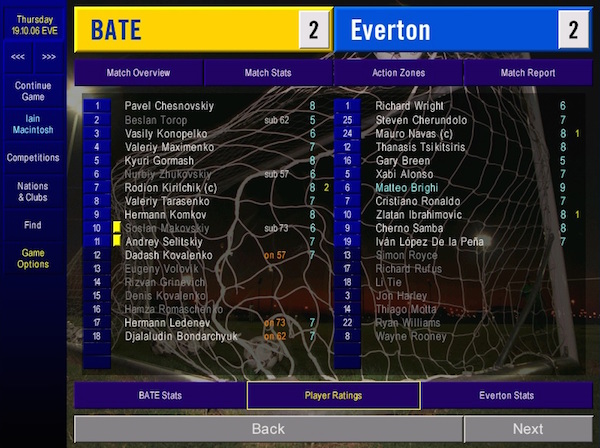 I know that Shearer would like to be my goal muncher, especially as we’ve got Sunderland next, but it’s still too early. He only managed 70 minutes for the stiffs, so he’s very much here as an option for the winter months. Instead, we’ll see if we can cheer up Rooney. It’s the last game without Milito, he’s not quite fit enough for this. Can Zlatan build on that goal in Eastern Europe though? 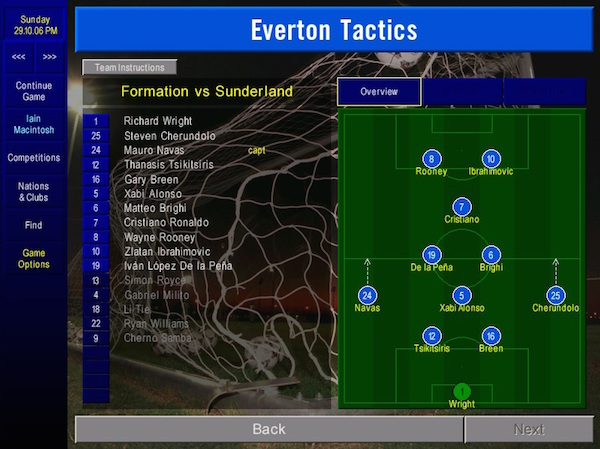 Bloody hell, he can. There’s one for him and two from the midfield in what was actually quite a stress-free afternoon at the Kings Dock. Good performances all round. They certainly had their chances, Sunderland, but found Wright in almost unbeatable form. If only he could be like that all of the time, we might have a chance. That said, perhaps we *do* have a chance. Ten games into the league campaign and we’re top of the table and still unbeaten. If we can get a result away at Sheffield Wednesday, we’ll be looking pretty decent for November. But I’ve been reliant on a result against Sheffield Wednesday before and that did not turn out well. Back to the training ground. gentlemen. We’ve barely started yet. 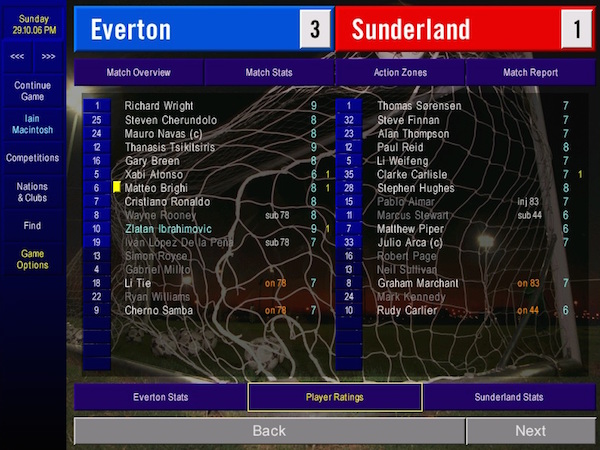 And now, for the first time in the history of this saga, we have a selection issue. The League Cup tie away at Newcastle is our 12th game in seven weeks and that trip to Sheffield will follow in three days. Half of our first choice team is down in the 80% fitness bracket, or the red zone as Arsene Wenger likes to call it. If we play them at St James Park, there’s a strong chance that we’ll pick up injuries. There’s an even stronger chance that we’ll be exhausted for the league game. The aim of the game is to win silverware though, so I can’t just write the competition off. It really would have been nice to have Southend at home, or something like that, but Everton don’t get easy draws, so we’ll have to make the best of it. Hopefully, this team will be strong enough. Samba hasn’t scored in a while, Motta isn’t really suited to the centre of midfield and Shearer, if you’ll forgive me for drawing on the curse of the ex-player, is on the bench. 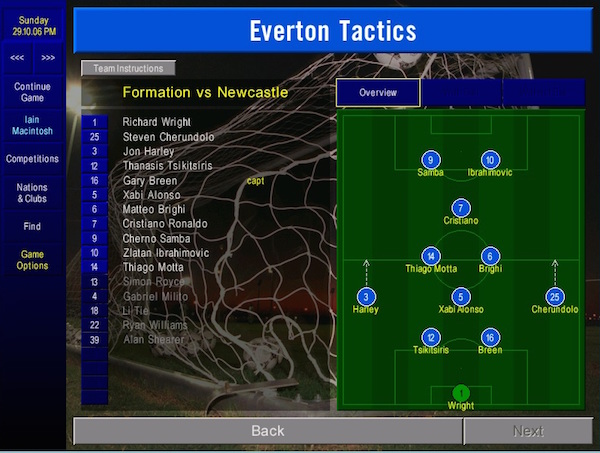 It’s just possible that I worried a little too much about this one. Newcastle were in exactly the same position and chose to make wholesale changes. The game was over inside an hour, allowing us to make three changes purely in the interests of fitness. A goal for Samba, another goal for Ronaldo and one for Harley too. Shearer did well enough, but didn’t manage to get a shot off at all sadly. But still, we’re through and we’re unharmed, that’s what counts. 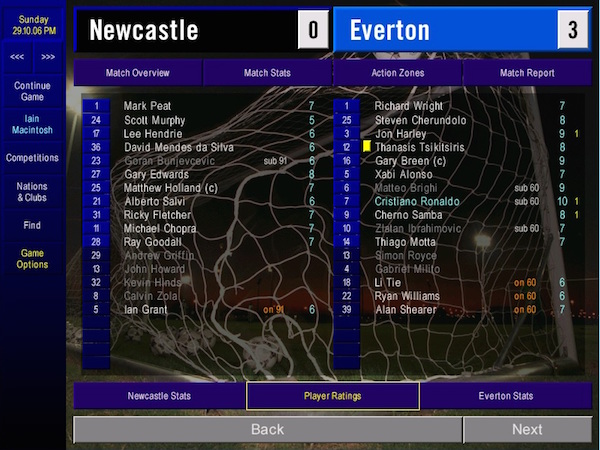 Sheffield Wednesday play a very odd formation. Three at the back, a defensive midfielder, flying full backs and two up front. It’s not quite a natural fit for our mad-arsed formation, but that’s as close as we can get to matching them up without making a mess of things. And we welcome Milito back to the side at last. His presence should finally mean an end to the trickle of goals that we’ve been leaking all season. 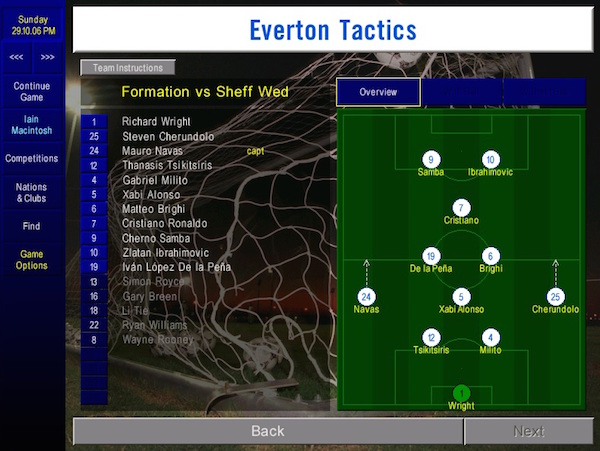 For fucks’s sake. We started brightly as well. Then they scored with their first two attacks. A penalty for Zlatan, coming after two more had been turned down and Wayne Quinn had avoided a straight red for a vicious foul, brought us back into it, but Wednesday were 3-1 up within minutes. A penalty of their own in injury time was just taking the piss. We didn’t deserve that. Obviously, we made more chances. Obviously, we put more chances on target. Obviously, their goalkeeper was amazing. Sigh.

I’ve come to learn something in recent months. Managing Everton is like always having slightly fewer buckets than you’ve got leaks in the roof. 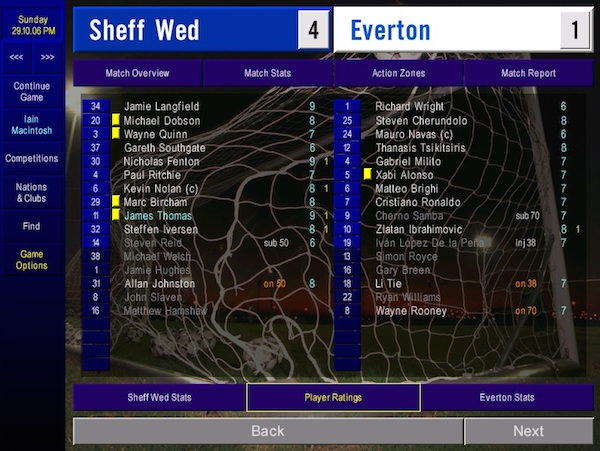 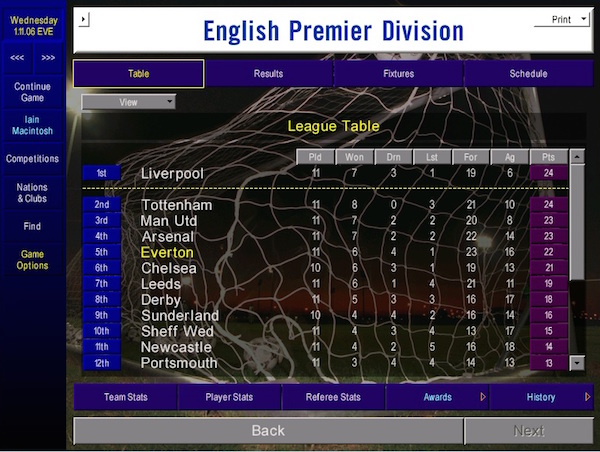 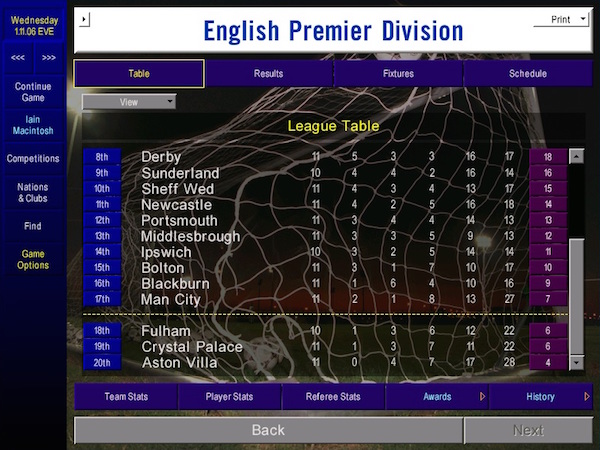