Another good month for Everton, and I really feel as if we’ve changed the mindset of the supporters. There used to be such a negative vibe around the Kings Dock, but it feels as if we’re all pulling together now. The supporters do their job; they support. They can see what we’re trying to do here and they’re willing to wait for the results. It just feels, I don’t know…like we’re a proper team.

16 goals conceded in just the 11 games & @iainmacintosh keeps chirping on about his strikers not doing the business https://t.co/A4Rkoi4VSM

@thesetpieces @iainmacintosh I've seen this movie before. This is when you go on a losing streak.

@iainmacintosh your dedication to making 442/Ryan Williams work is embarrassing. I'd mutually consent the sh*t out of you for that alone…

We outplayed BATE Borisov in the first leg, but still only came away with a 2-2 draw. However, I still think the usual mad-arsed formation is the one to go with here. I don’t want to go all expected goals on you, but I expect some goals. That’s how it works, right? Ivan de la Pena is injured, so Thiago Motta will play in the centre of midfield even though he’s not really very good there. 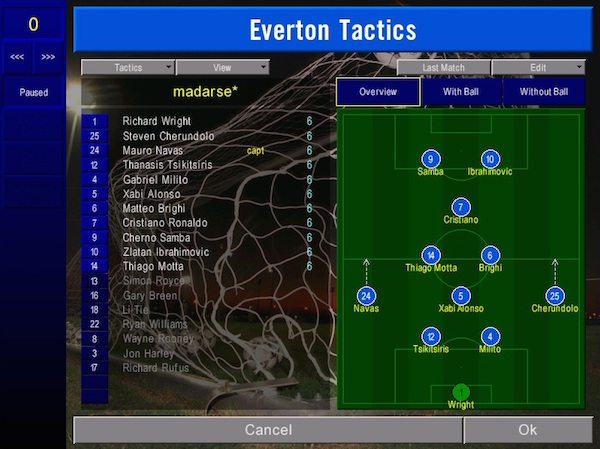 Well, that was pleasing. A barnstorming performance, goals from two of our three strikers and two assists for Zlatan. Steven Cherundolo continues to be the best £1.9m anyone has ever spent and Richard Wright didn’t mess up. Speaking of which, I’ve identified two 24-year-old goalkeepers, both in the region of £4m. When I actually have £4m, I may yet make a move for one of Petr Cech or Pepe Reina. Or possibly Stipe Pletikosa. He’s quite good too. 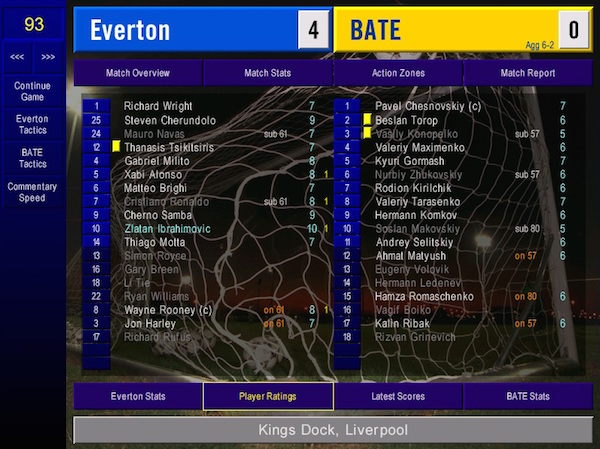 And so on to Portsmouth. Now, I’ve had a plan this season to match up on weaker teams who play 4-4-2, safe in the knowledge that we should be able to neutralise and then destroy them. But I’m not going to do that today. I’m going to stick with the mad-arse and try to blow Pompey away quickly. I’m also going to give Li Tie a try in the middle, as Thiago Motta is dreadful if he’s not on the wing. Zlatan is exhausted, so he gets a rest and Alan Shearer will be on the bench after he scored for the reserves in midweek. 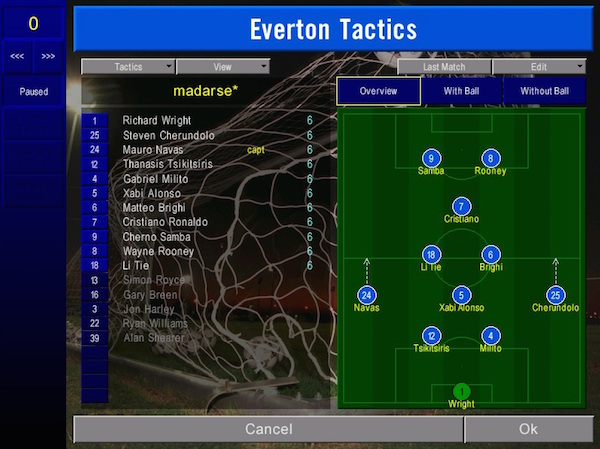 Another very satisfying game and our second clean sheet on the bounce, An early strike from Xabi Alonso, his third of the season, and a long range effort from Li Tie mean a comfortable afternoon for the boys in blue, right up until the moment that Alonso is withdrawn with an injury. Without any midfielders, the switch to 4-4-2 is necessitated, but it brings a third goal from Wayne Rooney and we see the game out in style. The only downside was 17 minutes for Shearer that brought not a single shot, nor even a header. But I’m sure he’ll come good. 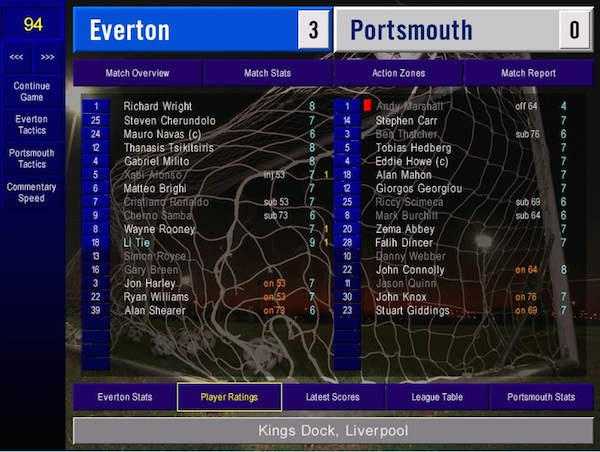 We’re have no luck with cup draws this season. Porto in the first round of the UEFA Cup, Newcastle away in the third round of the League Cup and now Sunderland away in the fourth round. Just once, it would be nice to play someone really, really shit. With Alonso and De la Peña now crocked, it means a return to first team action for £700,000 signing Gary Fisken. So hopes aren’t exactly high here. 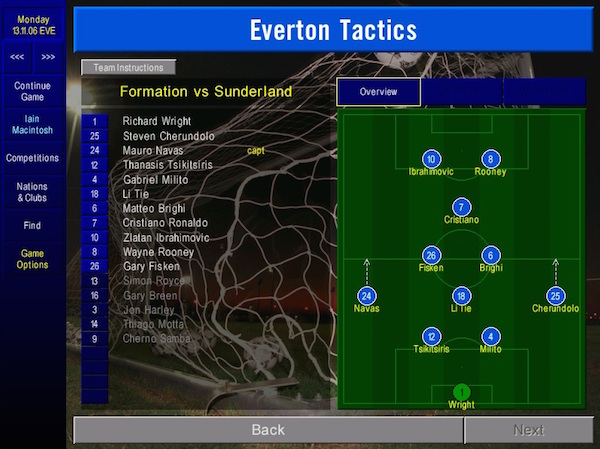 It’s a good game, for the neutrals at least. Matteo Brighi hits his fifth of the season to give us the lead, Matthew Piper quickly equalises. Both goalkeepers are on top form and for all the goalmouth action, neither of us can take the lead. In a season so packed with fixtures, we could have done without extra time and, given that I don’t think we’ve ever won a penalty shoot-out, we could have done without those as well. Zlatan takes first and misses, but so does Steve Finnan for Sunderland, and so too does Pablo Aimar. When Graham Marchant, who started this saga at Garforth, missed as well, we’re celebrating once again. It’s a strange feeling and one with which I’m not entirely comfortable. 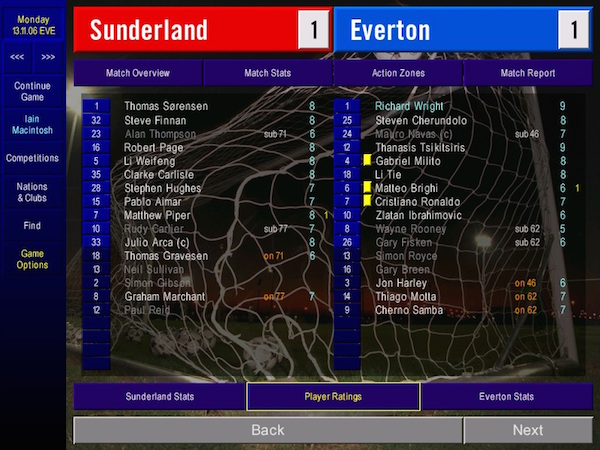 I don’t want to seem like a bit of a whinge-bag, but I do rather resent the Premier League’s decision to move my trip to Old Trafford and have it clash with a load of U21 internationals. I’m up against the champions in what you’d have to say is quite an important game of football, and I have to go without my top scorer Ronaldo and young Samba too. It’s a chance for Thiago Motta to impress in the number 10 role, I suppose, but that’s not much of a positive really. 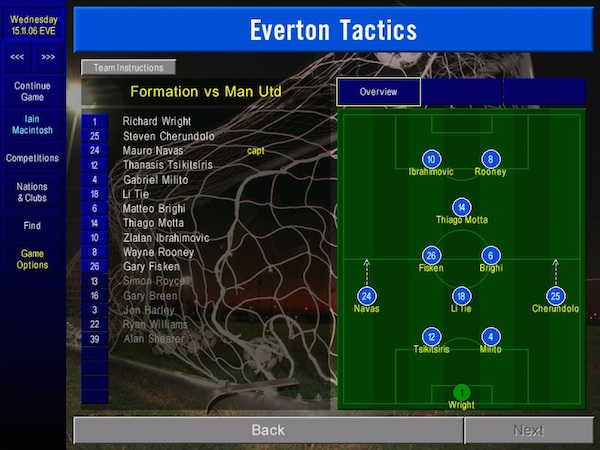 On balance, I’ll take that, though it says a lot about the incredible progress we’ve made as a football club that a draw at Old Trafford feels slightly disappointing. Zlatan opened the scoring, his fifth of the campaign and United struggled to respond. But we lost Brighi to an injury and that left us without a single first-choice midfielder. We were never going to hold out after all that. I’ll take the 1-1. 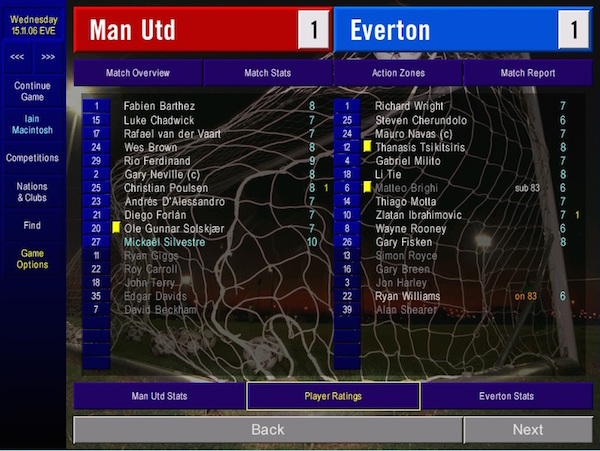 Ronaldo returns for our meeting with Fulham, which I’m looking forward to because Fulham are having a tough season. We stick to the same formation, because it’s working just fine against every sort of football team, and there are no dramatic changes in personnel. We’ve found a bit of a groove now, an ability to just play well all the time. Let’s hope we can keep it going. 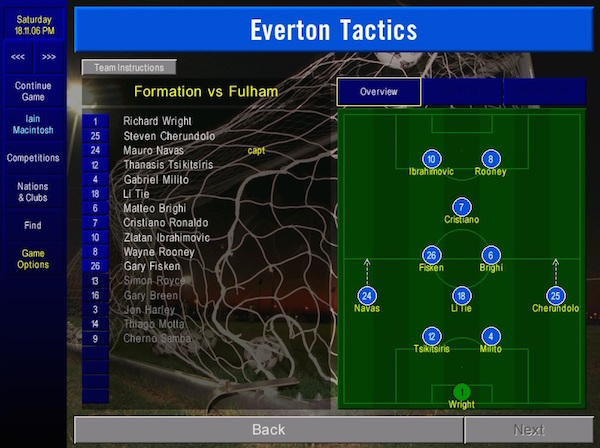 Yes, I think we all saw that coming. We made an iffy start, then took over and then Ronaldo decided to push Alan Goma in the chest and was sent off by Gerald Ashby after just 28 minutes. Not wanting to be cowed by the likes of Fulham, I simply switched to direct football to bypass the gap we’d left ourselves behind the strikers and hoped that we could carry on regardless. Andrejs Stolcers opened the scoring three minutes later. After that, what can you do but attack? We pounded Steve Harper’s goal, but Fulham caught us twice on the break in the last 15 minutes. Brighi’s last minute strike did not improve my mood. Thanks, Cristiano. Thanks a lot. 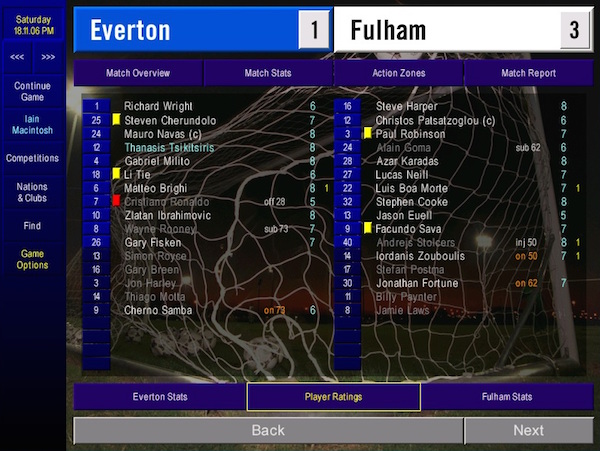 Our UEFA Cup run takes us to Lens now, currently 8th in the French league and a team that pays a very English 4-4-2. I’m still missing a couple of players, but I think there’s enough in the tanks to get the job done here, provided that we can shake off the Fulham hangover 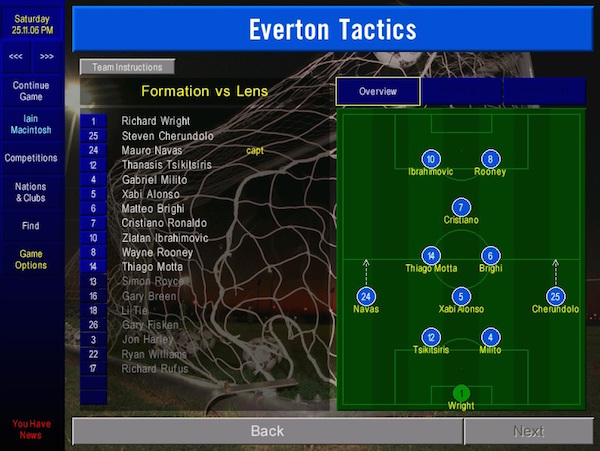 Oh my. Lens score after six minutes, then double their lead after fifteen. It’s a nightmare start, but it’s about to go a lot more wrong. Mauro Navas, my captain, one of my most trusted players, spits in the face of Youri Djorkaeff and is sent off eight minutes before half time. For the second game in a row, we’re down to ten men before the break. There’s nothing we can do but hold out and hope to take a two-goal deficit back to Merseyside. But on the hour, they go 3-0 up. Thank heavens for Zlatan, and there’s something I didn’t think I’d be saying, who scores what might be a crucial away goal in the closing stages. What a mess. I fine Navas two weeks wages and he has the temerity to feel unfairly treated. Richard Wright picks up one of his lowest ratings ever, but I don’t fine him because I don’t need that situation to get worse as well. We really need to get that Federico Magallanes money in soon. But it will be another month before it arrives… 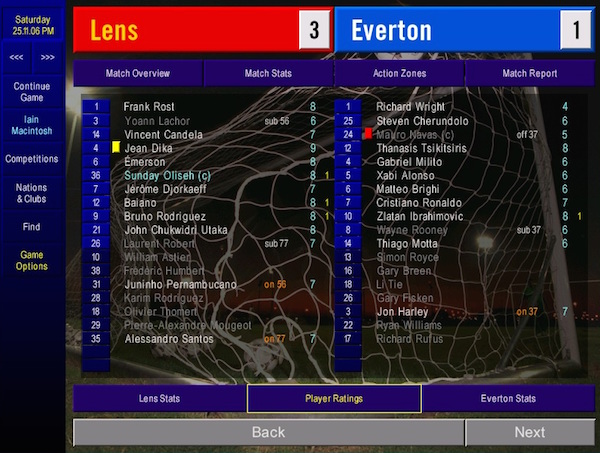 As the month draws to a close, we are in a mess. Ronaldo is facing suspension, Navas is unhappy and is facing suspension, Brighi already is suspended, De la Peña is still injured, Rooney is in abysmal form, Samba has only scored once in 10 games. And we’re away to Arsenal. Granted, Arsenal aren’t the force they were, having finished eighth last season and currently languishing there now, but they’ve still got that Thierry Henry/Kevin Phillips partnership that strikes fear into the hearts of their rivals. We’re not that fortunate, sadly. 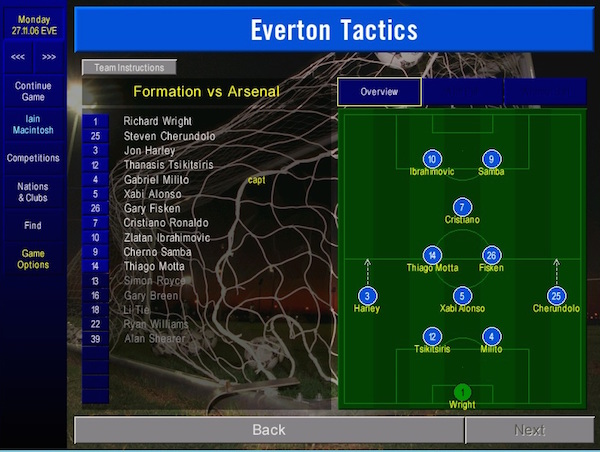 We were 2-0 up at half-time, we came away licking our wounds with a 2-2 draw. What a perfect way to end a perfect month. It’s funny how it can all go so wrong, so quickly. It takes a couple of injuries, a couple of injustices and then everything snowballs out of control. Before you know it, you’ve got a mix and match team of miserable bastards making hard work of everything. But this is what happens when you’ve never got quite enough money to make the changes you want and you’re forced to go from season to the next, knowing what’s wrong with the team, but being completely unable to fix it. We’ll be back. We always are. But November has been a tough month. 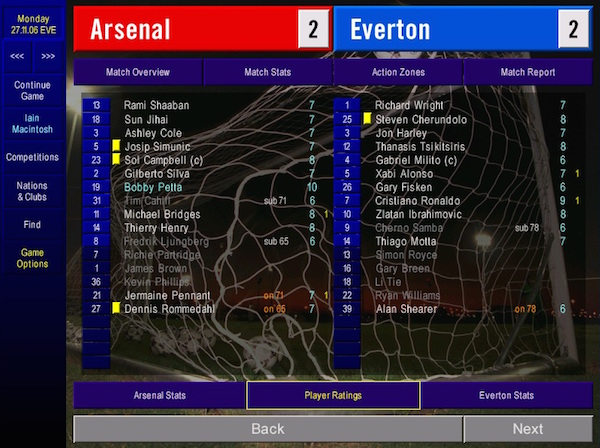 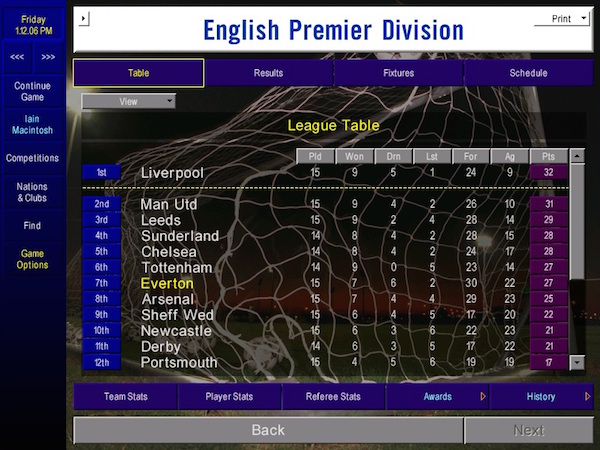 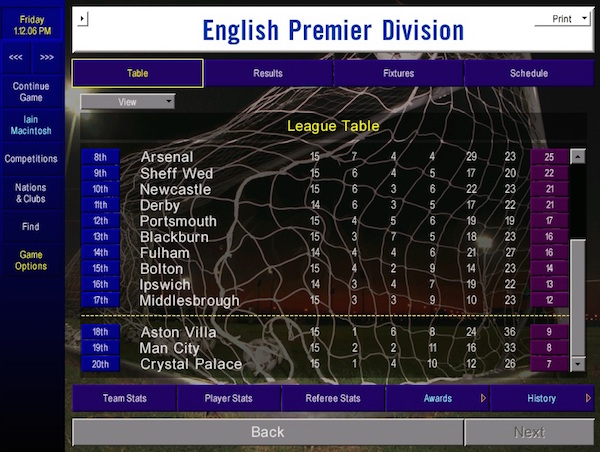