This is getting silly now. I’ve got Wayne Rooney, Cristiano Ronaldo and Zlatan Ibrahimovic. This is not like the old days when I had Joe Max Moore and Kevin McLeod. Maybe it’s too soon for a title challenge, but I should certainly have this Everton side challenging for a place in the top six. We’ve got the stadium, we’ve got a positive cash flow, I’ve dumped Duncan Ferguson and I’ve even swept up a handful of talented young players to cultivate in training. Everything is positive except for the results. But that will change this week.

Coventry are rubbish. Admittedly, they’ve just signed Jussi Jaaskelainen, the goalkeeper who helped Chesterfield knock us out of the League Cup, and that Callum Davenport is pretty decent, but they’re not 20th by accident. On my signal, unleash galacticos. 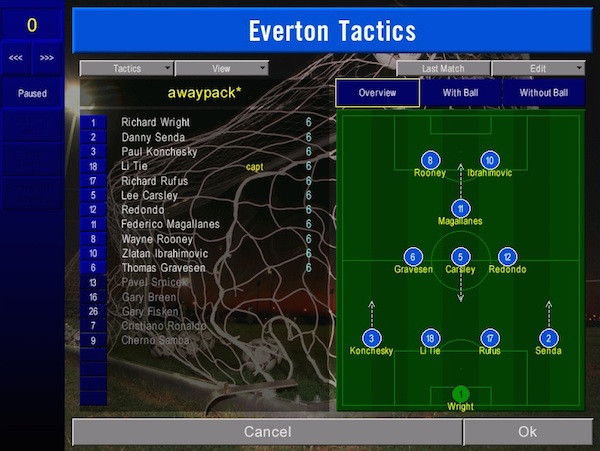 Oh, do I not like this. Do I not like this one bit. We were terrible. Like, genuinely awful. That was the worst team in the Premier League and they just ripped through us. Federico Magallanes scored 20 goals last season, but he hasn’t come close to scoring one yet. We can’t make chances, we can’t prevent chances at the other end. They had Jamie Carragher on the right wing, for the love of all that is holy. Jamie Carragher at right wing. What sort of a thing has happened here? And we’ve lost Wayne Rooney to injury too. This is not acceptable.

Chelsea are not the opponents we want right now. They’re full of pace and power and I’m really quite worried. With Rooney out, we’ll match Zlatan with Cherno Samba and give Magallanes another chance to break his duck. We’re so solid in the middle, maybe we can hold together. Come on, baby. Hold together. 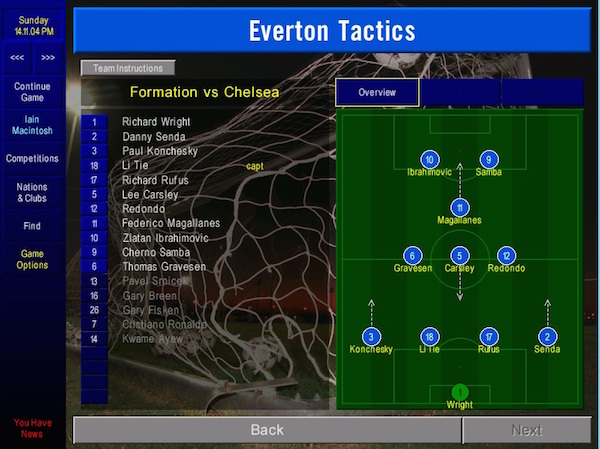 Harsh. Oh, so harsh. We battled here. We made more chances than Chelsea, we should have scored more goals than Chelsea. A draw would have seemed harsh, but when Vladimir Smicer put the Blues into the lead with ten minutes left, my heart broke. There were so many good performances here, but it still wasn’t enough. And that’s three games without a win now. 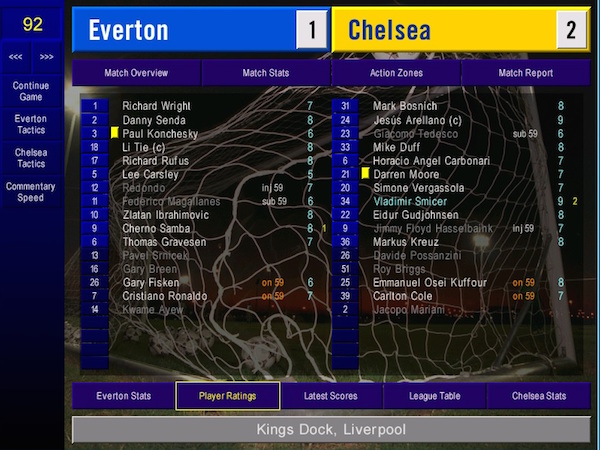 And so, in the form of our nightmares, we head to Anfield to see how the other half live. We’ve never beaten Liverpool. We’ve only drawn with them three times. But they’re not having a good season either. I’m not sure if they’re having financial problems or not, but they’ve sold £60m worth of players and only brought in Park Ji-Sung. So maybe this is the year. 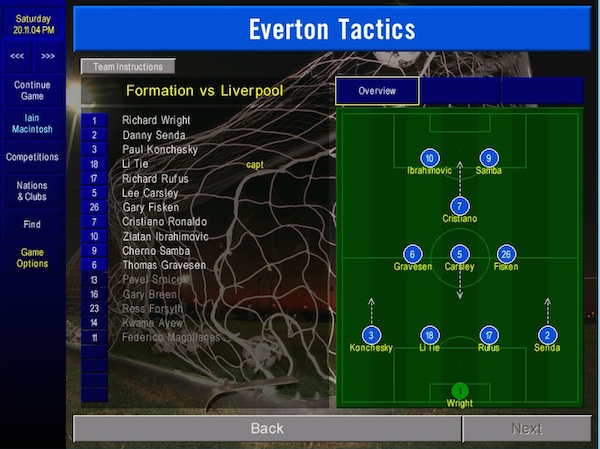 Bastards. Absolute bastards. We ravaged them. They got well and truly Cherno Samba-ed. But they didn’t have the common courtesy to lie down and accept their fate. And then bastard Gianluca Festa pops up at the bastard back post to save the game for them. And we lost Zlatan to another injury. This really isn’t going well. And for the first time in several weeks, I’m looking longingly at the drinks globe. 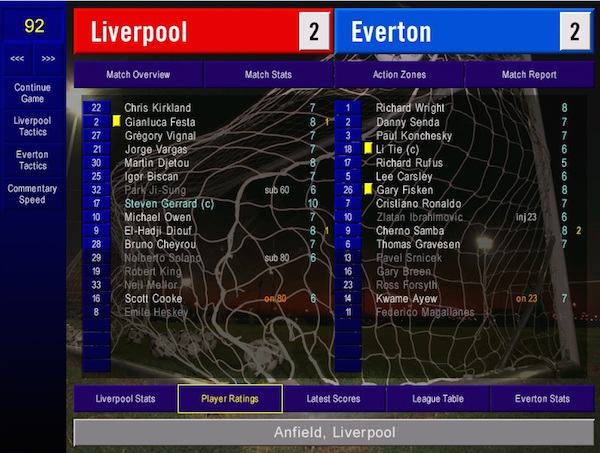 And so the month draws to a close with the one thing that all managers desire during a barren run of form. Sunderland at home. Sure, we’re missing a few players, but we still have our pride. We still have our fight. We are still Everton. We are still resolutely Everton and we always will be, for good or for ill.  Today, we write the stories we will tell our grandchildren. Their faces will light up with joy when we speak of Rufus and Fisken, Konchesky and Carsley. And this, this moment here, will be the turning point, the pivotal act, the game that turns it all around. Get out there, you sons of fine women. Get out there! 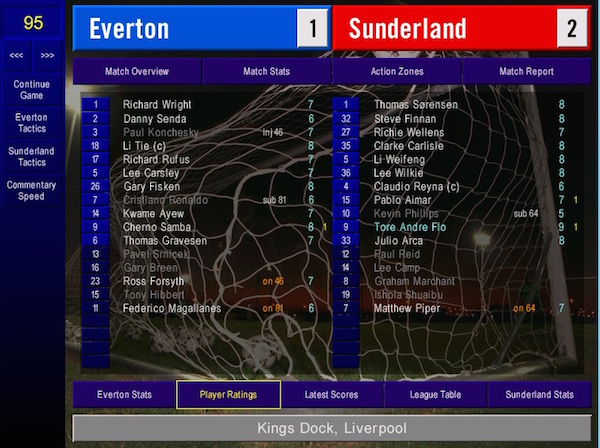 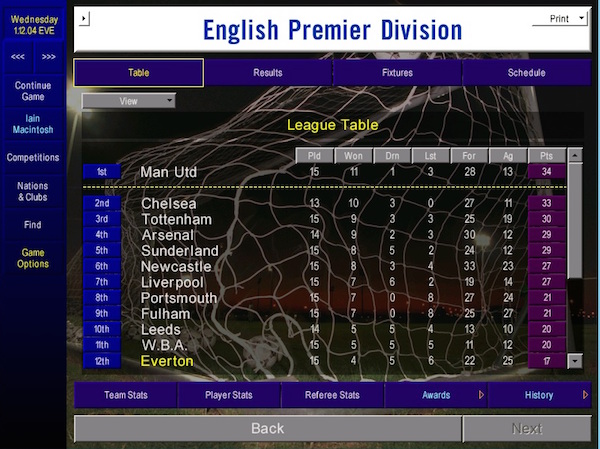 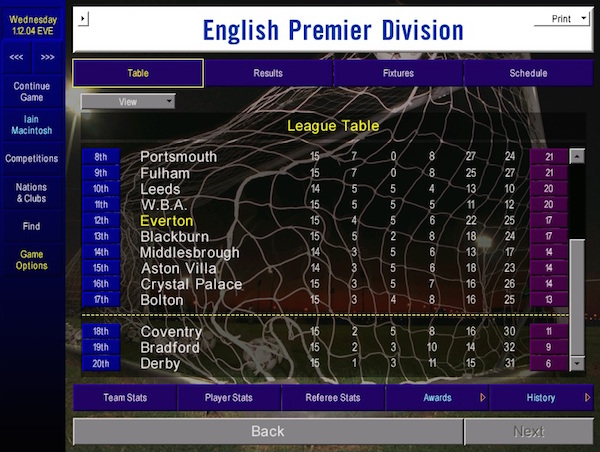