Everyone in this life is motivated by something. Some seek glory. Some seek redemption. Some seek only gold. But some people find themselves driven from one day to the next by nothing more than white hot hatred. They are of the darkness, their souls are poisoned wells of resentment. Everything they achieve is borne out of a festering rage. They are my people.

It’s been nearly five years and I have still never beaten fucking Liverpool. They sit up there at Anfield, with their “history” and their “class” and their “famous European nights”, and they sneer down their noses at us. Ged Houllier and his over-priced band of hoof-merchants. And they’ve still never won the Premier League. And they’re in seventh. And yet we’ve never beaten them. 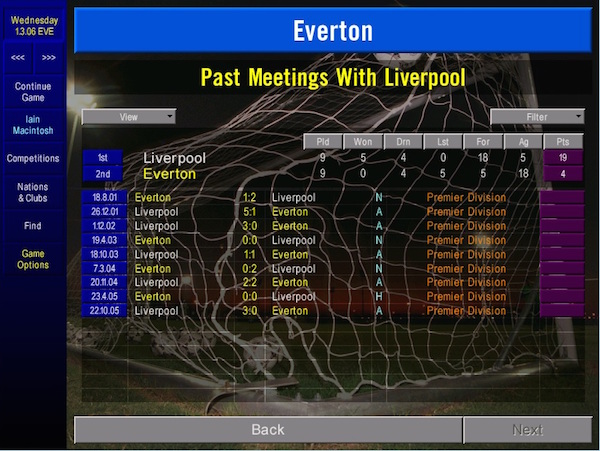 I’m not bothered about winning a cup. I’m not bothered about winning the league. You know what? I’m not even bothered about qualifying for Europe. I just want to beat those red bastards. We’re strong. We’re ready for this. I need you, Wazza. I need you, Zlatan. Don’t break my heart, Federico. Please. I need this. I don’t just want to knock Liverpool off their perch. I want the perch set ablaze. I want to keep the ashes of the perch in a small, ornate box so that I can put it on my desk, pop it open and take a deep sniff every time I’m having a sad day. 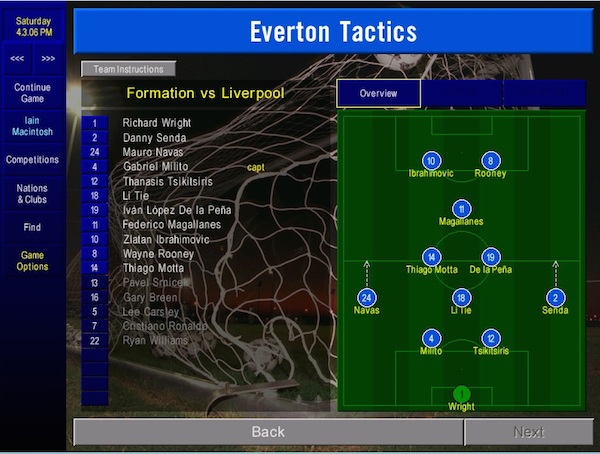 Mort de ma vie. All is confounded. All. Reproach and everlasting shame sit mocking in our plumes. Oh, perdurable shame. Let’s stab ourselves. Be these the wretches that we played at dice for? Is this the king we sent to for his ransom? Shame and eternal shame. Nothing but shame. So, no, Geoff, I’m not happy with a point. 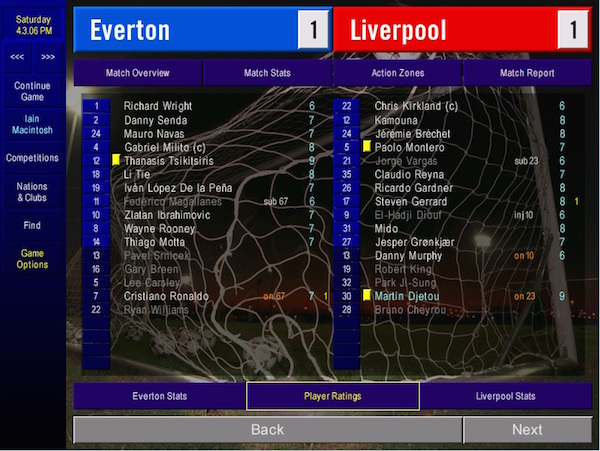 We had it. We were so close. We shut them down, we forced them into frantic tactical changes. In the second half, we stepped up and then Cristiano Ronaldo scored a wonderful solo effort in the 78th minute. I knew what had to be done, I knew that we needed to close the game down. Liverpool kicked off and I clicked for the tactical change, but the game wouldn’t stop. It wouldn’t stop until the ball had gone out of play. But it didn’t go out of play. It didn’t go out of play.

It went to Ricardo fucking Gardner and he belted down the left flank with it. It didn’t go out of play and it didn’t matter how many times I clicked for a tactical change. Gardner crossed into the box and Steven poxy Gerrard beat Richard Wright to the ball. And that was it. That was how it ended. A stupid, pissing, meaningless draw. And we’ve only got one more game this month because we screwed up in the cup and I am so angry that I can taste blood in my mouth.

We may only have two games this month, but they’re both big ones. Chelsea are pushing hard for third place, but they have European commitments before we meet them. So at least we’ll be fresh. Claudio Ranieri has done well at Stamford Bridge. They’ve won two League Cups, an FA Cup, a UEFA Cup and they were runners-up in the Champions League last season. He plays that 3-5-2 formation that’s so in vogue in this alternative reality and he’s almost completely turned over the squad he inherited. Celestine Babayaro, Eidur Gudjohnsen and Jimmy Floyd Hasselbaink still remain, but almost all of the other big names are gone. They should be feared.

We’re still without Richard Rufus and Cherno Samba, but I think I’ll keep faith with the eleven that drew with Liverpool, with one exception. In the days building up to kick off, Chelsea beat Barcelona 3-0, but they also lost 0-1 to Inter. So maybe there’s hope. 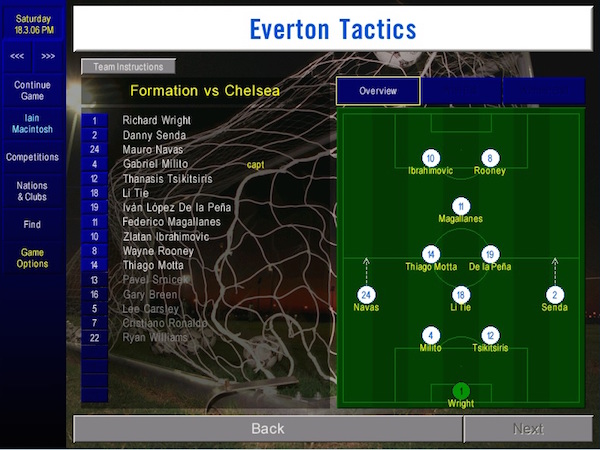 Nope. There’s no hope. Nobody loves me but my mother. And she could be jiving too. We’ve been done here. Hasselbaink opens the scoring early on, but it’s a fairly even game. In the second half, with no sign of an equaliser, the disappointing pair of Zlatan and Magallanes are hauled off and replaced with Ronaldo and Ryan Williams. That makes an immediate difference, not least when Williams is wiped out in the box by Mark Bosnich. But nothing is given. We should have a red card and a penalty. We get nothing. And so the game slips away. 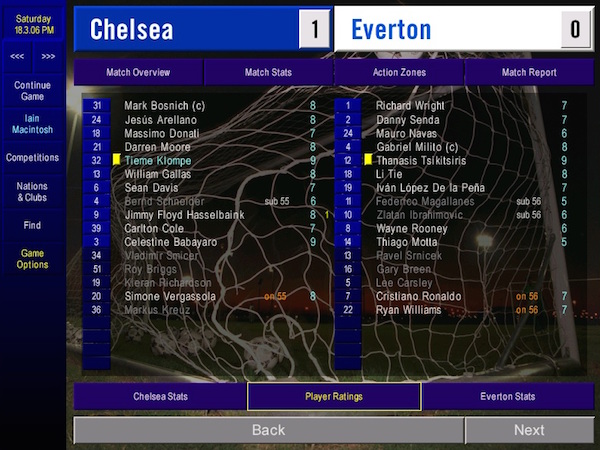 Chelsea overtake us and take third place. More importantly, we haven’t won in four games.With eight games to go, we’re in danger of letting the season slip away. We have six games in April. I think we need to win at least four of them. Challenge accepted. 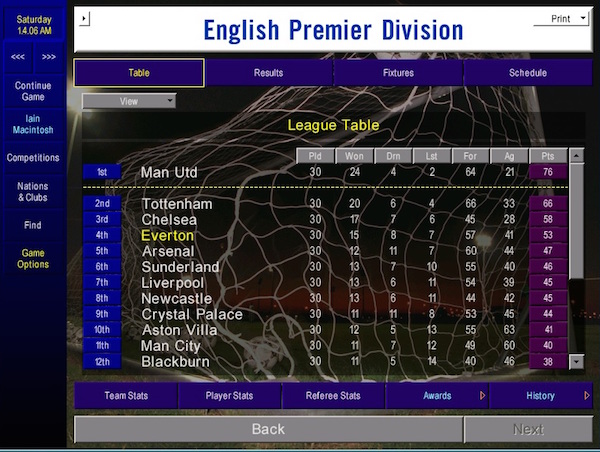 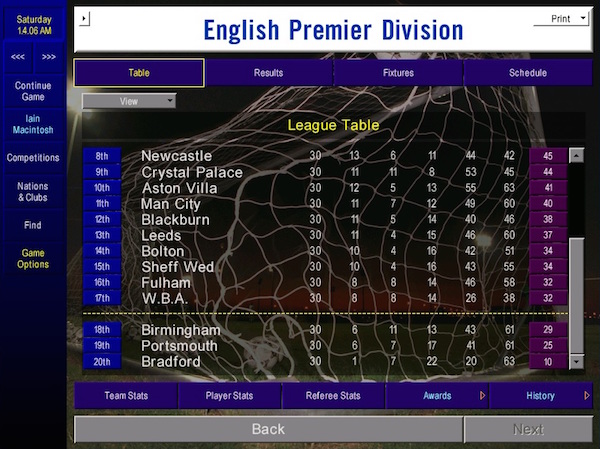