It has been a busy summer, but I think it’s been a good summer. Whatever doesn’t kill you, only makes you stronger. Except for debilitating muscular conditions or chronic fatigue. Or syphilis for that matter, that can really cause some problems. But generally speaking, you know what I mean. We’ll learn from what happened last year. We’ll grow.

It’s a new season and it’s a new chance for everyone to shake off the disappointment. With the changes to the make-up of the squad, we’re now in a position to be more versatile. Against teams who play 4-4-2, we’ll match up with them and I expect that with the calibre of players we have, we’ll come out on top more often than not. We’ve got pace, we’ve got energy, we’ve got talent. Crystal Palace are an inferior team and if all goes according to plan, we should come out of this with a comfortable victory. We’re not at full strength – that suspension for Gabriel Milito is annoying – but I think we should be just fine here. You may note that Zlatan has been left on the bench. As it stands, he is the striker I’ve placed on the naughty step. But things can change. 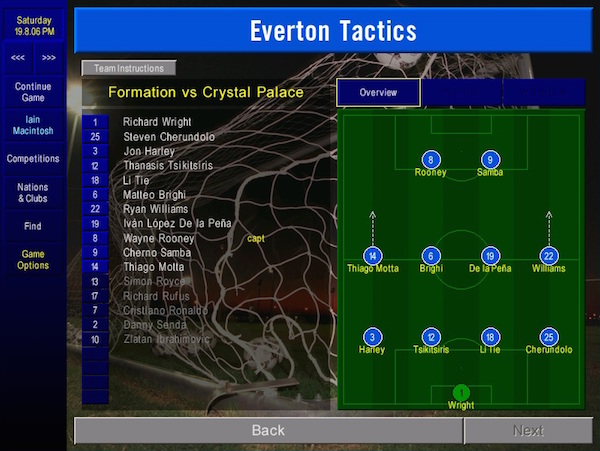 That is absolutely appalling. The game should have been over at half time. We created a dozen chances, nine of them on target. They had four. Two points dropped and smashed upon the floor already. Matteo Brighi gave us a deserved lead midway through the first half, but we couldn’t build on it. Ade Akinibyi’s equaliser, just after the break, came out of nowhere. Then Dougie Freedman put them 2-1 up. Both were just routine shots, nothing special. Thankfully, Ryan Williams struck an equaliser, but for all our possession, we couldn’t find a winner. A slip. A very annoying slip. We’ll have to get sharper and we’ll have to do it quickly. 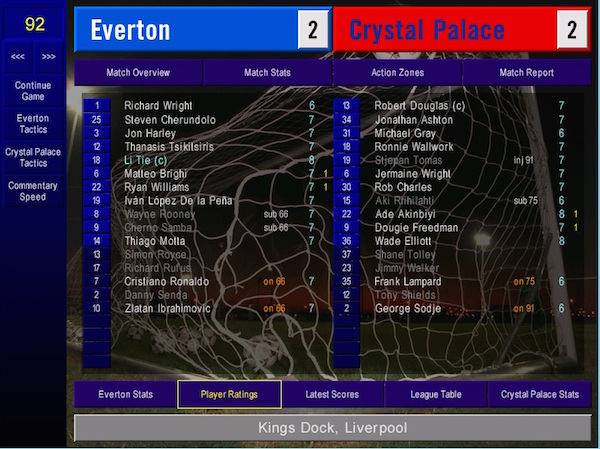 Fortunately, there is an opportunity to immediately make amends. Another home game, this time against Newcastle. Now, the Magpies play that 3-5-2 formation that seems so popular, so there’s no way that we can play 4-4-2 without leaving ourselves wide open. But with good man marking, Li Tie shutting down Paul Scholes and the full backs pushing up, we can give them real problems. Once again, I’m very confident. This is the best Everton team I’ve ever had. They just need to show everyone else now. 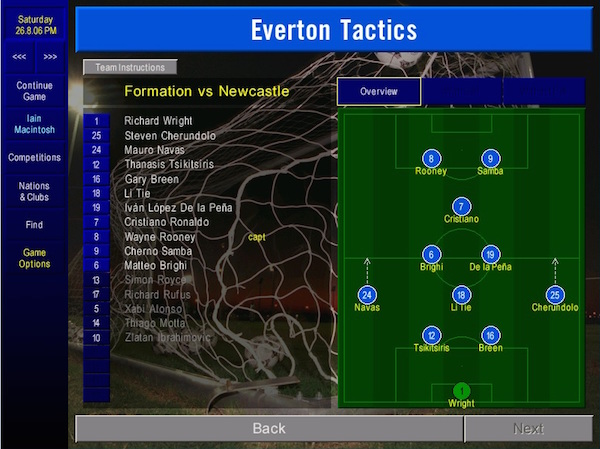 Sigh. In a way, I feel like I’ve brought this on myself. I haven’t exactly kept my doubts over Richard Wright quiet. But the problem is that, even with the new stadium, we’re not made of money. There’s only so much in the pot. And so over the summer, I decided to show loyalty to the man who did so much to save my bottom in the early years. And what a mistake that proved to be.

We were a goal down very quickly here, a Zissis Vryzas snapshot that caught us completely by surprise, not least because we’d been by far the better team. And that’s what I saw the best of this Everton side. Heads stayed up, shirts got sweaty and we were level within five minutes, thanks to a Cherno Samba header. Ten minutes after that, we had the lead we deserved with another goal from Matteo Brighi. And then, with just a couple of minutes before the break, Samba lobbed Danny Coyne to make it 3-1. And we were worth that 3-1 lead.

But the game changed when Gary Breen was sent off with 18 minutes to go. When you play a mad-arsed formation like this, you can’t sustain it with ten men. Changes were made, defensive players were brought on and we looked to shut the game down. And we would have shut the game down, had Wright been even remotely competent. In the 86th minute, this giant custodian allowed Vryzas to get above him and make it 3-2. And then, with crippling inevitability, he was beaten in injury time by Diego fucking Gavilan. This is not the first time we’ve been stunned by an implausible Newcastle comeback. You’d think we’d learn something from the experience. 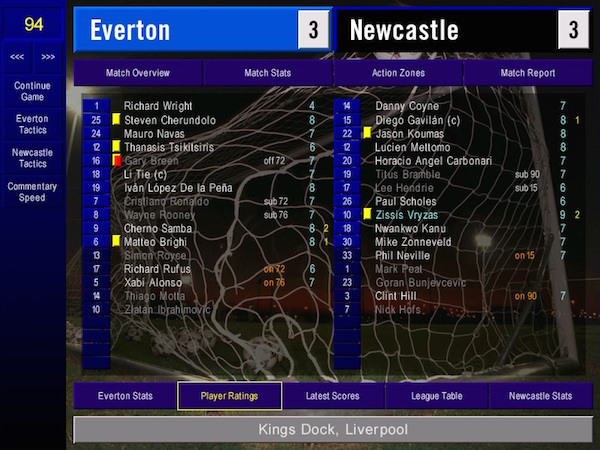 And unfortunately, my patience is exhausted now. I haven’t got the money to do anything about it, but that doesn’t mean I won’t try to raise some. If someone’s coming in, someone else needs to leave. Wright can explain to Federico Magallanes why I’ve just put him on the transfer list. And as soon as he’s gone, Wright will swiftly follow. It’s time for a change between the sticks. 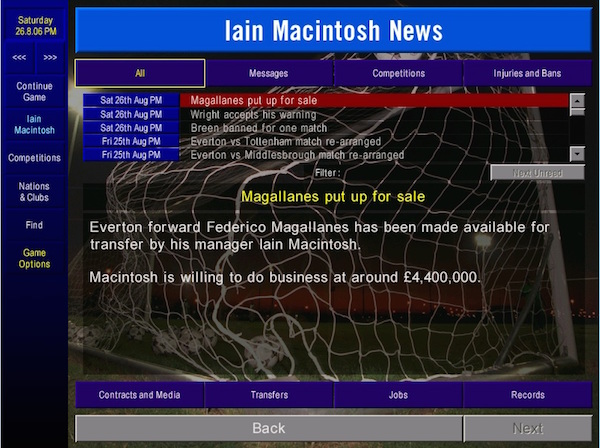 We should have won both of those games. We should not be in the bottom half of the table. I am unconcerned by any silver lining enthusiasts keen to point out that we’re unbeaten. This is intolerable and I demand better. There’s a storm brewing at the Kings Dock. I’ve had just about enough of this shit. And to make matters worse, they’ve done the draw for the UEFA Cup. Did we get some village side from Malta? Did we land ourselves some amateurs from Finland? No. No, we did not. We got fucking Porto. I’m livid. 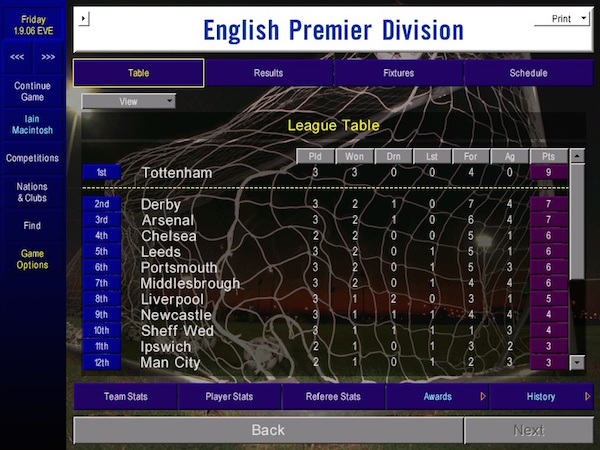 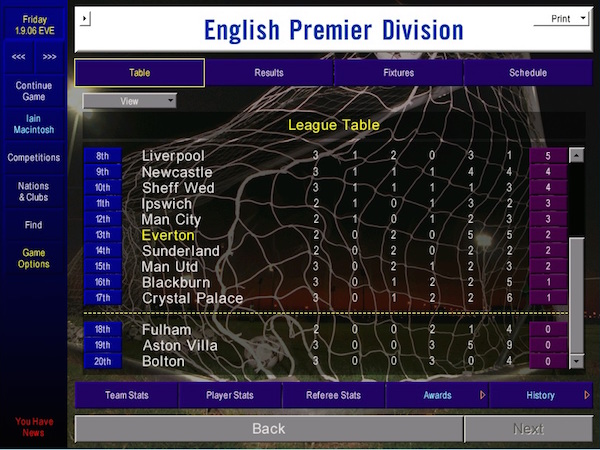