So, this is it. The final reckoning. By the end of this month, I think we’ll know whether Everton have made a glorious return to the Champions League, an apologetic soft insertion into the UEFA Cup or the absolute horror of dropping out of European football entirely. So no pressure. But is it really that bad? We’ve played most of the really hard games now. The fixtures still to be fulfilled are the ones that, broadly speaking, we should be winning. So it’s about time we started to win.

Manchester City are up first. The team with the weird 3-3-2-2  formation that inspired my own weird formation. I’ve had just about enough of Zlatan’s meandering in front of goal, so I’m going to go with Wayne Rooney and Cherno Samba for a bit. Cherno still only has five goals to his name, but perhaps if I show some faith in him and give him a run in the side, he’ll find his form. We did these comfortably enough last time, so I’m fairly convinced we can do it again, despite our recent run of form. 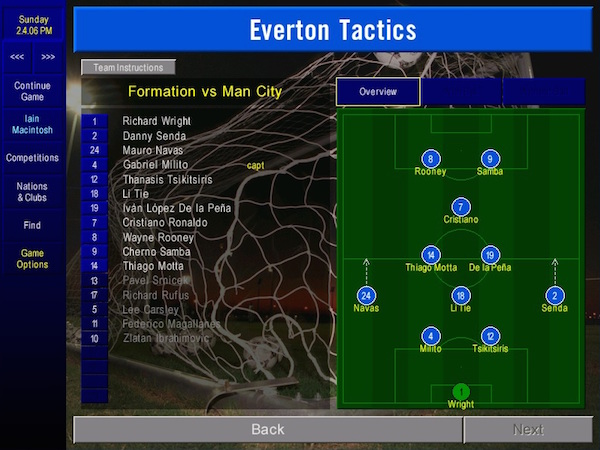 I’m losing the will to live. There have just been too many games like this. We scored with our first attack, the marvellous Thanasis Tsikitsiris with a header, but that was the only time we beat Arni Gautur Arason. Now, I don’t know a lot about Icelandic football, but I’m fairly sure that Arni Gautur Arason is not the best goalkeeper in the world. He’s conceded 68 goals this season, so I feel that I’m on safe ground with that assessment.

Nevertheless, we made him look incredible. We do that a lot. He saved two Ronaldo shots, two De la Pena shots and two Thiago Motta shots. Rooney and Samba, if you care about these things, had two shots each. All four of them were off target. With their first effort on target, Matias Vuoso scored the equaliser. Desperate not to drop points, I replaced Li Tie with Zlatan, pushed him up top and went for the win. Naturally, Jafet Soto scored for them instead. In amongst all of that, two perfectly good penalties appeals were turned down, to go with the penalty we didn’t get against Chelsea in the last game. At the end of this season, I need to sell one of those three strikers. Of all the things that worried me about this season, I never thought I’d have to worry about not scoring enough goals. 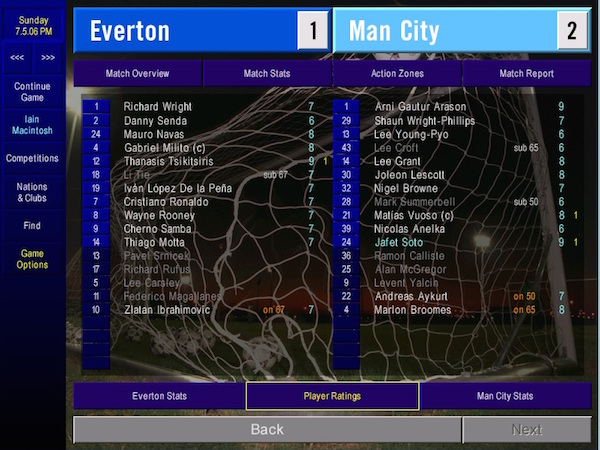 The last thing we need now is an away trip to the north-east. Sunderland are one of a number of clubs suddenly gaining on us and we don’t want to give them a helping hand. We’re out of form, we’re out of puff and I’m starting to get a bad feeling about this. But let’s keep the faith. I’m sure that Samba will start scoring soon. 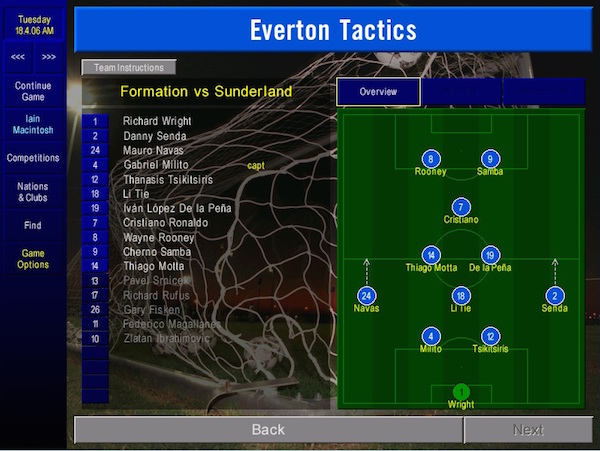 Yes, that was to be expected. Another day, another 9/10 for the opposition goalkeeper. We had more chances than Sunderland, we had more shots on target than Sunderland. We ended the day with the same number of goals as Sunderland. Two shots from Samba, both saved. One shot from Rooney, saved. No shots from Zlatan in 31 minutes on the pitch. We have quality all over this team. Stop laughing! We really do. Richard Wright has settled down, Mauro Navas has been brilliant, the defensive pairing of Gabriel Milito and Tsikitsiris are outstanding, Li Tie is brilliant, Ronaldo is getting better all the time. But we just can’t get a goal out of our strikers. Zlatan has 14, and I swear he must have scored them all in the same month. Rooney has eight and Samba still only has five. What a crying, pitiable shame. 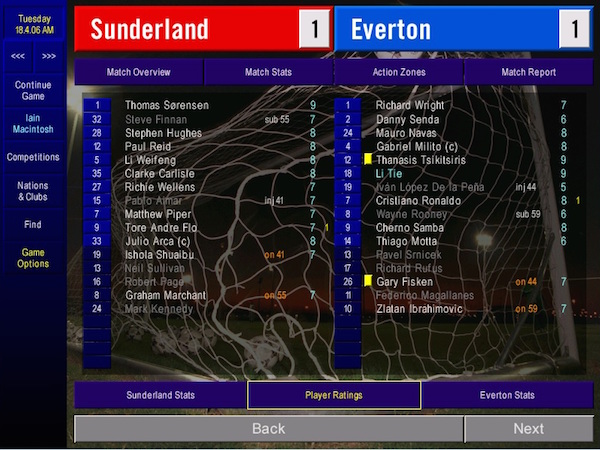 We have to clean up against Bradford. They have already been relegated. They’ve only won twice all season. This has to be the day when it all comes together. Doesn’t it? Ivan de la Pena is injured and so Gary Fisken will come in for a little run in the team. There seems little point in playing the outgoing Thomas Gravesen or the outgoing Lee Carsley. We can’t take the risk that they won’t be up for it. 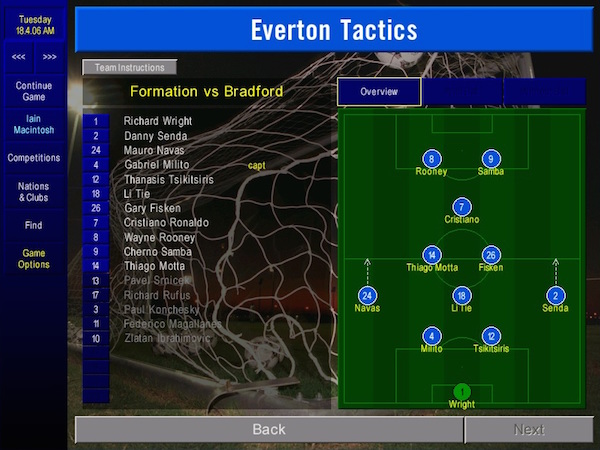 It takes us 93 minutes, but we finally break Bradford down and win for the first time since mid-February. By the time Rooney pulls his foot ball for the crucial shot, my face is streaked with hot tears of frustration. Bradford goalkeeper Danny Morgan is on 9/10, just like every other goalkeeper we’ve faced this season. We have three men up front, including Ibrahimovic who has just put three chances in a row wide. We’ve been denied a penalty, our fourth in three games. Fisken has a shot that brings an outstanding save.  I’m just about to slam my head repeatedly in the laptop until the sweet, sweet release of unconsciousness ends my torment…and then Rooney scores. With five games to go, we hold a three point lead over Newcastle, and four over Arsenal and Sunderland. We have no chance of reclaiming third, we’ve been far too shit for that. But we can still take fourth. 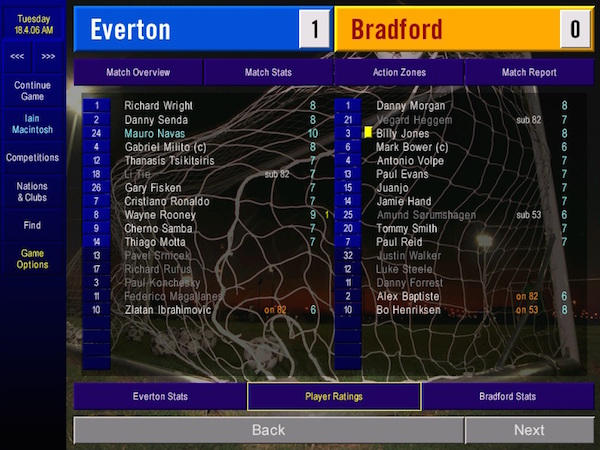 I’m hoping that gives our players some confidence for the next game, a trip to Aston Villa. We’ve had mixed results at Villa Park over the years, but they’re certainly not a team to be feared. Once again, in spite of all evidence to the contrary, I’m going to put my faith in Samba. I know he can do this. He’s Cherno bleeding Samba. He’s supposed to be amazing. 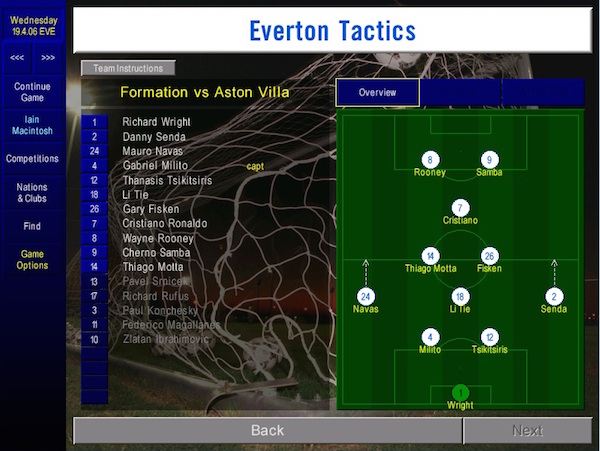 He still hasn’t scored, but at least he’s making goals. And so are we. Villa actually take the lead through Stefan Moore, but it’s just a passing phase. Before the whistle goes for half-time, we’re 2-1 up through a Rooney brace and we’re looking good. It’s an open game and I’m delighted that Richard Wright’s form has returned. He makes a couple of big saves, fills us with belief and then it all started to get much, much easier. A goal from the wonderful Mauro Navas and then another from Federico Magallanes seal a much-needed win. Finally, we’ve taken what we’ve deserved. Life at Kings Dock feels right again. 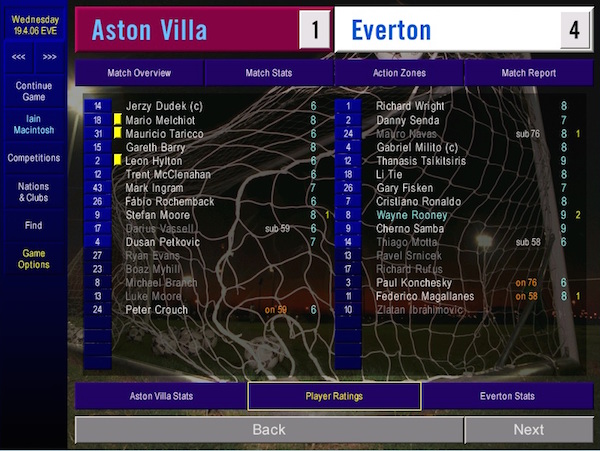 And so we’re in good spirits for the clash with Tottenham. They’re playing a weird Christmas tree formation that necessitates a tactical change of our own. We switch to zonal marking to deal with their crafty movement. After a series of unconvincing performance from Thiago Motta, I’m pushing Cristiano Ronaldo into the midfield and bringing back Magallanes. Tottenham are second in the table and are to be respected. But I’ve got a good feeling about this. 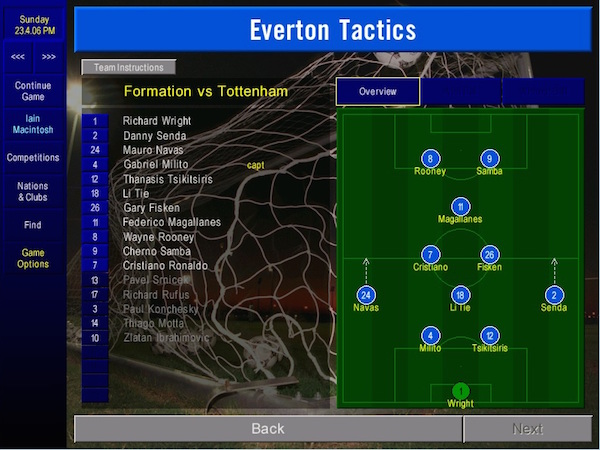 Jesus Henry Christ, what a disaster. It’s bad enough that we’re desperately flat and deservedly 0-1 down before half-time. But then this happens… 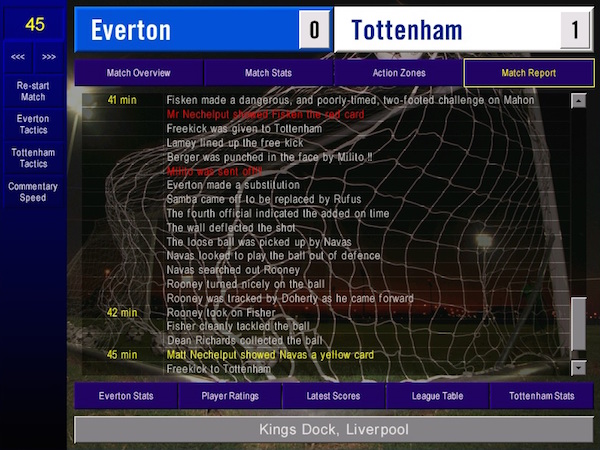 Who punches Patrick Berger in the face? He’s lovely! What was Milito thinking? He’s our best player by miles. He’s our captain. We’d already lost Fisken to a horror challenge on Gavin Mahon. It was a time to fall back, lick our wounds and limp to half-time. It was not a time to Call 99 and start swinging haymakers. This bloody football club. Quite how we kept the score to 0-2, I’ll never know.  Needless to say, both players are fined two weeks wages. 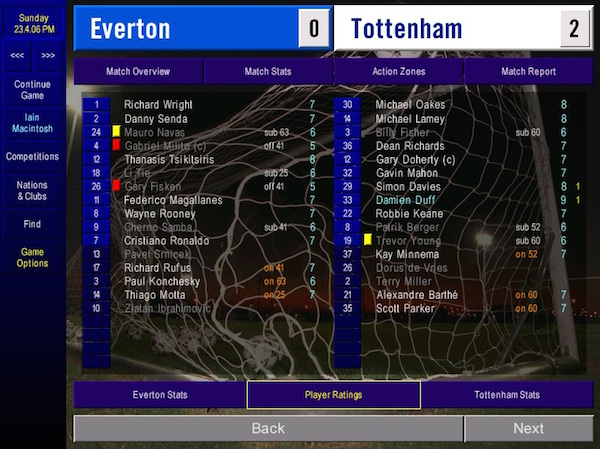 So, I think it’s fair to say that we need a bit of a response here. We have just three games left and, while we still hold fourth place, we can’t afford to do anything else other than win. Newcastle, Sunderland, Arsenal and Liverpool can all rein us in. Milito, for reasons of naked pragmatism, will keep his place in the team until his ban kicks in. Fiskin, who isn’t nearly as good at football, will not. De la Pena is back. And yes, Samba is still in the team. I’m riding this donkey all the way to the end of the beach and I’m not looking back. 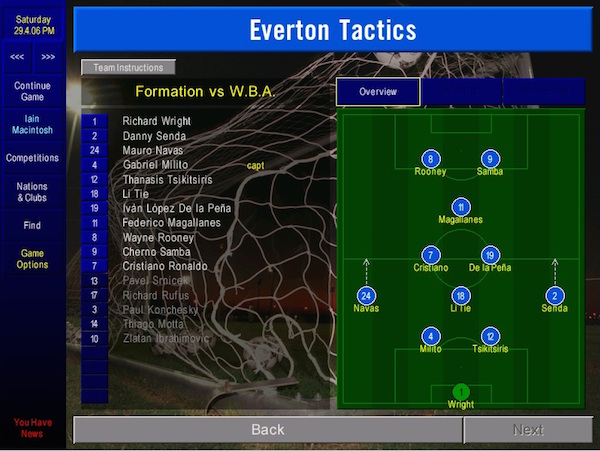 Now we’re talking! Finally, we come up against a goalkeeper with all the physical presence of a silent fart. God bless you, Andy Oakes. With three shots on target, we find ourselves three goals up inside the first half an hour. It has been a long time since I’ve had a stress free Everton game. We have good performances all over the park, Rooney is back in form and look at that, a goal for Zlatan. Still nothing for Samba though. Still nothing. But let’s worry about that another time. 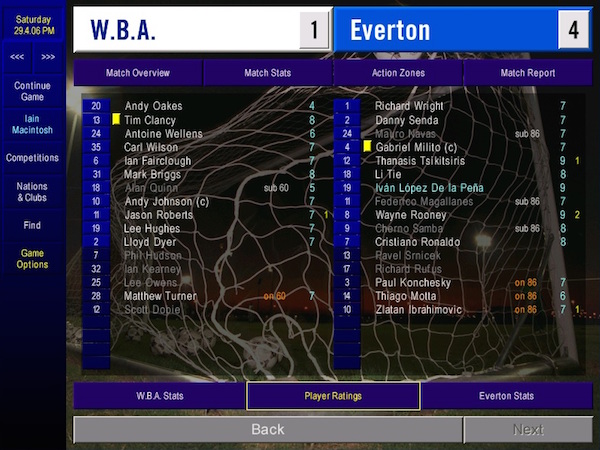 Look at the league table! With two games to go, we’re five points clear of Sunderland, Liverpool and Newcastle. We play Sheffield Wednesday at home and Portsmouth away and a single point might be enough to put us in the Champions League. Of course, it might not be. Sunderland have the same goal difference as us, Liverpool are only one behind and Newcastle only four. But a win…a win at home to Sheffield Wednesday. That would do the job. We’re so close to a wonderful, wonderful conclusion to the season. This is going to be a long week of waiting. 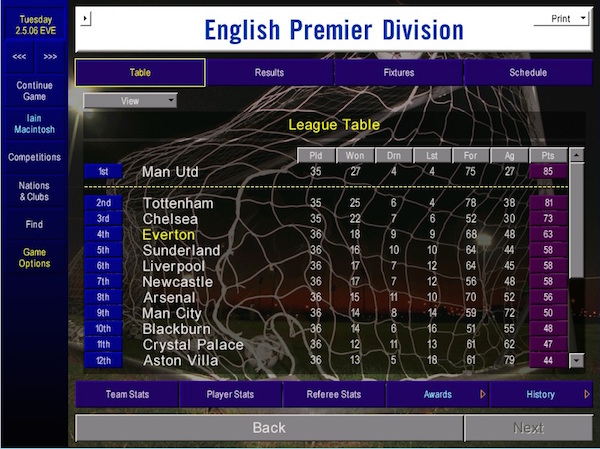 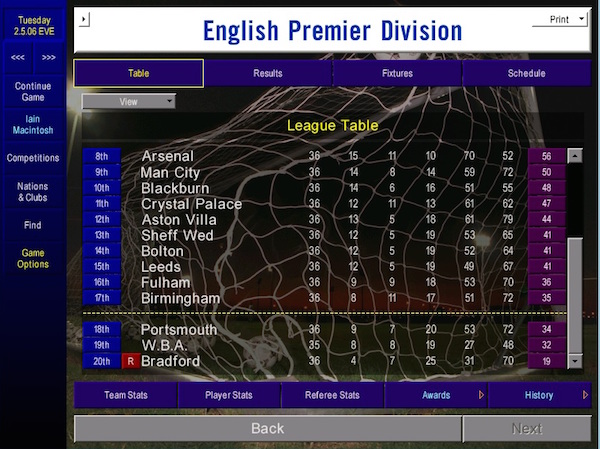