It’s the greatest question dividing football fandom: just who is the better player? The Argentine magician of Barcelona, the maestro who can do things with the ball that many of us couldn’t even imagine, or is it the footballing Terminator in Madrid whose efficiency records (let’s not mention this season) are the envy of German manufacturing companies?

So many golden balls, so many golden cojones…not even all these years playing in the same league has produced a conclusive result. But this is where I, Dr. Luci Kelemen, come in.

It’s super simple, really. Whichever player is better will surely make his whole team better. So, hypothetically speaking, if Lionel Messi is the best, then a team of eleven Lionel Messis should beat a line-up of Cristiano Ronaldos. It’s called mathematical induction, people! It works!

Of course, they will also have to manage their respective teams for the completeness of the experiment. And this is where Football Manager’s patented photo importing function comes in.

First up, we’ve got Leo Messi getting ready to start his career in the dugout… 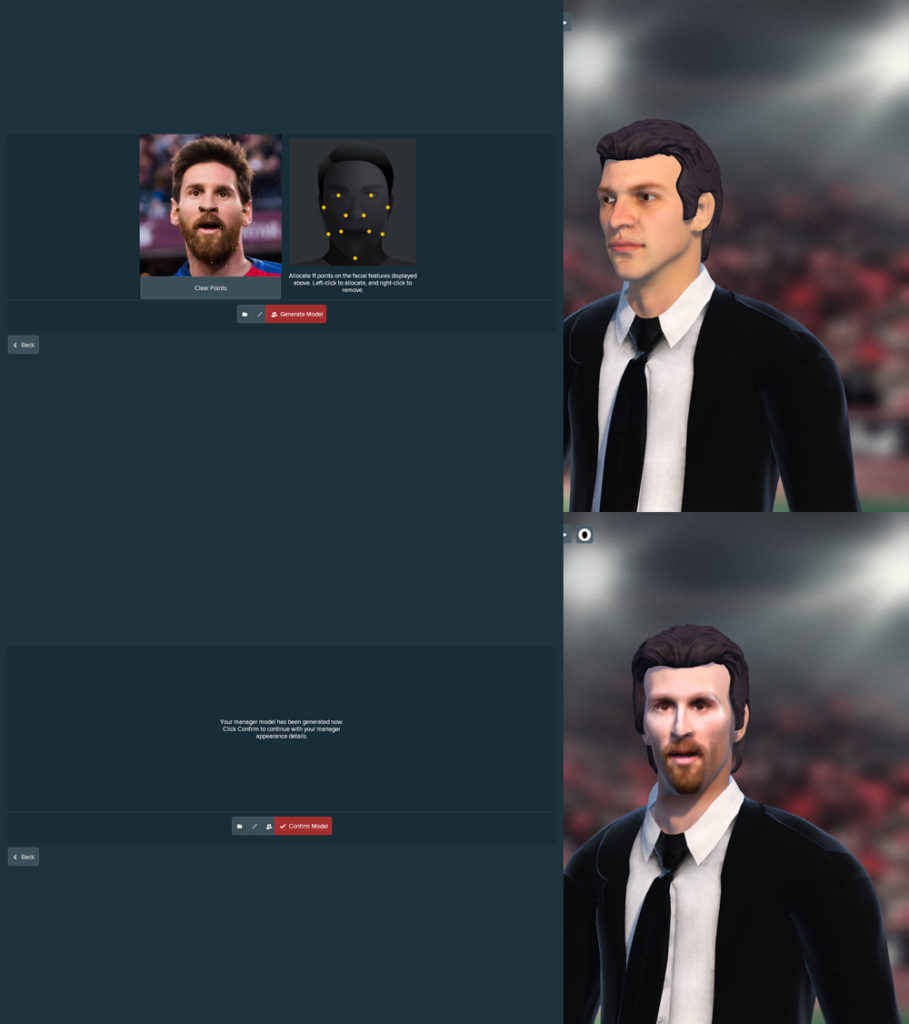 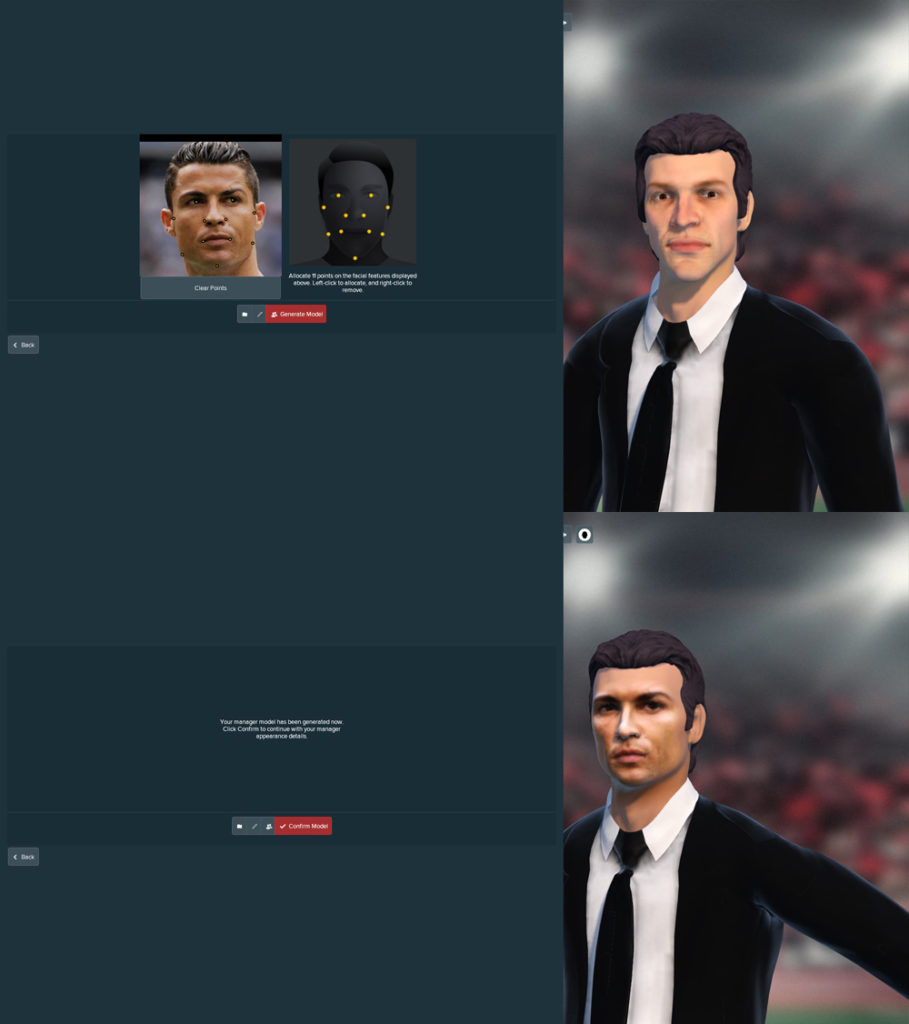 Let’s quickly put this Lovecraftian monstrosity behind us and continue our experiment. I ask the two managers to put their rivalry aside and agree to a friendly before the season kicks off. They begrudgingly accept my request.

Both of them get a softball game against a team of minnows to prepare and practice tactics. FC Messi will be going up against Bayeux while Cristiano Ronaldo’s Personal Clone Army face the aptly named Old Boys.

Once these matches are out of the way, we’ll unleash these two Frankenstein FCs on each other.

Both teams have picked formations that are ideal to accommodate their fantastic starting XIs. Messi has gone for a strikerless 4-3-3 to maximise both the tiki and the taka… 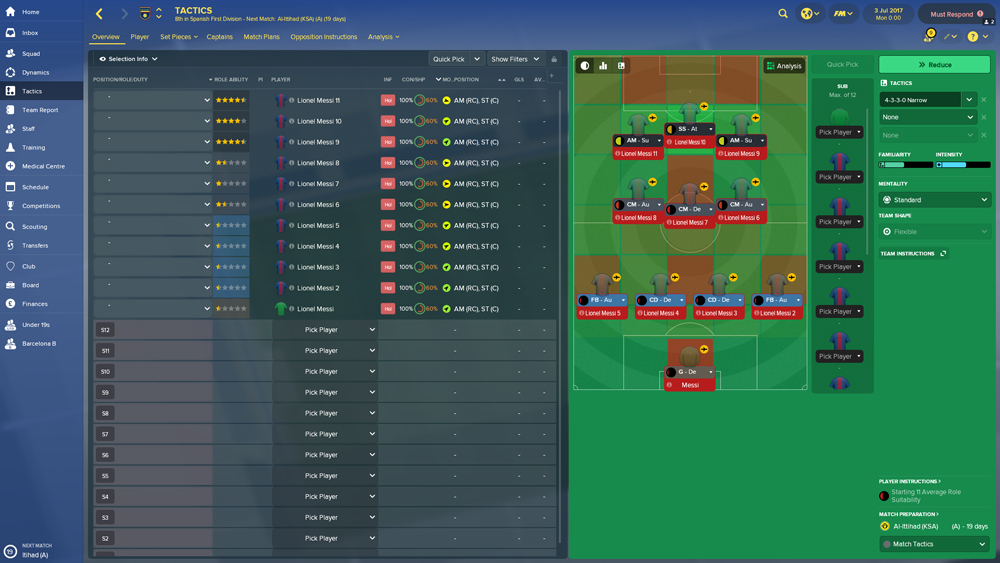 …while Ronaldo, after bitching about his CGI image, has opted for 4-2-3-1. 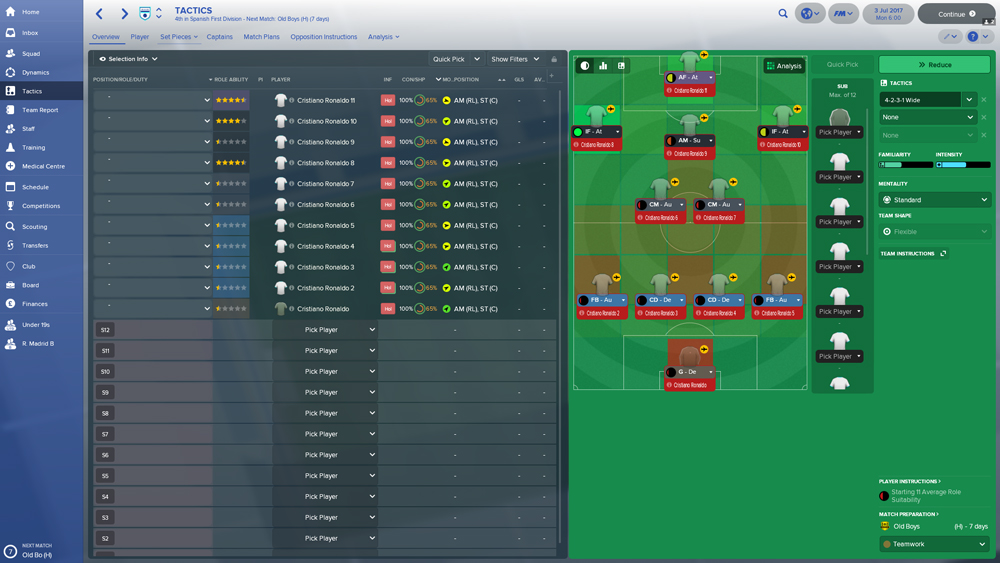 So that’ll be Ronaldo running down both wings to feed the ball directly to himself in the middle. No-nonsense, straightforward tactics relying on pure pace, strength and skill. Even Tony Pulis would approve.

Let’s move on to the pre-arranged friendlies against the minnows. First up, it’s FC Messi against a newly promoted side from the French equivalent of League Two. What footballing tapestry will the Barcelona star weave against Bayeux…? 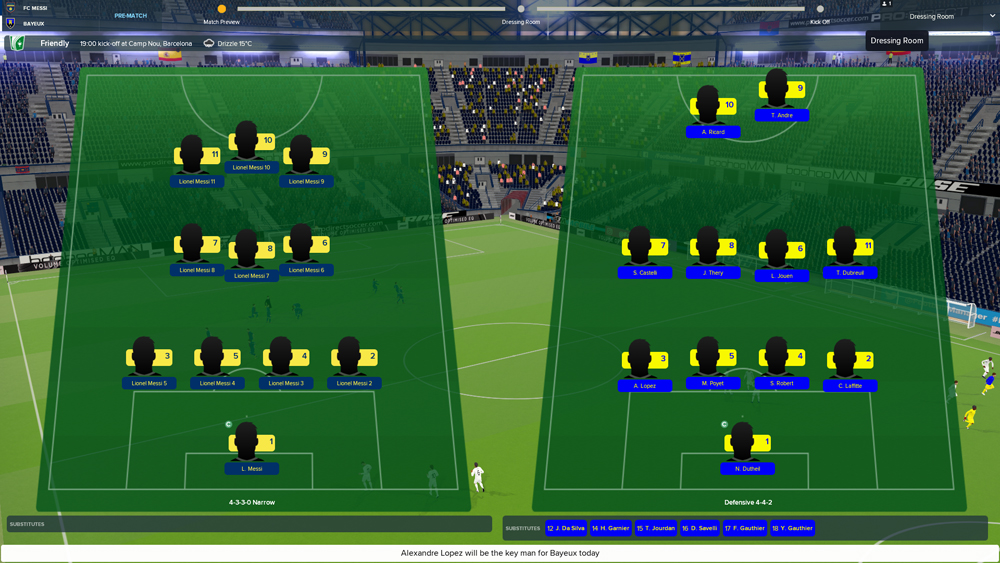 Eleven Messis swarm the field and go on the attack right from the whistle. There’s some lovely interplay between Messi and Messi, who then passes it to Messi and … you get the idea.

Bayeux simply can’t keep up with this much condensed skill and quality. They immediately go behind as Lionel Messi #9 receives a beautiful through-ball from Lionel Messi #6 and slides home.

As if getting an assist wasn’t enough, #6 then proceeds to score soon after. The French side desperately try to hold on, but it’s only three minutes before an excellent shot from Lionel Messi #11 from outside the box sails in for the third. The first half ends 6-0.

FC Messi doesn’t let up in the second half either: #10 bags two while Messi #9 completes a well-deserved hat-trick. It’s a rout: 9-0, 45 shots, 13 on target, 69% of which ended up in the net. The other team failed to register a single attempt. A magnificent performance. 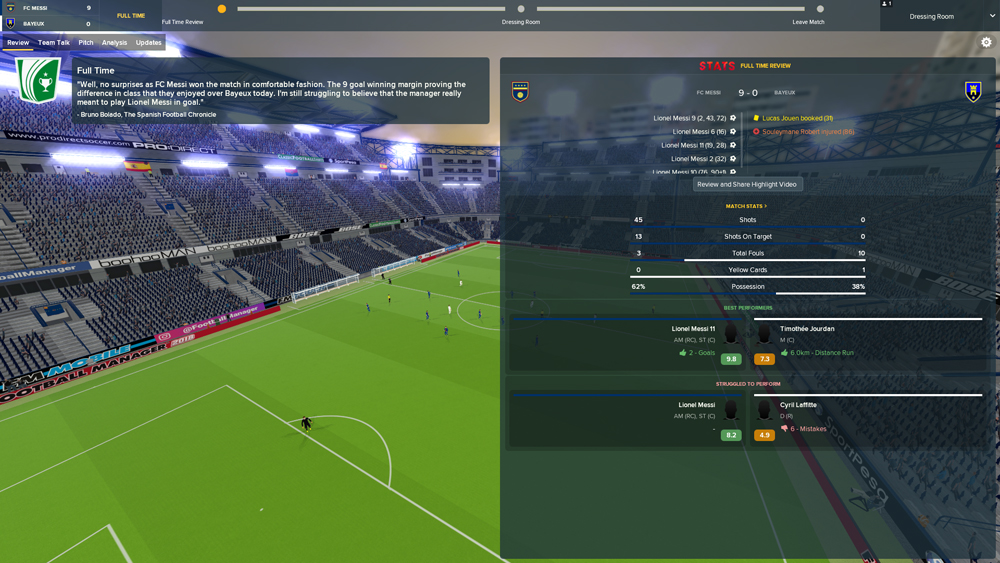 Not wanting to be outdone, the Ronaldo clone army quickly sets about demolishing Old Boys. They threaten to wipe the small Scottish club from the map with four goals in the first half.

But the break seems to deflate the Ronaldos. Frustration over not scoring as many as FC Messi, complacency, something else – whatever the case may be, they take it easy in the second half.

At least their fans seem happy: they may have lost the battle against the clones, but they kept their humanity. 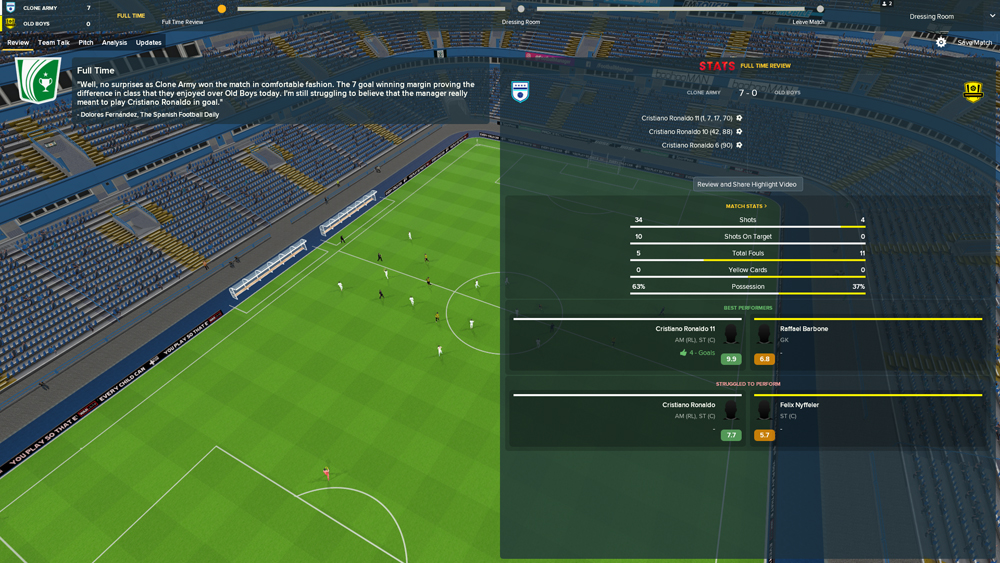 With these mouth-watering preliminary fixtures out of the way, it’s time for the real quiz to get under way. Let’s listen in on the managers’ team talks…

“You’ve got to make sure you cover Ronaldo’s runs, and we need at least two of you covering Ronaldo in the box. They’re playing an unknown and inexperienced left-back called Ronaldo, keep running at him and he’ll fold like a house of cards. Our midfield trio should have an advantage over the Ronaldo-Ronaldo axis on their side. We can climb out of hell together. One inch at a time.”

Hmm, interesting. What’s going on in the other dressing room, I wonder? 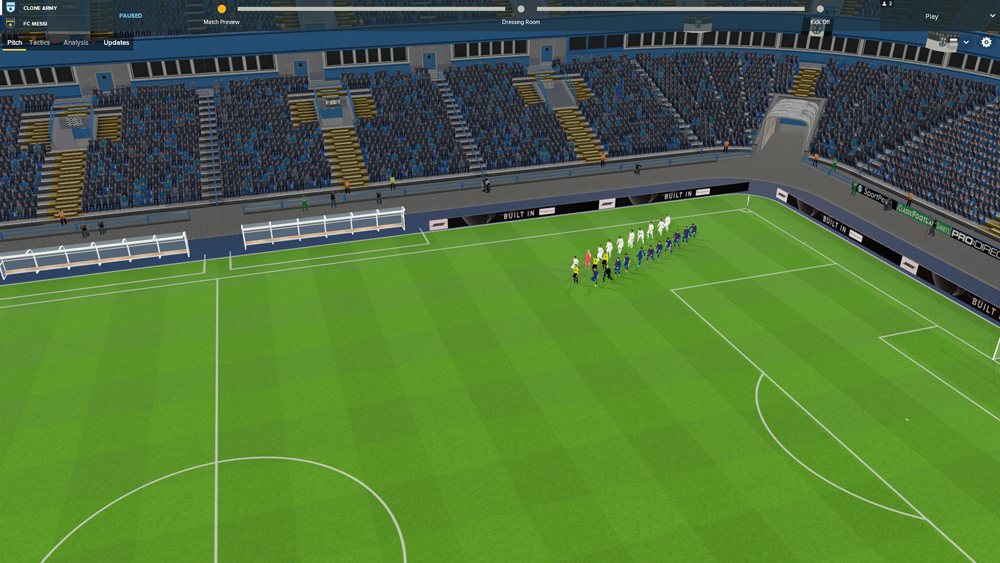 It’s quite a sight as the 11 pairs of these footballing titans leave the tunnel. The match is being hosted at the Santiago Bernabeu as the game doesn’t allow neutral venues for friendlies, and besides, who knows what the clone army would do if I denied them a set of adoring fans?

As the teams kick off, I get a chance to ponder some of the age-old philosophical questions mankind’s been struggling with for centuries: if a tree falls in a forest and no one is around to hear it, does it make a sound? If Cristiano Ronaldo passes the ball to Cristiano Ronaldo, is he being selfish on the pitch?

Then a goal happens. Then another. 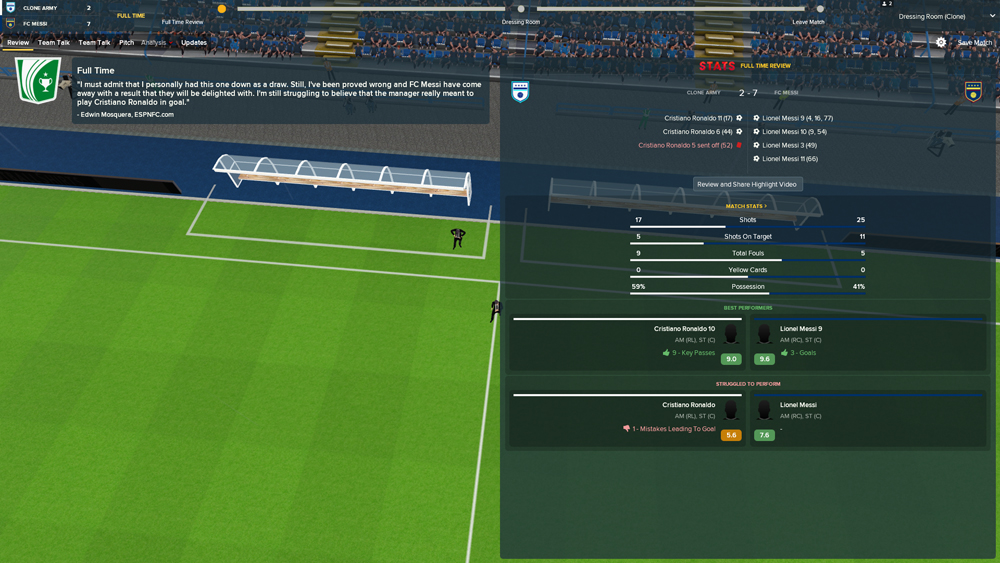 It takes a red card and a resounding 7-2 scoreline to realise that these footballing superstars are less adept at goalkeeping than my grandmother would have been at solving the Cuban missile crisis.

While it certainly makes for an entertaining blooper reel, it doesn’t exactly scream “valid scientific experiment” to the committee. We might as well sort out two disputes for the price of one and stick Manuel Neuer and David de Gea between the sticks and, well, see what sticks.

Ronaldo is pretty pissed that the integrity of his clone army has been compromised, but I try my best to explain that it’s for the better. In the end, we make De Gea’s purported dream move a reality and he joins up with the star-studded team in Madrid.

On the other end, Messi is quick to accept my decision. We forcibly remove Neuer from his holiday, then I set the clock back, restart the game and watch as the slightly less insane proceedings unfold.

It’s a much less farcical encounter this time around, despite my initial concerns after the clone army takes the lead inside seven minutes following a misplaced pass by one of the Messis in midfield.

It only takes FC Messi three minutes to reply, but then the game settles down. Eventually Messi scores a quickfire double, turning the game around in the first half before Cristiano Ronaldo #8 pulls one back.

The game’s complexion changes once they get rolling again: both teams become surprisingly cautious and cagey, with only a few highlights popping up on the match engine. Then disaster strikes for FC Messi. After one of the Messis suffers an injury, and with no substitutes available, they are reduced to ten men. 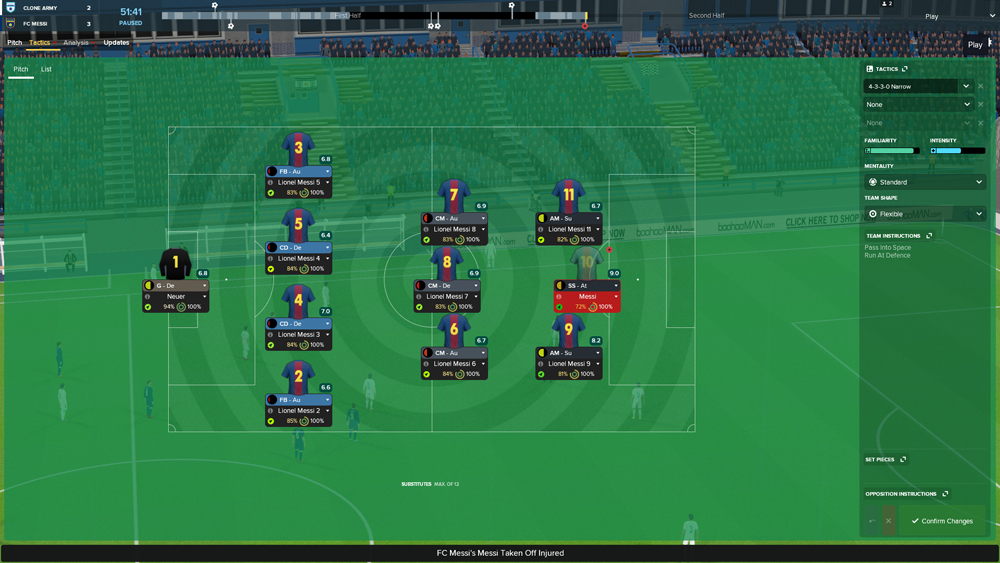 But Ronaldo’s clone army fail to capitalise on their numerical advantage – and they soon lose it as well, with Ronaldo joining his arch-nemesis on the stretcher.

At this point, the clones become more and more frustrated and the number of fouls skyrockets in the closing stages of a scrappy game. The scoreline remains unchanged, and the 11 Argentine maestros leave the belly of the beast with all three points thanks to an impressive first-half performance. 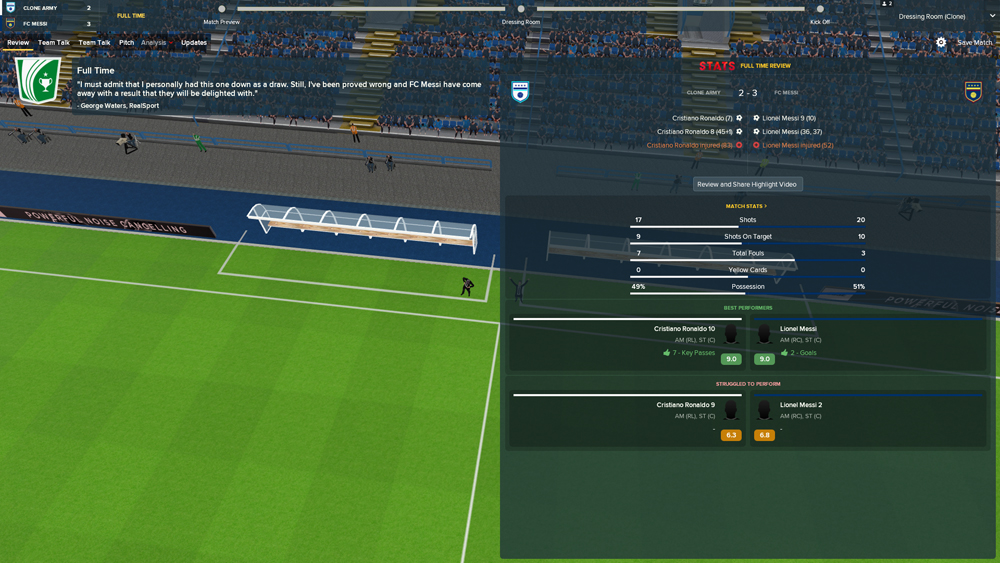 It ends 3-2 to FC Messi, who recorded convincing wins both with and without a dedicated goalkeeper, while also performing better against the minnows in their previous outing – a nine-goal gap and zero shots from the other side as opposed to a mere 7-0 victory.

I think we can finally put this debate behind us. Phew.