For the first time since this adventure began, there’s a sense of calm around Everton. We haven’t just wildly over-achieved and we haven’t just narrowly avoided relegation. A comfortable mid-table finish exceeded expectations and we’ve been promised that the stadium will be fixed over the summer. We’re slightly in debt and we’re only allowed to spend £700,000, but that should change soon when the TV money drops in. And so it is with a steady heartbeat that I assess my squad. And it’s not long before my pulse is racing again. 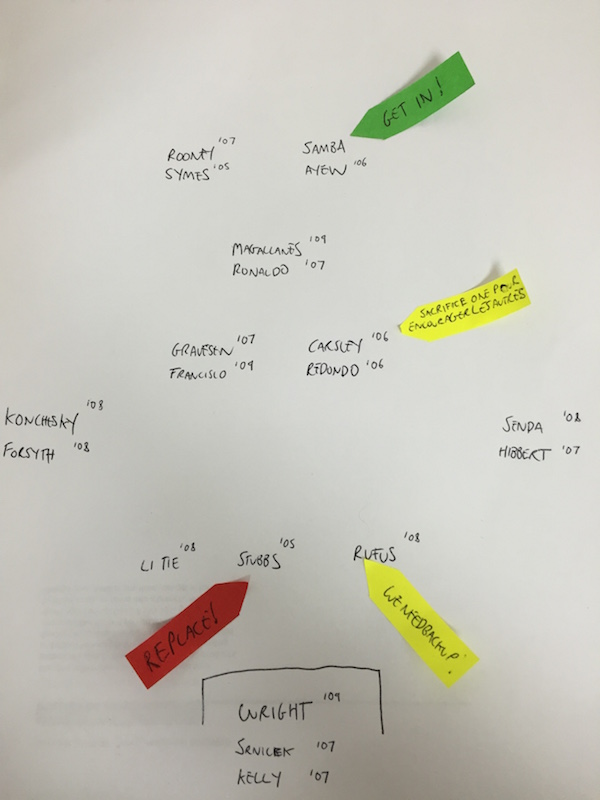 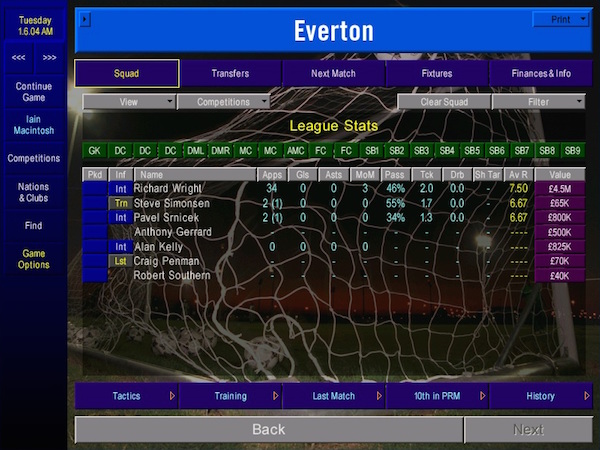 I have no complaints whatsoever about the goalkeepers. Richard Wright had the highest average rating in the league for his position and, though Trevor Francis prefers Tottenham’s Michael Oakes to go between the sticks for England, Wright is second choice. Behind him, dear Pavel Srnicek is an adequate understudy and Alan Kelly is competent and low maintenance as an emergency option. We could do with a youngster, but all the kids we’ve got are rubbish and I’m trying to rid myself of them. 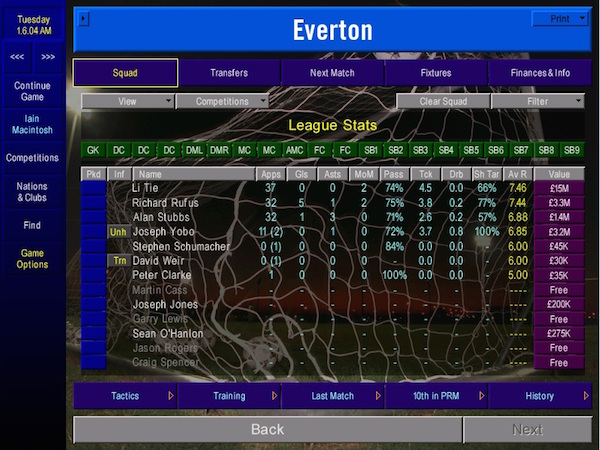 Defence is a real concern. Li Tie and Richard Rufus were two of the highest performers in the league last season, but Alan Stubbs is fading fast and Joseph Yobo just can’t seem to settle in any position. 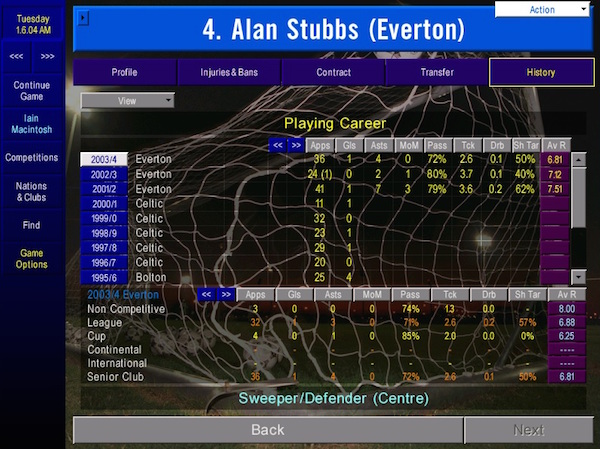 We’re losing a lot of the old guard this summer and there are no promising kids. With Yobo unhappy about his wages, yet offering nothing to support a claim for a pay rise, I’m very much afraid that he’s finished here. Stubbs, with just one year left on his contract, can stay as back-up. I just can’t bring myself to list him. It would be like shooting the family dog just in case it gets ill later. 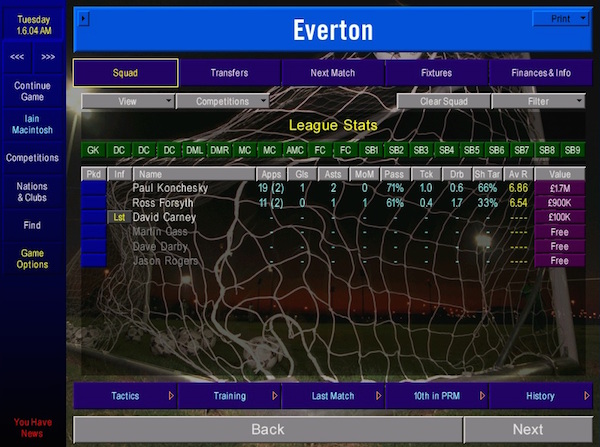 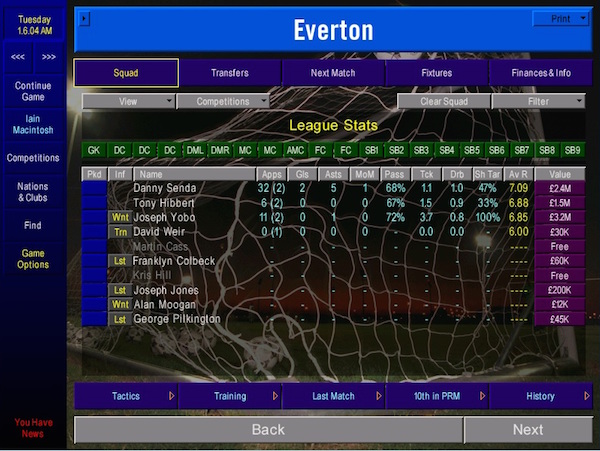 No real complaints here. I didn’t expect the young wingbacks to set the world alight in their first seasons. Danny Senda was terrific, but Konchesky wasn’t far off what I’d hope for from a senior professional. It’s something to keep an eye on, but I think we’re okay for now. 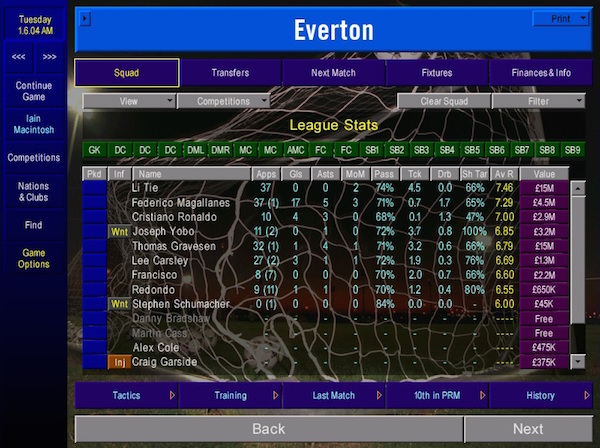 An extraordinary debut season for Federico Magallanes and lots of promise from Cristiano Ronaldo. There are two transfers that I doubt I’m ever going to regret. But it was a very disappointing year for the midfielders, even though the quality at our disposal was noticeably improved. Not one of the quartet managed to average over seven and poor Redondo could barely last ninety minutes. If we do get some spending money, we’ll be reinforcing this department as soon as we’ve improved the defence. No-one’s place in the team is secure. Fortunately for them, there’s no point in splashing out £700,000 when we might have several million in a couple of weeks. I can wait. 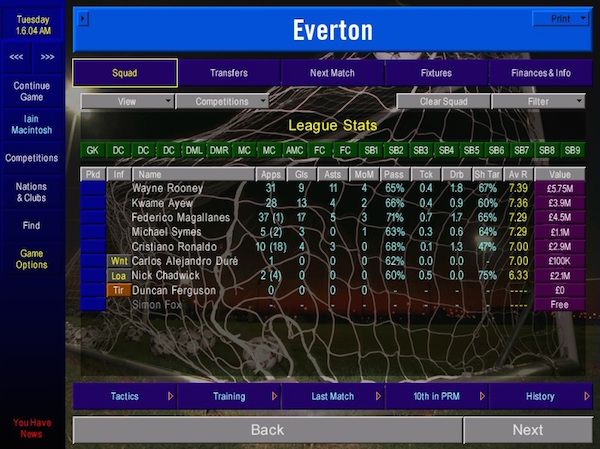 We await the arrival of Cherno Samba with bated breath, but he’ll have to hit the ground running to get in this team. Performances were high. Wayne Rooney stepped up as we hoped he would and Kwame Ayew continues to offer a regular supply of goals. Nick Chadwick will have to prove himself on loan if he wants another chance, but there will be a new contract for Michael Symes. I’m reasonably happy with this front line. 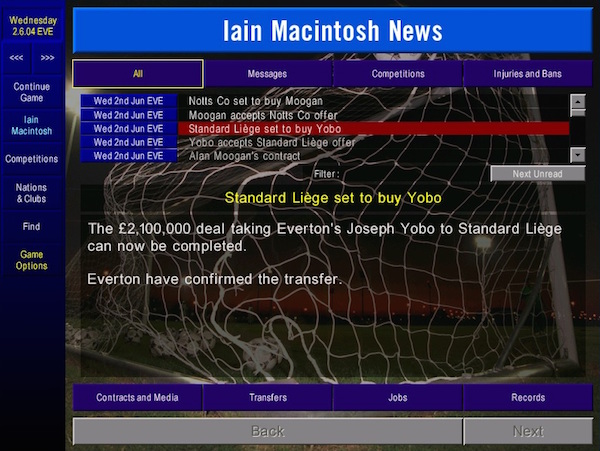 But it’s farewell to Yobo. £2.1m won’t arrive instantly, it’s in instalments, but it all helps. Hopefully, he’ll have more success back in Belgium than he had over here. I’m quite sad about this, I really thought it would work out. 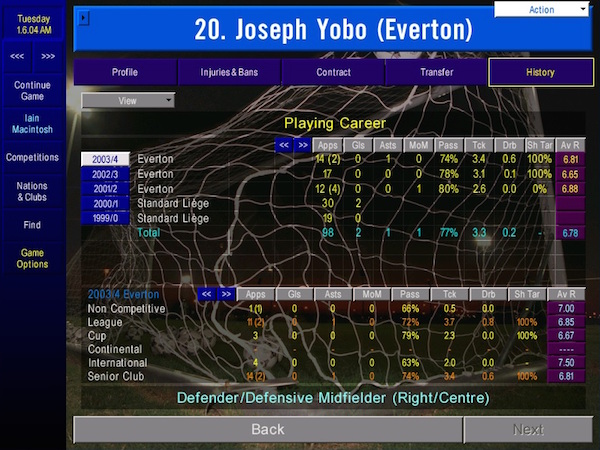 The 2004 European Championships are underway in Portugal and England make a stunning start, beating Germany by a single Michael Owen goal. Elsewhere, big Pavel puts in a fine performance as the Czech Republic beat Turkey. Petr Cech, still at Rennes, is on the bench. I shortlist him, just in case. 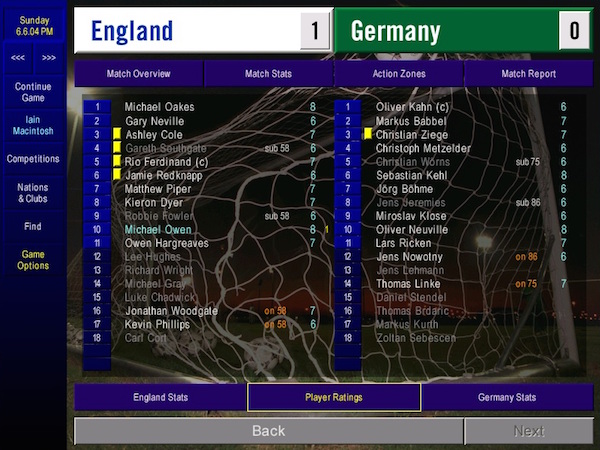 In our hunt for defensive back-up, we’ve been able to settle on terms for Avci Koray, a Turkish B international whose contract at Rizespor has expired. He’s averaged 7.5 over the past three seasons and, while his heading isn’t all that, he’s quick and strong, so he might make a useful spare man in the middle. Now all we have to do is get a work permit. 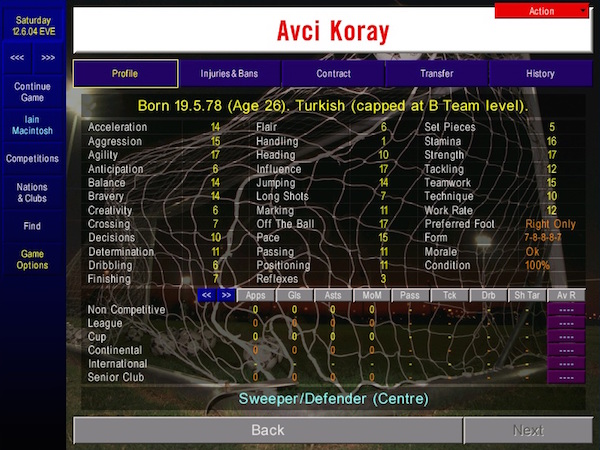 There’s another win for England in Europe, so Francis has achieved the bare minimum of progressing from his group. I have to admit, I didn’t expect that to be the case. That should secure his position for another two years, which is a shame as I’d have been interested in combining the two roles. I don’t know what’s more unlikely, winning silverware with Everton or England, but you have to try, don’t you? 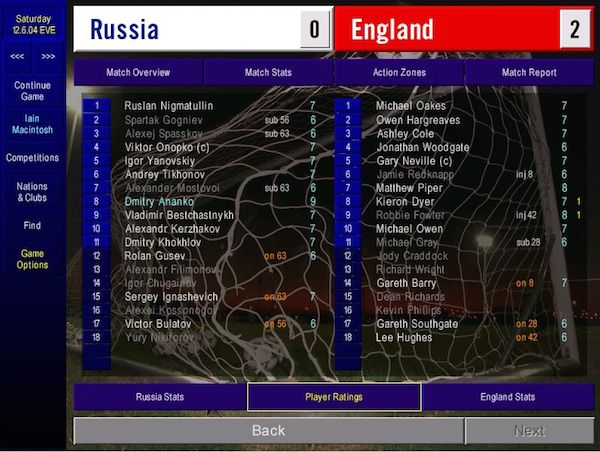 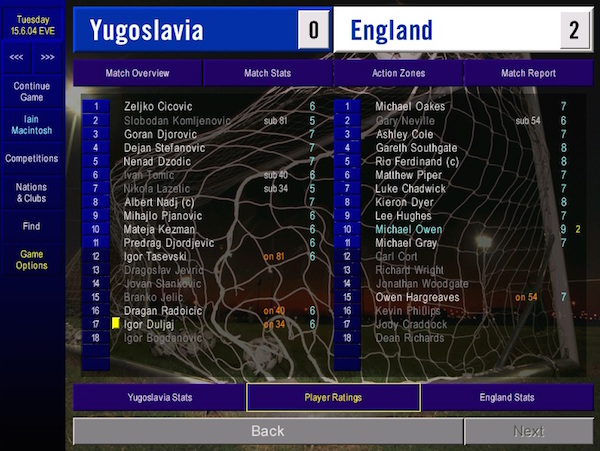 Weirdly, England don’t down tools at the first sign of security. They go on to beat Yugoslavia too. Francis has a golden generation here and they’re actually performing to expectations. This is quite a surprise. But not as much of a surprise as this… 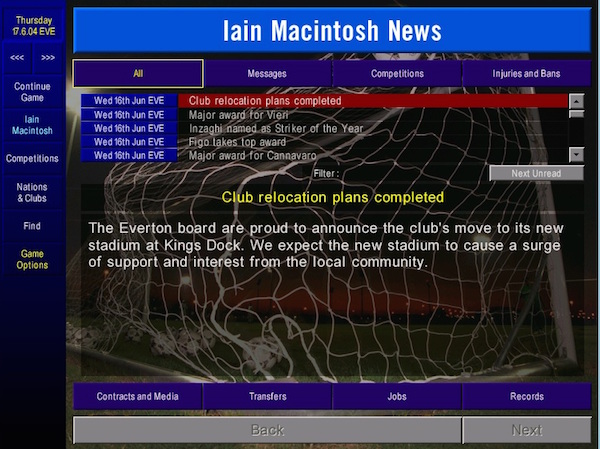 Incredible! I was under the impression that we were just going to get Goodison Park back, but we’ve got a whole new stadium! It’s got 55,000 seats, it’s got a retractable roof, it’s got undersoil heating! We’ve still got “awful” facilities, but surely that won’t last. I can’t wait for the 04/05 season to start. We’re back, baby! We’re back! 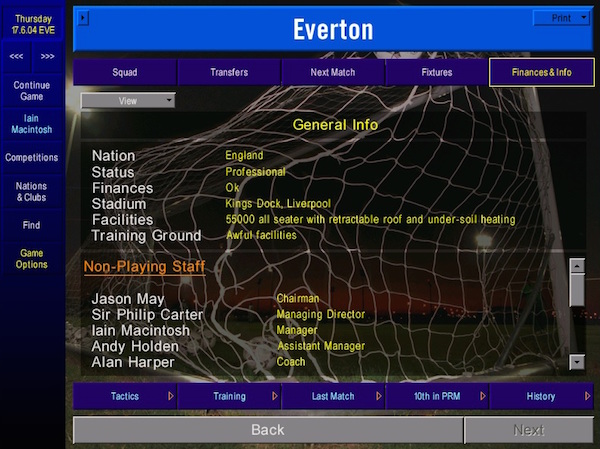