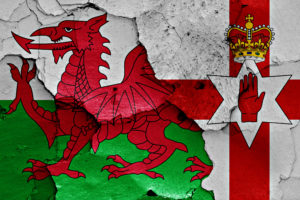 Wales and Northern Ireland have, for almost the first time in history, taken the eyes of the country off the England team.

Entering the finals of the European Championships for the first time in their respective histories, both teams defied the odds to qualify from their groups and set up this all-British tie in the round of 16.

Wales, however, achieved that feat in slightly more spectacular fashion.

Beating Slovakia 2-1 on the opening matchday secured their first ever win at an international tournament since 1958, which was unfortunately followed up by a dramatic, last-minute loss to next door neighbours England.

With every team still mathematically able to qualify heading into the final game of the group, only a win would ensure safe passage into the next round regardless of results elsewhere.

And win they did.

A 3-0 rout against a dreadful Russia side meant anything other than an England win against Slovakia would see them go through at the top of Group B and I think we all know how that finished up.

That victory meant they avoided runner up of Group F, Iceland, though the minnows left it late to leapfrog Portugal into second spot.

Instead, Wales are matched with their British counterparts Northern Ireland, who finished third in Group C, qualifying as one of the best third placed teams.

The Green and White Army did very well to hold their own in a tough group.

Their opener saw them narrowly fall to a 1-0 defeat to Poland, before securing their first ever points at a European Championship with a 2-0 win over Ukraine.

Even current world champions Germany only managed to squeeze one goal past Northern Ireland in the final game of the group stages and they went through by virtue of their goal difference.

Wales, however, have the edge over Northern Ireland in terms of ability and I can only see this civil war going one way.

Winner Sports
100% deposit match for new members
Betway
Northern Ireland to win and both teams to score at 12.00 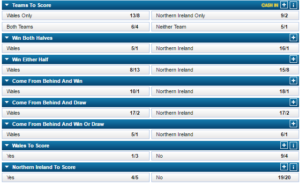 Hello all, It was a profitable weekend overall and another case of…