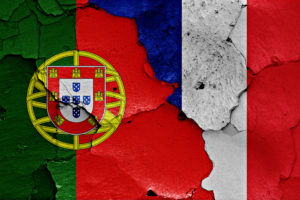 So here we are.

This year’s final matches up Portugal – a team that hadn’t won a game at the Euros within 90 minutes until the semi finals against Wales – with host country and top scorers France.

While on paper this match may seem to only be heading one way, Portugal have actually been very tactically astute at this year’s tournament, thanks in no small part to manager Fernando Santos.

A Seleção are unbeaten in their 13 games under the former PAOK manager and their last loss came against Albania in the first round of Euro 2016 qualifying matches.

But eight of their nine wins since Santos took charge were by a margin of one goal and their showing at the tournament has been underwhelming.

After drawing all three of their group games, Portugal qualified in third place before requiring 117 minutes of football to beat Croatia and penalties to get past Poland.

But it was against Wales in the semi finals where they really came out of their shell.

Set up to contain the threat of Gareth Bale, they restricted Chris Coleman’s men to just a few nonthreatening shots before two early second half goals in quick succession created a mountain that Wales were unable to climb.

For such an extravagant player, star man Cristiano Ronaldo has had somewhat of an understated tournament by his standards.

But the Real Madrid man remains a constant threat and his goals, though spaced apart, have been the main reason Portugal are one win away from clinching the trophy.

France will do well to contain his threat, however, despite some shaky performances, they have proven to be rather adept at keeping clean sheets in this year’s tournament.

Conceding just one goal in the group stages (in their opener against Romania), Les Bleus went behind to the Republic of Ireland before racing into a 4-0 half time lead against an Iceland side that won the second half 2-1.

But even though Dider Deschamps’ men were drawn against a very competent Germany team in the semi finals, an impeccable counter-attacking display saw France run out as 2-0 winners and confirmed the host country’s place as favourites for the trophy.

Antoine Griezmann has been the stand out player not just for France, but for the tournament as a whole.

The Atletico Madrid forward has scored 6 goals so far – three more than second placed Ronaldo – and is on course to walk away with the golden boot.

Buoyed by a huge home support and a string of impressive performances, it will take a lot to prise French hands off the trophy.

But Portugal have shown a great determination to get to the final and will not want to pass up the chance to end their unwanted record of playing the most games at the European championships without having ever won the competition.

Recommendation: First half under 0.5 goals at 2.25

Match to go to penalties NOW 5.00
Cristiano Ronaldo to score a direct free-kick NOW 17.00
Any current premier league footballer to score for France NOW 1.73
Both teams to score in both halves NOW 9.00 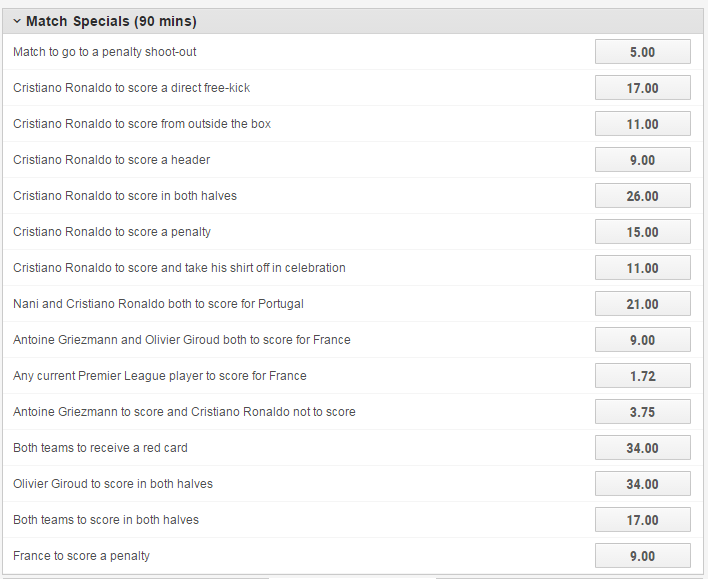