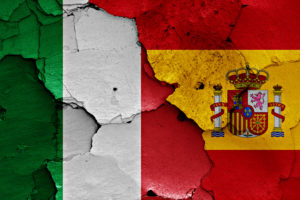 Spain’s swaggering approach to their group games was abruptly halted against Croatia.

Two points clear at the top of the table after scoring four goals without reply over two games, La Roja’s transition to the round of 16 was already confirmed.

And if they wanted to set up a tie against the best third-placed team from Groups B,E or F; all Vincente Del Bosque’s men had to do was take a point from a second placed – but Luka Modric-less – Croatia side.

Boy did they mess that up.

Croatia pressured Spain in a manner which they hadn’t seen in a long, long time.

They weren’t able to play their possession game with Croatian players nipping at their heels with every touch of the ball and, though they went 1-0 up just seven minutes in, a strong fightback against a shellshocked Spain side saw Vatreni run out as 2-1 winners, condemning Spain to second spot and a tie against Group E winners Italy.

La Roja had tasted their first defeat in 15 games at the Euros and conceded their first goal in 745 minutes of football, but the most worrying thing for Del Bosque’s men was that their system had been found out.

If Croatia held the key to unlock Spain, who else can do the same?

Against Belgium they contained, pressured and comfortably beat extremely talented side, while perseverance paid off in their frustrating game against Sweden when Eder found the net with two minutes remaining.

Against the Republic of Ireland Antonio Conte sent out an entirely changed starting XI, and although overturned by a spirited opposition performance it is this ability to treat each game differently that will stand them in good stead for Monday’s game. The extra rest for key players will help matters as well.

I’m sure they will have studied Croatia’s performance very carefully and if anyone can replicate it, Gli Azzurri can.

Winner Sports
100% deposit match for new members
Betway
Italy to win and both teams to score at 11.00