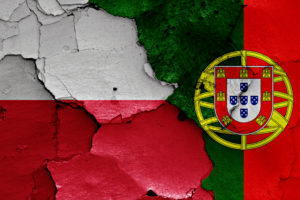 Neither side in this tie was able to win their Round of 16 game within 90 minutes.

Jakub Blaszczykowski gave Poland an early lead against Switzerland on Saturday, but a wondergoal from Xherdan Shaqiri pulled Vladimir Petković’s men level before Granit Xhaka’s missed penalty in the shootout saw the Swiss exit the competition.

It was the same Poland that we saw in the group stages – a good enough side to take a lead but not necessarily able to completely dominate an opponent and really secure a victory.

Luckily, in Portugal they face a country who have failed to win a match within 90 minutes at this year’s European Championships, yet find themselves in the quarter finals.

Their round of 16 match against Croatia was a turgid affair that only livened up after 115 minutes of football had been played.

Deep in to injury time of arguably the most boring game at this year’s tournament, Ricardo Quaresma headed the ball into an empty net from two yards out after Daniejel Subasic palmed Ronaldo’s shot into his path.

Unconvincing performances from both sides to set up this Thursday’s tie and, with so much more at stake, I can see this game being even more restrained than the last.