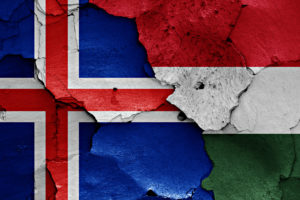 I don’t think anybody could have predicted that when Iceland and Hungary had to play each other they would be sitting in second and first place of Group F, respectively.

Iceland’s sensational first ever game, goal and point at a major tournament, in which they came from behind to draw 1-1 with Portugal, won them the hearts of everyone watching – not least because of how angry it made Cristiano Ronaldo.

Expected to crash and burn, Iceland now have no reason to look behind them and, with arguably the hardest group game out of the way, can genuinely push on for potential qualification.

Hungary also upset the odds when they thumped a 10-man Austria 2-0, making Group F possibly the most open and exciting of all of them.

This game would have been the one both managers would have marked out as ‘winnable’ and if Hungary do go on and win they will guarantee qualification for the next round for the first time since 1972.

A win for Iceland would open the group up even more and possibly even see Austria knocked out.

A real underdog story for both sides and, regardless of the end result, both teams can be proud of what they have achieved.

Expect an open game with plenty of chances as both sides go for it.

Recommendation: Both teams to score at 2.00

Betway
Hungary to win and both teams to score at 6.50
William Hill
Gylfi Sigurdsson to score from outside the area at 12.00 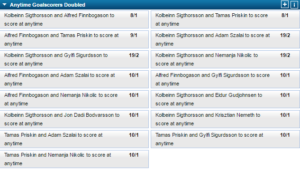 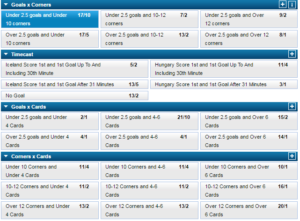