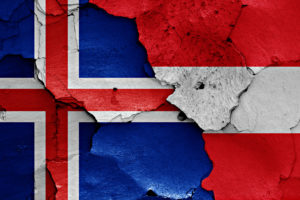 Quite the reversal of fortunes for these two sides.

Iceland – minnows qualifying for a major tournament for the first time in their 69 year history, currently sit second in their group, unbeaten in games against Portugal and Hungary.

Austria, on the other hand, were widely predicted to breeze their way through Group F.

Able to boast English Premier League, Bundesliga, Swiss Superleague and Ukranian Premier League winners among their ranks, they have hugely underperformed at this year’s tournament and languish bottom of the group, with no goals and just a solitary point from their 0-0 draw with Portugal to show for their efforts.

But Group F remains the most open at the tournament and all four teams are still able to qualify in all manner of permutations.

Austria can actually join Hungary at the top of the table on four points if results go their way, but if there’s a winner from the other game they will only be able to reach third.

Iceland, however, will be confident in their chances of reaching the Round of 16.

Just two points and two goals separate them from leaders Hungary making it mathematically impossible for the teams to finish equal.

And though they are level on points and goal difference with Portugal, goals scored means they sit above them and matching their result will see them defy the odds and qualify for the next round.

Austria have been so disappointing this tournament it would be unfair on Iceland if they suddenly decided to turn up for the final group game.

But football is a results business and Iceland will need to dig deep, and keep their eye on the other game, if they are to make footballing history.

Winner Sports
100% deposit match for new members
Betway
David Alaba to score anytime and Austria to win at 6.50
Winner Sports
Austria, Belgium, Italy & Portugal All to Win at 15.00
William Hill
Gylfi Sigurdsson to score and Iceland to win at 9.00