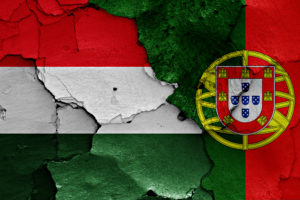 Who would have predicted that, by the time these two sides met on matchday three, it would be Cristiano Ronaldo and Portugal that have to win if they are to stand any chance of getting out of Group F?

A muted appearance at Euro 2016 has seen A Selecção score just one goal – Nani’s opener in their first game against Iceland.

A 0-0 draw against Austria – in which Ronaldo had a goal disallowed before missing a penalty – leaves them sitting perilously in third place of their group, equal with Iceland but behind on goal difference.

Group F has been by far the most open at this tournament and all four teams can still qualify as group winners, with a whole host of different permutations.

Portugal can win the group by beating Hungary with Iceland either drawing or losing. Matching Iceland’s result could see them go out the competition on goal difference and a loss will see them finish third or, if Austria win, bottom.

Hungary must be pinching themselves every time they look at the group table.

Two points clear heading in to the last match of the stage, unbeaten in two games and just one goal conceded in a group that nobody backed them to qualify from is a huge achievement for a team that entered the tournament via the play-offs.

Even a draw will see them qualify in first, or second if Iceland win by 2 or more goals. However, a loss could see them slip down as far as third if Austria win, though they might have already done enough to qualify from that position too.

Cristiano Ronaldo has cut a lonely figure on the pitch at times and often looks to be playing for himself rather than the team. He simply has to step up to the plate if he wants to reach the next round, but presumably Hungary are preparing to shut up shop.

If there’s goals in this there won’t be many, and a Hungary win wouldn’t actually seem out of place at this point in time.