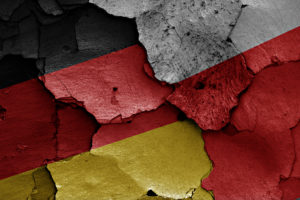 Boasting one win and one clean sheet each, the only thing separating these sides at the top of Group C is Bastian Schweinsteiger’s 92nd minute goal that made it 2-0 to Germany against Ukraine on Sunday.

The current world champions rode out as winners of that match, but the scoreline looks far more comfortable than the reality.

Despite taking an early lead, large periods of the second half were dominated by Ukraine and only a time-and-space-bending goal line clearance from Jerome Boateng prevented Yevhen Konoplyanka from equalising.

Schweinsteiger’s goal that sealed the win came off the back of intense Ukrainian pressure – a rapid counter attack saw Mesut Ozil sweep the ball into the 31 year old’s path for a well-taken tap in.

But being able to maintain a clean sheet and grind out a victory is the sign of champions and Germany’s pedigree and ability can not be underestimated.

Poland swept Northern Ireland aside in a match that seemed to be the exact opposite of Germany’s.

Adam Nawałka’s side’s 18 shots on goal went without reply until Northern Ireland’s two off-target attempts in the last half an hour.

Poland dominated, but only emerged as 1-0 winners.

They cannot afford to be as wasteful against a Germany team that will punish every mistake. If they are to get a result they will naturally look towards Lewandowski, especially with the striker playing against a side that could potentially feature five of his Bayern Munich teammates.

I think Germany may just have too much in the tank for Poland and, if they play to the level we know they’re capable of, should end up as comfortable winners.

A decade before Arsene Wenger won his first major trophy with Arsenal,…