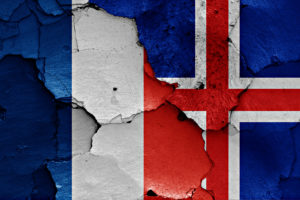 If you’d told French fans that their side would be matched up with Iceland in the quarter finals of this year’s tournament, most of them would have rubbed their hands together with glee.

Not so much anymore, however.

A string of performances way above everybody’s expectations in their first ever appearance at a major tournament have made Iceland one of the most feared teams at this year’s tournament.

An impressive, unbeaten run in the group stage saw them finish second to Hungary on goal difference in a group that also contained some real European heavyweights.

Draws against Portugal and Hungary were compounded with a sensational 2-1 win over Austria – a team that boasts title winners from four different European leagues –  to set up a quarter final tie with England.

Expected to walk all over a country with a population smaller than the city of Leicester, Iceland stunned the world by turning around a 1-0 scoreline four minutes in to eventually run out as 2-1 winners and dump Roy Hodgson’s men out of the tournament.

Not to be underestimated, Iceland’s success comes from years of funding and development of young Icelandic players before sending them in to major leagues around Europe.

It all comes together to create a squad that genuinely believes they can win every game, despite many of their players being part-timers.

France, on the other hand, need no introduction.

Also unbeaten, two wins in their opening group matches were followed up with a 0-0 draw against Switzerland.

Through as group leaders, they faced off against a Republic of Ireland side still angry over Thierry’s Henry’s handball that saw France qualify for World Cup 2010 at Ireland’s expense.

Despite also going behind in under five minutes, a second half double from Antoine Griezmann sent Les Bleus through to the quarter finals.

Didier Deschamps’ side are impressive if slightly unconvincing. Olivier Giroud continues to miss chances for fun and they have run many of their results close, relying on late winners to edge past the likes of Romania and Albania.

Much like Leicester’s ‘fairytale’ Premier League season, Iceland are writing themselves into the history books. But just as everyone expected Leicester’s bubble to eventually burst, it didn’t.

I worry for France if they go behind as Iceland have shown an excellent ability to hold and see out a result but Les Bleus, especially as host country, should be made of sterner stuff and this will probably be a walkover.