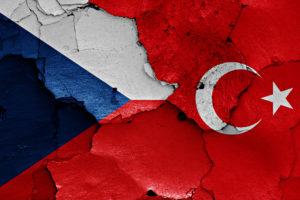 Turkey will want to forget Euro 2016 in a hurry.

Tipped to upset the odds in a difficult group before the tournament started, Fatih Terim’s men have been eliminated after only mustering up zero goals from 17 shots in two games, with just two of these on target.

Turkey’s poster-boy Arda Turan appeared on national television to apologise for his side’s 1-0 loss to Croatia, while the Barcelona man was in tears as he was booed off the pitch after another anonymous performance in their 3-0 loss to Spain.

Czech Republic, however, have been counting their lucky stars following a Great Escape from elimination against Croatia.

2-0 down, being comprehensively outplayed and staring an early exit from the competition in the face, Milan Skoda pulled one back for the Czechs with 15 minutes left on the clock.

Flares thrown on to the pitch by Croatian fans meant that referee Mark Clattenburg was forced to temporarily suspend the game.

And in the five minutes of injury time that followed, Croatia’s Domagoj Vida handled the ball in the area, allowing Tomas Necid to convert the resulting penalty and snatch an unlikely – and undeserved- point.

That priceless point not only kept them in the competition, but also leaves them within catching distance of Croatia.

Three points and two goals separate the two side, meaning a win for both Spain and the Czechs would potentially see Pavel Vrba’s men through to the next round.

Facing off against a downtrodden Turkey, with rumours of team spats floating around the Turkish camp, leaves Nároďák well placed to get the win required.

Qualification is not entirely in the Czech’s hands however, and anything other than a win for Spain will see them exit the competition.

Recommendation: Czech Republic win and under 2.5 goals at 4.33