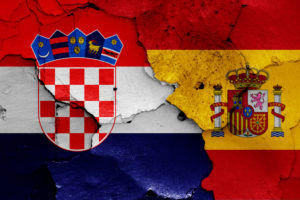 Croatia and Spain have arguably been two of this competition’s most impressive teams.

La Roja continue to steamroll any and all competition in their path,  crushing teams with slick goals before sitting back and controlling the remainder of the game – they are yet to concede a goal at this year’s tournament and have only faced three on-target shots.

Croatia, on the other hand, have been exciting but inconsistent.

A conclusive performance against Turkey in their opening game was one they walked away from wondering how it had only finished in a 1-0 victory.

And Friday’s match saw them dominate the Czech Republic for three quarters of the game, denying the Czechs so much as a sniff of their goal as they pressured and attacked relentlessly.

Taking a 2-0 lead, everything seemed to set for Croatia to confirm their qualification to the Round of 16, but Czech Republic pulled a goal back before crowd trouble saw the game temporarily suspended.

The stoppage time added on allowed the Czechs to win – and convert – a penalty, walking away with a rather undeserved point.

Croatia will feel hard done by, not least because they can now still be caught by the Czech Republic if they lose to Spain.

If Croatia can get a foothold in the game they may snatch a result but Spain will be unwilling to let go of top spot, especially when it’s Italy in the next round for whichever team finishes second.

Recommendation: Spain to score in both halves at 3.60