This season, The Set Pieces will be taking a closer look at German football. We’ve sent Archie Rhind-Tutt out there to immerse himself in German culture and to travel to games around the country. We’ll also be running matchday previews, interviews and features every week for all of your Bundesliga needs. Finally, club football returns after a tedious international break and we’re looking ahead to tonight’s game Borussia Mönchengladbach vs Hamburg. Let us know what you think by writing to us: [email protected]

What on earth has happened to Borussia Mönchengladbach? Following three consecutive defeats, The Foals sit rock bottom having made their worst ever start to a Bundesliga campaign, despite (mathematically) being the best team in the German top flight throughout the second half of last season. With injury problems mounting, unrest amongst staff and the small matter of a Champions League campaign to compete in, things aren’t looking so rosy for the side from North Rhine-Westphalia.

Taking a look at their recent results, it’s not difficult to see where their problems lie. Lucien Favre’s men conceded 26 goals in 2014/15, second only to Bayern Munich on 18, but have already conceded eight goals in three games. Granted, injuries to key defenders Martin Stranzl and Alvaro Dominguez haven’t helped their cause, but their much praised cohesive solidity of last season seems to have deserted them for now.

Not only have Gladbach struggled in defence, but in front of goal as well. Without being as prolific as the likes of Bayern Munich, Borussia Dortmund, Bayer Leverkusen and Wolfsburg, Die Fohlen have only scored two goals in three games. The club ethos is very much about unison, focusing on a team effort rather than one individual delivering the goods week in, week out. While this approach can strengthen morale and create a better balance within the squad, when the team is misfiring as they are now, there is often a lack of individual quality to create that something special to win you matches. Ahead of tonight’s match, Favre will be looking to the likes of Josip Drmic, Raffael, Thorgan Hazard and Ibrahima Traore to step up and make a difference in the final third to get the side back on track.

Some good news on the injury front for Die Borussen is that Andre Hahn and Martin Stranzl, who has been out since March with a knee injury look set to return. Hahn’s pace and physicality will be welcomed going forward, while Stranzl brings experience and familiarity to a back four that has been chopped, changed and all over the place thus far. Unfortunately for Gladbach, the returns of Hahn and Stranzl are matched with injuries to Patrick Herrmann and Fabian Johnson, not to mention the suspension of Granit Xhaka after his sending off against Werder Bremen a fortnight ago. They can’t catch a break. Here is a potential Borussia Mönchengladbach line up: 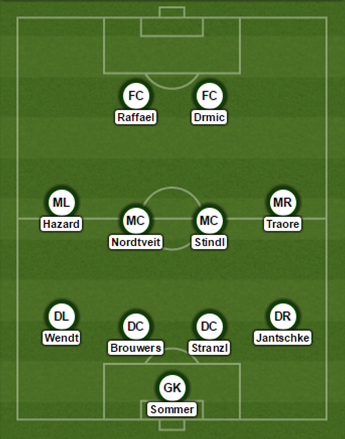 There’s never a dull moment in Hamburg. After being destroyed at the Allianz Arena, they then won at home to Stuttgart in extraordinary late circumstances before losing to Cologne after going 1-0 up before the international break. It hasn’t been an ideal start, but hey, at least they’ve actually got some points on the board. Bruno Labaddia’s men are likely to be in another relegation battle this season, but if there was ever going to be a good time to play Gladbach it would be now.

Of late, Hamburg have struggled to put the ball in the back of the net, still one of their biggest problems. Last season, they managed to score 25 goals which was the lowest amount of any team in the Bundesliga, but there have been signs recently that their fortunes could be changing. The hard working Sven Schipplock is leading the line well in the absence of Pierre-Michel Lasogga, in addition to Ivo Ilicevic and Lewis Holtby looking full of energy and determination with points to prove. Albin Ekdal, their summer signing from Cagliari has also been a really positive spark in midfield.

In terms of team news, Hamburg will be boosted by the likely return of their captain Johan Djourou who missed last their last game due to a muscle fibre injury. New signing Aaron Hunt could also make his debut for the club, which could see Holtby dropping to the bench and understandably feeling hard done by. Die Rothosen share their opponents injury luck with Rene Adler and Artjoms Rudnevs both ruled out, and they will also be without their experienced centre half Emir Spahic after his bizarre sending off against Cologne. Here is a potential Hamburg line up: 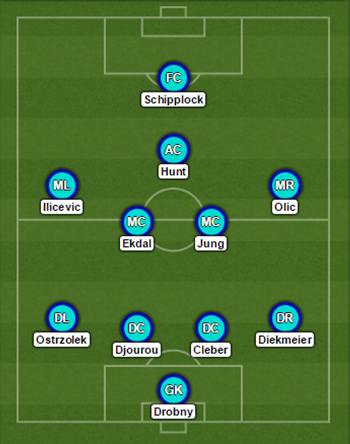 History doesn’t bode well for Hamburg, as Gladbach are undefeated in 10 of their last 11 matches against The Dinosaurs in all competitions. Not only this, but they’ve also failed to win 27 of their last 30 away matches in the Bundesliga. In spite of this, Lucien Favre & Co will be nervous having lost their last three, and should they lose again tonight it will be the first time ever that a team has started their Bundesliga campaign with four straight defeats. In terms of talent, The Foals have the far superior squad but Hamburg might fancy their chances tonight at Borussia Park, and they will certainly be looking to kick Gladbach while they’re down.

For more details on the Bundesliga, check out their website here.