Another game, another two goals for Javier ‘Chicharito’ Hernandez. They didn’t want him at Manchester United, but they can’t get enough of him at Bayer Leverkusen. It’s 13 Bundesliga goals for the season for the Mexican striker now, in just 16 games.

Leverkusen fan Ingo certainly loves him. He wore a club shirt, a club hat, two club scarfs and a denim jacket with around twenty Leverkusen patches sewn on. He likes Leverkusen. A lot. Standing under cover outside the stadium, he unequivocally told me that Hernandez is the club’s best signing in the last ten years.

I spoke to Mexican journalist Hecko Flores. Even he raised an eyebrow at that claim, but Hernandez’s local popularity was confirmed by what seemed like every Leverkusen fan passing by with his nickname plastered across their back. Though the moniker ‘Chicharito’ may soon be upgraded.

Hecko says that his fans back home have been calling him Chichadeus which means “Chicha God”. He has quite a few fans as well. In September, when Leverkusen announced that his shirt was available to buy from the club shop, the server went down under the demand. Such is his following in North America, the viewing figures for Leverkusen’s games on American TV have trebled since his arrival. And while Twitter followers aren’t everything, Hernandez has six million of them, second in the Bundesliga only to Xabi Alonso.

Despite that, Hecko says he’s always been a humble player. “It doesn’t matter if he scored a brace, a hat-trick, if he scored five goals, he always goes back and refers to the team.”

And he doesn’t look for excuses either. It’s not ideal to play a game after a 7,300 mile round trip and only two hours sleep, but when you’re Hernandez, it’s no problem. In November, despite a journey of epic proportions having played for Mexico, Hernandez scored twice for Bayer Leverkusen in Frankfurt.

But having passed through Manchester United and Real Madrid despite scoring goals for both, is he too nice a guy to be a top level striker?

“In part he lacks that sort of arrogance that a world class striker normally has,” says Hecko. “However, I don’t think it’s a bad thing that he doesn’t have that arrogance. I think it’s helpful for the team,” says Hecko. With 21 goals in 24 games in all competitions, Leverkusen fans would certainly agree with that. And all for the bargain price of €11 million.

His success has put a positive spin on an otherwise average season for Roger Schmidt’s team. They were knocked out of the Champions League in December and would expect to finish in the top four, but they’ve been skirting its fringes this season. It was only this weekend that saw them move into it for the first time since Chicharito’s arrival.

They were playing Hannover, the team bottom of the Bundesliga, but that fact shouldn’t undermine Hernandez’s performance. Equally, while he netted twice, there’s more to his game than just scoring, particularly in what he gives to the team.

As hulking Hannover defenders approached, the diminutive forward was able to hold the ball up before returning it to a team-mate. If not, then it was plan B as he turned the defender and at the very least, earned a free kick. You could count five different occasions that Hannover were caught out before fouling Hernandez.

Each time he did, the Leverkusen season ticket holder to my right applauded. Felix is a 24-year-old student from Leverkusen. He’s been coming to watch them for 19 years. “Clever!” he remarks after Chicharito won another free kick in the second half. By this point, Leverkusen were already a goal up thanks to a header by Stefan Kiessling from a corner. “We never score from set pieces!” exclaimed Felix but after half time, they’d do so again when fan favourite Kiessling was brought down for a penalty.

The ball made its way into Hernandez’s hands at the BayArena. Back in August, it did so as well in his final game for Manchester United. If you head just over 200 miles west of Leverkusen, across the border you’ll eventually reach Bruges in Belgium. That’s where Hernandez’s career with Louis Van Gaal’s side came to an acrimonious end.

Manchester United were 7-1 up on aggregate in their Champions League qualifier against Club Brugge. The game was over but not for Chicharito. Nine minutes from time, he slipped as he took a penalty and the ball trickled wide of the right hand post. Manager Louis van Gaal glared at Ryan Giggs on the Manchester United bench. Hernandez had missed his chance and five days later, he moved to Leverkusen.

It’s not a deal that has reflected well on United, especially when at one point in December, they had only scored 10 goals in their last 12 games. Hernandez, in the same period, had scored 15. 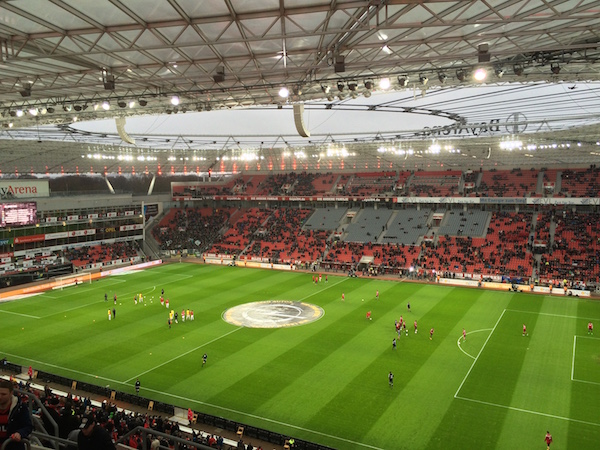 On Saturday, he went for the same spot as he did in Bruges. This time, he found it. Two nil to Leverkusen and off darted Hernandez in celebration where he ended up just a couple of yards away from two Mexican flags in the stands before being mobbed by his team-mates. He’d return to that corner of the stadium once again three minutes before the end. Even after he received the ball 25 yards from goal, the outcome looked inevitable.

One-on-one with Hannover defender Marcelo, two speedy stepovers followed before he scooted left, past Marcelo and fired beyond Ron-Robert Zieler in goal. Three nil to Leverkusen and a 19th goal in Hernandez’s last 16 games for Leverkusen. Felix was pleased. As the players joined hands and celebrated with the fans at full time, he joins the shouts of “Chicharito” before they then encouraged the players to strip Bayern of their lederhosen in their game this Saturday.

Hernandez was quoted in German magazine SportBild last week that it didn’t matter in football if you signed for ten or twelve years and then extended your contract further – everything can change in six months. On Monday, the club’s marketing and communications director Jochen A. Rotthaus said they needed to make the most of the Chicharito effect but at the same time, they needed to prepare for a time after Hernandez. That may be coming soon but what is clear – Hernandez is very welcome in Leverkusen right now.