The German love affair with bratwurst is hardly a secret. The more adventurous prefer it with the moorishly tasty accompaniment that is curry sauce. With that, you create currywurst, an exceedingly popular mixture. It’s claimed to have originated in Berlin, but by staying in the state of North Rhine-Westphalia (NRW), I was told I could sample something special by heading to Bochum in the Ruhrgebiet.

Bochum is a city flanked by a large football club either side of it, Schalke to the left and Borussia Dortmund to the right. Wedged between these two fierce rivals is the lesser known second division outfit of VfL Bochum – my destination for football on Tuesday and a special club in the rich tapestry that is German football, as Ronald Reng will have you know in his book Matchdays.

In the seventies, this was a side that became a byword for the outsiders, who were always snapping at the heels of the big boys. In a country where the fans bring so much, Bochum should be noted as the birthplace of Germany’s first football fan club. And such was the way VfL avoided relegation from the Bundesliga, a new word was created to describe them nearly 40 years ago – “unabsteigbar” i.e unrelegatable in English.

That stuck until 1993 when they went down for the first time and since then it’s happened another five times. Not so “unabsteigbar” after all then. This season, under the eccentric Dutchman Gertjan Verbeek, they had roared to the top of the second division with five wins from their first five games. However, they only won one of their next seven and have slipped down to fourth.

Bochum are not quite as big a club in stature as Kaiserslautern, their opponents from the south on Tuesday. They were Bundesliga champions twice in the nineties with a stadium holding 50,000 – not bad for a city of only 100,000 people. Before I could see either them or Bochum in action though, I had urgent business to take care of in the city centre. 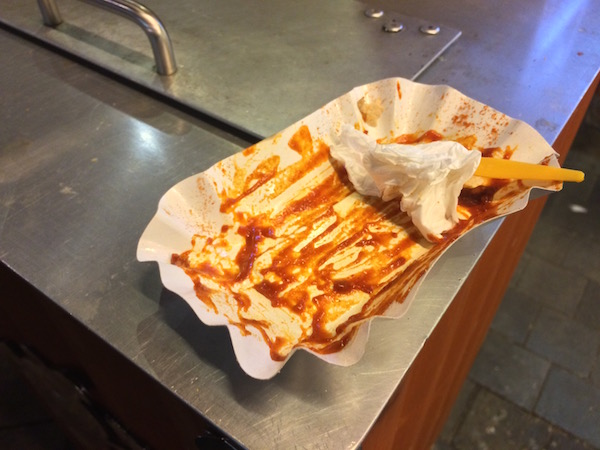 After an overwhelming number of recommendations, well, four to be exact, I headed straight from the train station to the Bratwursthaus. Before stuffing my face though, I found a VfL Bochum fan in the queue by the name of Claudia along with her other half, Hans-Norbert.

He’s a Schalke fan but he wore a Bochum scarf. It seemed Claudia hadn’t given him much choice in the matter. The evening got worse for him when Claudia didn’t hesitate when describing who she disliked more out of Schalke and Dortmund. For her, it was definitely Schalke. Hans-Norbert wasn’t best pleased but he looked more offended when I told him a little later that you can’t drink beer in view of the pitch in English stadiums. 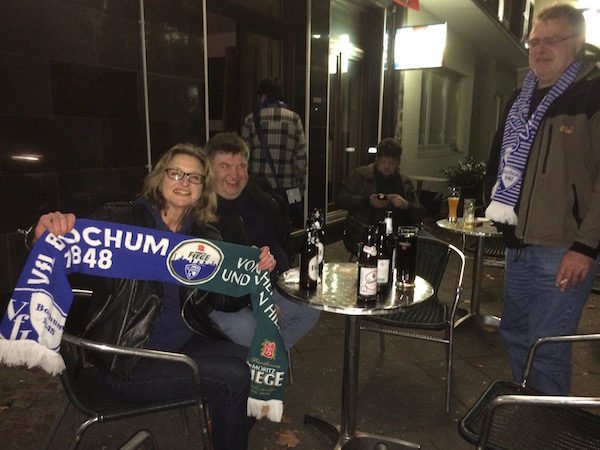 Our conversation continued outside of Claudia’s usual pre-match haunt, Oblomow, where after I was handed a beer, she then explained more about Bochum’s working class roots, where mining was once king and how VfL was still very much a workers club.

More regulars arrived at the bar, the most colourful of which was Ingo, distinguishable by the four blue and white Bochum scarves draped around him. That and a dodgy moustache. And the way he blew cigarette smoke in my face. He was lovely.

Whilst studying there 30 years ago, Claudia remembers the feeling of drifting up the steps in Bochum’s Castroper Straße stadium for the first time. “The green of the pitch, the noise from the fans, the glow of the floodlights – from there, I was hooked.”

I could see what she meant about the floodlights as I made the mile long trudge up the hill from the bar. If you’re heading to a night game in Bochum, you don’t need a map – just follow the glow. There, at the top of the hill, in its spaceship majesty, stands what the club call the Rewir Power Stadion but what the fans still call the Castroper Straße Stadion. 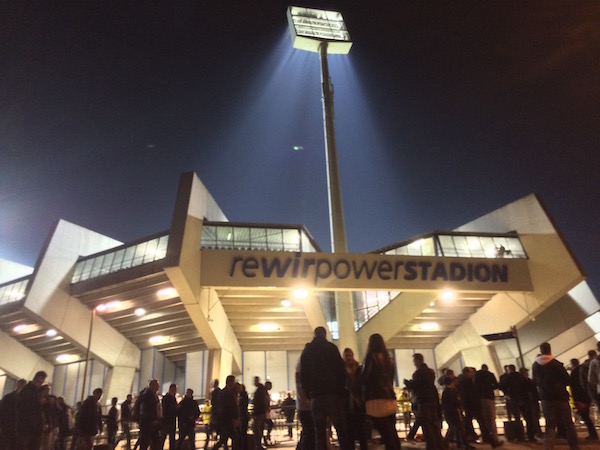 At just under 30,000 capacity, it is not the biggest stadium, but there is still charm to be found here. The almighty atmosphere which first drew Claudia in is still very much there, even when was two thirds full, as I discovered on Tuesday night. It’s enhanced by the deafening PA system which will have your ears ringing as much as the sounds made by the fans.

The game meanwhile was characterised by mistakes more than excellence. The biggest error of the lot came from visiting defender Chris Löwe just over twenty minutes from the end. He headed past his own goalkeeper to give the home side a deserved berth in the next round. For a club like Bochum, it was a significant win with a place in the third round earning them just over €500,000. 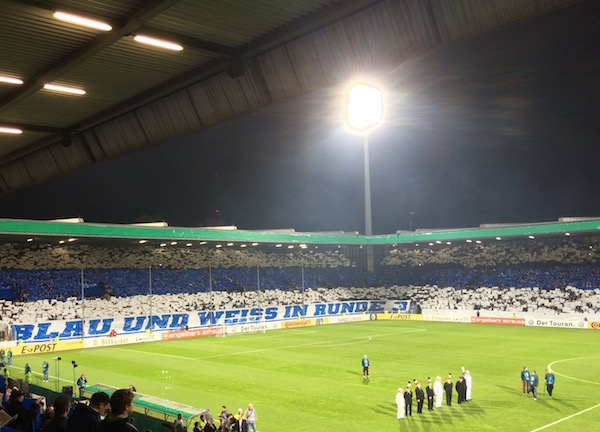 There weren’t many star performers from either side but former Arsenal and Fulham midfielder Thomas Eisfeld did impress. We catch up in the Bochum tunnel, designed like a mineshaft to pay tribute to the city’s roots.

Eisfeld had looked comfortable in the Bochum midfield on his first start of the campaign. It’s an important one for him too after his career stalled in England with little time on the pitch. He believes though that the German second division is more technical than England’s equivalent and that will suit him better. He prefers the atmosphere in Bochum too which he puts down to Germans being more emotional.

On my way back to the station, I also found out, again, how hospitable Germans are. With minutes to spare before catching the train back to Cologne, I strode past Oblomow where Claudia and her fellow “Bochumer” were celebrating victory. They stopped me, only to thrust a bottle of beer into my hand for the journey back. So if you’re after currywurst, hospitality and a decent atmosphere, you might want give to VfL Bochum a try.